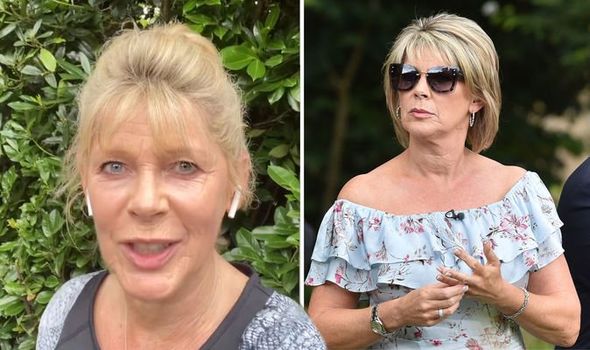 This Morning presenter Ruth Langsford began the Couch to 5k programme back in April, where running sessions get longer each time in a bid to build up fitness. Earlier this month, the 61-year-old took a break from the exercise due to suffering from “back strain”.

Today, she attempted to run again, but admitted she gave up halfway as she was “struggling”.

In view of her one million followers, she said to the camera: “Epic fail today, I just wasn’t feeling it.

“I said I was nervous, I was really struggling, I couldn’t get my breathing right.

“I got halfway and said I can’t do it anymore, I think I stopped soon after that.

“I just walked, I tried to walk briskly.”

Ruth said she was “disappointed” by her efforts eight weeks in, but put it down to not running for a while.

“These things happen in life. We’ll try again,” she added.

One wrote: “So frustrating isn’t it! Same thing happened to me at week 8 – keep going, you’ve doing amazing so far.”

A second commented: “Never a fail Ruth, you were out there building stamina, energy and getting fresh air. I think you’re fab so don’t be so hard on yourself.”

A third added: “Stick with it Ruth, same thing happened to me at week 8 and l gave up which l bitterly regret! Xx.”

Earlier this month, the mother-of-one was inundated with well wishes as she revealed she had injured her back.

She said at the time: “Picked up a bit of a back strain so haven’t been running this week… brisk walking with my BFF @hungrywomancooks & Maggie today.

“Breaking into a little trot occasionally (esp when it rained!) Will be back on @couch_2_5k Week 8 as soon as possible.(sic)

“Hope you’re all doing well wherever you are on the programme… keep at it! #runwithruth #couchto5k.”

“Look after that back Ruth,” one fan commented.

A second added: “Take it easy Ruth. Rest is good. You’ll be back in no time.”

The presenter suffered from three slipped three discs in his back, which left him in so much pain that he couldn’t sleep.

She recently told OK! Magazine: “It’s a slow process. He’s just carrying on with his physio and putting the work into that. It’s very difficult when someone is in pain because it’s hard to help them.”

But, the presenter added he was getting better as they set to return to This Morning next week.