OK ordinarily everything disgusting about Sean Hannity is coming out of his mouth. This time it was… kind of headed toward it! *shiver*

The Fox News host was about to cut to commercial Thursday night, teasing upcoming topics like the Jurnee Smollett scandal and the college admissions scandal — basically any story which he could report in such a way to reinforce the notion of everyone in Hollywood being corrupt while being a political show completely ignoring the fact the president’s campaign manager has already been sentenced to more than seven years for fraud.

Paul Mana-who?? Oh, the judge said this case wasn’t about collusion, and that proves there’s no collusion, now back to these actresses…

Well, self-awareness may not get through the bubble, but something did. Because Hannity had a HUGE BUG crawling on him the entire time!

It starts on his collar and just… moves… up…

You figure any second he’s going to notice and swat it away or something but it never happens! Ew! Watch!

Man, how does he not notice? And what does he mean by handled?? Ewwww!

Is anyone else picturing the cricket guy from Hellraiser? 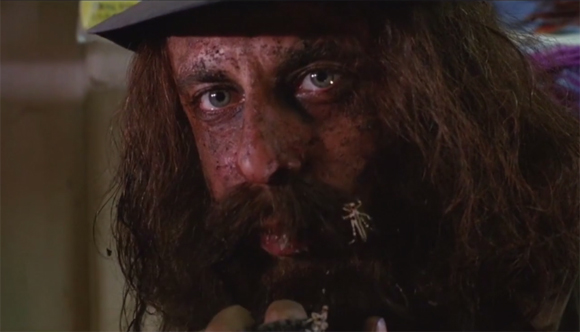 LOLz, it’s almost as if it was attracted to the B.S. pouring out of Hannity’s maw.

Or maybe with all the sponsors who left him over his defense of accused underage sexual predator Roy Moore, his lies about the Parkland school shooting, and his propagation of a false conspiracy theory about a murder victim…

OMG how is he still on TV at all?

…he just hasn’t had the extra funds for a good exterminator?

Oh man, now we’re going to have this stuck in their heads all day…

Well, Hannity may not have noticed, but viewers did — and the moment quickly went viral on Twitter. See some of the best responses (below)!

Can anyone imagine anything more gross?

Well, aside from the content of Fox News we mean?

In all seriousness, it’s easy to forget with so many scandals, but recent reporting shows Fox News actually does more than just act as cheerleaders for Donald Trump; they’re a full-on propaganda network that may have KILLED the Stormy Daniels story before the election in order to swing it for their guy!