SEBASTIAN SHAKESPEARE: Don’t smile… or it’s on your bike! Jeremy Vine says he was warned not to be seen looking jolly in public in the wake of BBC pay row

Ebullient broadcaster Jeremy Vine achieved notoriety when it emerged that his BBC pay dwarfed that of his colleagues — £700,000-£750,000 in a single year.

But only now has it emerged quite how sensitive the Beeb’s bigwigs were once this became public knowledge.

Indeed, I can disclose that they went as far as giving Vine — an unmissable figure with size-12 feet and standing 6ft 4in tall — specific instructions about how he should disport himself in public.

‘I said to somebody “How bad is it?”,’ says Vine, recalling how he asked where he stood in the pecking order of BBC pay. 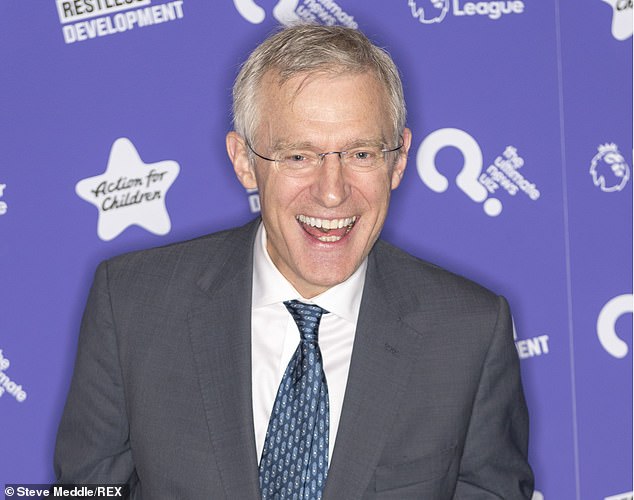 Ebullient broadcaster Jeremy Vine achieved notoriety when it emerged that his BBC pay dwarfed that of his colleagues — £700,000-£750,000 in a single year

Vine, who managed to rein in his smirk, says that his BBC handlers did allow him to make one key decision for himself. ‘I had to decide whether to be on the air the next day,’ he remembers. ‘“Of course I am going to be on the air. Why wouldn’t I be?”

That was exactly my thought. But somebody said to me, “Look, a few of the presenters are not going to be around.” I said, “Well, of course I am going to do my show.”’ 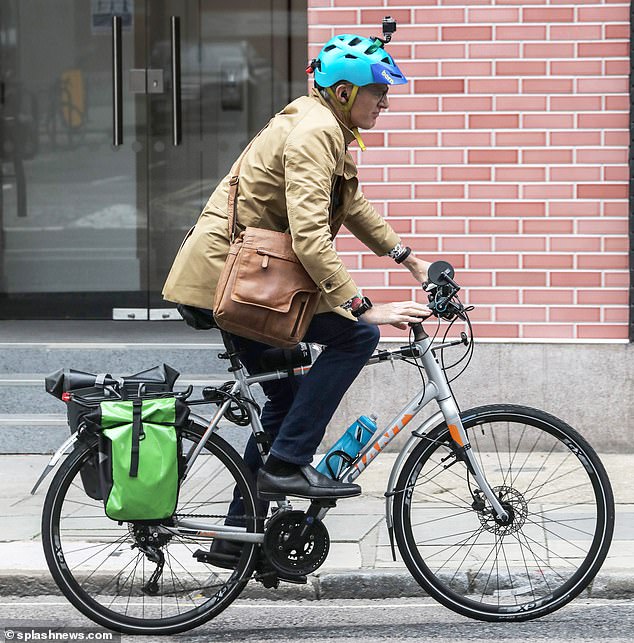 The result was that he ended up interviewing ‘the guy who ran radio’, former Labour minister James Purnell. ‘It’s the most bizarre interview of my career. “How can you justify paying me this much just to read out emails?” Only in the BBC…’

Vine’s mammoth pay packet resulted, he says, from notching up no fewer than five jobs: Points Of View, Panorama, Eggheads, general election graphics and his duties as a Radio 2 presenter.

But his agent helped. In one memorable exchange, he told the BBC to ‘stop treating [Vine] like a chattel and pay him properly . . . Stop saying there is no more money as there is money for whatever you want it for, just find it and stop treating Jeremy Vine like a child, as he is sick of it now.’

Sir Elton John got all emotional after being reunited with a special friend.

The singer hosted lunch at his home for Hollywood star Taron Egerton, with whom he struck up a friendship when the 30-year-old played him in his biopic, Rocketman, last year.

Sir Elton, 73, shared a picture of their first meeting since January. ‘Lunch in the garden with this lovely man,’ he captioned it. ‘We haven’t seen each other since the Golden Globes. Love him so much.’

The feeling is very much reciprocated. After working together on the film, Welsh-born Taron admitted: ‘We really sort of fell in love as friends.’ 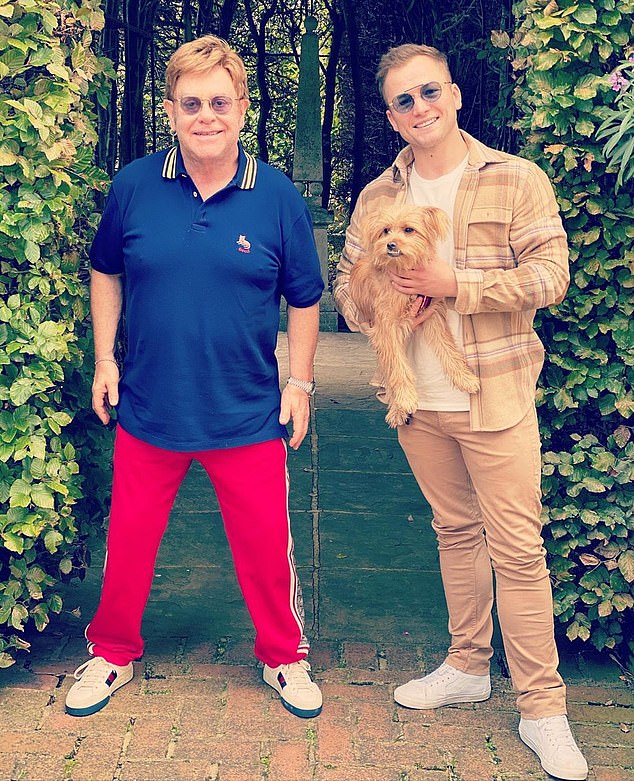 Princess and her property heir beau push boat out in Venice

Venice might be awash with Hollywood stars at its annual film festival, but it’s also proving the perfect backdrop for the unfolding of a real-life royal romance.

Just weeks after the Daily Mail Diary disclosed Prince Charles’s goddaughter, Princess Maria-Olympia of Greece, was dating one of Britain’s richest aristocrats, property developer Peregrine Pearson, the couple are enjoying a sojourn in the city.

Olympia, 24, who grew up in Chelsea and is the only daughter of Crown Prince Pavlos of Greece and his wife, Marie-Chantal Miller, was in sartorial step with her new man as he matched her blue dress with a T-shirt of the same colour.

Perry, 25, the son and heir of the 4th Viscount Cowdray, whose family has a reputed £224 million fortune, took in the sights with Princess Olympia before they enjoyed a boat ride along the Grand Canal.

Having jettisoned her long-time partner Nick Vyvian for married actor Danny Webb, Jane Horrocks embarked on what she calls a ‘gap year’, holidaying in exotic climes in the company of two handsome, much younger male co-stars.

The Lancashire-born star took advantage of filming breaks on location in Malaysia for her new period drama, The Singapore Grip.

‘I had a lot of free time. I went to Vietnam, Cambodia and Borneo. I got to do my gap year, basically, at a very late age.

‘It was not a solo adventure. I went with Luke Newberry, who’s my son in the show, and Nicholas Agnew [who plays Nigel Langfield]. I nagged them on a daily basis, so they were ground to submission in the end. We had a brilliant time.’

Awards shows are distinctly less glamorous in these locked-down times. Maggie O’Farrell, named winner of the £30,000 Women’s Prize for Fiction for her historical novel Hamnet at a virtual ceremony last night, says: ‘I’d just been cleaning up wee from a small whippet dog when they told me by Zoom that I’d won. I was about to put my pyjamas on. It still hasn’t really sunk in at all.’

The author was talking about her deserved victory, not the canine emission, I’m assured.

No soggy bottom for Mary Berry at Henley Triumph

Is there no end to Mary Berry’s talents? The 85-year-old cookery writer has made her successful debut as a cox for Henley Rowing Club.

‘But then I met the wonderful girls who briefed me very well, so I knew what I was doing guiding the boat. I just had to shout the instructions and encourage them to do their utmost.

‘And then, of course, it was a competition, which suits me down to the ground. I’m quite competitive, I was determined that we would be the winning boat — which we were.’

When she received an MBE from the Queen, broadcaster Annie Nightingale was worried about how the monarch could know what to say to everybody being honoured.

‘Breaking with Palace protocol, I spoke first. Just to try to be friendly and helpful, really. “Radio 1 DJ,” I offered. “I hear your grandson [Prince William] has been DJing recently, too.” And how did the Queen reply to my carefully selected nugget of topicality? “Probably.” That’s all she said. Just the one word.’

Cheers! Model-turned-publican Jodie Kidd says she is due to re-open her Sussex pub, The Half Moon, in Kirdford, after she was forced to shut its doors after one of her staff fell sick with Covid.

‘To save a beautiful 16th-century pub has been the hardest but most worthwhile thing I have ever done,’ she says.

‘My lovely Half Moon is still closed but due to open in the next month or so, but that hasn’t stopped me going out supporting my other locals.’

Georgia May puts down roots in LA… 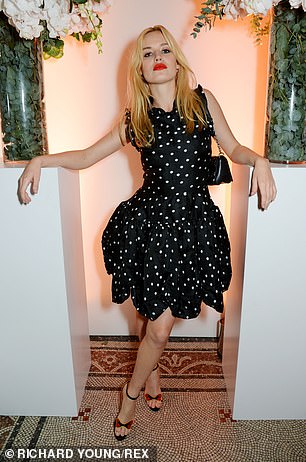 Sir Mick Jagger’s ex-wife, Jerry Hall, once admitted her mother told her the secret to keeping a man happy was to be a cook in the kitchen, a maid in the living room and a whore in the bedroom.

Now their daughter, model Georgia May, appears to be heeding at least the first part of that advice, as she’s been busy honing her domestic skills during the pandemic.

‘I was in LA when the lockdown happened. I started a fruit and veg patch,’ says the 28-year-old, who lives with her lover, Parisian restaurateur Louis Levy, 30.

‘I love to cook and my boyfriend gave me an incredibly detailed French cooking book, so I’ve been trying out new recipes.’

Comedian Russell Howard is laughing all the way to the bank. I hear the Mock The Week panellist made a £500,000 profit at the business through which he channels his earnings, Skylarking UK.

The profit in the 12 months to March this year takes the net worth of his business to £4.6 million. Newly filed accounts report £123,000 in dividend pay for Howard, 40.

Sir Ronald’s dust up with Dustin

Oscar winner Sir Ronald Harwood, who died at his home in Sussex on Tuesday aged 85, was seldom, if ever, starstruck.

The screenwriter and playwright admitted he didn’t think highly of Sir Anthony Hopkins and Sir Ian McKellen in the BBC adaptation of his play The Dresser.

‘For some reason, it just didn’t work,’ he said, and wondered if the two theatrical knights should have switched roles, with Hopkins playing the lead and McKellen the actor-manager.

Harwood didn’t think much, either, of Dustin Hoffman when he was making the cinema version of his play Quartet.

Hoffman wasn’t receptive to his constructive ideas and banned him from the set. Harwood, typically, was more amused than outraged by his imperiousness.