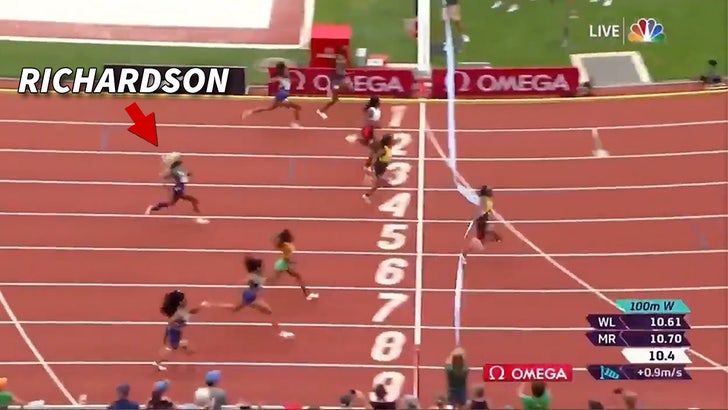 Sha’Carri Richardson‘s return to the race track wasn’t quite as glorious as she’d hoped — she came in last place against some of the same women she’d beat a couple months ago.

The U.S. sprinter — who was disqualified from competing in this summer’s Tokyo Olympics — took her mark Saturday for the Prefontaine Classic at the University of Oregon … where she was set to race in the women’s 100-meter dash against 8 others, including three of the Jamaican Olympians who took gold, silver and bronze during the games in her absence.

When the gun went off, everyone was hurdling down the track … but it quickly became clear that Sha’Carri was falling behind … and not just the Jamaican runners, but everyone else too.

She ended up coming in 9th place with a time of 11.14 seconds … which many people weren’t expecting. BTW, the Jamaican athletes ran the table again here for 1st, 2nd and 3rd — with Elaine Thompson-Herah finishing on top with a new record at 10.54 seconds.

No matter, though — because Sha’Carri got ahead of the criticism.

In a post-race interview with NBC … she made it quite clear, in spirited terms, that she wasn’t “done” … and that she couldn’t care less what haters have to say. She also said this is one race, and that it doesn’t mean much in the grand scheme of things for her future competing.

Of course, cruel as ever … the Internet was still quick to make jokes about her placement, which is very interesting. Sha’Carri almost became a hero when she was banned for smoking pot — but now … it seems people are all too happy to see her so-called “downfall.” 🤔

Something tells us she’ll prove them wrong soon enough.