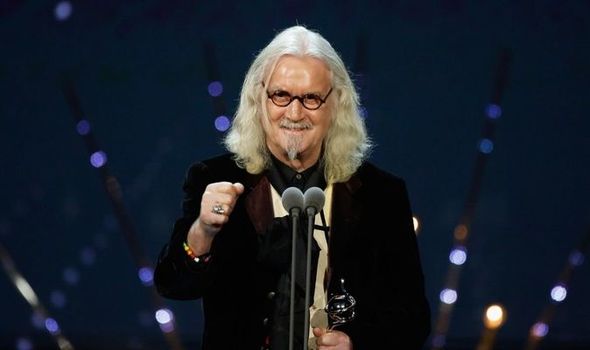 The 79-year-old, who suffered abuse at the hands of family members as a child, reveals he has always doubted himself.

This is in spite of an impressive, long-standing career in which he won a special recognition gong at the National Television Awards in 2016.

The following year he went to Buckingham Palace to receive a knighthood and was given an honorary degree from the University of Strathclyde.

Sir Billy believes that “making it is a myth” and nobody is ever “quite there”. He said: “I’ve never really had an ‘I’ve made it’ moment. I’ve had lots of moments, like walking on stage at the Albert Hall is a moment.

”I grew up in such doubt of myself with my family situation. It never really goes away. You can wear fancy clothes and be as interesting as you like but you’re left with the basic facts as your life pertains to yourself.

“It’s also good because it keeps you grounded. You’re not one of these loonies who demands things because they’re famous.”

That being said, one demand Billy would like to make is to go back and play one of his comedy gigs again. In 2013, he spoke “wildly” to photographer Valerie O’Sullivan at a show in Killarney, Ireland.

During an online Waterstones Q&A for his book Windswept & Interesting: My Autobiography, he said: “I’d love to meet her and apologise to her for it. I’d love to do the show again and do it right.”

Billy was a good friend of the late Sir Sean Connery, who died last year aged 90. Speaking of his pal, he said: “He was a famous person who knew what fame was, and fame knew what he was.”

He wants his gravestone to be on an island in Loch Lomand saying: “Here lies Billy Connolly, he was a good laugh.” It should be “turned on its side” as “a table where fishermen can leave a cup of tea down”.