Tennessee Governor Bill Haslam said on Monday that he is carefully considering the clemency request for Cyntoia Brown, who was convicted of first-degree murder and sentenced to life in prison in 2004 for killing a 43-year-old man who had solicited her for sex when she was just 16 years old. The Tennessee Supreme Court ruled last week that Brown must serve 51 years before she’s eligible for parole.

Prosecutors said that Brown went with Johnny Mitchell Allen with the intent to rob him, but she and her lawyers insisted that she shot Allen in self-defense because she thought he was going to kill her. She also said she went home with him to have sex for money on the orders of her abusive boyfriend, who beat her and forced her into prostitution. In her appeal, she said that she only took money from the victim’s wallet after he was dead because she was afraid of what would happen if she went back to her boyfriend empty handed.

Governor Haslam was speaking at an event on the importance of higher education in Tennessee on Monday when Justin Laing, a higher-education professional and member of Black Lives Matter Nashville, stepped up to the mic during the audience question portion.

“Since we’re here talking about education, I wanted to ask a question about one of your Tennessee students and a graduate of Lipscomb University, Cyntoia Brown,” Laing said, to audience applause. Brown earned her associates degree from Lipscomb while incarcerated.

“The Supreme Court’s decision that Cyntoia must serve 51 years before she can be considered for parole is a human rights issue,” Laing said. “And so I ask you, what really, functionally, is the difference between life without parole — which is no longer constitutional as the United States Supreme Court declared for minors, for any crime — and ‘you might get parole after 51 years,’ for a victim of sex trafficking?”

One of the moderators attempted to interrupt him and move on to another audience question, but Laing continued: “And so I ask why has Cyntoia Brown been incarcerated for 14 years for enduring harm? And so I say Governor Haslam, you have the power and ability to grant clemency to Cyntoia Brown, and so I ask when will you grant her clemency, I ask what will be your legacy as you leave office, and how will you answer to this human rights violation that the state of Tennessee is committing by keeping her incarcerated?” 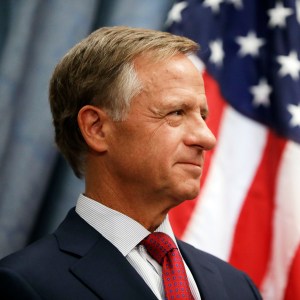 The governor thanked Laing for his question, and responded that his office is in the midst of reviewing Brown’s case.

“We’re reviewing a lot of cases,” he said, “and while Cyntoia’s case has gotten a lot of publicity, I don’t think you want us to treat hers any different than a whole lot of cases that I think people want us to review.”

Governor Haslam reiterated that his office is talking to everyone involved in Brown’s case, and they will have a decision on clemency before he leaves office in six weeks. In response, a woman in the audience shouted, “That’s not good enough!” and chants of “What do we want? Clemency! When do we want it? Now!” and “No justice, no peace” erupted, preventing the event from continuing.

Celebrities including Kim Kardashian West and Rihanna have spoken out about Brown’s case, and since the Supreme Court ruling last week there’s been renewed interest online, with advocates encouraging people in Facebook groups and on Twitter to call Governor Haslam’s office and demand clemency for Brown before he leaves office in January. A petition on MoveOn.org urging the governor to grant clemency has over 500,000 signatures.