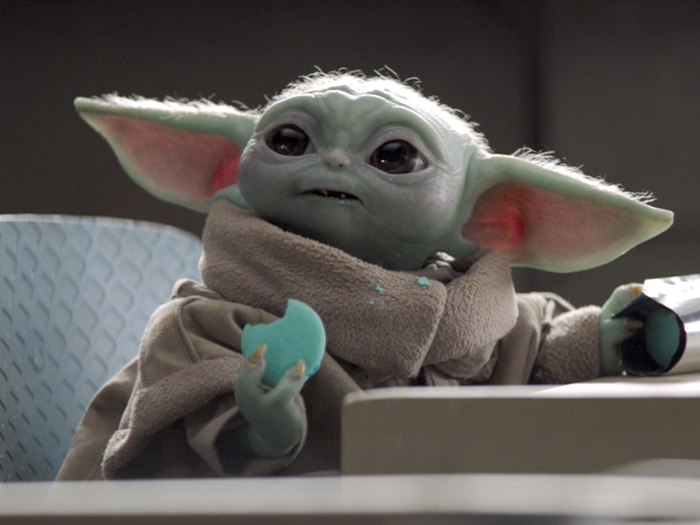 The second season of "The Mandalorian" continued on Friday with more mini-quests for the bounty hunter, and a bounty of adorable moments from the Child for fans. The little "Baby Yoda" (who, surely, you know by now is not literally Yoda)

As part of our weekly tradition, we're here to bring you the best tweets and memes from the newest episode. This week, with Frog Lady out of the picture, fans obsessed over the Child's first day in school, his love of cookies, and the accidental appearance of a background crew member in one part of the episode.

While the Mandalorian went on another mini-quest, the Child hung out in a classroom for the day

Not only was the Child looking quite cute sitting at a school desk, but he also used the Force to nab a classmate's sleeve of cookies. Fans loved this moment, especially since it was nice to see the Child eat something that wasn't the Frog Lady's precious unborn children.

Later in the episode, fans spotted the accidental inclusion of a crew member in the background of a scene

Eventually dubbed "Blue Jeans Guy," people noticed that one of the show's crew members was still in the background of the episode's final cut. One fan even made a fake character poster for him, while another drew a mockup of what an action figure toy of "Blue Jeans Guy" would look like in stores.

Week to week, people are enjoying the action and added "Star Wars" lore and overall fun that "The Mandalorian" brings. But above all, the show's core narrative is all about the growing bond between the Mandalorian, Din Djarin, and the small Child. The cuteness overload is giving people a much-needed dose of seratonin every weekend.

"The Mandalorian" season two continues this Friday with "Chapter 13," which premieres at 3 a.m. ET on Disney Plus.