Reality star Kim Kardashian finally opened up about her 72 day marriage to former basketball star Kris Humphries. Kim and her famous sisters, along with mom Kris Jenner, sat down with Andy Cohen for part 1 of the “Keeping Up With the Kardashians” reunion.

Kim didn’t hold back when discussing her marriages, even sharing how her split from Humphries led to her relationship with her soon-to-be-ex-husband, rapper Kanye West. The mom of 4 said (via People), “I would say six months after my divorce with Kris Humphries, I called Kanye and I was like, ‘You’re not even going to call me to say I told you so?”’ adding, “then we met up six months later.” Kim even confessed her union with West, “to me was like my first real marriage.”

While the KKW beauty mogul suggested that West knew her relationship with Humphries wouldn’t work, he apparently wasn’t the only one. Kris dished that she tried to talk her daughter out of marrying Humphries at the rehearsal dinner. Kim recalled, “What you said to me is: ‘I’m going to put you in a car, no one will find you, just leave and I’ll handle it.'” Yet Kim decided to go through with it, explaining, “I thought, ‘Okay, we’re filming this for a TV show. If I leave, I’m going to be known as the runaway bride forever and it’s going to be a huge joke, and I think I just have cold feet.'” Still, looking back at it, Kim does regret how it all went down.

Kim broke up with Kris Humphries in the worst way 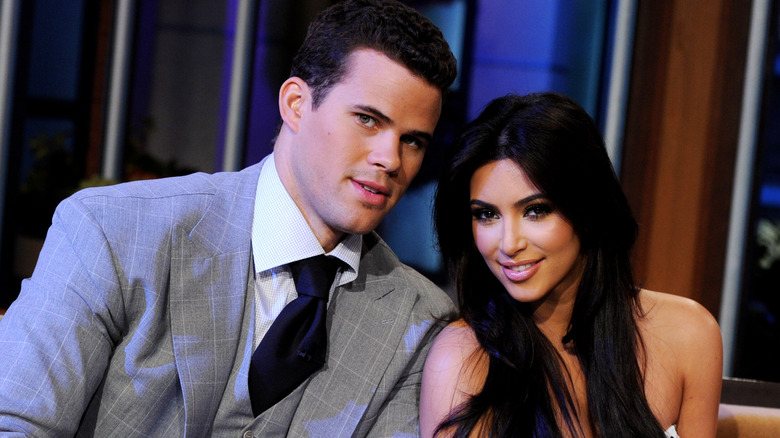 Kim Kardashian didn’t hold back when it came to discussing her split with ex-husband Kris Humphries on the “Keeping Up With the Kardashians” reunion. When Andy Cohen asked if she partially went through with the wedding just for the show, Kim answered (via People), “Yes. Because I felt pressured, I felt like I was going to let everyone down.” She even revealed what her breaking point was, saying, “He had a size like, 17 shoes lined up around my whole room and I just freaked the f*** out. I literally got claustrophobic. We were living in a hotel.”

The reality star did confess that she didn’t handle their split the right way, explaining, “I was so nervous to break up with someone, I handled it totally the wrong way. I fully broke up with him in the worst way, and I couldn’t, I just didn’t know how to deal.” When asked if she owes Humphries an apology, Kim admitted, “Absolutely, and I tried to, I tried calling him for months.”

The Skims founder also addressed the rumors that their $10 million wedding was just for publicity. “I took my entire fee and probably Kris’ because I wanted a bigger wedding than what they were going to pay for,” she clarified. “So, if that was fake, I would have saved my money.” In the end, Kim apparently wishes she had their 72-day marriage annulled instead of getting divorced, saying, “I wish I was only married once.”