Tiny and T.I. Harris gave an update on their first grandchild, a week after Zonnique Pullins welcomed her baby girl.

Just call them “Honey” and “Big Dog.” Tameka “Tiny” Harris, 45, and her husband T.I. “Tip” Harris, 40, appeared on FOX Soul’s The Mix on December 22nd to give an update on their new grandchild, and revealed the unusual nicknames they want instead of grandma and grandpa. The beaming first time grandparents made an appearance on the show while their daughter Zonnique Pullins, 24, who normally co-hosts the show, was resting up after giving birth on December 15. 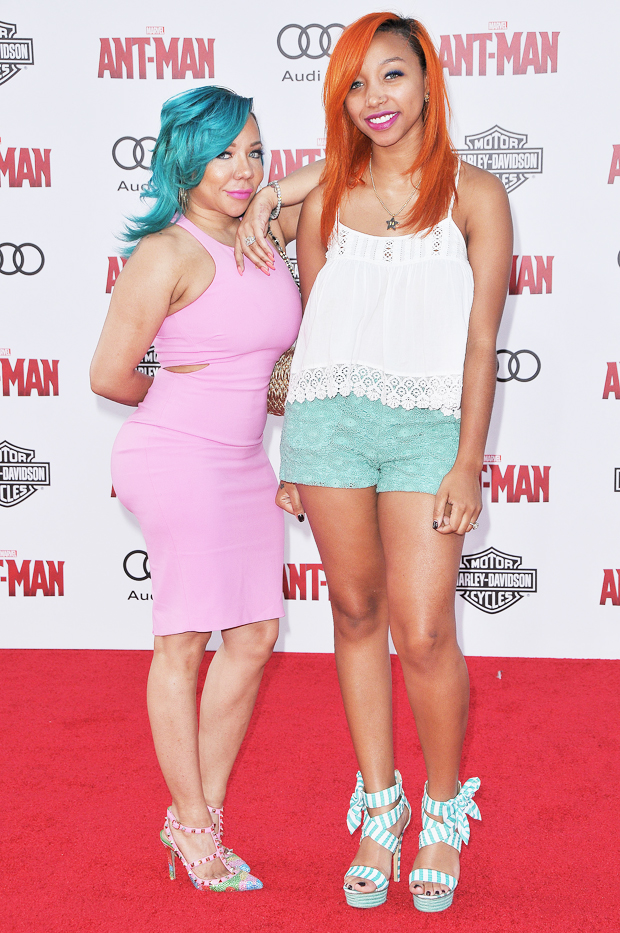 “Zonnique’s doing great,” Tiny shared. ” She’s getting her rest in, as much as she can. The baby’s sleeping all the time so she’s been able to rest a lot. I want the baby to be up more but I understand that the baby needs to sleep so she can get her rest. So I’m not gonna, you know, be a bad grandma  just yet…I would like the baby be up more, because she’s always sleeping…But I’m gonna give her a couple more weeks and then I’m going to start waking her up.”

When Tiny was asked what she wants to be called she explained that she’s narrowed it down to two choices — and neither one are anywhere close to grandma. “I think I’m going to be called ZaZa. It’s cute. And if it’s not ZaZa, I’m gonna go with Honey. So it’s gonna be one of the two.”

T.I. appeared later in the interview and explained that his nickname is Big Dog — but he’s not sure what his grandchild will call him. “I mean me, I’m Big Dog, but at the of the day guess what, that’s for me and her to figure out. She’s gonna tell me what I’m gonna be called. I think it’s kind of arrogant of us to say what the baby’s going to call us, you know what I’m saying, you should let the baby call you what the baby sees.”

Tiny didn’t quite agree with her husbands laissez faire attitude and explained, “You have to put it in the baby’s head what to call you, they don’t know.”

In true T.I. fashion he had a quick — and funny comeback. “She’s talking about indoctrinating the mind of a child basically,” he joked. “That is MK Ultra mind control. Let the child form her own conclusions and do what she feels is right.”

The “Libra” rapper teased the show’s co-hosts by adding, “Now you got us smack dab in the middle of an argument. Is that the plan of this show?”

But T.I. wasn’t all jokes. He turned serious when he was asked how he felt when he first held his grandchild. “It was beautiful for me,” he said with reverence. “I love babies.”

Tiny added, “He was calling everyone showing off his grandbaby. He grabbed her before I could even get her.”

T.I. teased her back saying, “You was in the bathroom, you was unavailable. I was open, so they hit me.”

Tiny revealed during the interview that she’s already spoiling the new baby. “I bought her a lot of stuff. Everything she had on her register that people didn’t buy, I bought it and I kept it myself, so she didn’t receive none of those gifts. I have all that stuff, I just got to put it together.  I haven’t really got a chance to keep her, so I’m gonna try to put her something together by my bed so when she comes, she’s ready.”

Tiny has been sharing her happiness over the new addition to the family on her Instagram page. On December 15 she congratulated her eldest child over the birth of her darling baby. “Congratulations to my first [love] my LuvBug [Zonnique],” Tiny wrote. “My Gbaby is so fat & cute!! Just as I dreamed she would be!! I told y’all today was a very blessed day straight from God!”

Tiny was right by her daughter’s side throughout her pregnancy giving her plenty of support. Zonnique told HollywoodLife during an EXCLUSIVE interview that Tiny even helped her pick out names. “My mom has definitely been coming up with some names,” she shared during an August 2020 episode of HollywoodLife TV Talk. “My mom loves everything about this process, but she loves giving names out. She prides herself on our names, all of her children. She’s like, ‘I’m definitely the best with names,’ so I’m definitely looking towards my mom with that.”

Zonnique also opened up about the moment she told her mom that she and her boyfriend Bandhunta Izzy (real name Israel James) were expecting their first child. “I wasn’t really so nervous to tell my mom because I talk to my mom about everything and I was really comfortable talking to my mom,” she said.