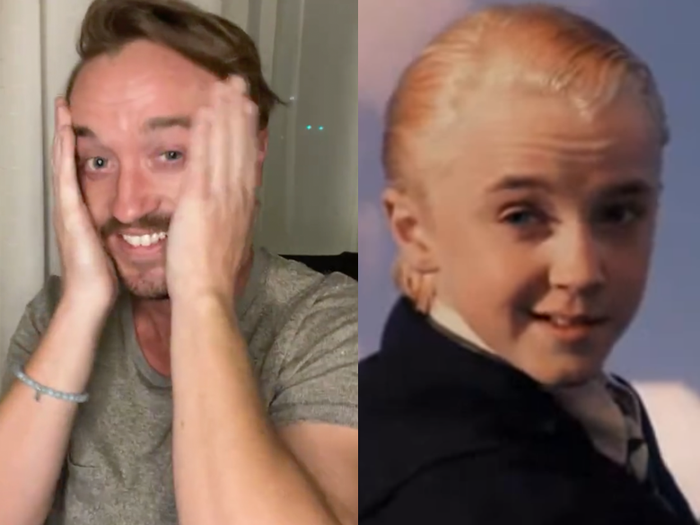 English actor Tom Felton, known for playing Draco Malfoy in the "Harry Potter" film series, has started rewatching the movies for the first time in about 20 years.

On Monday, he watched the first 11 minutes and 11 seconds of "Harry Potter and the Sorcerer's Stone" (2001) while livestreaming on Instagram so fans could see his reactions. He set out to watch another 11 minutes of it on Wednesday, but he lost track of time and ended up watching the next 22 minutes, instead.

Even though he's only about 30 minutes into "Sorcerer's Stone," Felton has already let fans in on behind-the-scenes secrets about the film while providing colorful commentary.

Felton seemed to get a little choked up when the iconic John Williams score kicked in during the opening scene, and his visible waves of emotion didn't stop there.

Upon seeing his 11-year-old costar's debut as Harry Potter, Felton said, "Look at him! [Daniel] Radcliffe looks about 5," and had to tell himself to "keep it together" as he started tearing up.

In between sharing tidbits about the set and impersonating Hagrid's accent, he said the movie is "not bad" for anyone who hasn't seen it before.

"I don't think I've ever seen this — I've never seen this footage, since the premiere. I have no idea what's going on, it's fantastic," he said during the stream. "I'm watching it for the first time really."

He also added, "I think it works, right? We're all watching the same thing, and I'm just sort of tearing up really rather than giving you commentary, but it'll get better."

When he first saw Professor McGonagall on screen, Felton sighed and said, "She's my hero." It's unclear if he meant the character or the actor who plays her, Dame Maggie Smith.

During his second video on Wednesday, the actor also shared that he got to keep one of the envelopes from the scene where the owls bombard the Dursley house while trying to deliver Harry his Hogwarts letter.

Felton has yet to see his own character, Draco Malfoy, on screen, but he should be encountering him soon. The character's first scene is on the Hogwarts Express, and the actor left off at the scene on Platform 9 3/4.

In 2018, Felton told People that he hasn't rewatched any of the "Harry Potter" films since they premiered and that he was saving them "for a sacred day."

"I have visions of doing that with my two kids, when I'm a little bit older," he told the publication.