‘DWTS’ competitor Brian Austin Green got some love from his ex Vanessa Marcil when she and their son Kassius supported him on the dance floor.

Vanessa Marcil, 52, proved there’s no bad blood with Brian Austin Green, 47, as she supported her ex at the season premiere of Dancing with the Stars. The 90210 star is appearing on season 30 of the long-running competition show, partnered with his girlfriend Sharna Burgess. Vanessa took to Instagram to share a snap of her 19-year-old son Kassius in the car on his way to the studio to watch his dad hit the dance floor. “Headed to see dad. #TeamGreen,” she captioned the pic.

Kassius was seen rocking a black button-down and black blazer, as he donned blonde tips in his hair. Vanessa added, “They have offered but that’s a hard no for me,” in relation to appearing on DWTS herself. “That’s so much hard work, guts and bravery. I’m in full cheerleader mode for now.” One follower commented, “I wish I could coparent as gracefully and peacefully as you!” to which she replied “lord help us all,” with praying hands emoji.

When Sharna, 36, asked her boyfriend how he felt about his first dance, Brian, 48, said the experience was “nerve-wracking, but it awesome.” He added, “the high [you feel] when you get it, and it’s done, is amazing.” The pair then leaned in for a passionate kiss, as they encouraged their fans to vote. After the live show, Sharna shared a message to her Instagram, along with a DWTS promo photo of her posing alongside Brian. 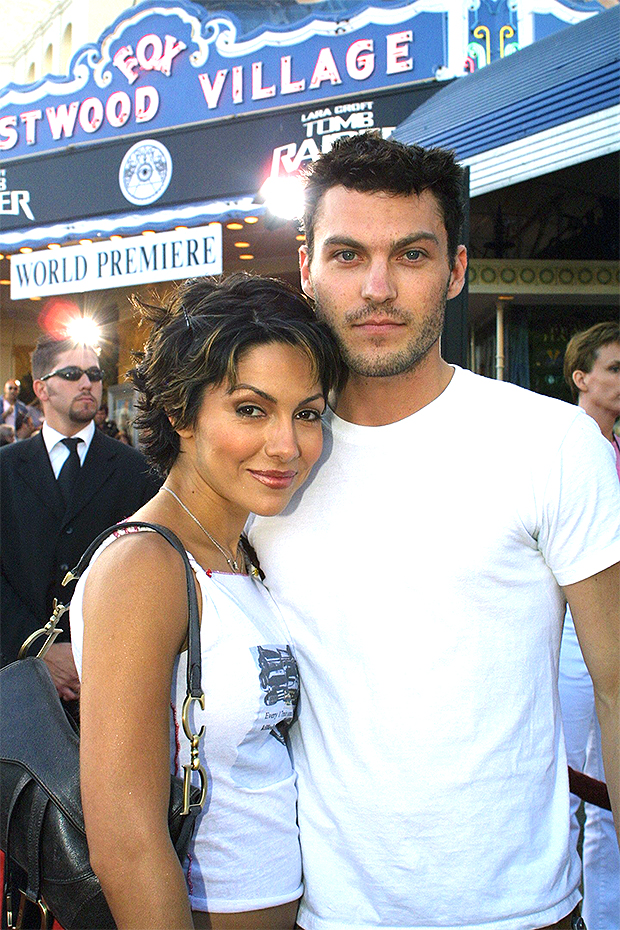 “Honestly… I’ll find the right words at some point. But holy sh-t, I am in heaven getting to do what I love with the man that I love. Please vote, cos I wanna do this for as long as we possibly can,” she captioned the shot while adding “TEXT BRIAN TO 21523.” The Beverly Hills, 90210 star was previously married to Megan Fox, 34, with whom he shares sons Noah, 8, Bodhi, 7, and Journey, 4. Prior to that, he dated Vanessa from 1999 until 2003, and they share one child.