Los Angeles Rams defensive lineman Aaron Donald was drafted by the team with the 13th pick in the first round of the 2014 NFL Draft. Since then, he’s been such a force on the gridiron and has been selected to the Pro Bowl every year he’s been in the league. Donald has also won the NFL Defensive Rookie of the Year and was named the AP NFL Defensive Player of the Year three times including back-to-back in 2017 and 2018.

Donald has earned the nickname “Terminator” on the football field but off the field, he’s a family man. Here’s more about his fiancée Erica Sherman and why some fans think they may have secretly tied the knot recently, plus how many children they have.

Sherman was born in 1991 in California and has one sister named Alana.

After high school she attended Louisiana State University where she earned her bachelor’s degree in Mass Communication, majoring in public relations with a minor in business administration. Following graduation, Sherman interned at Fox Sports. In 2013, she joined the Tampa Bay Buccaneers organization as an assistant for the Glazer Family Foundation. In 2015, she began working for the Rams as their Community Affairs and Player Involvement manager as well as with the team’s Women’s Organization.

Donald met Sherman when she worked for the Rams

Sherman met her future husband while working with the Rams. Exactly when they started seeing each other isn’t clear but Donald and his high school sweetheart, Jaelynn Blakely, ended their relationship in 2019.

Today, Donald’s fiancée is the Vice President of Athlete Partnerships for game1, a sports-focused Hollywood production company. She also serves as Donald’s marketing manager and is on the board for AD99 Solutions, which is the athlete’s Pittsburgh-based outreach program.

Are they already married? 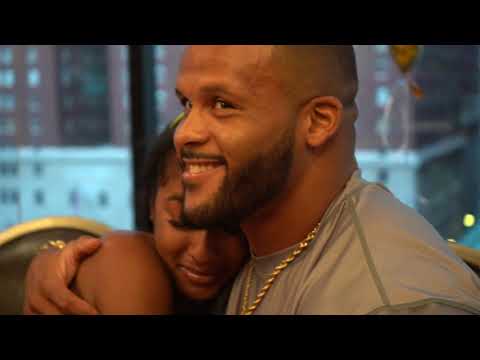 Donald and Sherman got engaged in 2020 but some media outlets reported that they secretly tied the knot recently because Sherman changed her last name on her social media accounts. However, the couple has not confirmed any of those reports.

In September 2021, the NFL star and Sherman welcomed their first child together. They chose to name the little one Aaric, which is a combination of their first names. Donald also has two other children with Blakely. Their daughter, Jaeda, was born in 2013 followed by a son, Aaron Jr. in 2016.

Donald has said that his kids are his motivation and has shared videos of his life with them and Sherman on his YouTube channel. 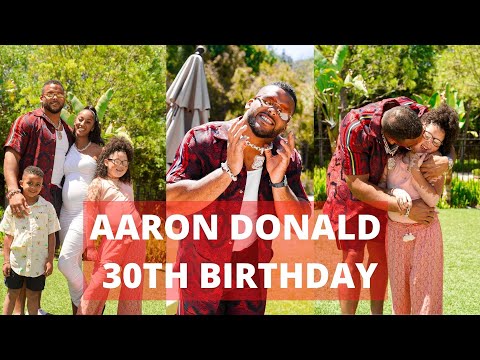 As for what he’s still wanting for himself on the football field, that’s a Super Bowl ring. Ahead of the big game, Donald spoke to reporters about how much he wants to win.