It’s not often your childhood heroes come to life on Twitter and defend truth and justice in front of your eyes. But that’s exactly what happened this week for fans of Xena: Warrior Princess.

For those who don’t know, Kevin Sorbo, star of Xena‘s sister show Hercules: The Legendary Journeys, is one of a handful of celebs who love them some Donald Trump. Between Dean Cain, Antonio Sabato Jr., and Scott Baio, the star power at those rallies has just been off the charts!

Anyway, it’s sad days for the Trump posse, who hitched their wagons to a high plains grifter and listened when he said he was the only one they could trust. Now they’re now in the position of either admitting he lost the election… or thinking they’re all fighting some kind of conspiracy involving every election board in the country, tons of Republican elected officials, and of course, well over half of American citizens. (You know, enough people to just vote and elect the other guy.)

More awkward this week was seeing some of Trump’s most ardent defenders trying to excuse the fact he incited an insurrection as he told his followers to march to the Capitol Building while Congress was certifying the election on Wednesday — and they did, breaking in and taking over the building, delaying the inevitable if only by a few hours.

Five people died in the Capitol riots, including a police officer. An explosive device was reportedly found. The American flag was ripped down and replaced with one that said Trump.

How do you defend your guy with those facts on the table? Easy. You flip the table. As they have before with school shootings, right wingers have been flogging a new conspiracy theory to tell themselves this never happened.

Seriously. This is what they’re saying. Just look what Hercules tweeted on Wednesday:

And this isn’t just one guy saying something inane. Tons of his followers agree with him. This is their line now. Heck, House Minority Leader Kevin McCarthy went on Fox News and said it.

They really can’t defend the actions of their President and his followers, so they just invent their own reality.

The problem is, well, facts. Those guys invading the Capitol were Trump supporters. Many of them are quite vocal ones with their own followings on Twitter and other social media sites. Several have been identified already.

Hilariously, some of them have been responding to pundits trying propagate the conspiracy theory — denying they are Antifa and trying to make sure they get their credit for committing federal crimes.

But you know Hercules — gotta keep fighting, no matter how lost the cause. So of course he kept pushing the ludicrous theory by tweeting the next day:

Well, that’s certainly true. They don’t look like Patriots… Oof, who could take the best advantage of a self-own like that?

Lucy Lawless, the Aussie actress who fought against and teamed up with Hercules while starring in her own hit syndicated ’90s adventure show — the one with slightly more lesbian undertone — jumped in to respond to her former colleague:

“No, Peanut. They are not Patriots. They are your flying monkeys,homegrown terrorists, QAnon actors. They are the douchebags that go out and do the evil bidding of people like you who like to wind them up like toys and let them do their worst. #keepingYourFilthyHandsclean #enabler”

In response to all those calling Lucy ruthless for her savage smackdown of her ex co-star, she responded:

Amazing. We love that one mythical hero is on the right side of history, but so sad that the other is just living in the ancient past…

Innerestingly the feud between these two has been going on for 20 years now! In an interview with SFX magazine way back in 2001, Kevin apparently threw down the gauntlet by dissing Xena for not having “family values”:

Oh man, he was a hypocritical right wing toolbag even then!

Well, at least ’90s kids still have one star they know will have their backs. 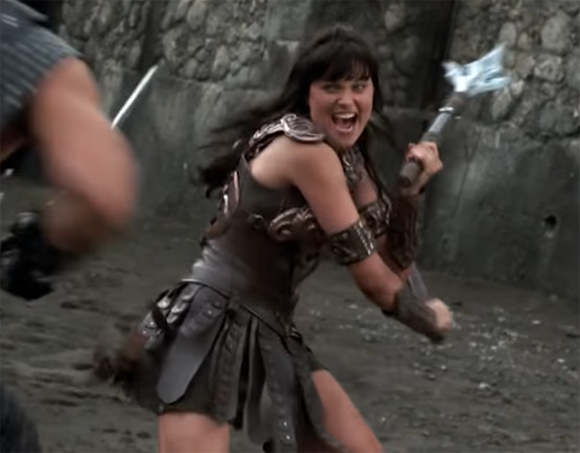