When Julian Olidort returned to his Manhattan office after a business trip to Israel five years ago, he said his first priority was “to assemble a team of co-workers” to assist in the delicate handling of a once-in-a-lifetime opportunity that emerged 6,000 miles away in Jerusalem and Tel Aviv. It was an investment he was eager to pursue.

Her name was Sivan Aloni.

“She was a very beautiful and intelligent woman with a very different outlook on life,” Mr. Olidort said. “She lived every day at her own pace, and that was something I deeply admired, so I thought if there was ever a chance to meet her again it would be so magical, so worth it.”

Mr. Olidort, now 29 and an associate at the Federal Reserve Bank of New York, and Ms. Aloni, now 31 and the adviser to Ambassador Dani Dayan, consul general of Israel in New York, met in Jerusalem in May 2014 at the first Genesis Prize award ceremony. The annual event recognizes achievement steeped in Jewish values. (Michael R. Bloomberg was the first recipient.)

Mr. Olidort, just 24 at the time, attended the event in his official role as executive secretary of the Genesis Prize Foundation. He was placed in charge of an international selection committee that included former Supreme Court justices, members of Israel’s parliament, the chief rabbi of the United Hebrew Congregation of the Commonwealth, and Elie Wiesel, the winner of the Nobel Peace Prize in 1986. 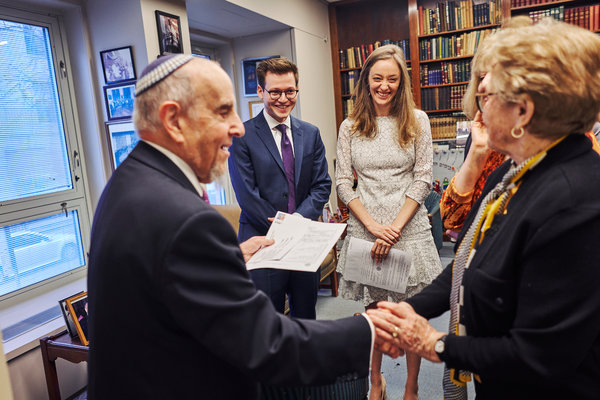 “Looking back, that was a lot for a young guy to handle,” Mr. Olidort said with a chuckle, “but then again, so was Sivan.”

Ms. Aloni, then a 26-year-old student at Hebrew University of Jerusalem working for the Israeli production company that produced the event, was stationed in the guest relations area in charge of coordinating the flow of journalists, panel judges and other attendees during the course of the evening.

“I saw her standing there and just kind of froze for a moment,” Mr. Olidort recalled. “I immediately told myself, ‘If this girl could be the one, than I’m satisfied, I’m set for life.’”

Unsure how he might relay that sentiment to a woman he had never met in a room teeming with security guards and media personnel, Mr. Olidort continued to stare squarely at Ms. Aloni as he began walking in circles. “I wanted to look busy,” he said, “so I walked out of the room three times, and each time I had to re-enter through security.”

Ms. Aloni, who was in the company of several colleagues, could not help but notice the peripatetic stranger who appeared to not know whether he was coming or going.

“I glanced over and saw this guy who looked dashing in his suit,” she said. “He also looked like he was half the age of everyone else in attendance.”

Mr. Olidort decided the best plan would be to make a beeline for Ms. Aloni, and upon arrival, he did not mince words. “Look, I don’t want to embarrass you in front of your friends,” he said to her, “but may I have your number, I’d love to take you out.”

Ms. Aloni, who said she found Mr. Olidort’s bold approach “rather charming,” agreed to have a drink with him later that night, which was a Thursday, but in the company of friends.

Mr. Olidort, scheduled to return to New York the next day, chose to join her friends. Despite the fact that he did not get the alone time with her that he desired, he said he awoke the next morning “feeling that she was someone I would flip the whole world over to be with.”

He rearranged his travel plans, canceling a trip to Turkey and extending his time in Israel by three more days — until a Tuesday — to get to know Ms. Aloni on a more personal level. He told her he was staying to take care of some unfinished business, but failed to tell her that she, in fact, was the unfinished business.

He asked her out to dinner on a Saturday evening, and though Ms. Aloni accepted the invitation, she arrived with several friends in tow, leaving Mr. Olidort a bit flustered.

He explained his frustration to her the next morning, on a Sunday, two days before he was to return to New York, and followed his one-on-one request with yet another dinner invite, this one to Manta Ray, a restaurant on the beach in Tel Aviv.

Ms. Aloni accepted, agreeing to go solo, she said, “because I could tell by then that Julian was a very sincere person, and a really nice guy.”

She could also tell how he was nervous. “At dinner, he kept playing with his food,” she said. “It took him a little while to relax.”

Mr. Olidort settled in and the two got to know each other. Ms. Aloni told him that she was born in Petah Tikva, a city in the central district of Israel, and raised in Tel Aviv, the only daughter of Zivit Furstenberg, her mother, who lived in Korazim, Israel, and Raviv Aloni, her father, an information technology specialist who remarried after divorcing Ms. Furstenberg and moved to Brisbane, Australia. Ms. Aloni spent many of her summers in the company of her stepsister and stepbrother in Australia.

She graduated from Thelma Yalin National High School of the Arts in Tel Aviv, before serving two years in the Israeli Army, where she was a sergeant in its Yiftah unit, which developed materials for special infantry operations. She went on to Hebrew University, earning a dual degree in Jewish thought and political science.

Ms. Aloni and Mr. Olidort soon realized that art played an integral role in both their lives. Her mother was an independent jewelry artist. His mother, Nadia Klionsky-Olidort, was a landscape artist and the senior studio artist for the Echo Design Group in New York, where she designs scarves. She inherited her artistic talent from her father, Marc Klionsky, a Soviet-born artist who developed a nuanced form of American Realism through the eyes of new immigrants in New York City in the 1970s and 1980s.

Mr. Klionsky, who died at age 90 in 2017, painted the portraits of many notable leaders and musicians, including Golda Meir, B.B. King and Dizzy Gillespie — the latter still hanging at the National Portrait Gallery in Washington.

Mr. Olidort, the younger of two sons born to Ms. Klionsky-Olidort and Joseph Z. Olidort of New York, graduated from Brandeis University and received a master’s degree in international finance and economic policy from Columbia. He was a Fulbright scholar in Sweden, where he conducted economic research on the Swedish glass industry while blowing glass at a factory in the southern Smaland region.

He later told Ms. Aloni that after meeting her in Jerusalem, he returned home so fearful of losing her “by saying the wrong thing,” that he turned to his co-workers “for some advice and coaching,” on what they felt were the proper things to say to maintain his newfound, long-distance relationship.

“For two months, people kept popping into my office with new ideas, new things to say to her via phone or text,” Mr. Olidort said.

“He was always up front about his feelings for me,” Ms. Aloni said. “So at that point, I had put a lot of trust and faith in him.”

Their rendezvous in Venice, Mr. Olidort said, “felt more like an incredible honeymoon than a second date.”

In February 2015, Ms. Aloni visited Mr. Olidort in New York, where she did some sightseeing, job-hunting and soul-searching. In October of that year she returned once more, this time considerably shortening the distance of their long-distance relationship by moving into Mr. Olidort’s Manhattan apartment. She had also accepted a job as a director in the public diplomacy department of the Israeli consulate.

“Throughout our relationship Julian kept talking about getting serious and wanting us to have a great life together, and that always felt right with me,” Ms. Aloni said. “So I moved in with him without hesitation and without worry.”

They were married on a Tuesday morning, April 2, by Rabbi Haskel Lookstein at Congregation Kehilath Jeshurun in Manhattan. The couple were joined by the groom’s parents and his grandmother, Irina Klionsky, who is also the widow of Marc Klionsky. Renée Schreiber and Eran Polishuk, colleagues and friends of the bride, also attended. The bride’s mother tuned in via Skype from her home in Israel.

“By the power vested in me as a rabbi and because of the fact that I registered with the city clerk 60 years ago in order to be able to do such a ceremony, I now pronounce you husband and wife, according to the law of the State of New York,” Rabbi Lookstein said playfully. “You are not yet married according to the law of Moses and Israel.”

When the brief ceremony ended, the small wedding party went to a nearby deli to celebrate over coffee and bagels.

“We fell in love with Sivan the moment we met her,” said the groom’s mother, Ms. Klionsky-Olidort, who was seated inside the deli next to her husband, Joseph Olidort, a civil engineer at Aecom, an engineering firm in New York. “She is his sunshine, the person who brings him the most joy.”

The newlyweds would eventually call a cab for Irina Klionsky, 82, and escort her back to her SoHo apartment, where she and Mr. Olidort manage her husband’s art estate. It was also the place where Mr. Olidort proposed to Ms. Aloni in March 2018. (Mr. Olidort said he hoped to put together an exhibit in the near future of Mr. Klionsky’s works, several pieces of which have never been on public display.)

“The Jewish community is an important part of our lives,” Mr. Olidort said. “We are both passionate about the continuity of the Jewish people and innovative Jewish education to inspire and engage young people to remain involved with their Jewish heritage.”

On April 16, the bride and groom will take part in a celebration ceremony in Jerusalem before 300 family members and friends. Rabbi Lookstein will officiate again at a traditional huppah and reception at Olmaya, an events space there.

“I only wish my husband was here to see all of this,” said Irina Klionsky, smiling before her cab arrived as she stared across the crowded deli at the bride and groom.

Standing side by side at the noisy deli counter after their wedding, the couple laughed as they pointed to a variety of bagels and other tempting choices on a menu hanging high on a wall above a colorful and somewhat chaotic New York scene. This was modern-day portrait of youthful exuberance the likes of which Marc Klionsky might have captured in his heyday.

Rabbi with a Reputation The officiant, Rabbi Haskel Lookstein, converted Ivanka Trump before she married Jared Kushner. He also made headlines over the years as a political activist and critic of the Soviet Union.

In the Cards During wedding planning, Mr. Olidort and Ms. Aloni wrote on index cards wedding priorities and flipped them like baseball cards. “Her top priority was to get married in Israel, and mine was for us to be married here, by Rabbi Lookstein,” Mr. Olidort said. “In the end, we both got what we wanted.”

A Brighter Day The groom’s father survived the Sept. 11, 2001 terror attacks by walking down 91 floors from his office in Tower Two at the World Trade Center. “Every day since has been a gift, he said, adding, “Today is the biggest gift of all.”