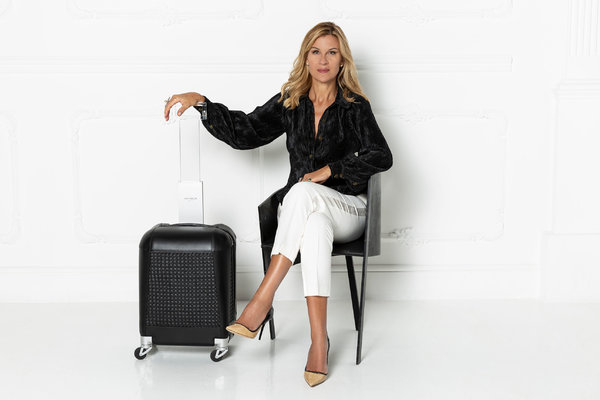 Imagine having one of the most famous last names in fashion. Then imagine not being able to use it when introducing your own business.

That has been the situation facing Patricia Gucci — granddaughter of Gucci’s founder, Guccio Gucci, and the daughter of Aldo Gucci, the mastermind behind the early global expansion of the Italian luxury house — and her new high-end luggage label, Aviteur. Not that she appears to care.

“I don’t feel sad about it at all,” said Ms. Gucci, 56, in a five-star hotel lobby in Milan last week, just days before the glitzy launch party for Aviteur during Paris Fashion Week (it was Wednesday at the Hôtel de Crillon). “I don’t want to feel like I am trading in on the Gucci name. I feel fortunate to have had wonderful influences in life, but using it officially would mean selling myself in a way that I don’t want to.”

Once described by The New York Times as the “most eligible girl in the world,” Ms. Gucci was the product of an extramarital affair between Aldo Gucci and his personal assistant, Bruna Palombo, that lasted more than 30 years. The apple of her father’s eye, she was given a seat on the Gucci board at age 19 and even became a high-profile brand ambassador for the brand.

Then the company became embroiled in a tax scandal and in 1993 was sold by the family. As a result of the sale, Ms. Gucci said, she was required to sign a decade-long nondisclosure agreement. Eighteen months later, when her cousin and the former head of the family fashion house, Maurizio Gucci, was shot and killed in Milan by a hit man hired by his ex-wife, Ms. Gucci had fully retreated from the industry, and was raising her three daughters.

Now, she is back, three years after the publication of her memoir called — well, “In the Name of Gucci.” A frequent traveler from her base in Geneva, Ms. Gucci started Aviteur 18 months ago after realizing that “short-haul travel had become so ugly and logo-driven and the glamour and romance was all gone.”

Despite having no formal design training, she decided to fill the gap. The shell shape of her carry-on bag is modeled after the back of a London double-decker bus, she said, while the woven leather paneling nods to a bygone era.

The short-lived discussion about Venice banning rolling suitcases inspired Ms. Gucci’s search for silent wheels — “they are the Tesla of carry-on wheels,” she declared, while the clear handle in Lucite is the handiwork of automotive designers. The case comes in three colors: black, tan and gray. It is made in Italy, and it is aimed at the 1 percent of the 1 percent: the bags, which go on sale this week and take around eight weeks to make, retail at 4,250 euros, or $4,650, on the Aviteur website or third party e-tailers like Moda Operandi.

It’s an acknowledgment, if any were needed, that contemporary travel has become the new caste system, but Ms. Gucci sees it as reality.

“What can I say, I got brought up around the best of the best and that’s what I know and want to pass on,” she said. “Some of my earliest memories recall the smell of Italian leather and the buzz of the Gucci workshops with my father. Though my mother isn’t quite sure why I am doing what I’m doing, I really feel my father’s presence here.”

Elizabeth Paton is a reporter for the Styles section, covering the fashion and luxury sectors in Europe. Before joining The Times in 2015, she was a reporter at the Financial Times both in London and New York. @LizziePaton