Dharmesh Desai moved to Silicon Valley in 2008 to take a job at a start-up. He met Claire Umeda on the job.

But as he was soon to learn, Ms. Umeda was married.

Both noticed how well they worked together as colleagues, and a friendship began between Mr. Desai, a Mumbai native who left his homeland to live abroad at 20, and a self-described “California girl.” As she got to know him, Ms. Umeda started to confide in Mr. Desai about the difficulties in her marriage.

“Dash was a really good listener, and didn’t judge me or push me in any way,” she said. “He was just a friend that would listen.”

In 2009, Ms. Umeda and her ex-husband went through a mediation process, and divorced.

Mr. Desai remained focused on their friendship, until finally, he felt the time was right to confess how he really felt about her. It didn’t come as a surprise. 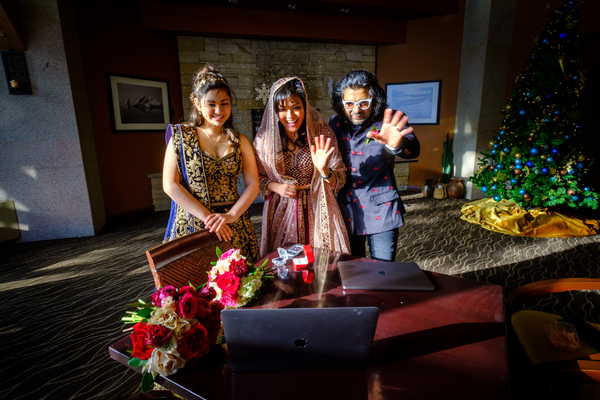 “We got along like peas and carrots,” she said. “It was such a natural thing, a no-brainer.”

Neither really remembered their first official date as a couple, but Ms. Umeda, 52, does remember when Eva, her then 6-year-old daughter, saw her mother hugging and looking differently at Mr. Desai for the first time. Her daughter’s face lighted up.

“Dash is the kindest person, a gentle, kind soul,” said Ms. Umeda. “He’s the kind of person who wakes up in the morning and looks in the mirror and thinks about how he can be the best person he can be, every day.”

In 2012, they traveled to New Zealand to attend the wedding of Mr. Desai’s nephew. During the trip, he spontaneously proposed near a waterfall while on a cruise of the Milford Sound.

When they returned, they moved in together in San Jose. But when it came to wedding planning, it wasn’t a high priority, and the years went by.

In 2018, he proposed again, at a dinner celebrating the 57th wedding anniversary of Ms. Umeda’s parents.

They chose Oct. 10, 2020 as their wedding day. But then the pandemic started. When Mr. Desai went online to reserve an appointment for that date with the city and county of San Francisco, he couldn’t. Later, he secured a date in December.

Given that they both work for start-ups and her daughter’s school went fully remote, they moved into their place at a ski resort in Squaw Valley, Calif., when the pandemic started. (Mr. Desai is the director of platform and technical evangelism at StreamSets, a data integration and management platform, and Ms. Umeda is the vice president of marketing at Okera, a data access platform.)

They began the morning of Dec. 14 by hitting the slopes. Given that the groom is a photographer himself, they hired a photographer who specializes both in weddings and adventure, so he took photos of them skiing some of their favorite runs. Then they got ready, with Ms. Umeda styling her own hair as well as her daughter’s and her soon-to-be groom’s.

In the afternoon, they were virtually married by Fallon Lim, a senior legal processing clerk at the city and county of San Francisco, in a room of the now-closed Six Peaks Grille at the Resort at Squaw Creek.

“Now we have something good and amazing to remember about 2020,” Mr. Desai said.