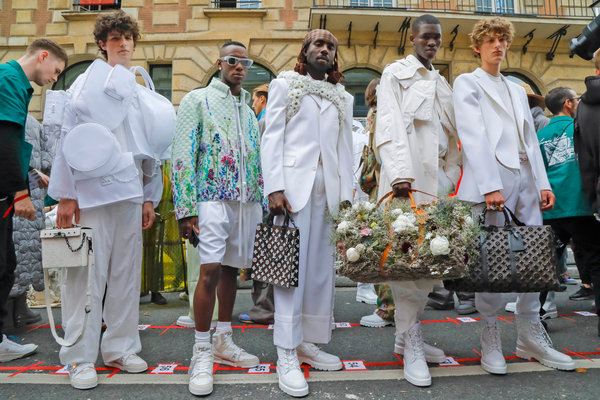 PARIS — By now a lot of people know Virgil Abloh’s story: a suburban kid whose parents came to the United States from Ghana, and who grew up in suburban Michigan, loving skate culture and hip-hop and a dreaming of a future in architecture or design.

The young Mr. Abloh was hardly a top student or anyone’s idea of a star. Yet perhaps what he had that others around him lacked was persistence, that staple element of the mythology of immigrant success.

“I always love the first ‘no,’’’ Mr. Abloh once told me, calling to mind an observation often applied to Karl Lagerfeld, another outsider who made his name and his fortune by translating the French to themselves and who was memorialized here this week. Faced with a wall, Mr. Lagerfeld immediately sought a means of jumping over it or walking around it.

Mr. Abloh does the same. One of the obstacles facing him as artistic director of men’s wear at Louis Vuitton, one of the most powerful labels in the world, was how to respect what the industry calls the “codes” of a storied house while simultaneously disrupting them.

His solution, he explained recently in Italy, where he had traveled to see the artist Sterling Ruby’s fashion debut in Florence, was to study the French.

“I’m in my third season now and I’m approaching being an artistic director as a learning process,’’ he added, a collaboration both with his design team and with a corporate culture that, despite the global reach of LVMH Moët Hennessy Louis Vuitton, remains Gallic to its core. “I’m learning rather than asserting,” he said.

As a designer, Mr. Abloh is an interpreter, something he demonstrated during the Yeezy years, when his job was largely about translating the mad-genius workings of Kanye West’s mind into clothes. Though Mr. Abloh keeps a place in Paris, his home continues to be in Chicago, where his wife lives and his two children go to school. “I commute,’’ said a man who once claimed to be on a plane more than 300 days of the year. “Any time I have eight hours I can get home.’’

Still, Paris has a way of seeping into the consciousness of any visitor. While the corrosive realities of a complex city — wage stagnation, high unemployment, immigrant encampments ringing the center, a burgeoning crack epidemic — are far more intrusive than in past, it’s the cliché Paris that keeps the city at the top of top tourist destinations in the world.

And it is that Paris that Mr. Abloh aimed to evoke by holding his spring 2020 show in a leafy square on the Right Bank, shut down (and heavily secured) for the occasion, its cobbled streets turned into a runway, its cafe tables made over into seating for guests. Entertainers were brought in to create balloon sculptures of the Eiffel Tower and Vuitton employees circulated with trays of little Vuitton-branded souvenirs of the famous monument. There were stands offering ice cream and crepes, and waiters delivered Champagne. Every so often a balloon exploded with a sound that made everyone jumpy.

Invitations to the show had come in formal, oblong boxes containing all the makings of a Vuitton-branded kite. Boyhood in its innocence was a realm on which Mr. Abloh had set his sights and — while the designer’s motives may be blameless — one got the sense that if Vuitton does not yet own that particular demographic, it is certainly on the list.

The collection itself had slightly kiddie air, what with its blowzy and oversize proportions; its Necco Wafers palette; its childlike florals; and the costume trunk playfulness of barely post-adolescent boys wearing jackets over tunics or skirts. There was also something incompletely evolved, though, in the overtness of Mr. Abloh’s quotations from fellow designers, as though he had written a Wikipedia term paper. Spotting the references became a game.

Aren’t those multiple fastenings festooning jackets kind of a Craig Green trademark? And that flowered chest holster: Isn’t that straight out of Helmut Lang? How about the puffy quilted duster? Remember when Comme des Garçons had ones just like it in the “Shirt” line?

Were the floral hem-embroidered trenches maybe too close a sampling of the ones Pierpaolo Piccioli made for Valentino, or not? Was one remembering correctly that the vests densely layered with zippered pouches had been done first by Demna Gvasalia at Vetements?

Though this observer could not quite place the yarn-bomb poncho, he was left with a nagging sense of having seen it before.

Anyhow, the box kite affixed to a jacket as an exoskeletal protrusion was way too obvious a reference on Mr. Abloh’s part to his compatriot Rick Owens for it to have been anything but a direct homage. Don’t you think?