This girl is on fire! Alicia Keys Opens a New Window. was giving Us all the feels as host of the 2019 Grammy Awards Opens a New Window. at the Staples Center in L.A. on Sunday, February 10. The 15-time (!) winner was the first woman to emcee music’s biggest night since Queen Latifah Opens a New Window. in 2005, and from her good vibes to her fab fashion, she already has Us hoping she’ll be back for the 62nd annual ceremony next year.

Right from the start, Keys made a powerful sartorial statement. Not shying away from wearing red on the red carpet Opens a New Window. , she arrived alongside hubby Swizz Beatz Opens a New Window. in a slinky scarlet Armani Prive gown and epic Bulgari jewels. Once the show got started, the songstress treated Us to a quartet of fierce jumpsuits that were all kinds of #HBIC goals. Oh, and her accessories game was equally strong with printed headscarfs, sculptural top hats and blinding bling.

But the clothes weren’t the only noteworthy part of her Grammys lewks. Keys revolutionized the red carpet years ago when she started sporting minimal or no-makeup makeup Opens a New Window. with her high-fashion ensembles, and she kept the trend going during the ceremony.

All told, Keys owned the awards show with her peace-and-love persona and cool-girl style. Keep scrolling to see all of her 2019 Grammys looks! 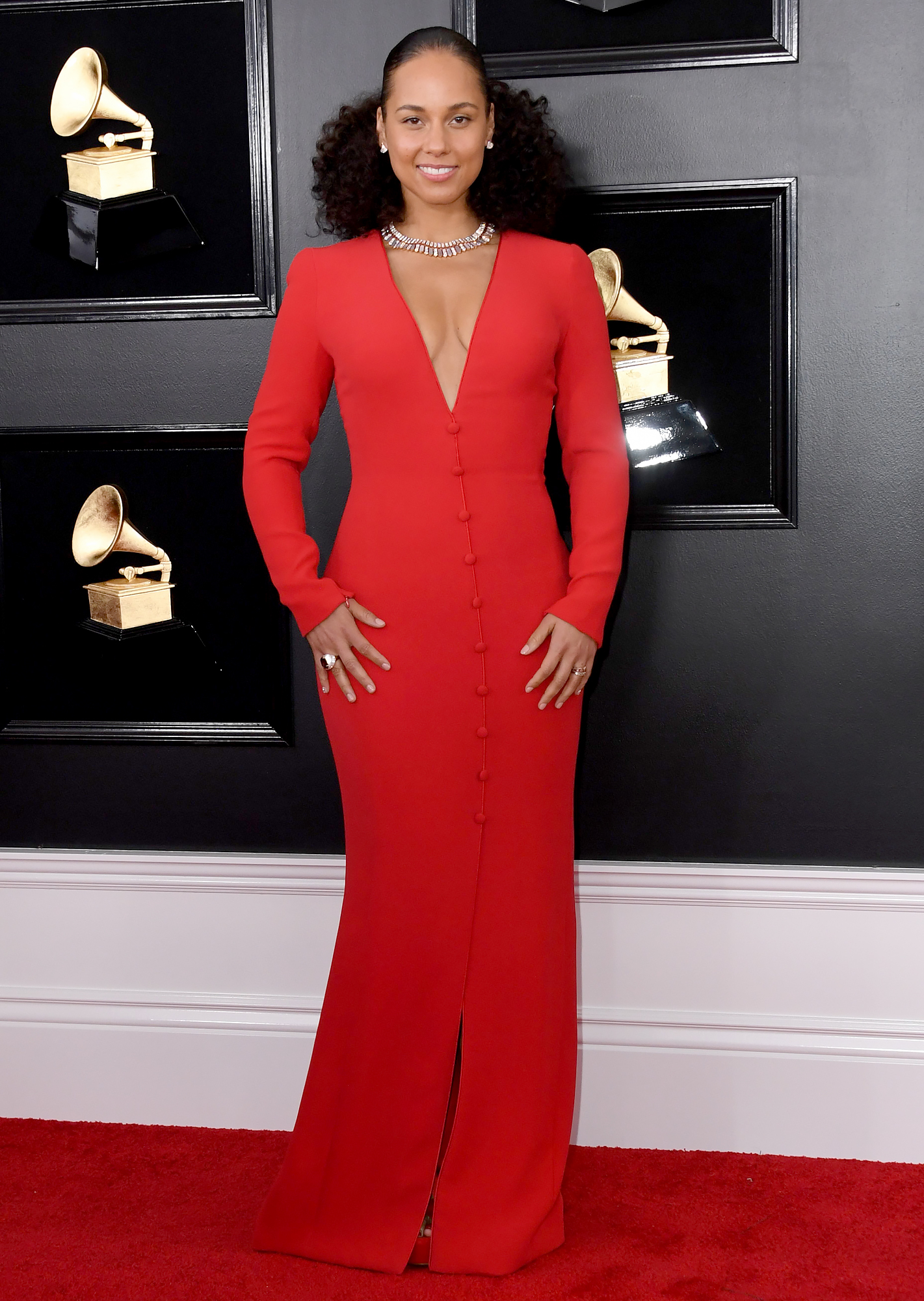 Kicking things off with a bang, the “If I Ain’t Got You” crooner rocked a crimson Armani Prive gown with Bulgari jewels and Aquazzura heels on the red carpet. 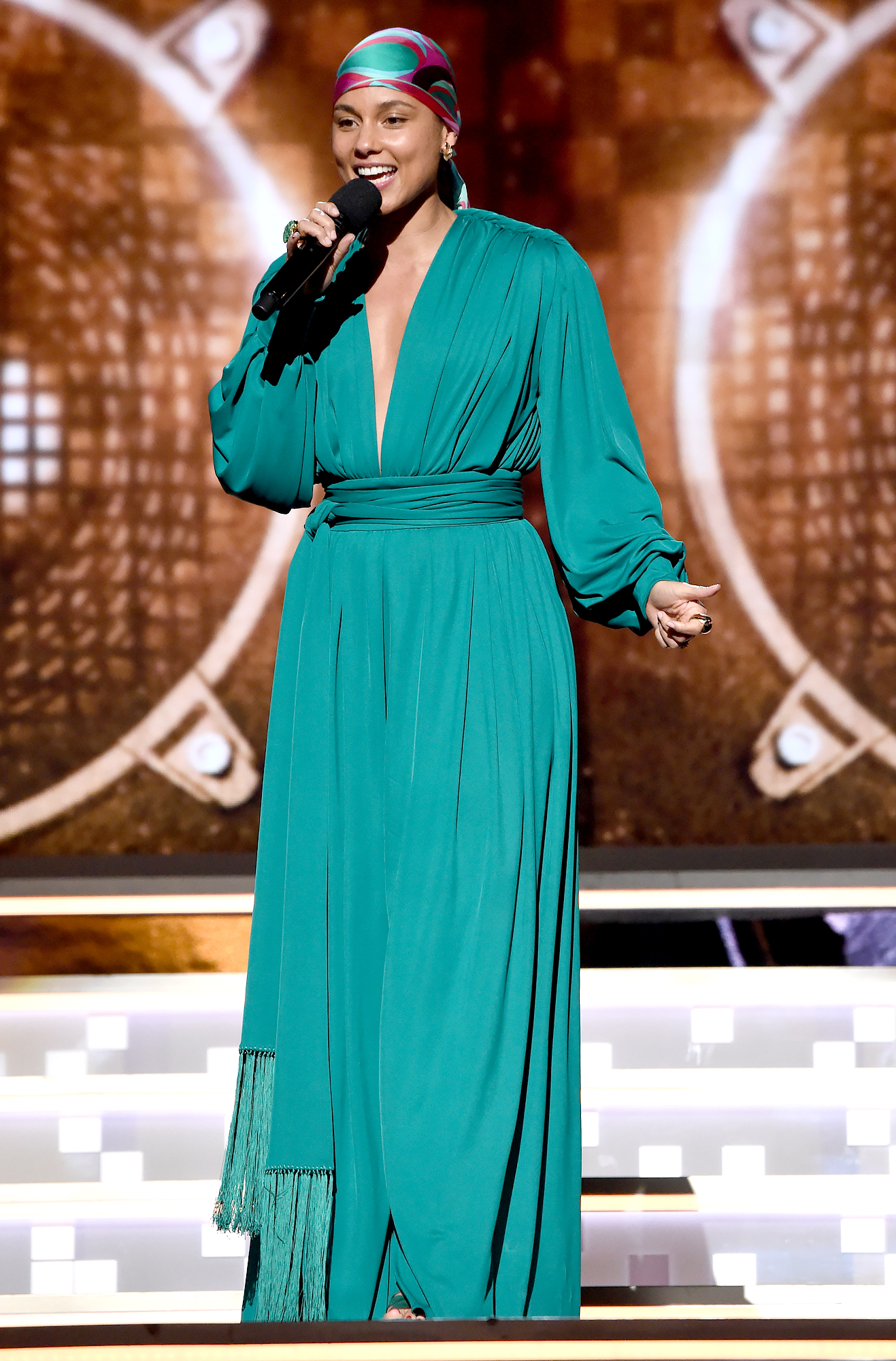 Giving Us all the ’70s vibes, Keys opened the show in a teal Oscar de la Renta jumpsuit that she paired with a printed Emilio Pucci headscarf and Jill Heller and Cartier jewelry. 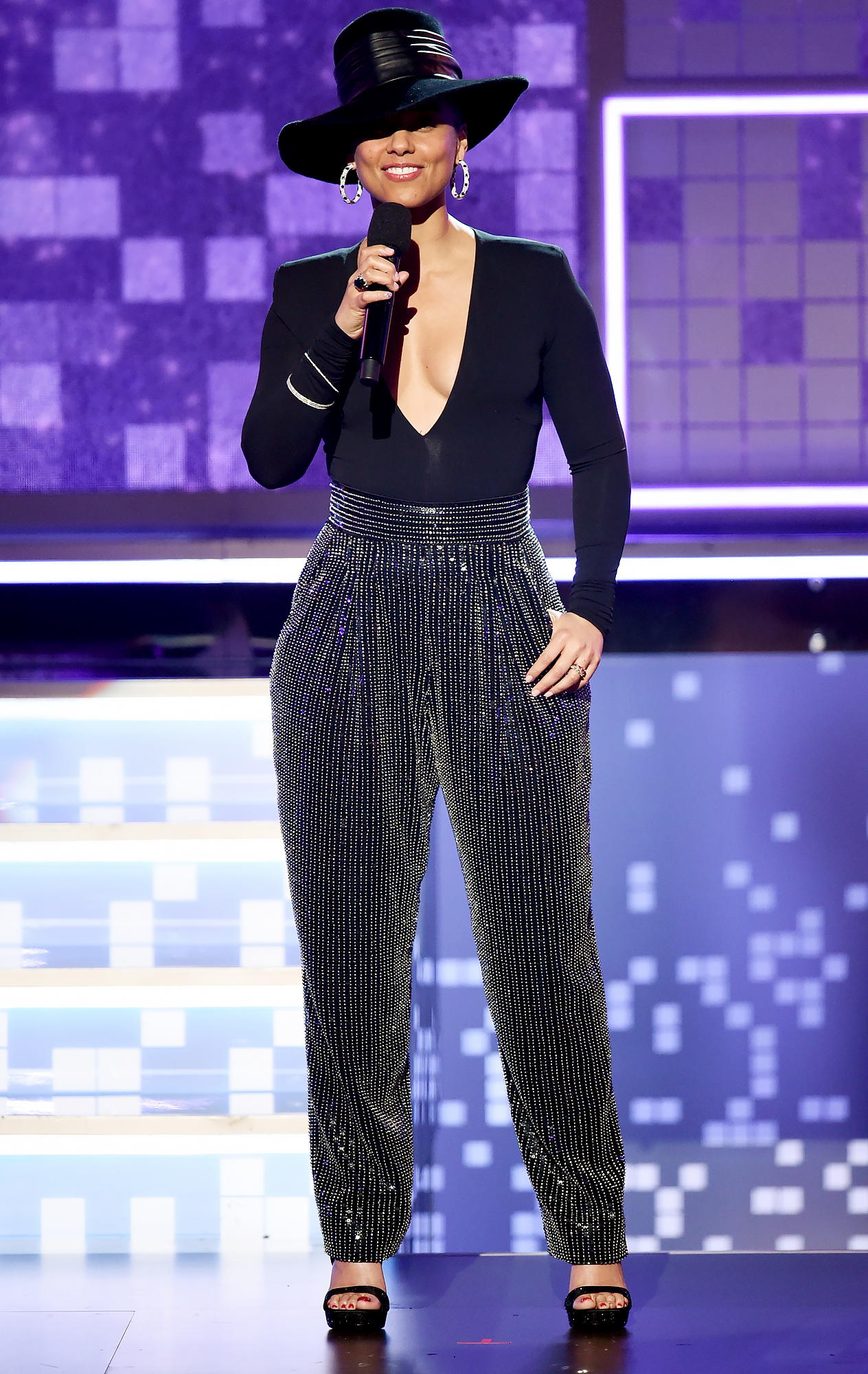 The only thing cooler than the songstress’ shimmering Balmain trousers? Her wide-brimmed hat. 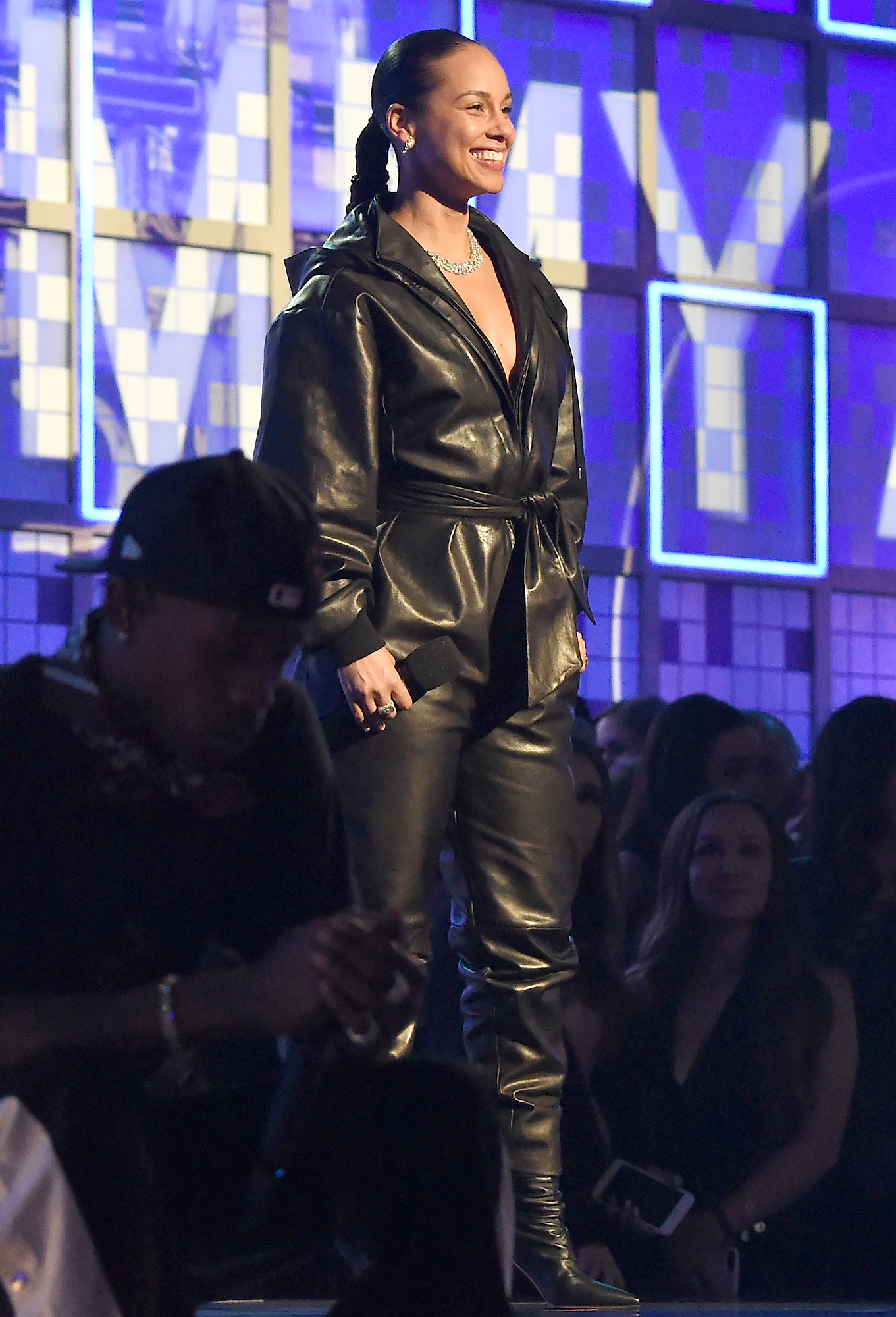 It doesn’t get much fiercer than the all-leather-everything jumpsuit and boots combo. 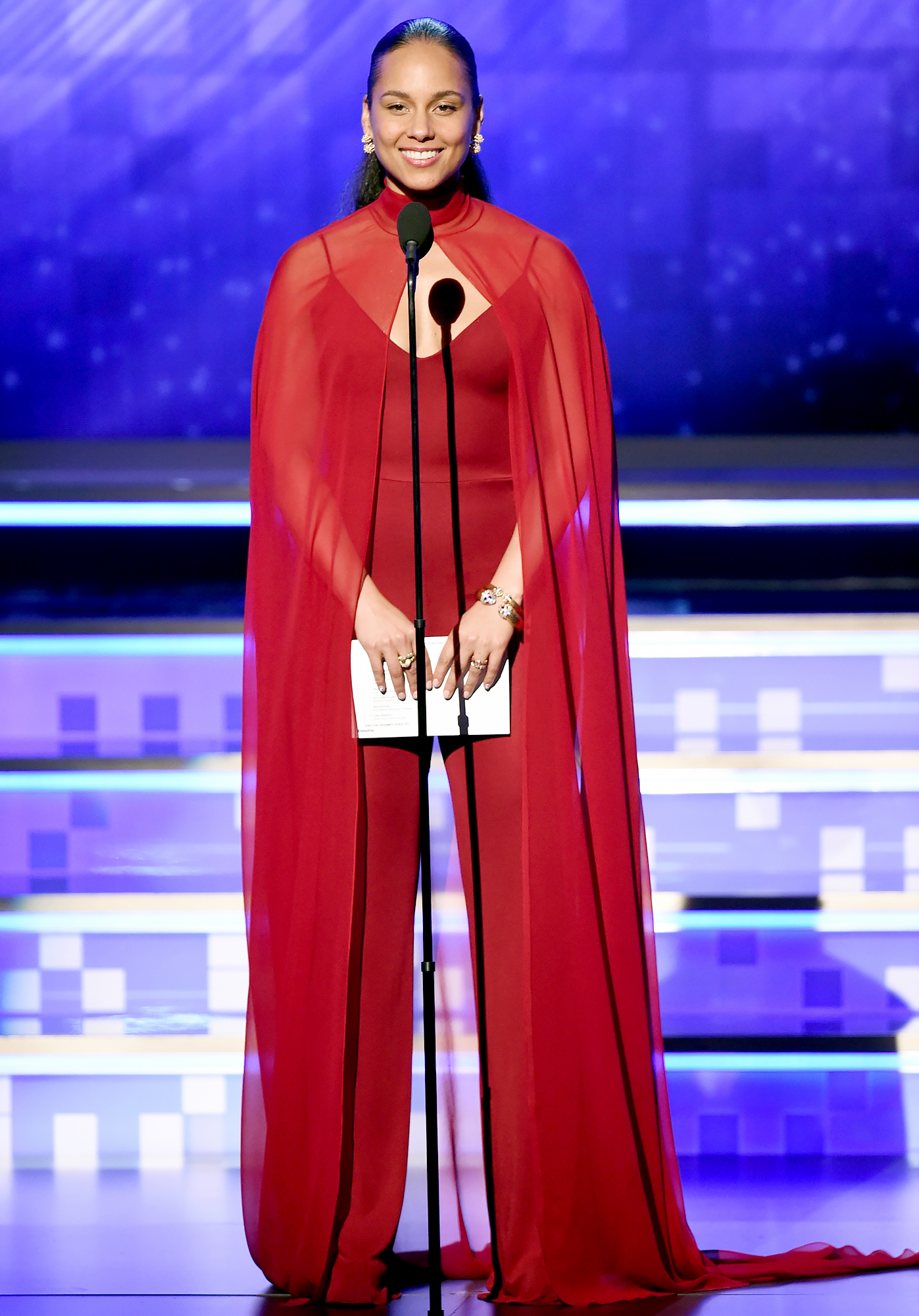 To present the night’s biggest honors — Record and Album of the Year — the host was back in red. This time, she rocked a cape-like Oscar de la Renta jumpsuit with David Webb and Cartier bling.