She’s only just arrived, but Annie Murphy is about to get kicked out of the Plaza Hotel.

The situation would be a fitting one for the character she plays on “Schitt’s Creek”: Alexis Rose, a fallen socialite whose family loses everything in a Bernie Madoff-esque Ponzi scheme. For Alexis, being ushered out of a New York City landmark would be yet another entry in a long line of humiliating losses, including getting dumped by her Greek shipping magnate boyfriend, saying goodbye to her wild life on the international party scene and moving from an affluent neighborhood in an unspecified city to the small town of Schitt’s Creek.

And, O.K., the cause for the hotel banishing Ms. Murphy — a rogue photo shoot staged in the lobby — is admittedly very Alexis too. It probably doesn’t help that, out of character, Ms. Murphy could still pass for a rich hellion of Instagram, with her waterfall of caramel colored hair and precision-winged eyeliner. One of the Plaza’s chief occupations these days is likely trying prevent glossy-maned women just like her from creating influencer content inside its storied walls.

“It would be hilarious if we got kicked out,” Ms. Murphy remarked. She remained un-Alexis-ly pleasant and patient through the negotiations with management until they were finally assuaged. (The Plaza eventually consented to a photo shoot as long as it was limited to one dead-end hallway and there was no flash photography. Otherwise, she was welcome to use the exterior of the building, where any old pleb with a selfie stick can pose.)

Then it was on to the Champagne Bar, which is less intimidating and exclusive than it sounds, but just as expensive. Ms. Murphy’s eyes widened as she read the menu, which includes a champagne and caviar special that costs $895. She instead settled on a glass of more reasonable rosé.

Ms. Murphy’s unfussiness can be explained in two ways, the first and cheapest being that she’s Canadian, and imbued with the kind manners for which her nation is so often parodied. The second is that fame and success remain relatively new to her. “Schitt’s Creek” just entered its fifth season, but only in 2018, when it began streaming on Netflix, did the show see a surge in its popularity stateside. (The program airs on the CBC in Canada and Pop TV in the U.S.) Alexis Rose is the biggest role Ms. Murphy has ever played, and before she was cast, she was close to quitting acting entirely.

“About two years into living in Toronto, my apartment burned to the ground,” Ms. Murphy said. “My husband and I ended up living in his grandparents’ attic for a year and a half.”

Soon thereafter, she went to Los Angeles and gave what she described as the worst screen test of all time.

“It was literally the worst thing I’ve ever done in my life,” she said. “So I finally got through this train wreck of an audition. There was 15 seconds of silence, and all they said was, ‘Woooow, O.K.’”

After what she called an “ugly cry,” Ms. Murphy determined it was time to find another, less brutal profession. (Also: She wanted to leave L.A.) Two days later, she got the audition for “Schitt’s Creek,” which films in Toronto. Her co-star Dan Levy — who is also the show’s creator — knew right away that she would make the perfect foil and sister to his character, David Rose.

Their tough love is introduced in the pilot episode, when the siblings argue over who has to sleep closer to the door in the motel room they now have to share. “You know what, David? YOU get murdered first, for once,” Alexis snaps.

Ms. Murphy is the kind of physical comedian who disappears entirely into her character, holding her arms like someone accustomed to balancing an expensive purse in the crook of her elbow. Her hands, limp at the wrists, move constantly, forming a posture Ms. Murphy described as “a T-rex playing the piano at an old-timey saloon.” As Alexis, she creates a persona that is so fully embodied that you almost miss how good she is at it. 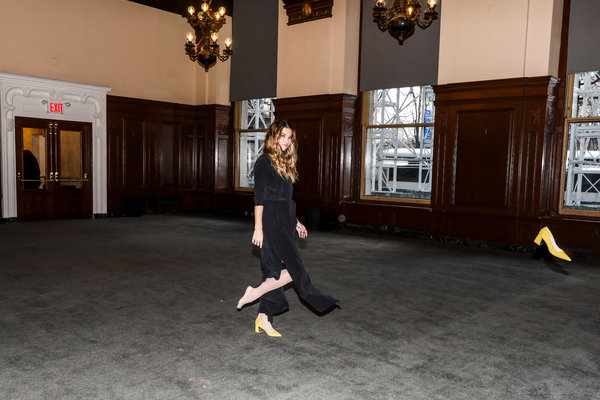 “To prepare, I watched one too many hours of ‘Keeping Up With the Kardashians,’” she said. “I studied the Olsen twins.” Ms. Murphy has always enjoyed celebrity gossip and pop culture, but not nearly as much as Mr. Levy, who writes all of the celebrity references into the show.

She was effusive with praise for him, as well as her other “Schitt’s Creek” castmates, including Catherine O’Hara and Eugene Levy (Dan’s father and “Schitt’s Creek” co-creator). Ms. Murphy admitted that the silk dress she was wearing was borrowed from her friend and castmate Emily Hampshire, who plays the owner of the rundown motel to which the Rose family decamps after losing their fortune, and that she was terrified of sweating through it.

“All of the women of ‘Schitt’s Creek’ are on a natural deodorant kick right now,” she said.

Ms. Murphy said that the show has made her more aware of fashion. “Catherine and I do hours and hours of fittings,” she said. “Sometimes we have to resort to the internet because we come out of the room with two arms out of the neck hole, completely trapped in whatever article of clothing it is. Some of the clothing is so complicated and expensive. I’m constantly walking on eggshells because I’m wearing a $10k outfit.”

As for whether or not she’s actually damaged anything, she said: “There have been a few close calls. I’ve ruined many pairs of shoes, especially during the first season because Alexis was doing outdoor community service” — a result of driving her car into a Prada store — “and I had to tromp around on gravel roads in Jimmy Choos. Dan would be like, ‘Ughhh,” but he’s the one who wrote it!”

Ms. Murphy finished her second glass of wine and decided it was time to quit the grand opulence of the Plaza for a more relaxed scene: her friend’s apartment in Brooklyn, where she planned to watch the season premiere and get tarot readings with some of her castmates.

More than anything, she said, she was excited to show Ms. Hampshire that she hadn’t ruined her dress.