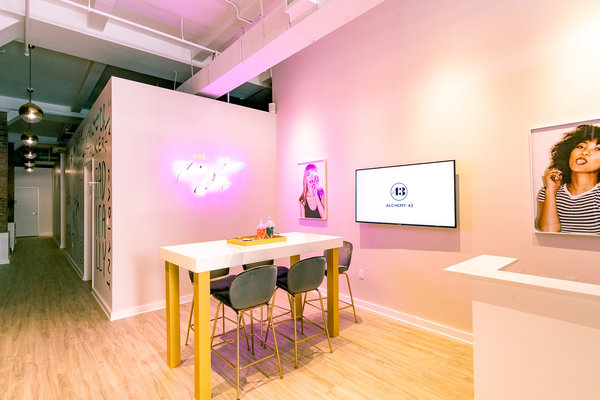 There’s nothing secretive about getting Botox and fillers at Ject in the West Village.

The three-month-old injectable beauty bar has a glass front with its name hand-painted in 23-karat gold. Treatment spaces are separated only by curtains. There’s a photo booth, with a swirly gold, black and green mural that incorporates the company name, for customers who want to show off their freshly filled faces on social media. As the company recently Instagrammed: “Adieu, Taboo.”

In 2018, injections of Botox — the No. 1 aesthetic procedure since 1999, according to according to the American Society of Aesthetic Plastic Surgery — were up 16.3 percent from the year before. Fillers were up 12 percent in the same time frame. Both procedures require regular top-ups.

With that popularity comes, almost inevitably, a wave of places that specialize in these injections, aiming to make them as accessible (walk-ins welcome!), acceptable and fun (in name, if not in needle) as a Drybar blow-dry.

“Injectables don’t need to be scary, and they don’t need to be done in a secret garage,” said Gabrielle Garritano, a physician assistant and a founder of Ject. The curtains, she said, were a choice, to make the place feel more salon, less medical office — and so clients may see others getting injected.

“You see people getting their hair blown out,” she said, as if the two are equivalent.

Ject — the short name was chosen, in part, so it would look better on the forthcoming booking app — has plenty of competition. At Plump, in Chelsea, which is designed to look like a bistro, with dark wood floors, bar stools and a tea bar (serving anti-inflammatory elixirs), patrons can choose the $1,099 “Instaready Cheeks” or $240 “Goodbye Gummy Smile.”

They can then pose in front of an art installation of empty Botox vials or a millennial pink (the company calls it “Plump pink”) mural, where a small sign nearby reads: “Great art is meant to be shared. So are great results.” There’s even a prop: a pink board with letters spelling out “I Got Plumped.”

A second location will open on the Upper East Side in May, and there are plans for NoLIta, then Miami, where the founder Dr. Alexander Blinski (he prefers “Dr. B”) grew up.

Alchemy 43, which has four cucumber-and-lime-scented locations in Los Angeles, opened in the Flatiron neighborhood on April 24. The company, which says it has raised more than $5 million in funding, including from the Drybar founders, provides clients with fruit-garnished sparkling water in champagne flutes (pre-procedure alcohol is not recommended), and has a granite tabletop co-working space in the lounge. (À la Drybar, Alchemy also offers memberships.)

And BotoxLabb (the double Bs stand for “beauty bar”), a sea-foam-green-bathed chain based in Miami from the founders of the 1990s makeup brand Joey New York, is eyeing New York after introducing sea foam green outposts in Scottsdale, Ariz., and Los Angeles.

The company says that most of its clients are younger than 35, and many say they like the atmosphere of these places, and the focus on injectables.

Madeline Whaley, 29, an executive assistant in Beverly Hills, Calif., spotted an ad for Alchemy 43 (there are 43 muscles in the face, some researchers say) on Facebook and made the switch from a dermatologist.

“At the doctor’s office they know what they’re doing, but I always got the feeling it’s not their highest priority,” said Ms. Whaley, who gets Botox and fillers. “They spend a long time with you at Alchemy, and you feel really catered to.”

She has a $99-a-month membership, which gets saved up, as in a bank account, for her use; members also receive gift cards and, after a year, a free treatment, like lip or cheek filler, worth about $700. (Prices are generally cheaper than at a doctor’s office.)

According to the company, Alchemy customers spend an average of $475 per visit, and that figure is rising. As part of an initial consultation, Alchemy offers a 3-D sneak preview of what each treatment will look like on a client’s face.

Because of it, those who come in for the upper half of the face — eyes, forehead, cheekbones — often end up adding lower face treatments, said Nicci Levy, the company’s founder. (Ms. Levy formerly worked for Allergan, the maker of Botox, for which she was the highest-volume-selling representative. Her territory was just three blocks in Beverly Hills, ZIP code 90210.)

No matter the beauty bar of choice, that first shot of Botox can be a gateway drug. Every consumer interviewed for this article acknowledged multiplying treatments, and wanting to ramp up frequency.

“It’s so addicting,” said Olivia Grubman, 30, a resident in obstetrics and gynecology at Mount Sinai Hospital who started with Botox at Ject and then accessorized with cheek fillers. “Now if I see the tiniest little wrinkle on my forehead, I’m like, ‘I’ve got to go back.’”

On a recent Friday night, Dr. Grubman collected 10 friends (male and female) for an injectables party at Ject. As guests nibbled vegan desserts from Jack’s, the Botox virgins got their treatments first to blunt the nervous anticipation.

Afterward, the party moved across the street to the Happiest Hour for drinks. Those with cheek fillers were perhaps marginally less happy. “When you laugh, it feels sore, but it’s not so horrible,” Dr. Grubman said.

What may get lost in all the merriment is that these are medical procedures with risks, and not all places have a doctor on-site. Rules about who can inject vary from state to state; New York allows physician assistants and registered nurses to do so.

Grant Stevens, the president of the American Society of Aesthetic Plastic Surgery, said he is less concerned about Botox than fillers. Complications can include a Spock eyebrow or a dropped lid from injecting the wrong muscle, but the effects are temporary.

Still, he notes that living with facial asymmetry even for a few months can interfere with one’s work and quality of life.

Fillers, however, can be injected into the wrong place — between blood vessels, for example — resulting in complications that can include blindness. “It’s not as rare as we would all like to think,” said Dr. Stevens, who admits to thinking about it every time he gets fillers.

He doesn’t think it’s necessary to have a doctor inject. (“Heresy!” he said, cheerfully.) But he suggests asking, at the very least, if your beauty bar of choice has a “crash cart,” which includes vials of a “doggone expensive” enzyme called hyaluronidase that can reverse an inadvertent intravascular injection of hyaluronic acid fillers like Restylane and Juvéderm. Fillers like Radiesse, which are made of other substances, are not reversible, he said.

“Give it all the cute names you want, but it’s not a hair salon,” Dr. Stevens said of the new breed of beauty bars. “It’s the practice of medicine.”