It was the Tuesday after Thanksgiving, and Ms. Winter, a dog lover, had come to Animal Haven, a shelter on Centre Street in Lower Manhattan that finds home for abandoned dogs and cats.

In town to promote “Modern Family,” the popular sitcom she has starred in for 10 seasons, Ms. Winter had taken the afternoon off to volunteer at the shelter and record a public service announcement.

In Los Angeles, where she lives, Ms. Winter works with the Westside German shepherd Rescue and American Humane. Four dogs (Casper, Chloe, Cash and Cleo) populate the Culver City home she shares with her boyfriend, the actor Levi Meaden.

“Our house would be filled with dogs if it was up to me,” she said. “But four is our max right now. We try to give them all enough attention.” 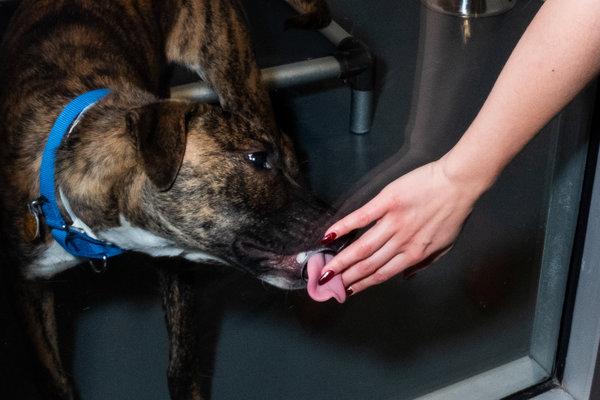 At Animal Haven, she wanted to do whatever was needed, with one request: no cats. “I’m allergic,” she told Tiffany Lacey, the executive director of the shelter. “I’m not going to get hives or anything, just a seriously stuffed up nose.”

Ms. Lacey said that cats were kept in a separate area and handed Ms. Winter a purple volunteer shirt that clashed cheerfully with her plaid pants and red boots.

For her first job as volunteer, Ms. Winter, who has a sweet, bright voice and the outsize eyes of an anime character, was assigned to romp with Delilah, a 4-year-old silver terrier mix rescued from Puerto Rico. “Oh, girl!” Ms. Winter said as she scratched her ears. “So sweet.”

Delilah had other admirers to greet, so Ms. Lacey took Ms. Winter on a tour of the kennels downstairs, comfortable rooms brightened by a skylight. She waved to the dogs in each berth as she heard stories of their rescues.

One had been shot in Alabama, one had been dragged behind a car in Florida, one had recently arrived from Iran. She put her hands out for the dogs to sniff, and a few of them pushed their muzzles though cutouts in the windows to offer licks. “Hi, babes!” she said.

Ms. Winter is indulgent with dogs. At home, they have free rein (“Our couch will never look nice, it won’t, and I’m O.K. with that,” she said), and the three older ones usually find their way into bed. Cash, an Australian shepherd mix, “sleeps on our heads,” she said.

Ms. Lacey led her to a room where two older Labradors, Dante and Diego, sat gloomily. Their owner in the East Village had died. “I’m coming in, boys,” Ms. Winter said. The dogs twined around her, and she stroked them until they seemed a little more cheerful. “Happy boys get happy treats,” she said soothingly. “You boys get a lot of treats today.” (They have since been adopted, together.)

Her task complete, Ms. Winter eased out of the room, headed back upstairs and grabbed her jacket. Her next assignment: walking Rumple, a chunky Staffie mix with cropped ears and a white belly. He sauntered outside, snuffling the occasional curb, as Ms. Winter held his purple “Adopt Me” leash.

He declined to relieve himself but seemed to enjoy the fresh air. “There’s a lot of smells,” Ms. Winter said.

It took 15 long minutes to walk Rumple up the block and back. When Ms. Winter returned, it was time to find the right dog for the public service announcement, which would appear on the shelter’s Instagram. This is the kind of social media Ms. Winter likes. As for the rest of it, she said, “Everyone’s watching at every moment, so that’s really difficult to just live life,” she said.

A star of “Modern Family” since she was 11, Ms. Winter is now 20. (Her plans for her 21st birthday: “I’m definitely going to go to Vegas,” she said. “I’ve played poker since I was 6 years old.”) Fans have seen her grow up, on screen and off, and have scrutinized her body, her clothes, her relationships.

One of the nice things about dogs? They don’t judge.

But most dogs don’t have Ms. Winter’s comfort in front of the camera. Shannon Kirkman, the shelter’s director of marketing, first tried to film the spot with Marty, a fawn-colored dog rescued during a recent snowstorm in New York City. But Marty was not ready for his close-up, skittering away when treats were not on offer.

“He’s like, ‘I don’t like this woman’s pants,’” Ms. Winter said. The plaid was a bold choice. Maybe dogs do judge?

Tigger, a bouncy brindled dog that Ms. Winter had bonded with downstairs, was next. They frisked together, but despite Ms. Winter’s encouragement, the camera wasn’t his thing. “You’re like my dogs,” Ms. Winter said, as she threw him a squeaky toy. “You don’t pay attention.”

One more dog was tried before Ms. Winter finally succeeded with Abbi, a golden Chihuahua who lives in the shelter with her sister Ilana. Abbi is described on the shelter’s website as a nervous girl, but she was content to nestle in Ms. Winter’s arms. She was perfect co-star material.

“Please consider donating and help the lives of these beautiful babies,” Ms. Winter said to the camera, as she petted Abbi.

The video was posted that afternoon and raised about $40,000, twice the shelter’s goal.