THE dating game can be tough – and one guy had a rather unfortunate experience before he’d even met up with a woman he had arranged to meet.

It turned out that the girl wanted to cancel before they even met, and he found out through a very brutal Snapchat photo. 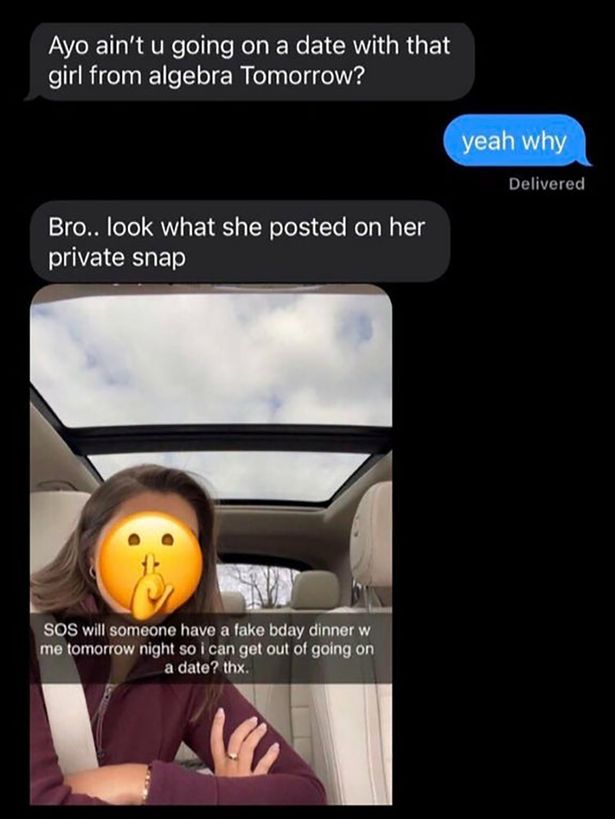 The lad was sent a text message from his friend which informed him of the bad news.

His pal messaged: “Ayo ain’t u going on a date with that girl from algebra tomorrow?”

The unlucky dater had replied saying: “Yeah, why?”

Sadly, the friend replied: “Bro..look what she posted on her private snap.”

He attached a picture of the woman’s Snapchat story, which featured a selfie.

Her caption said: “SOS will someone have a fake bday dinner w me tomorrow night so I can get out of going on a date? Thx.”

The text messages and photo were shared on Reddit and many people replied saying how bad they felt for the rejected guy, but some said he had dodged a bullet.

One said: “The dude showing the pic to his friend is a g, you should have friends like that.”

Another added: “Why go through all that effort? F*** sake, just say no if you're not interested.”

“What sort of mental gymnastics goes into accepting a date, and then making up an excuse to get out of it?”

A third wrote: “If I was the guy, I would just show her the pic when she comes with the excuse and say that I wouldn’t want to go out with a person like her. And block.”

Previously, a woman shares nightmare texts after she cancels date because of a ‘bad feeling’ – and users agree she ‘dodged a bullet’.

And another woman claimed she busted her date checking out other women because of a reflection she saw in his glasses.