If ever there was a time for the prediction to come true, however, it would be now: a moment of multiple crises, when such displays of conspicuous consumption are lit with the warning signs of Louis XVI and the end of an era.

Not to mention the fact that even those who can afford the fabulous creations no longer have anywhere to wear them, and cannot even travel to the ateliers to see them. 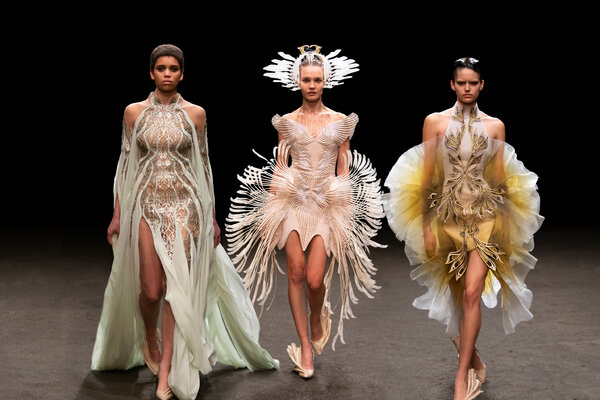 Yet, as the Davos power brokers meet on Zoom to pontificate about “The Great Reset,” the fashion power players have actually done it. Or at least some of them have. Instead of abandoning the couture, with all the associated jobs and historical know-how it involves, they’ve rethought it, pushing it (and themselves) into a different, more inclusive and relevant form. One that tells a certain story about today.

It turns out contemporary couture is not an oxymoron after all.

As Alber Elbaz said before introducing his new AZ Factory label: “The essence of couture is not a $150,000 dress and the red carpet and 300 hours of embroidery. The real essence of couture is a laboratory and techniques; experiment and the body.” To wit: the 11 dresses he showed that use technology to create ergonomic knits that embrace (literally and metaphorically) all body types, rather than a virtual velvet rope for only one.

He wasn’t the only one challenging the premise. This is also why the artist Sterling Ruby unveiled his second clothing collection at couture, even though he acknowledged in a video call beforehand that the high-craft quotient of the colonial-dame-meets-skate-kid-meets-workwear pieces weren’t couture at all in the old sense, but rather in the sense of being about the hand and the studio. (It was kind of like the couture version of outsider art.)

“Sometimes perfection,” he said, “is a little soulless.”

It is why Viktor & Rolf has made upcycling its focus, proving that scraps of old brocades, laces and cellophane can be patchworked together into a glorious smashup of a party dress. Why Iris van Herpen’s exploration of the “wood wide web,” rooted (pun intended) in “Entangled Life,” Merlin Sheldrake’s book on mushrooms, and expressed in laser-cut creeping lace and blossoming frills and quavering fronds of mylar, was so intelligently elegant: technology connected to the earth through the body.

And why, at Schiaparelli, Daniel Roseberry said, “it was time to move away from some misogynistic idea of what couture should be, all about frills and daintiness,” and then showed molded breastplates made to emphasize the six-pack in leather and bright pink beading. (They had been teased by Kim Kardashian West over Christmas, when she modeled a Grinch-meets-Hulk evergreen version.) There were also taffeta hoodies on steroids. Down with the damsel in distress; up with the woman as superhero.

Or, when it came to some shows, up with the man. At Valentino, Pierpaolo Piccioli said he thought it was time to divorce couture from “beautiful, dusty pictures of the past.” And then he showed a collection of extravagant ease: double-face capes made from hundreds of hand-sewn squares atop cropped trousers and a generous white poplin shirt; a blouson trench coat; what looked like ribbed knitwear but turned out to be trompe l’oeil rolls of silk dusted in sequins — on both sexes.

“I was interested in the idea of a future with no boundaries, where we can wear a common wardrobe,” Mr. Piccioli said. Plus towering metallic platform shoes, stretching the silhouette to the sky.

As it happens, Kim Jones also had men on the runway for his couture debut at Fendi. Like his women, they were also outfitted in marbleized suits with power shoulders, courtly dresses with portrait necklines and fluted sleeves, and sweeping capes.

But while the gender representation may have been forward-thinking, his inspiration was more predictable in nature: “Orlando” and the Bloomsbury group, as seen through a Medici lens and leaden with expectation, like a Bernini fountain trying to stretch its frozen limbs into life. This was Mr. Jones’s first full women’s wear collection. (His other job is as artistic director of Dior Men.) And though you can understand why he may feel the need to prove his legitimacy by designing firmly in couture’s most obvious vernacular, he leaned too heavily on the old shibboleth of “the dream.”

There’s always a lot of talk, when it comes to couture, of the value of escapism, and the balm a fairy tale can represent; a belief that beauty is justification in itself, because even if you can’t buy the clothes, you can fall swooning into the reverie they represent. And certainly, in the time of Netflix’s “Bridgerton,” it’s hard to argue with the appeal of a really well-dressed fantasy, or to fault designers who shelter in that velvet-cushioned comfort zone. (Though even that pop culture confection had a soupçon of social commentary in its drawers to provide necessary ballast.)

See, for example, Virginie Viard of Chanel, who abandoned her past attempts to ram 1980s modernity into her ready-to-wear and instead imagined a wedding party in the floral-strewn expanse of the Grand Palais complete with delicate tea dresses and slouchy bouclé vest-and-trouser suits, lavishly full skirts with simple button-up shirts and even a bride who rode in on a white horse.

Or see Giorgio Armani and his Privé collection, with its aquarelle layers of beaded organza, velvet and tulle, drifting languidly through the empty halls of the grand 17th-century Palazzo Orsini (also his company headquarters).

Or Maria Grazia Chiuri of Christian Dior, who teamed up once again with the Italian filmmaker Matteo Garrone to create a soft-focus cinematic parable based on the tarot deck beloved by the house’s founder.

A young woman wanders through the twisting corridors of an ornate old palace in a journey of self-discovery, encountering the High Priestess, Temperance, Justice and Death — all clothed in intricately worked, filigree robes — before finally entering what looks like an ancient hot tub to meet, make out with and then merge into, her naked masculine self (who has shed what looked like a pretty great little black trouser suit).

Ms. Chiuri said she chose to show the collection as a movie because, to her, couture was about emotion and storytelling, and the tarot reflected the quest we are all experiencing as we navigate our lives today. Instead of elucidating that resonance, however, the art house schmaltz of the scenarios simply obscured it, casting an air of Renaissance-lite over the clothes rather than currency, connecting them to the past rather than the future.

We all need to learn from our history, no question, but ideally, as the adage goes, in order not to repeat it. In fashion, as in life.