CLEANING your whole house doesn't come easy – especially when you have to work, manage homeschooling and look after children too.

But these cleaning-obsessed mums have come up with the best budget hacks – that cost no more than £1 – and that ensure the tough scrubbing is slightly easier.

Using cheap products – such as the Pink Stuff paste – as well as unusual household objects like hand sanitiser and pennies, these ladies have come up with the best cleaning tips.

Rebecca, 37, from Bedfordshire said she loves coming up with cleaning motivation videos to help other families.

The receptionist, who is also a busy, working, single mum, said she enjoys using clever hacks as cheap as £1. 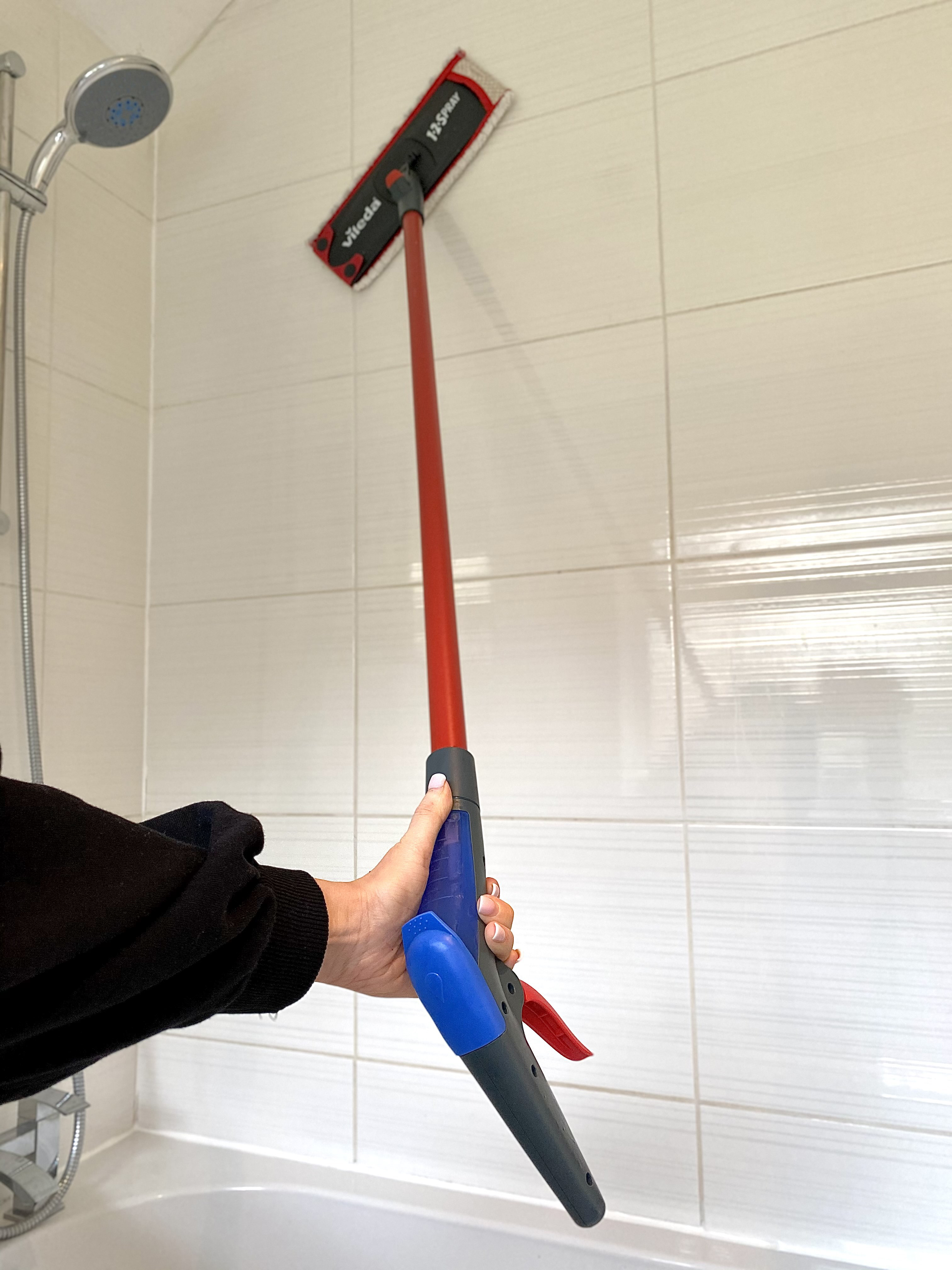 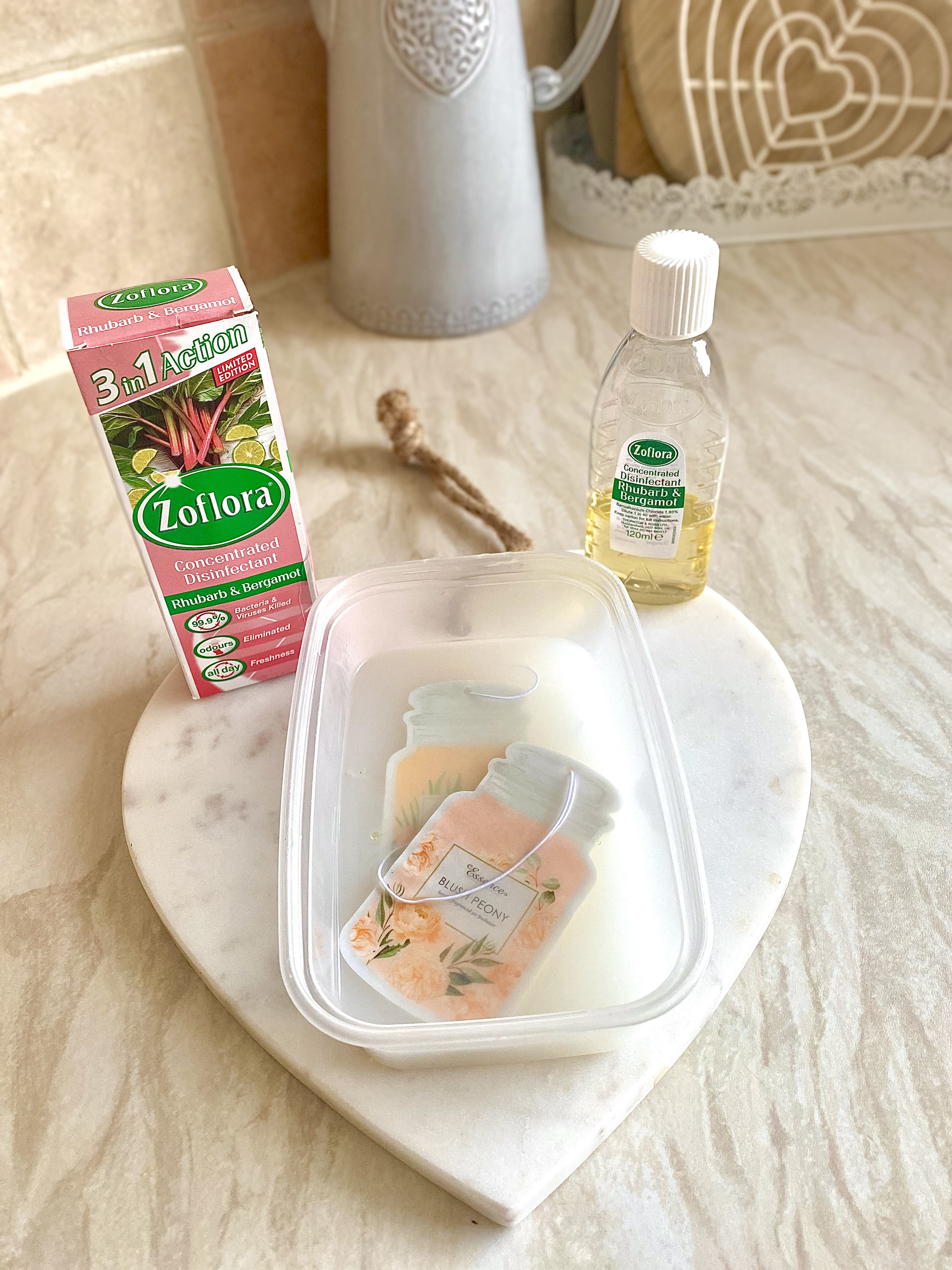 The mum, who shares her cleaning tips on her Instagram page, said: "Instead of buying expensive handheld vacuum cleaners, I buy a cheap £1 lint roller.

"It’s much more cost effective and it can be used all around the house.

"I also have a hack to stop me buying new air fresheners. I just buy my favourite Zoflora for £1 and soak the old air fresheners in the solution!

"And instead of using expensive tile scrubbers to clean the bathroom, I have a better idea.

"All I need is a clean mop, filled with an inexpensive cleaning solution and it does the job just as well!’ 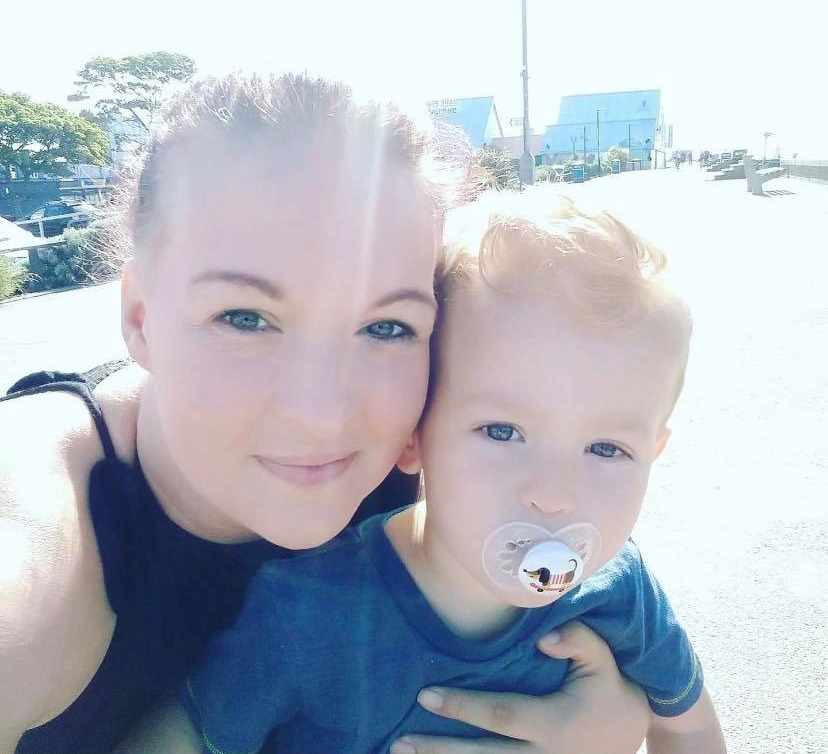 Elsewhere mum Liz Hardy said she came up with a clever cleaning hack to get pen marks out of a velvet chair after her little boy accidentally drew all over a new one with a blue marker.

Thankfully the mum, who shared her hack on Facebook, was able to come up with a cheap trick to make the chair look as good as new.

She cleverly used £1 hand gel and a dry cloth – and miraculously, the stain disappeared. 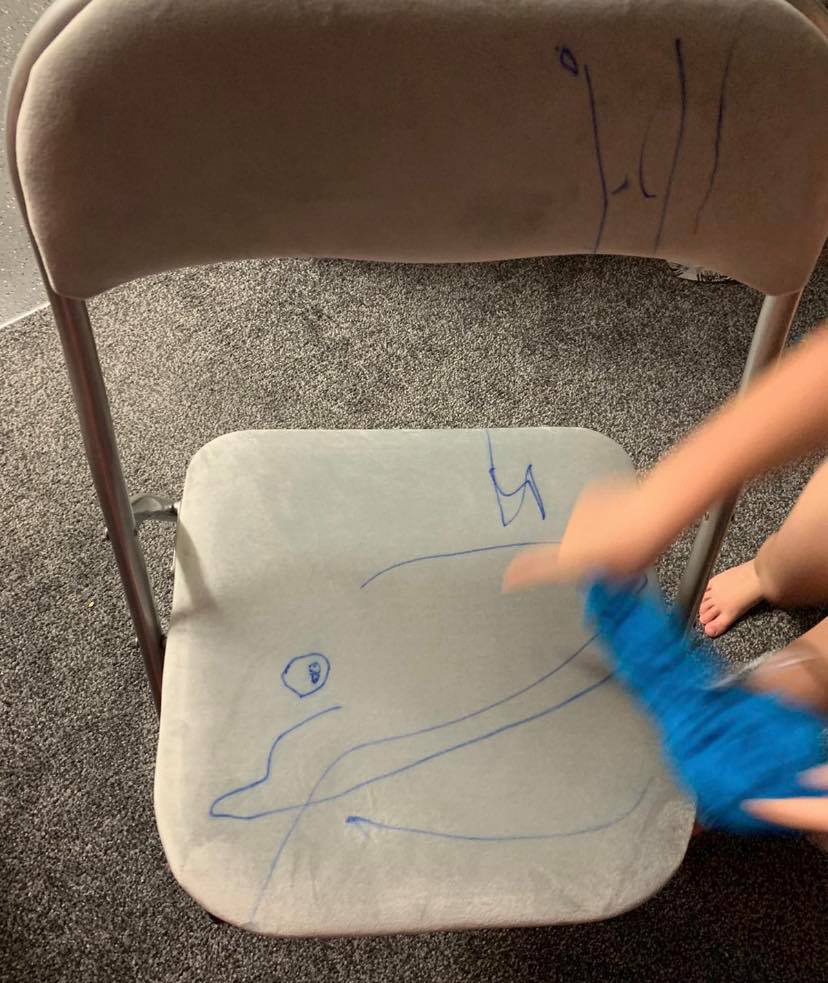 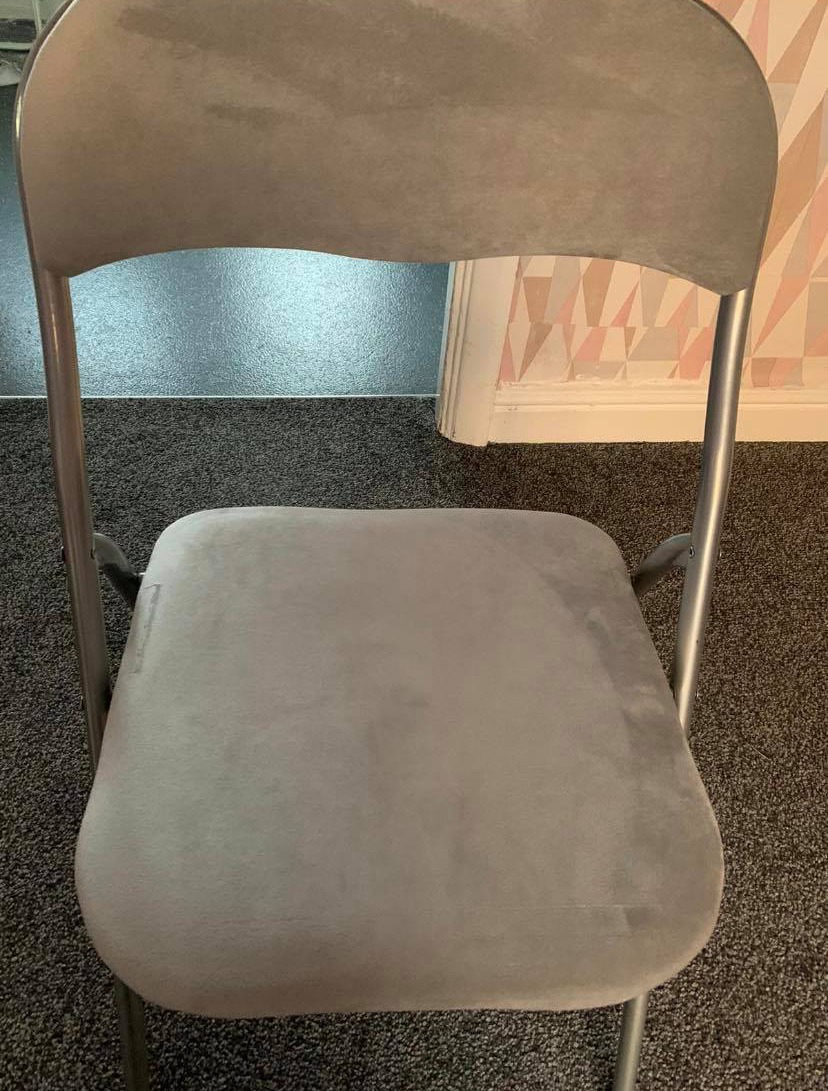 She said: "Luckily I got a tip from a Facebook cleaning page and it worked wonders. I had only bought the chair the day before!

"The hand gel was only £1 – it was actually out of the children's school bags – then I just used a dry microfiber cloth.

"I squirted the gel onto my cloth then rubbed over the pen stain bit by bit until it went!" 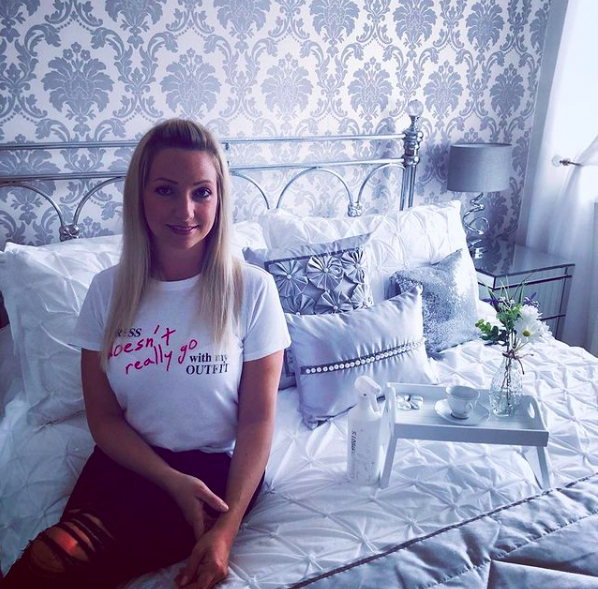 But mum-of-two Debbie, from Wolverhampton, said she loves to "scrub the hell out of something" when she’s feeling low.

The 34-year-old investigator for the Legal Ombudsman admitted cleaning is her "go to" when she is upset or anxious.

She shares her cleaning hacks online and said her clever tricks are perfect for her busy lifestyle.

Debbie said: "I find it is a release for me to scrub the hell out of something as opposed to getting upset or worried. 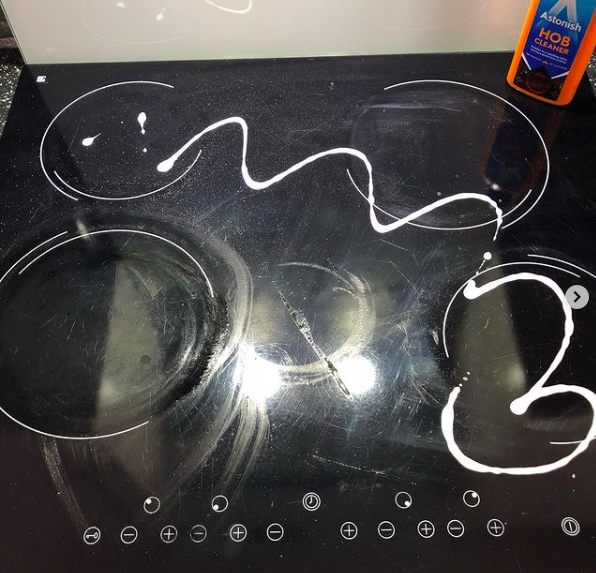 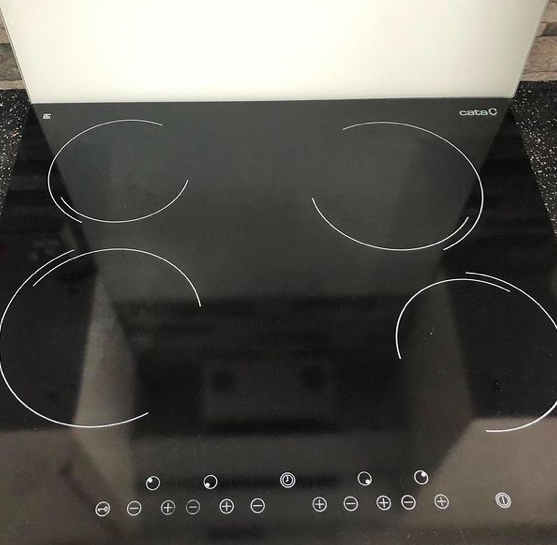 "These cleaning hacks help me to balance my work and home life because I can get the jobs done quickly with minimal effort and cost.

"That means I can spend more time and money on my family which is the most important thing to me.’

One of Debbie’s hacks involves using the Pink Stuff cream – she puts some on a clean damp cloth and wipes in circular motions.

She said kitchen pans look "new" and it only costs her around 89p. Another clever hack she uses comes in handy after a Sunday fry up.

Debbie said: "A Sunday fry up always leaves the hob in a right greasy mess. I used an Astonish hob cleaner which is less than £1 too!" 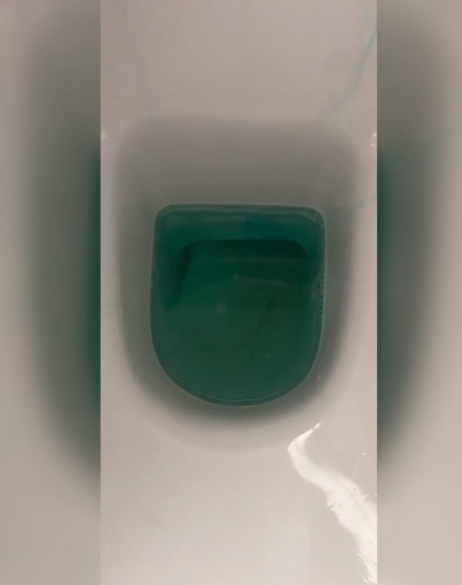 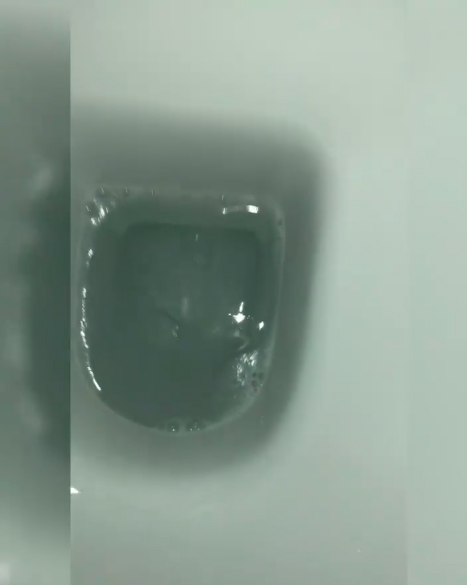 The cleaning-obsessed mum said one of her favourite cleaning hacks is her ‘game changing toilet hack – which only costs 10p per clean.

She cleans the toilet every day by pouring bleach around the rim and in the bottom.

The bleach keeps the bottom of the bowl white however Debbie noticed that it would discolour her Duck discs.

She added: "I use denture tablets to clean the bottom of the toilet bowl which is only about 10p a tablet. I have a new tried and tested cleaning hack that I think is amazing!

Vote for your Fabulous Mum of the Year and WIN

Do you know a mum who deserves some extra recognition? We want to pay homage to the best mums in Britain.

During the pandemic they’ve been busy juggling childcare, homeschooling and work, with the added stress of worrying about the health of elderly relatives and vulnerable friends.

It’s never been a harder time to be a mum, so this year it’s even more important to honour the amazing women in our lives.

Nominate her for our Fabulous Mum Of The Year Award and she could win an overnight stay for two at a Champneys spa of her choice complete with a Gold package, which includes four relaxing treatments for the ultimate pampering experience.

Two runners-up will Champneys goodie bag worth £50 plus a £100 M&S voucher and £200 Nutmeg at Morrisons voucher, and all three mums will enjoy a makeover with our glam squad before taking part in a photo shoot for the magazine.

If you want to nominate a mum then fill in the form here.

To enter, upload a photograph of the mum you are nominating and explain why they deserve to win.

The deadline for entries is Sunday February 14 and one winner and two runners-up will be announced on Sunday March 14. Good luck – we can’t wait to hear from you!

"I swapped the bleach for Duck toilet gel and while it looks and smells amazing, the bottom of the bowl has started to discolour.

"I decided to try dropping a steradent denture cleaning tablet in the bottom of the toilet and it worked.

"After leaving it for 20 minutes it was spotless! Not only does it clean the toilet, it disinfects it too.

"This is definitely a game changer for cleaning the toilets and it’s so cheap too! I paid 89p for a tube of tablets." 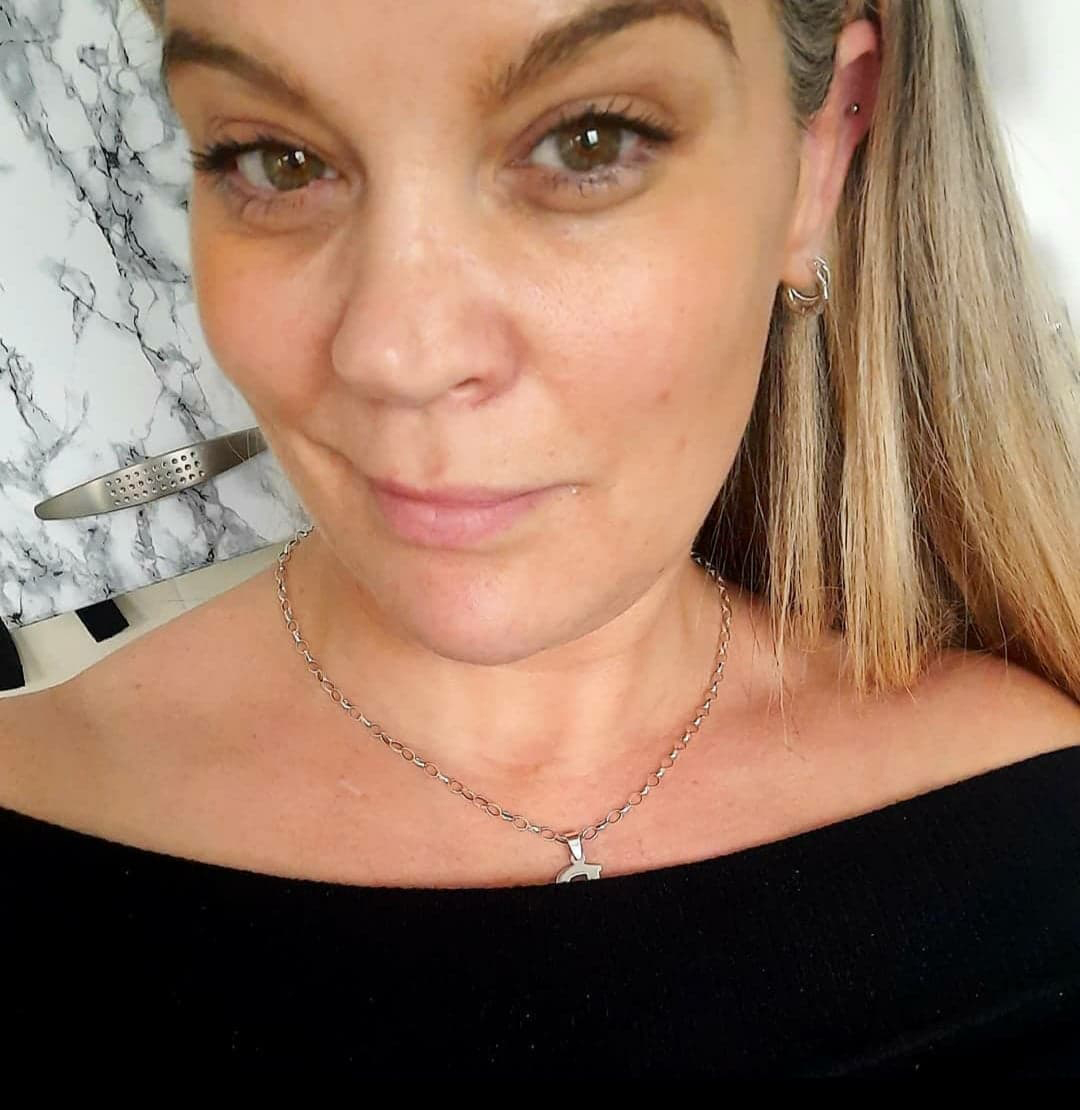 Elsewhere mum Maria Frances said she bought a second-hand washing machine and found a clever tip to clean it up and make it look as good as new.

The mum, who shared her incredible before and after transformations on Facebook, revealed good old fashioned bleach did the trick!

Maria said: ‘I literally just squirted a small amount of bleach in and rubbed it with an old toothbrush. I did then squirt a bit more and left it overnight. 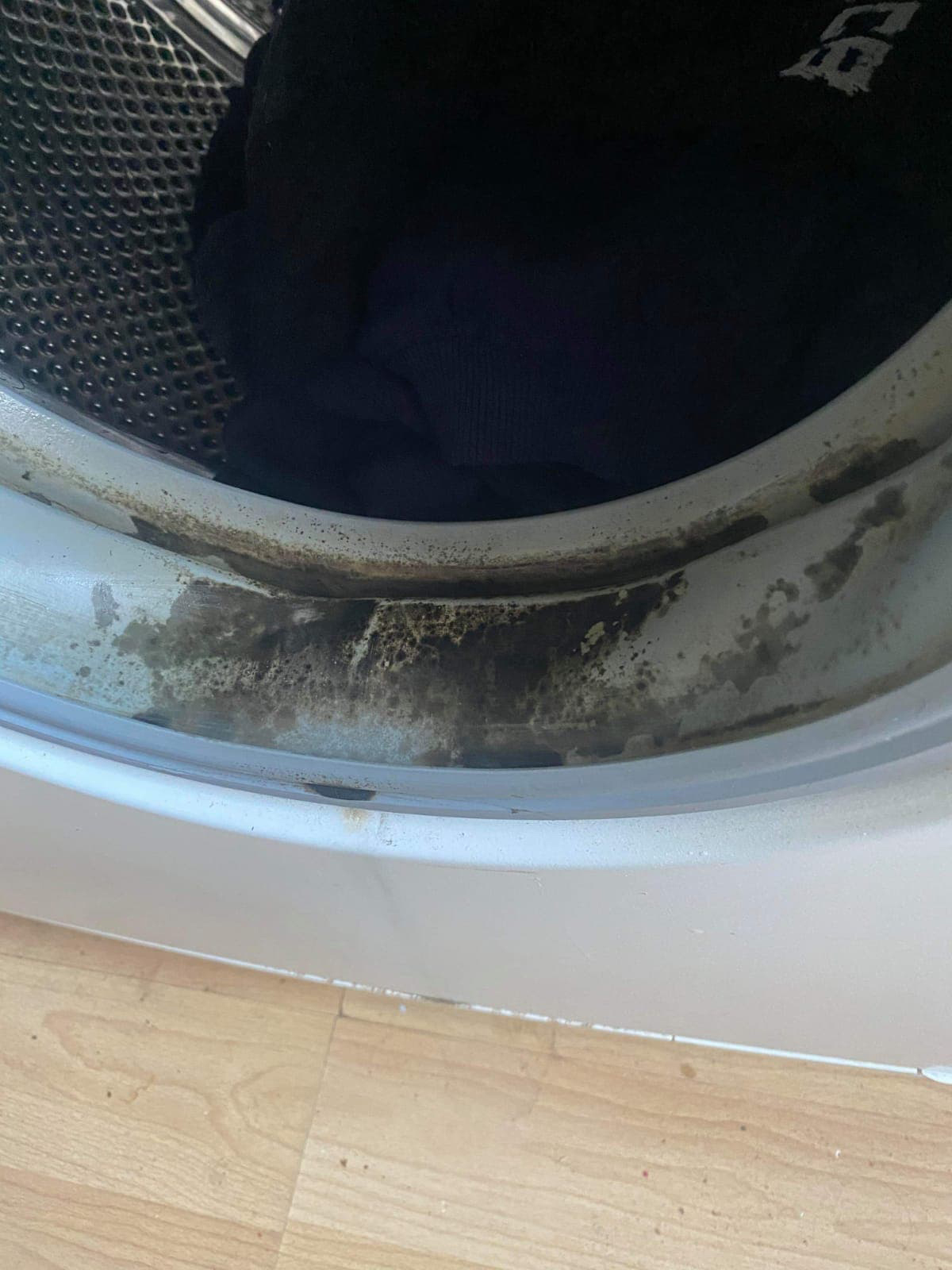 "I told my sister, she did her washing machine too and she was so happy!

"I saw some comments about it ruining the rubber but I used about two egg cups in total, not enough to ruin it.

"It really works on black mould, it’s great. The first pic is in the lady's house (who I bought it from) and the other two are at mine if people wonder why the floor is different!" 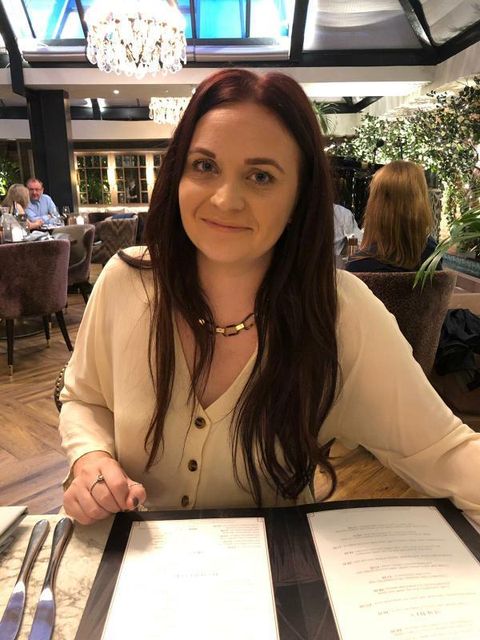 Another cleaning-obsessed mum, Kirsty Chapman, said she swears by the 2p hack to get her cleaning done around the house.

The support worker, 31, from West Yorkshire, said the hack is ‘quick and easy’ – and it doesn’t cost any additional money.

Kirsty, who has a six-year-old daughter, shares her budget cleaning hacks on her Instagram, and admitted no other products have worked as good as her 2p trick.

She said: "I find this hack removes limescale from taps best for me. I have used various cleaning products in the past and nothing has worked as good as the 2p trick! 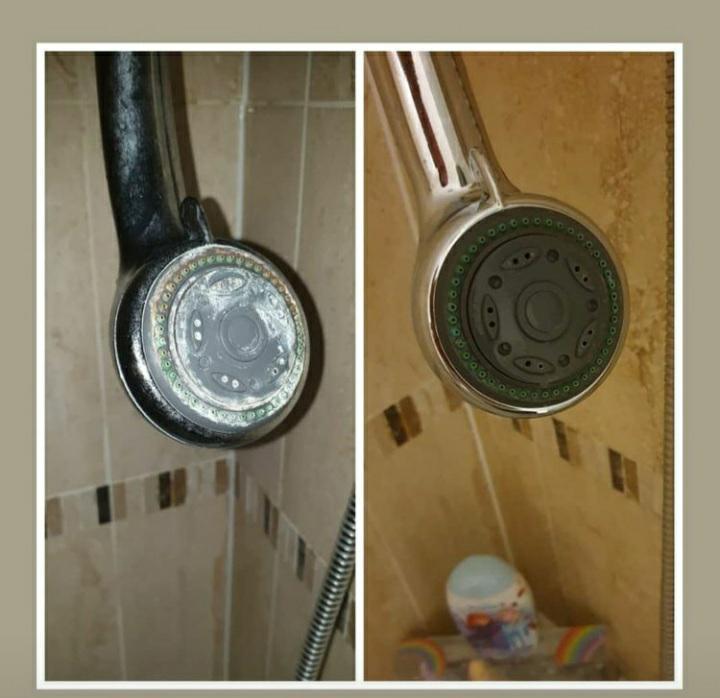 "Simply wet the 2p with some water and then scrape away at the limescale with the 2p.

"I normally just use my hycolin bathroom cleaner which is exclusive to Aldi after with water and a sponge to remove all the excess and to finish it off.’

Cleaning influencer Sam said she thinks the best product for cleaning that costs under £1 is white vinegar. 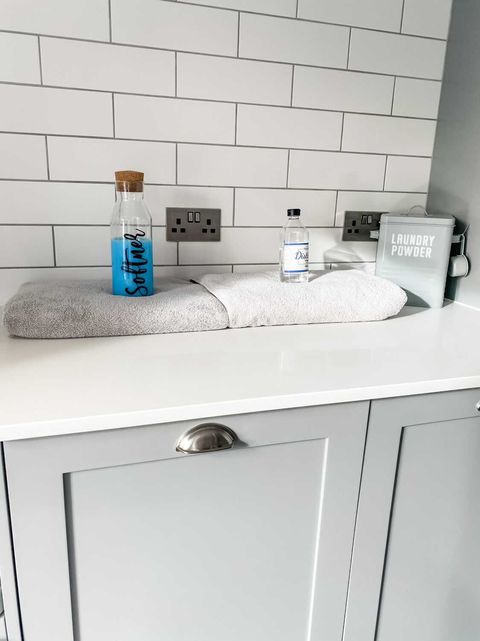 The mum-of-three said the household item has many uses – but her favourite budget hack is to use white vinegar instead of fabric softener, especially when washing towels.

Sharing her before and after cleaning results online, Sam said: "I washed the slightly greyer towel using washing powder and fabric softener.

"The one that was washed with vinegar is fluffier – you can even see that it’s slightly higher – and it's also not as rough to touch!"

Meanwhile mum-of-one Stephanie Bowers, from Leicester, said cleaning is her ‘stress relief’ and she loves the smell of a fresh bathroom.

Loving nothing more than to give the house a ‘good scrub’ while listening to music and having a singalong, Stephanie, 22, is always coming up with budget cleaning hacks.

The part-time insurance manager is also one of many ‘cleanfluencers’ – who has built her social following by sharing her cleaning tips online. 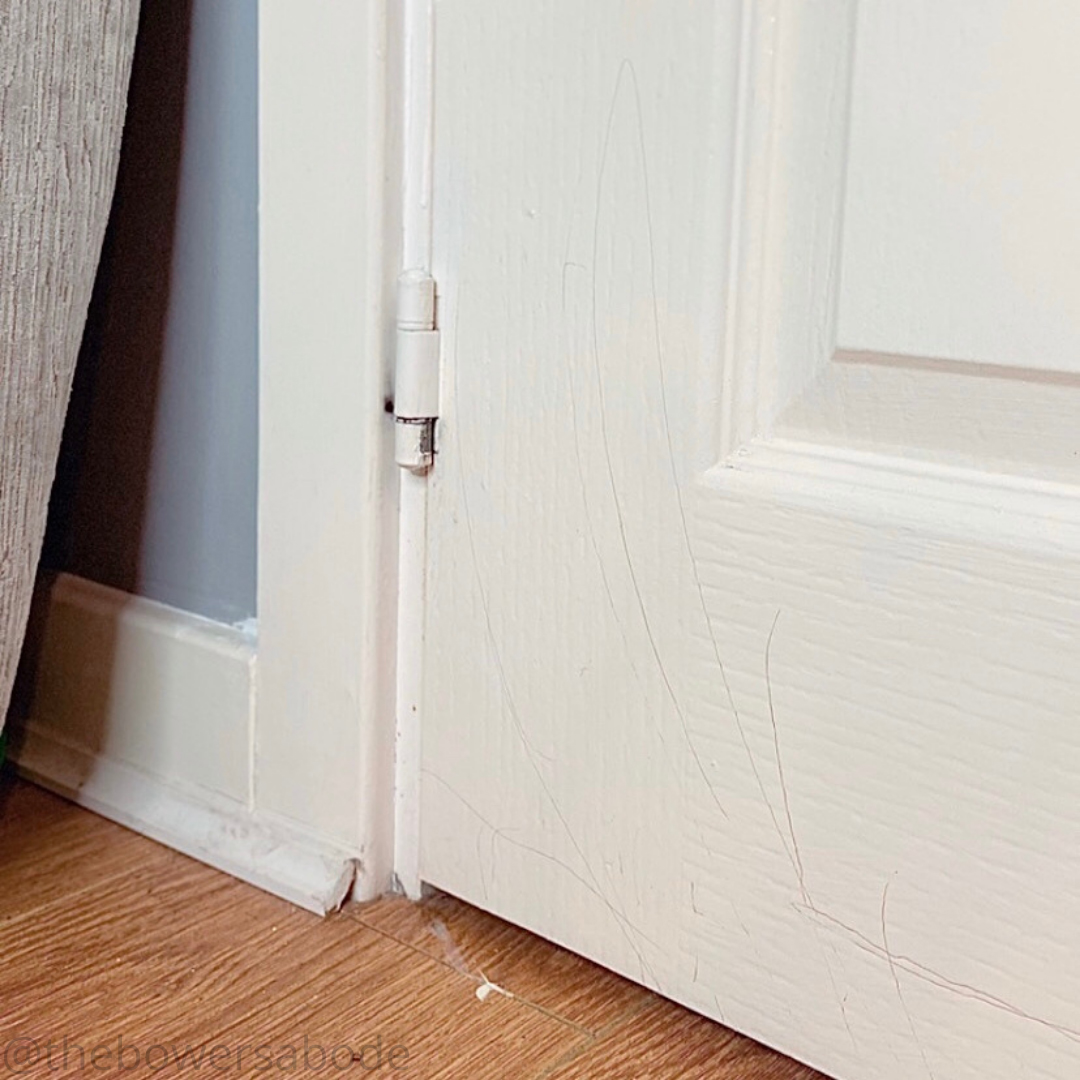 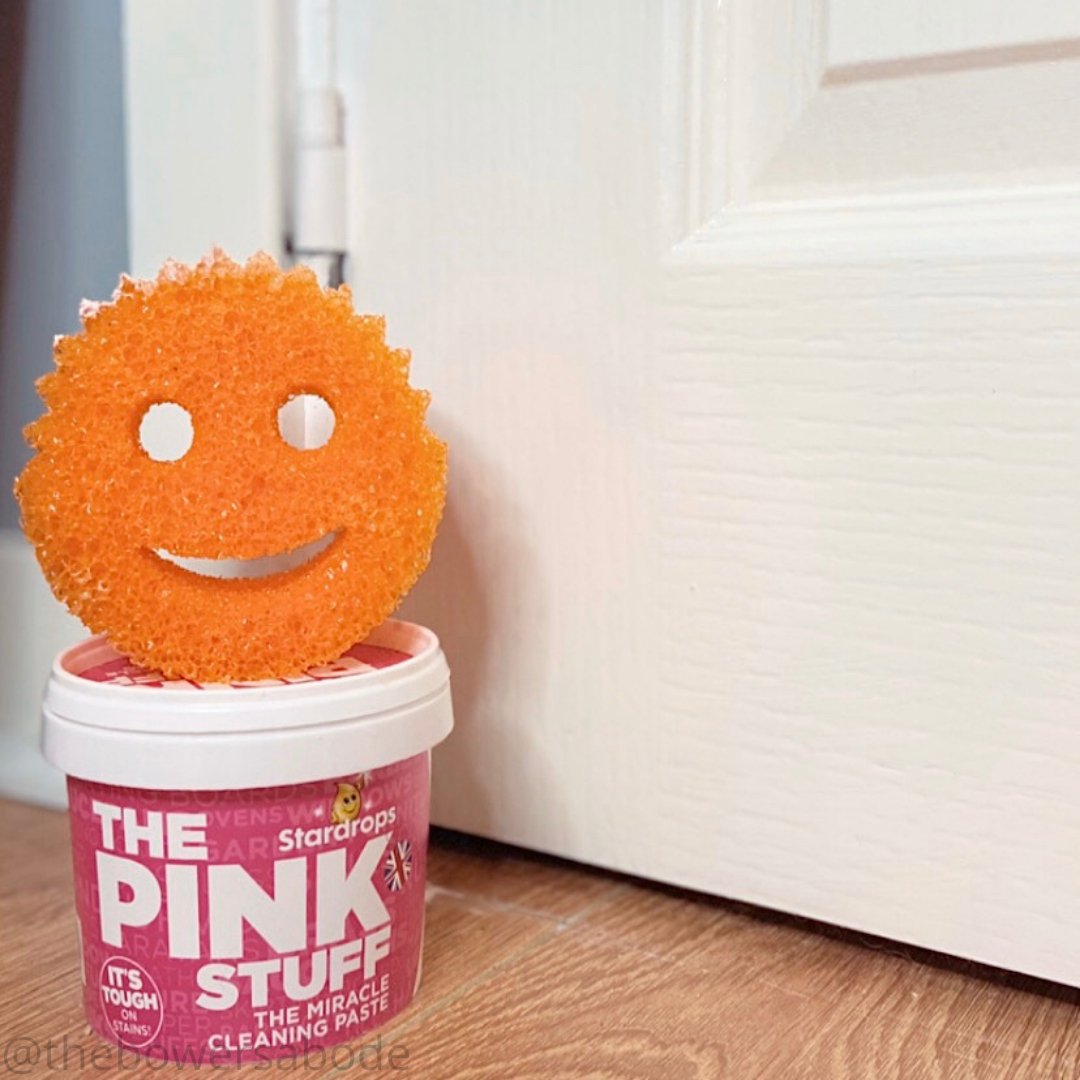 Stephanie said: "Cleaning is my stress relief. You can’t beat the satisfaction of hoover lines once it’s all done!

"Having an inquisitive growing toddler means there is going to be trouble and the latest fascination is with pens.

"The Pink Stuff – which you can pick up for cheap –  has become my saving grace as everything has to be drawn on especially the doors.

"It’s super quick, very easy and it allows me to restore the walls, doors and pvc without a mark being left!" 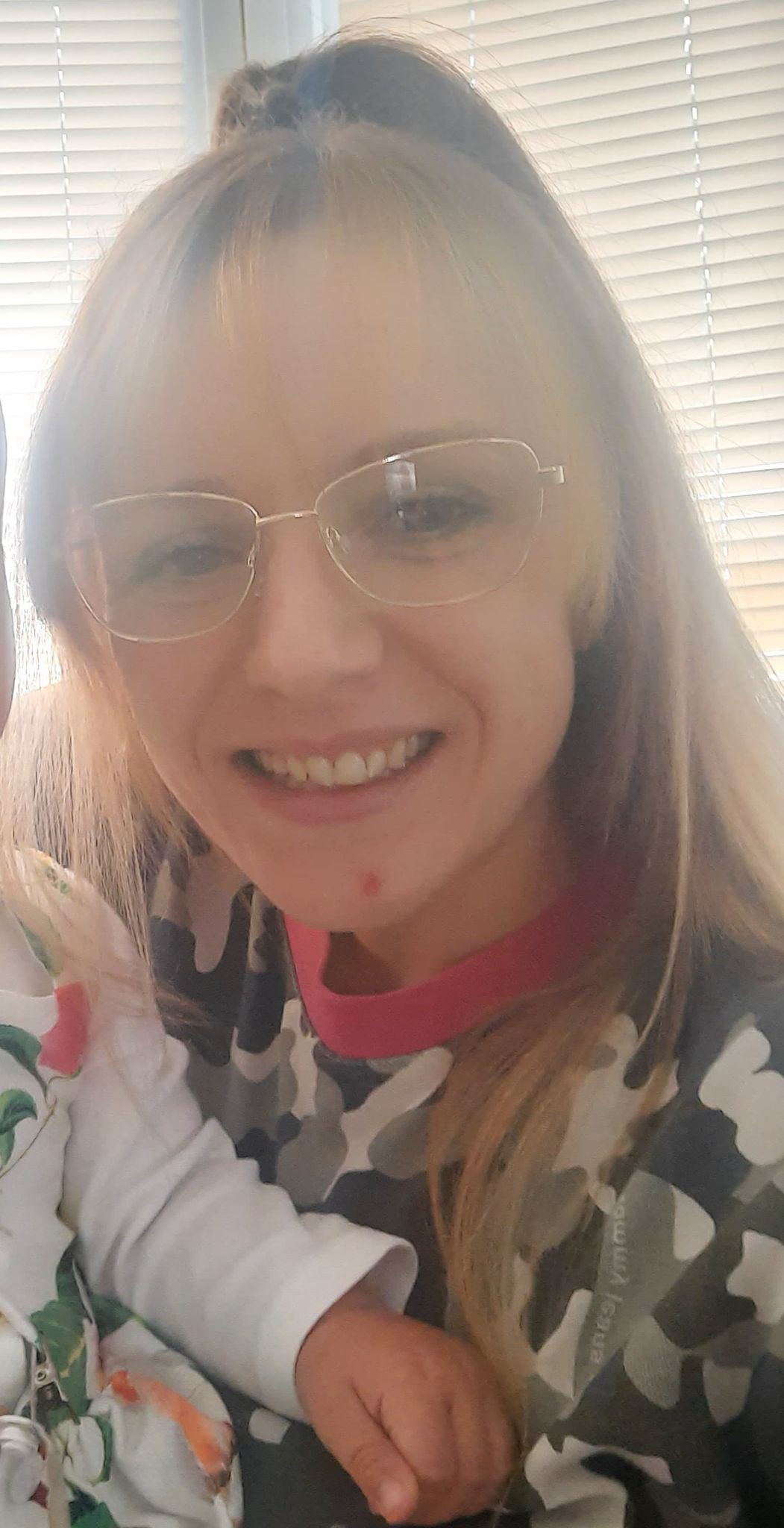 And Jessica Baker, 29, from Canvey Island said she loves using regular household items – on a budget – to keep her home looking spick and span.

The hairdresser said she often uses baking soda and distilled malt vinegar as a cheap hack.

She recently came up with a cheap way of cleaning her hob which had become marked with grease and dirt.

She said: "I sprinkled baking soda on the hob and sprayed distilled malt vinegar and let it sit for half an hour. 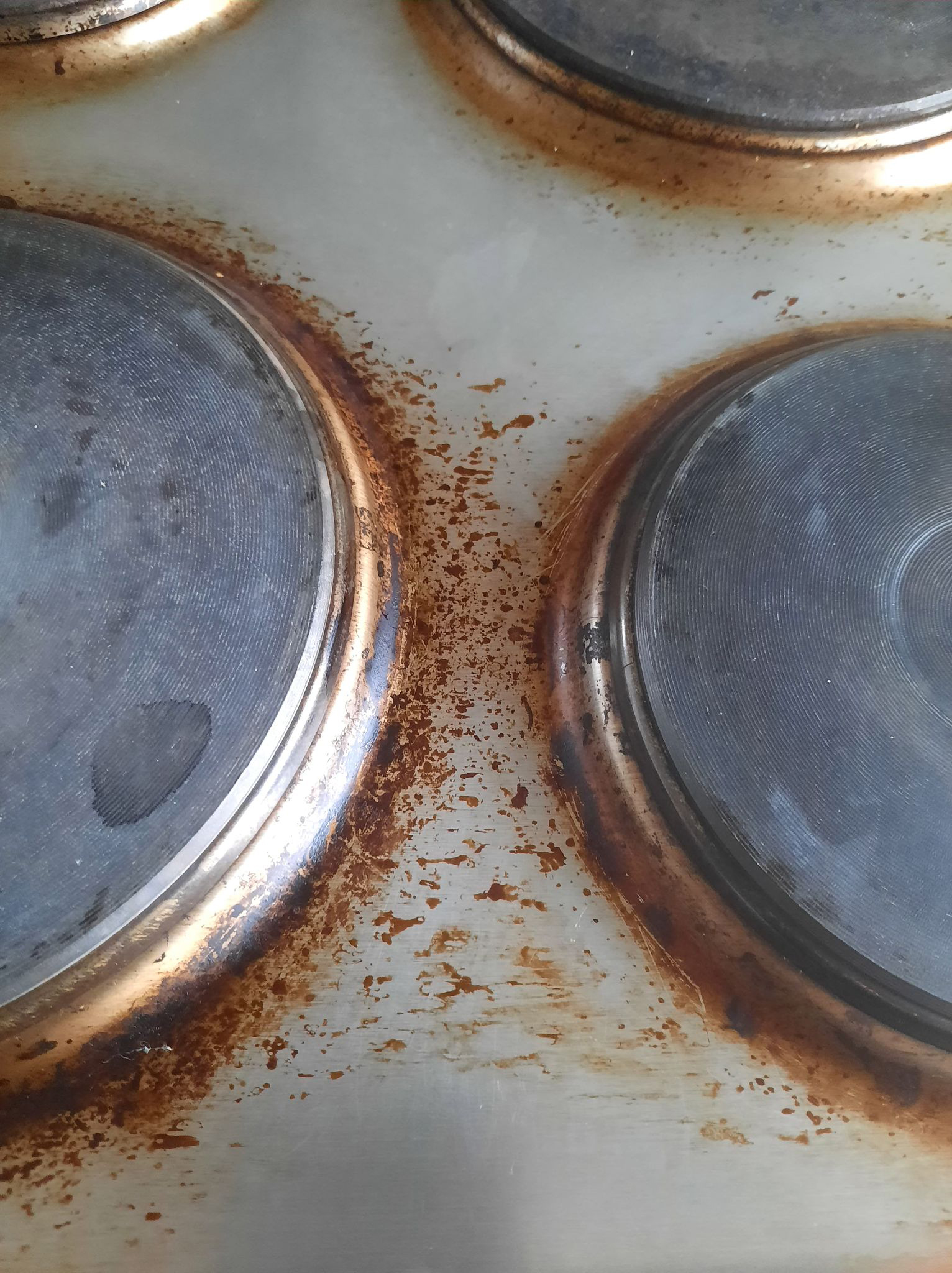 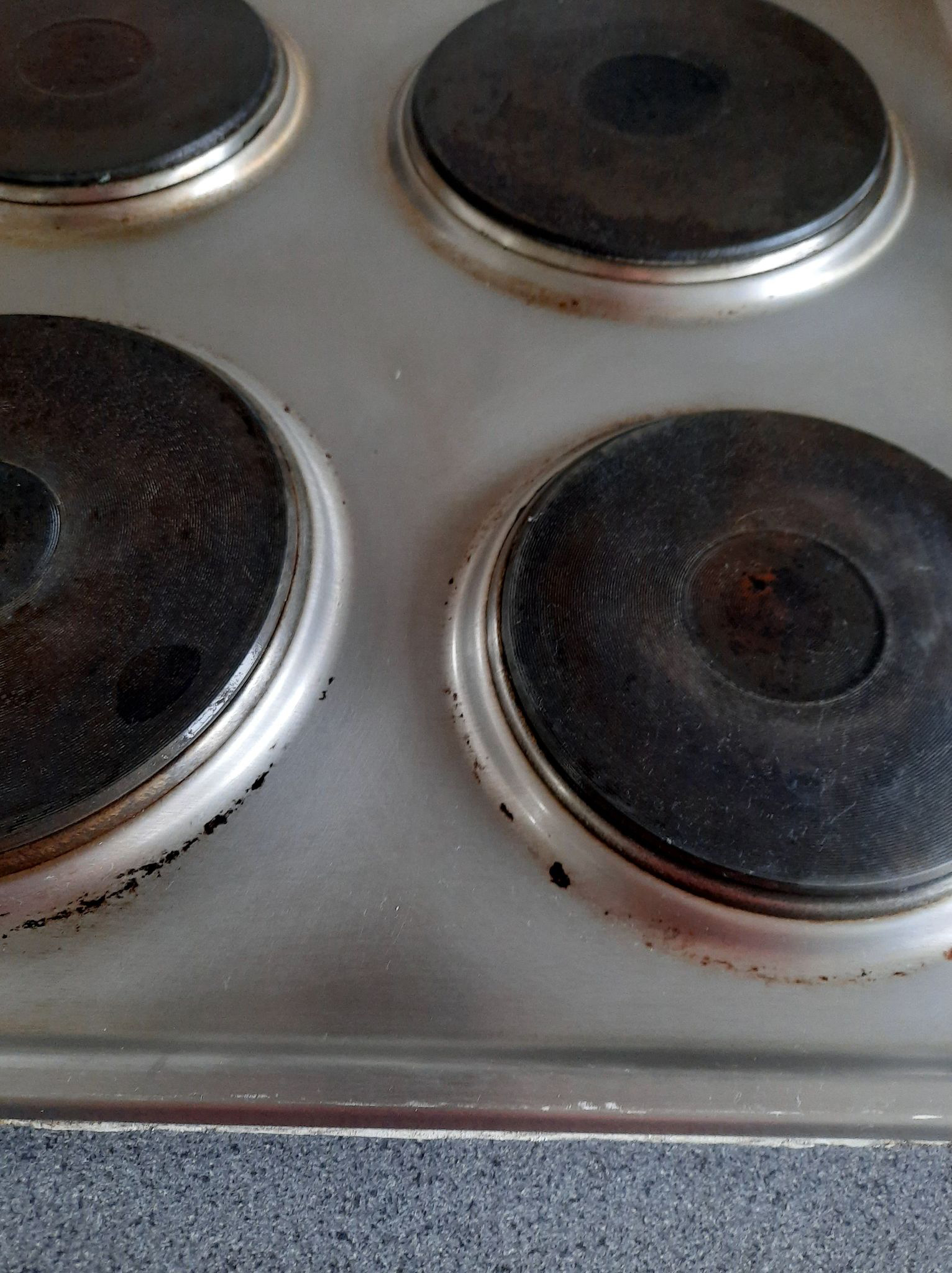 "Then using a scourer and good old fashioned elbow grease, I scrubbed the cooker and the stains were slowly lifting.

"Then I finished it off with the Pink Stuff paste and again, using a scourer I scrubbed – this got rid of 90% of the dirt and grease.

"I already had the baking soda and vinegar at home so that didn't cost a penny and a tub of the Pink Stuff paste was £1 – what a bargain!’"

And this headteacher tells parents to ‘do a teacher training course’ in scathing letter after they moaned about home lessons.

Plus this mum who lost her toddler in a supermarket shares the tip she used for finding him – and EVERY parent needs to know it.

While this mum was ‘told off’ for putting her two kids in a supermarket trolley by stranger claiming it’s ‘illegal’.