WITH temperatures plummeting, there's nothing quite like warming up with a Christmas-themed coffee.

However, shocking new research has revealed that these festive drinks from coffee shops are crammed with up to three times more sugar than a can of full-fat coke. 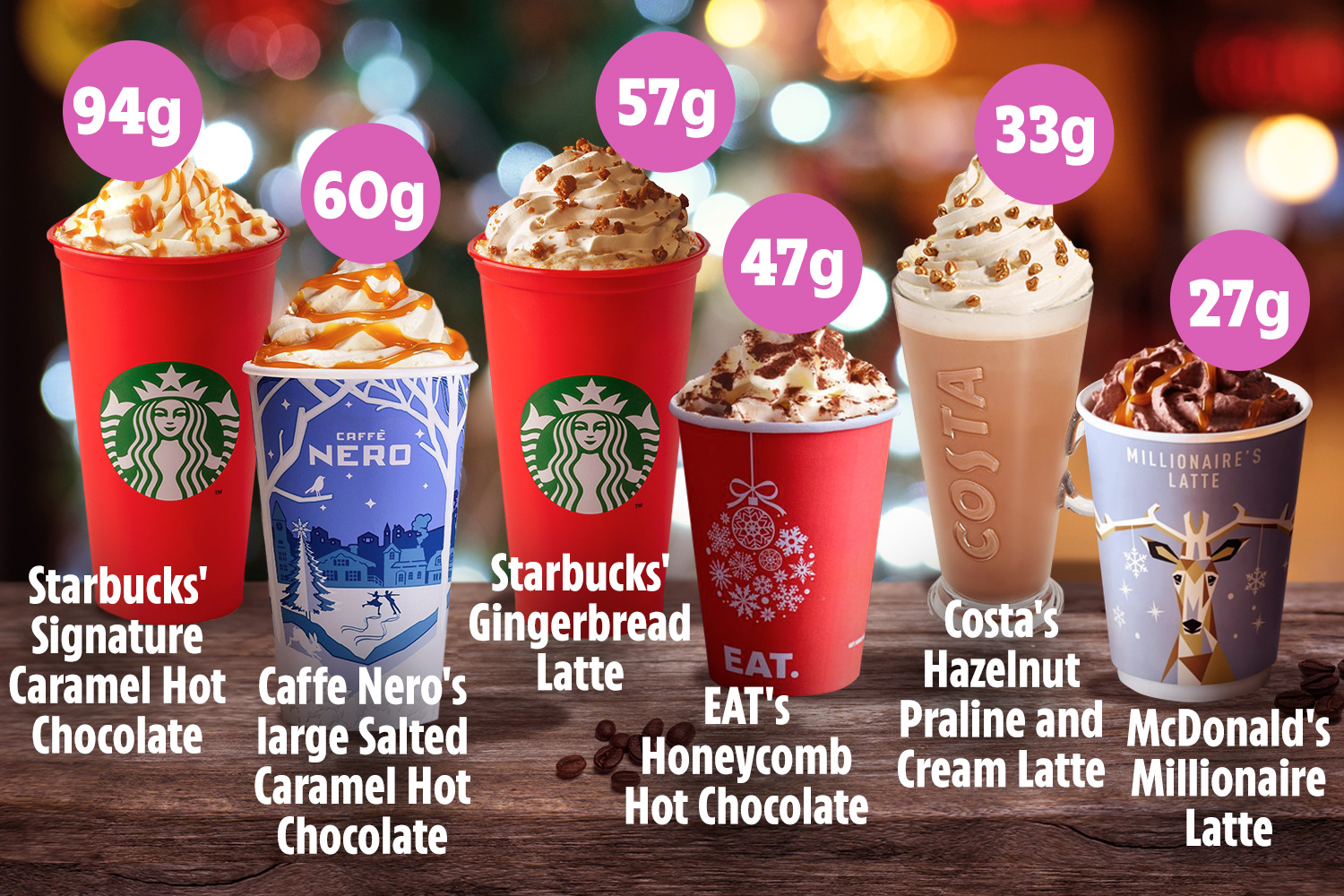 And they contain nearly three times the amount of calories as in a McDonald's cheeseburger.

It comes following a new study which investigated the sugar and calorie content of 203 hot drinks on Christmas menus of chains including Starbucks, Costa and Pret.

And researchers from Action on Sugar, based at Queen Mary University of London, have now called on the Government to extend its soft drink sugar tax to caffeinated hot ones.

The worst offender was Starbucks' Signature Caramel with one large mug serving up to 758 calories – over 100 calories more than one of KFC's six piece Bargain Buckets.

It is also packed with 93.7g of sugar – three times an adult's entire daily allowance and four times the amount of sugar than in a Mars Bar, which has 20.8g of sugar.

It also contains 503 calories – nearly the same as a McDonald's Big Mac which has 540 calories.

A Starbuck's Gingerbread Latte is not much better – serving up 523 calories and 56.6g of sugar in a large cup.

This is not to say you can't enjoy a festive drink every now and then – especially at Christmas – just make sure you're not having these regularly.

Maybe opt for a lower calorie version of these beverages – like Pret's Soya Pumpkin Spice Latte.

While it's still not the healthiest thing you could be drinking, it has 6g of sugar and 162 calories.

It is one of the only drinks analysed in the research that would not receive a red traffic light for total sugars totalling more than 13.5g.

Despite Government clampdowns on sugary drinks in the past few years, more than 27 per cent of the drinks seen their sugar content increase since 2016.

Three years ago, a standard hot chocolate from Greggs contained 33g of sugar – but it is now crammed with 42g.

A Vanilla Latte from KFC has 26g of sugar now, compared with 19g three years ago – nearly two teaspoons more.

And Caffe Nero's White Chocolate Mocha is filled with 30.1g of sugar despite containing 24.5g in 2016.

The ten most sugary festive drinks

Graham MacGregor, professor of cardiovascular medicine at Queen Mary University of London, said: "It's vital that whichever government is in power next week fully commits to the target to halve childhood obesity by 2030.

"This will mean giving full control to PHE to deliver a robust prevention programme and the authority to ensure that a largely irresponsible food industry fully complies – and that must include taxing these sugary milk-based drinks in the same way as soft drinks."

Registered nutritionist Holly Gabriel, from Action on Sugar, added: "It is shocking that so many high street coffee chains are wilfully putting their customers' health at risk despite PHE setting sugar reduction targets for sugary milk drinks in 2018.

"Coffee shops and cafes need to take much greater steps to reduce the levels of sugar and portion sizes, promote lower sugar alternatives and stop pushing indulgent extras at the till."

He said: "Every day, at least 100 children are in UK hospitals having rotten teeth pulled out because of decay caused by sugary food and drinks that is entirely preventable.

"It is high time coffee shops and cafes act more responsibly and that means reducing the sugar and portion sizes across their drinks menu and stop putting profits before the health of our nation which is feeding the UK's obesity, type 2 diabetes and tooth decay crisis."