A SAVVY DIY couple finally have the patio of their dreams with outdoor seating, a barbecue and even an outdoor movie screen.

Carly Walley and her partner Peter were able to decorate the space on a budget too using bargains from Dunelm and B&M – and are pretty chuffed with the result. 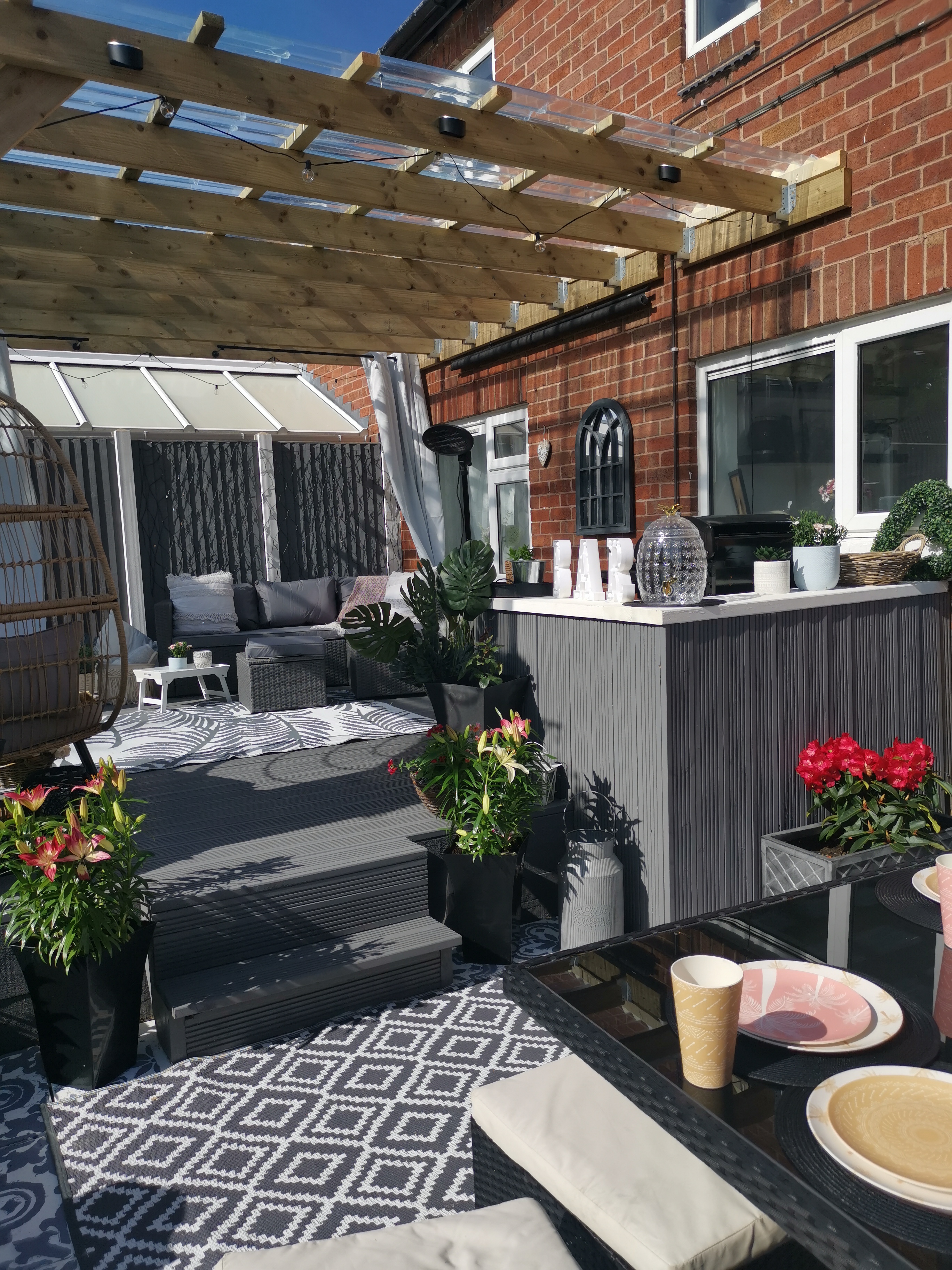 When the couple first moved into the home the decking looked "absolutely awful" and was in desperate need of some sprucing up.

Carly, 32, from Nantwich said it had "odd, mis-coloured and mis-matched slabs" and the whole garden area needed some love.

Now, Carly and Peter are "obsessed" with their new outdoor space and can't wait to make use of it in summer.

Carly told money-saving community LatestDeals.co.uk: "When we first moved in, this area of the garden was a horrible patch with just soil. Although we added stones it didn’t look right so we decked over it last year, and now we’ve gotten around to finishing it. 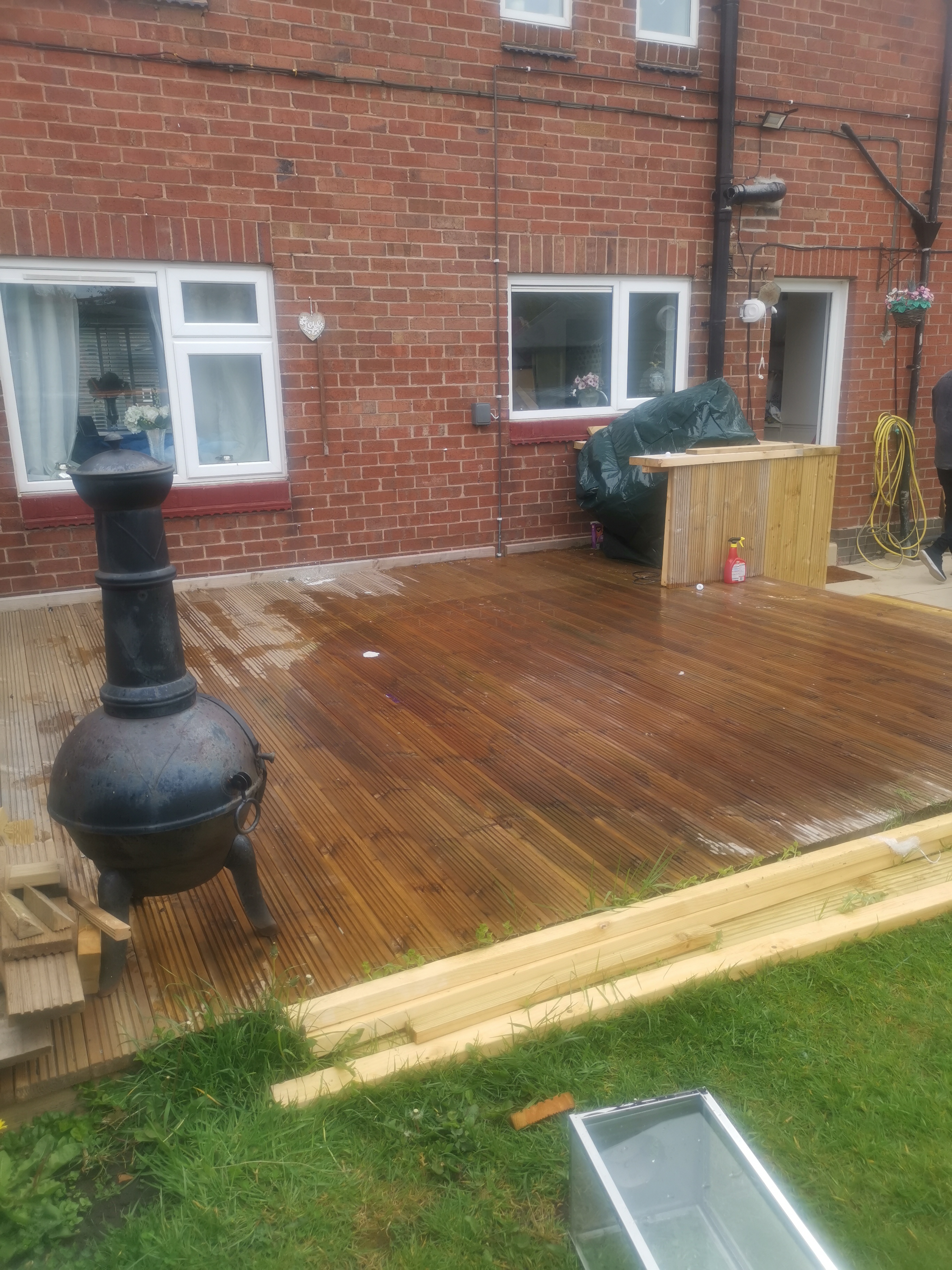 "As well as deciding to finish the space with a pergola and barbecue area, we also wanted to work on the patio.

"When we moved in, it was made up of awful, odd, mis-coloured and mis-matched slabs. We had painted it a block colour as a temporary fix, but I was never happy with it. Now we’ve totally transformed the area without the huge cost to go with it."

"I wanted the outside to be as decorated as the inside of the house so it looks really welcoming," she said.

"First I picked up two artificial hanging baskets from Dunelm, called white topiary balls, for £12 each. I also got a basket from there for £12 for keeping throws in. 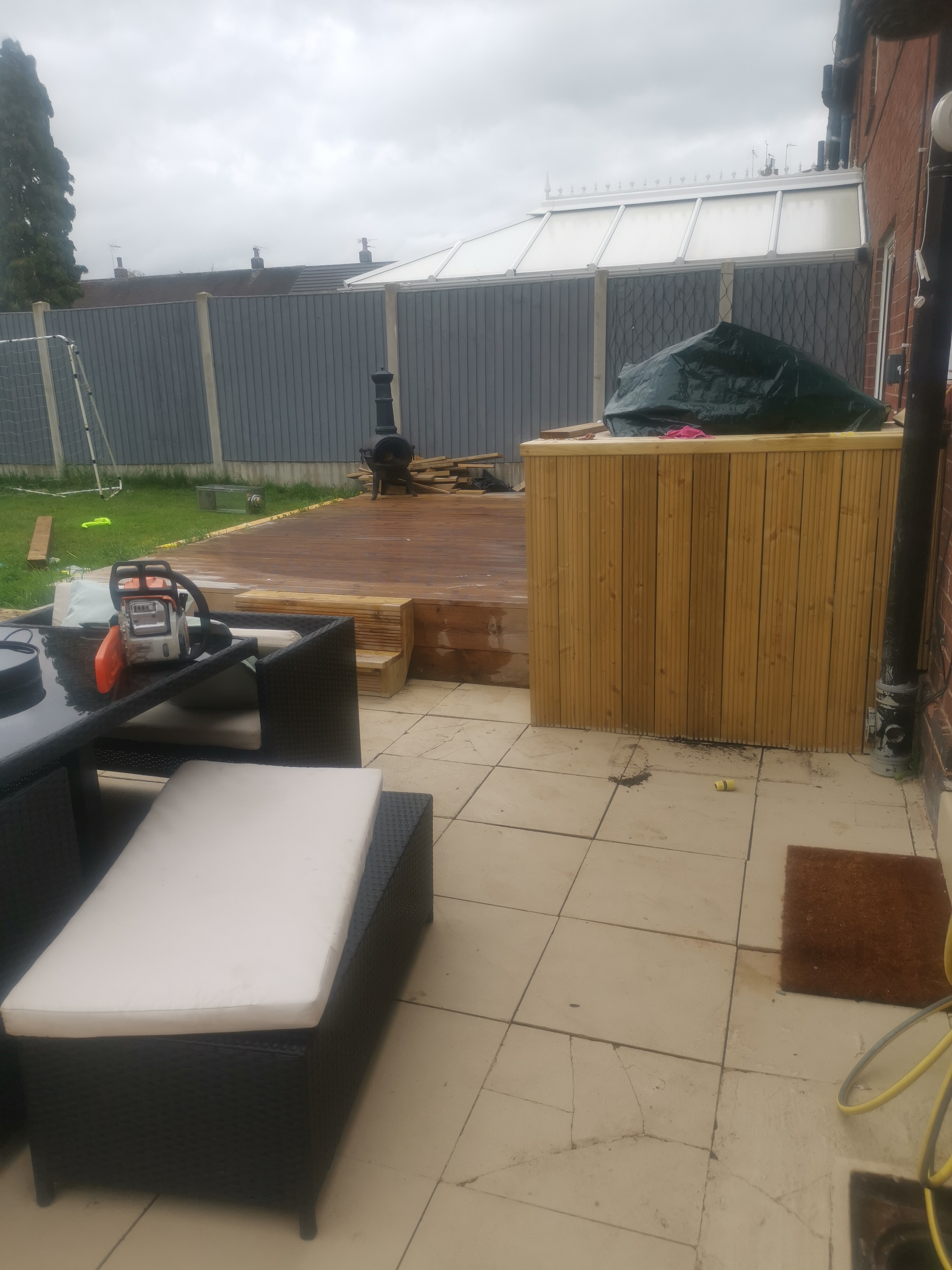 "While I was shopping at Dunelm I also picked up some placemats which were pretty cheap – I wanted something which wouldn’t cost the earth. These were £4.25 for four in black woven fabric, and I got them to go on the outdoor table alongside various items from B&M."

The couple picked up an outdoor dining table from B&Q for £150, which Carly thought was a good deal.

She said: "I don’t think the price is bad considering it is massive. All of the table decor, including the plates, are from B&M. The bowl was £3, the large plate was £4, and the smaller plates were £2 each."

Also from Dunelm were the super cute basket-style plant pots which Carly nabbed for just £10, and she was pretty pleased with how they look on the decking.

Peter was in charge of building the pergola with Carly stepping in to assist, which ended up painting in a shade called Silver Birch from B&M.

"When we painted the decking area the patio didn’t look right, so I painted it white with masonry paint we already had and got a stencil off Amazon for £15 simply by typing in ‘patio slab stencils’. I then used our grey paint to cover it.

"It’s not perfect as I’m not too precious about it, but I do think it makes such a difference. Peter wanted to put a new one down, but with the cost I suggested we see if we can make these look a little better first, so I’m so pleased we did that."

The handy Peter also built some planters to go around the pergola, in addition to a projector, rattan seating area, a small white table and baskets with additional cushions and throws.

There's even a stunning egg chair to relax in.

"The chair came from Studio and I used Top Cashback to get money back just for buying it. We saw one in B&Q that was around £400 but then this one was available with (in my opinion) much nicer cushions for £100 less," Carly said.

"I was really struggling to get any garden furniture but I managed to grab this one from Argos.

"It’s called the Mini Corner Sofa and costs £300. It took a little while to be delivered but it turned up in the end, and it comes with a little storage stool. As for the rug next to this sofa, it was a bargain from Aldi for around £18. "

The barbecue is grey and white, with various small planters, baskets and wreaths adorning it.

"Initially the barbecue space was going to be a bar, hence the BAR sign which a friend gave to us," Carly said. 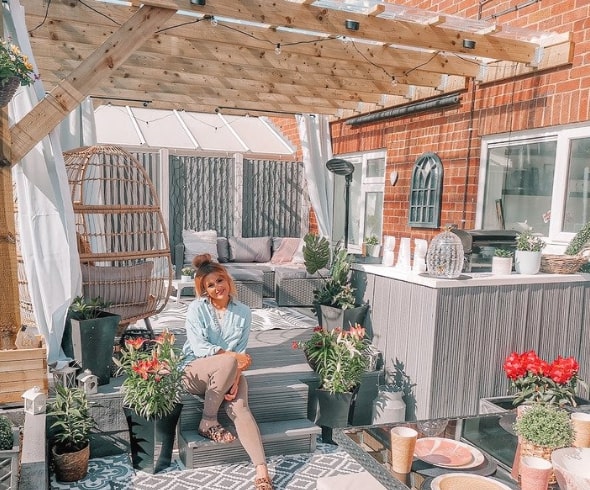 "However, now it’s where we will have cookouts, and pretty much all of the decor around this area is from Home Bargains for £3 or £4 each, except the drink dispenser which is from B&M for £10.

"I also got two lavender planters from B&M for £15 each, and a number of small ones for £4 each."

Carly picked up some additional bargains to complete the look including a wall mirror from Home Bargains for £5.99

"I hung up three sets of white curtains from Amazon for £7.50 each which I love. Then I got some string lights off Amazon for £20 which look gorgeous at nighttime," she explained.

"One of the lanterns we got was a bargain from B&M. It was slightly marked so Peter got some money off it – always worth asking! We also got a patio heater from Amazon which wasn’t crazy expensive at £100 and had really good reviews."

Now the garden is complete, Carly and Peter couldn’t be happier.

"I’m obsessed with the decking, I love it so much. We weren’t sure about putting a roof on top but I’m so glad we did as it’s a much more usable space now and we can sit out in the evenings, reading or watching films with the projector."

"They undoubtedly saved a lot of money building the pergola themselves and creating the stencil pattern on the patio instead of replacing it. Now the pair can enjoy summer nights outside in their stylish new space!"

For more home DIY stories, this woman gave her ‘boring’ kitchen a multicoloured makeover but people think she’ll never be able to sell her home.

Plus, this thrifty couple turn their rotten decking into a dream pergola and it’s all thanks to £3.99 eBay bargains.