ATHENS, Greece — Maria Grazia Chiuri, who has made feminism the guiding theme of her tenure at Dior, could scarcely have picked a better location for her cruise collection than Greece, a country whose mythology spawned a battalion of powerful female deities, from Athena to Nemesis.

The goddess gown is to the Italian designer what the Bar jacket was to Christian Dior. A staple of her collections, it embodies not just the feminine divine, but also a certain notion of freedom — its loosely draped, pleated folds the antithesis of the corseted rigor imposed by Dior’s architectural designs in the 1950s.

This season, Chiuri is propelling the peplos — the robe traditionally worn by women in ancient Greece — into the 21st century by combining classically elegant gowns, seemingly lifted from the caryatid sculptures on the Acropolis, with athleisure staples and futuristic sneakers: Nike the goddess meets Nike the sportswear maker, so to speak.

“It gives this idea that they are not statues, but are active in the world,” she explained during a preview in Paris. “It’s really something absolutely contemporary: all the things that are under the dress are technical things that you can use also to run.”

To emphasize her point, Chiuri will show the collection today at the Panathenaic Stadium in Athens in a livestreamed show scheduled to take place at 8.30 p.m. CET, setting the scene for the upcoming Summer Olympics in Tokyo.

“The idea to show inside the stadium was my obsession, because I think it speaks about the relationship that the clothes have with the body — a body that is a performing body,” Chiuri said of the venue, which hosted the opening and closing ceremonies of the first modern Olympics in 1896.

“The peplos also is an element that allows the body to move freely, that evokes women in movement, and no one more than an athlete moves their body in a really active way. So my idea was to culminate all these elements inside the show,” she added. 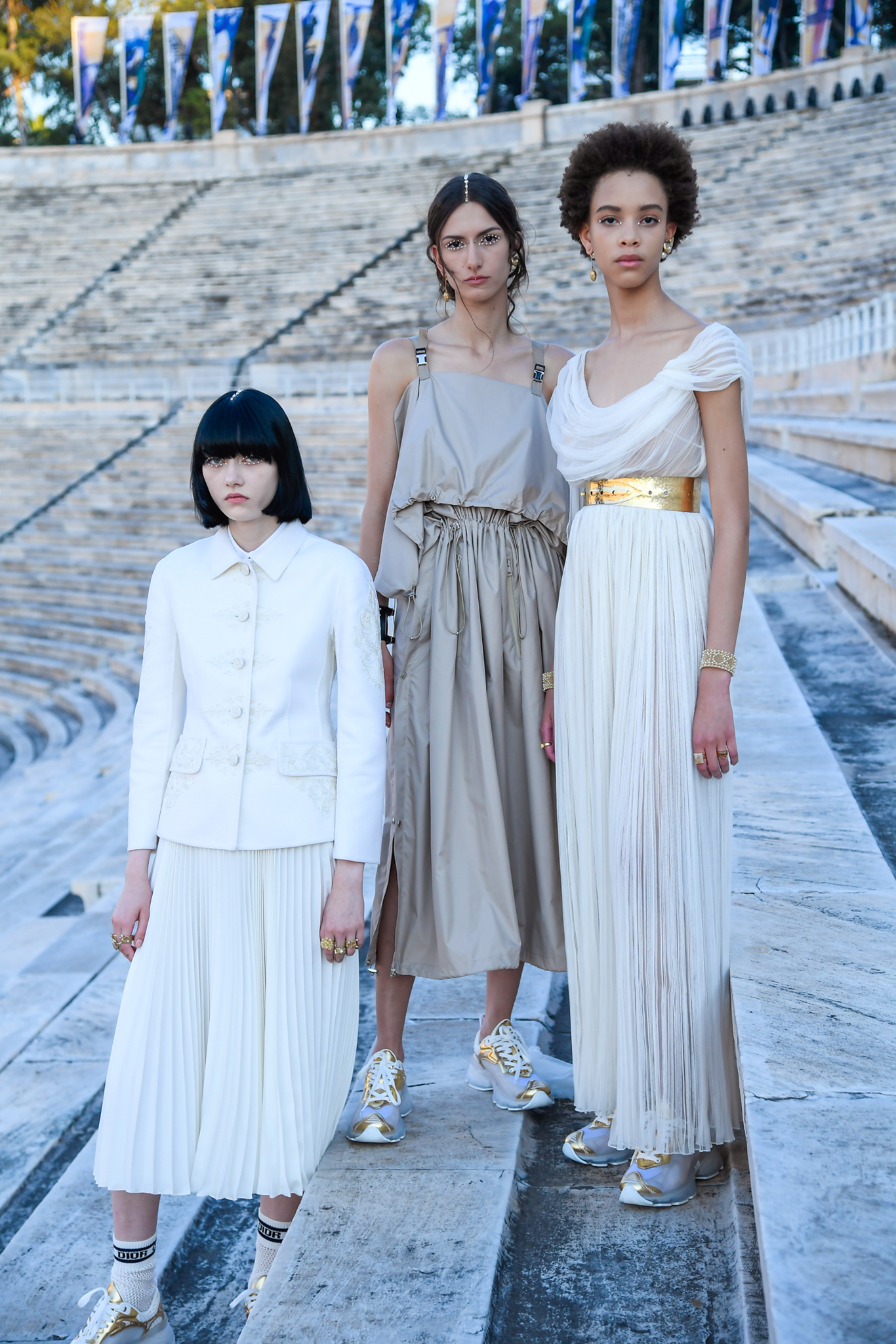 Stripping the gowns of their eveningwear connotations, she imagined a wardrobe for a goddess on the go. Chiuri draped panels of pleated white jersey over a flesh-colored bodysuit dotted with pearls; layered a diaphanous pleated dress over a hooded bodysuit, and paired a white vest with a loose neckline with waterproof track pants.

Her personal favorite is a toga-like black recycled nylon dress with adjustable drawstrings. “I want it for myself: I think it’s super functional, super cool,” she enthused.

The designer has tried her share of sports in the past. (A few years ago, she even took a trapeze lesson with her then-design partner, Pierpaolo Piccioli.) These days, the 57-year-old practices Pilates and yoga at home. “Because of my age, now I have to be safe, also because I broke my femur two years ago,” she said apologetically.

Still, she’ll be watching the Summer Olympics — assuming the event, postponed by 12 months due to the coronavirus pandemic, goes ahead despite public opposition. “My husband is super obsessed with all kinds of sport. He’s a completely typical Italian man, so we see everything,” she said. “I really like the high jump. I think it’s beautiful.”

Anyone inspired to join a gym will find a full array of workout gear at Dior, such as leggings, boxing shorts and running bras in patterns designed by artist Pietro Ruffo, including an Aegean blue motif inspired by the bodies of athletes painted on antique Greek vases. 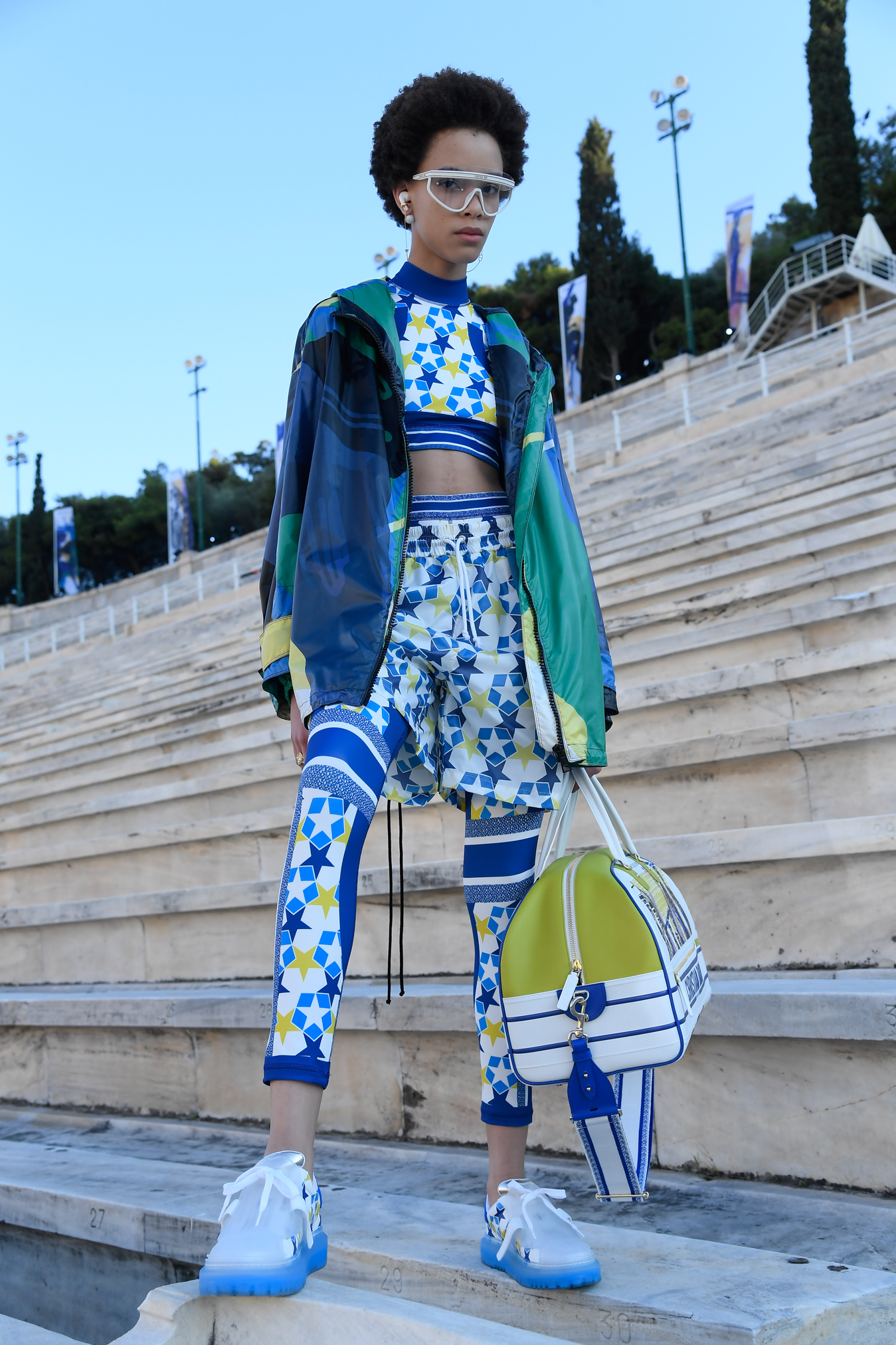 In an echo of her debut collection for the house in 2016, Chiuri included mesh or embroidered fencing vests that she likened to the shield of Athena, the goddess of war. “These corsets protect your solar plexus,” she said. “It’s also my idea to translate a reference like the Dior corset in a contemporary way.”

The starting point for the collection was a vintage fashion shoot featuring models in gowns from Christian Dior’s fall 1951 haute couture collection in front of the Acropolis. The brand is also using the event to showcase the creativity of local artists and artisans, as it has done with other destination resort shows in Lecce, Italy, and Marrakech, Morocco.

Chiuri tapped Aris Tzernovakis, a tailor and embroiderer based near Argos in southern Greece, to embroider a classic Bar jacket and her signature Book tote bag, and artist Christiana Soulou to make drawings of female figures from mythology that appear in the folds of dresses.

Pulling out a copy of “Goddesses: Mysteries of the Feminine Divine” by Joseph Campbell, she said preparing the collection had inspired her to revisit her history classes.

“It was beautiful to have the opportunity to rethink and to see these references that probably, when I studied them at school, I didn’t read and learn about with the same interest and consciousness that I have today. That’s touching me a lot,” she mused.

Chiuri sees a direct link between figures like Arachne, who challenged Athena to a weaving contest, and clothing. “Craftsmanship, especially the loom, is really the first human activity,” she noted. “It’s like a thread that goes around the word, that speaks about our humanity.” 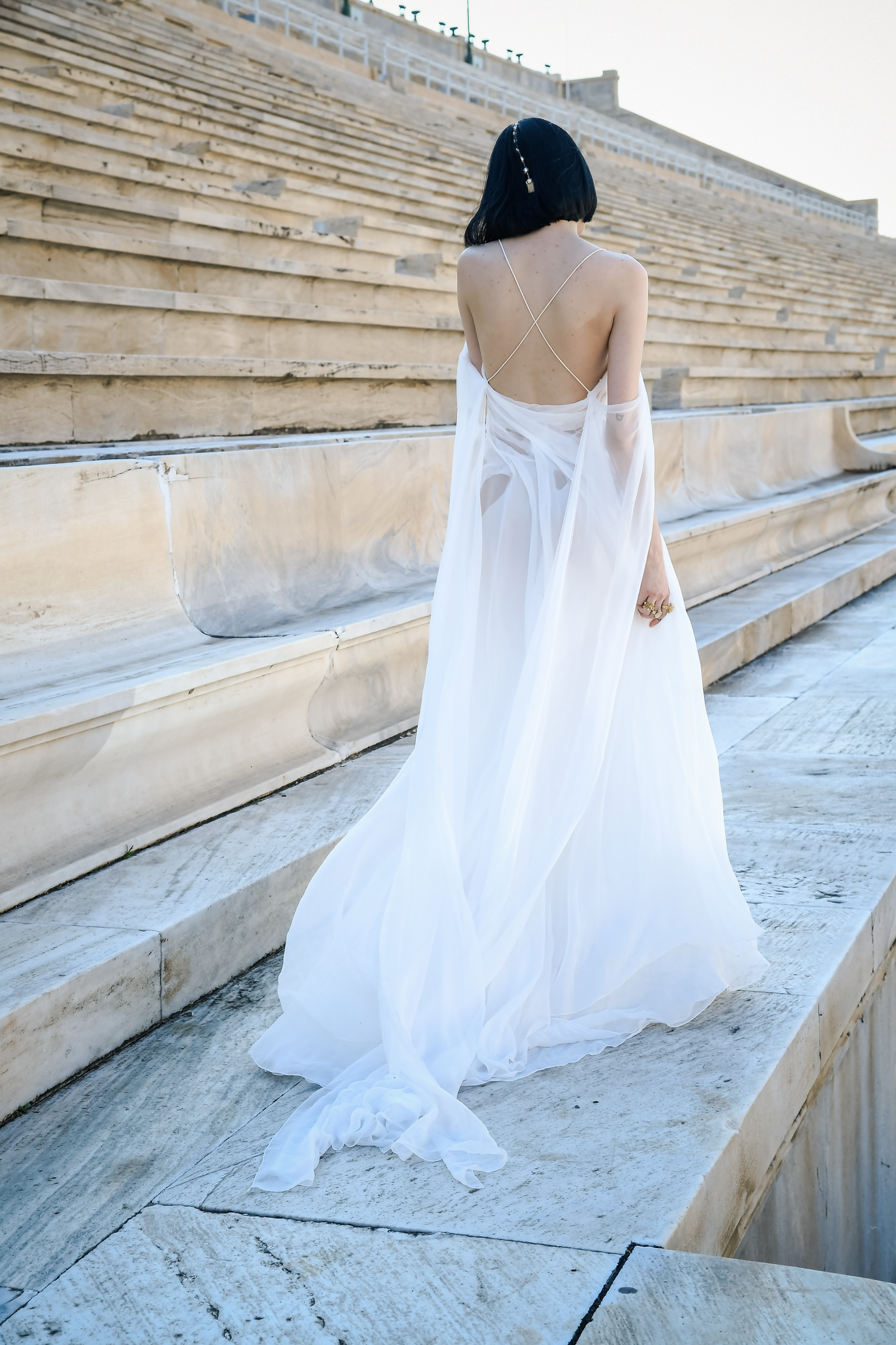 The designer has often spoken about the importance of preserving this ancient know-how, or risk losing it forever — a mission she has combined with a pragmatic approach to dressing women.

She’s certainly not the first to pair evening gowns with sneakers, but coming from a house like Dior, it was the clearest acknowledgment yet of sportswear’s takeover of high fashion — and of the consumer’s relentless appetite for activewear following a year of successive lockdowns.

Grimacing at the idea of wearing high heels, Chiuri pointed at the brand’s new Dior Vibe sneakers, featuring a transparent upper with gold or silver accents. “We are doing fashion for now, not for the past and not for the future, but about now. After the pandemic — though we’re not completely out of it yet — we want to move,” she said.

Dior Teams Up With Sacai on First Co-branded Collection