In his nationally televised “Checkers” speech of 1952, Richard Nixon, a vice-presidential candidate at the time, aggressively hoisted his Everyman flag. “Pat doesn’t have a mink coat,” he famously said of his wife, “but she does have a respectable Republican cloth coat.”

An emblem of modesty in the day, that old-school cloth coat has passed through many iterations in the intervening decades. But neither Nixon nor his audience could have foreseen its wholesale appropriation by a rival party.

Flash forward to the 2021 presidential inauguration, where we find this formerly low-key item paraded in a pastry assortment of colors on the ad hoc runway that was the National Mall. The panoply, flaunted with a kind of overstated understatement, included Jill Biden’s vibrant blue tweed, Nancy Pelosi’s turquoise topper, Michelle Obama’s claret tone maxi and Amanda Gorman’s caution yellow Prada, each sending a signal that the cloth coat has been tweaked and remastered for a new generation. 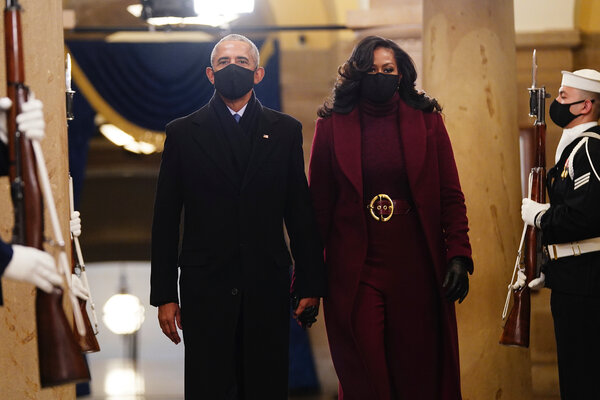 Written off not all that long ago as a relic of Cheever country, it has survived to become, depending whom you ask, a cloak, a shield, a cinematic statement and, most improbably, a colorful hit in an otherwise dreary pandemic year.

Softened-up versions in wool, cashmere and tweed have migrated from now defunct coat departments and are these days seeded throughout stores. “They are merchandised as ‘It’ items,” said Sharon Graubard, the founder and creative director of MintModa, a fashion forecasting firm.

Streamlined alternatives to the blimpy puffer, they are a retort as well, Ms. Graubard said, to “too many soft clothes, too many elastic waists. We’re all craving a little structure now.”

“From my perspective cloth coats have always been around,” Ms. Hsu said. “But they are very much part of the now, a strong trend during lockdown.”

Short or long, closefitting or loosely accommodating, they began gaining traction last fall with a boost from “The Undoing.” In that popular HBO thriller, Grace, Nicole Kidman’s character, a Manhattan therapist, saunters around the Upper East Side in a succession of slender jewel-tone wraps that, to viewers, were objects of chatter and lust.

Primly constructed versions, some reminiscent of Courreges and Cardin, impinged on fans’ consciousness via “The Queen’s Gambit,” its chess master heroine turned out for tournaments in pastels and plaid and, memorably, a structured 1960s-era homage in suitably regal ivory.

The concept was further imprinted on the pop imagination by Meghan Markle, Sarah Jessica Parker, Katie Holmes and their highly visible ilk, conferring a degree of cool and relatability on this long-ago totem of dowager chic.

In a year of pandemic-mandated outdoor gatherings, fabric coats are being worn against the chill, sure, but, also, unlike say wearable sleeping bags, as an expression of glamour, conjuring the formality, if not the rigidity, of their predecessors.

Durable and decorous, they have an emphatically nonpartisan history, dating back to Jacqueline Kennedy, trim in her Oleg Cassini A-line coats, Nancy Reagan, intent on impressing in her red Adolfo, and more recently, Melania Trump who flung her man-tailored coats, patterned or plain, over her shoulders, military style.

Ms. Bendet was moved, she said, by styles that “felt like old-world Dior and Chanel.” In the absence of more visible luxury signifiers, supplanted this year by less showy, more leisurely styles, a cloth coat, she said, “is really your opening statement.”

It’s “like a car — the first thing anyone sees when you arrive,” said Tracy Margolies, the chief merchant for Saks Fifth Avenue, where coats by Max Mara, Ganni, Isabel Marant and Burberry are on proud display, along with color-coordinated ensembles like those paraded in Washington. “Those coats makes an impression,” Ms. Margolies said. “That is the point.”

As zealous a believer, Jason Wu introduced playful, inventive fabric coats for fall 2021, including calf-length deep blue and bicolor swing versions, and a neatly belted black satin trench. “I’ve never shown so many coats on the runway,” Mr. Wu said. “But this year it feels like the mood.”

Among those capturing that spirited and youthful mood was Ella Emhoff, the second daughter, a model and knitwear designer who grabbed attention at the inauguration in a jewel-collar closefitting Miu Miu coat worn over a Batsheva dress with its fluttery hem exposed — a gesture unthinkable in her grandmother’s day.

Unlike their grandmothers, who contented themselves with a single coat per season, deep-pocketed shoppers often invest in a wardrobe. “You can wear one coat on top of one another or add a kimono or cape,” said Nicole Fischelis, a fashion consultant and forecaster. “These coats are meant to be layered.”

For fall Ms. Fischelis likes the fusion of wool and denim at Libertine, floral and plaid combinations at Anna Sui, Epperson’s hooded great coat and, at the Row, robelike wraps in cashmere or satin.

Some standouts this year were conceived to compete with the cargo coat, an elongated multipocket update on the popular “shacket,” an easygoing fusion, as the name suggests, of jacket and shirt. Others include classic polos, reefers and swing coats, available at more modest prices from Zara, with its profusion camel tone toppers, calf-length plaids and double-breasted midis, and COS, offering a midi-length overcoat in pale yellow, and a robelike cream colored maxi.

Light as they are, the most buzzed-about styles often are freighted with meaning. The sunny yellow Prada topper worn by Amanda Gorman, the inaugural poet, was widely interpreted as a statement of joy.

Each segment of the Studio 189 indigo patchwork coat and matching cape worn by Rosario Dawson, who attended at the inauguration with her Senator Cory Booker, her boyfriend, was encoded with arcane tribal messages, said Abrima Erwiah, a partner with Ms. Dawson in Studio 189.

Liz Williams, the designer behind Coat Check Chicago, a small Midwestern label, found Nicole Kidman’s s calf-grazing narrow wraps richly suggestive. “I kept thinking that Grace was hiding something due to the cut of those long fitted coats that she wore so close to her body,” Ms. Williams said.

Practically speaking, cloth coats have a widening cross-gender appeal, the kind of fluidity championed at Fear of God with a pre-fall collection showcasing coats long and roomy enough to be worn by men or women. And they are built for longevity. Several years ago, Ms. Fischelis bought a slender black Marni coat with a jet beaded collar. “It’s like a jewel, timeless,” she said. “I wear it and wear it.”

Mr. Wu similarly swears by the cloth coat’s staying power. “You can have one in your wardrobe for decades,” he said. (A nice way to think about it, when the coming fall remains a question mark.) “Buying a coat for one season doesn’t feel relevant anymore.”