Melissa Fernandez and Lyvan Verdecia met through social media in the spring of 2015. She was living in Harlem and had been performing for three years with Ballet Hispánico, a contemporary dance company in Manhattan. He was in Miami working as a day laborer, hopping on trucks bound for South Florida fields in need of harvesting. He also worked as a roofer and at an industrial laundromat in Miami.

Ms. Fernandez’s family, also from Cuba, had a lot more, but never forgot their own beginnings. “My parents reminded us every day of the struggles and hardships they went through in Cuba,” said Ms. Fernandez, 30, who was born in New Jersey and raised in Miami. 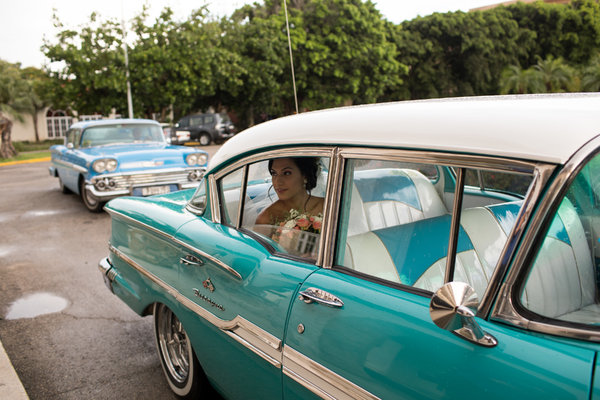 Her parents, Terri Fernandez, an account supervisor at an insurance company, and Omar Fernandez, who works in sales at a funeral home, told her stories about the circumstances — little food, no access to medicine — that had brought them to the United States from Bayamo, Cuba, in the 1960s. Their past struggles fueled their commitment to help their daughter dance professionally and knowing of their background taught Ms. Fernandez compassion for others.

After enrolling her in ballet classes at the age of 5, they saw her through a dance program at Juilliard that opened doors to New York dance auditions upon her 2012 graduation.

The journey that led Mr. Verdecia from Havana to Miami in late 2014 and then the wood floors of Manhattan dance studios, and eventually Ballet Hispánico, starts with a record player at high volume. Though he spent much of his childhood training in school to be a classical ballet dancer and was well-versed in Nutcrackers and Swan Lakes, Mr. Verdecia’s first dance moves were without toe points.

“My entire family were very, very good dancers, but social dancers,” he said. “They would dance salsa, merengue, mambo. The music and dancing was very fundamental in my household. It was how we would share the love.”

Inspiration to dance professionally came from a cousin who left Cuba for London to perform in that city’s Rambert Dance Company. When he was 9, Mr. Verdecia enrolled at a Havana ballet school. His mother, Martha Marrero Iglesias, who works for the Cuban Ministry of Information, and of his father, Esteban Verdecia Durruthy, an inspector of shipping containers, encouraged him.

In 2014, he auditioned, successfully, for the Ballet Nacional de Cuba. His first trip with the company was to Mexico. On his second, to Canada, he left the troupe and his countrymen to make his way to Miami, crossing the border in Buffalo. “I spoke with my family about it, and they supported me,” he said. A cousin in Miami, his only contact, helped him find work in the fields.

Mr. Verdecia was granted what is called parole, a discretionary federal program that allowed Cubans to obtain green cards to work in the United States.

“That was how I first met Ballet Hispánico,” Mr. Verdecia said. “They had come to Cuba in October 2014, and one of the pieces they were performing was her piece. She was like, ‘Lyvan! You need to go see it!’ I was like, of course I’m going to go see it. And I fell in love, really. They were a company outside of Cuba dancing contemporary dance with Cuban music, with Latin music, with everything I loved.”

In May 2015, while he was working the fields, Mr. Verdecia got the email he had waited for. “I would say that was one of my best days,” Mr. Verdecia said. “I had been trying to save enough money to get to New York, and finally he emailed and asked if I was still interested in the company. In my mind I said, ‘You have no idea.’” Mr. Verdecia and Mr. Vilaro corresponded about a possible contract with Ballet Hispánico. And then Mr. Vilaro connected Mr. Verdecia with Ms. Fernandez, Ballet Hispánico’s union representative.

“I contacted him because I knew the language barrier was hard, and I figured he might need a place to stay in New York,” Ms. Fernandez said.

With Ms. Fernandez’s help, he found an apartment in Jersey City. He also found an English coach. “I didn’t speak any English. My English was very basic,” Mr. Verdecia said. “She helped me with everything.”

What he didn’t need help with was his dancing. Mr. Verdecia is Ballet Hispánico’s youngest member, and the only dancer to be offered a contract without an audition. “I got a contract for six months,” he said. “That was my audition period.”

It was also the period in which he fell in love with Ms. Fernandez. “Immediately when I saw her I was like, ‘She’s Cuban, she’s beautiful and she’s a hard worker,’” he said, adding that “her six-pack abs caught my attention.”

But their romance proved to be an intricate tango.

“I’m going to be very honest,” Mr. Verdecia said. “When I was living in Jersey City, I had a girlfriend.”

When Ballet Hispánico traveled to Mesa, Ariz., in September 2015 to shoot scenes for the film “Great American Dance,” there were signs his relationship was in trouble.

“There was a lot of excitement, but also stress,” Ms. Fernandez said, of the film project coinciding with the new dance season. “The night after we finished filming we had a huge party at our hotel. Lyvan put on salsa music, and we had been flirting for a while, and there was an evident attraction, so I went up to him and said, ‘Hey, can we dance?’ Then I made the moves on him. I gave him a kiss.”

“From that moment on I was super excited about Melissa,” Mr. Verdecia said.

By May 2016, Mr. Verdecia and his girlfriend had broken up. He moved out of Jersey City and into an apartment in Manhattan’s Washington Heights neighborhood with two fellow dancers. His relationship with Ms. Fernandez was on an upswing, but they kept it low key for fear of appearing unprofessional. If staying reserved about his feelings for her was difficult in New York, it was especially hard when they traveled with Ballet Hispánico to Havana that year, his first visit home since leaving the country.

“That trip was very emotional and bittersweet for Lyvan,” Ms. Fernandez said.

But his parents’ immediate embrace of Ms. Fernandez helped. “They welcomed her like a new member of the family,” Mr. Verdecia said.

In 2017, Mr. Verdecia again moved, this time into Ms. Fernandez’s Harlem apartment. “That’s when I decided to get engaged,” he said. Like the beginning of their courtship, getting to the proposal proved complicated.

First, he wanted to be sure that Terri and Omar Fernandez felt he was a worthy son-in-law. When he met them during a December 2015 tour stop in Miami with a different dance company’s “Nutcracker,” their reaction to him had been lukewarm.

“It was a little tense,” he said. “They weren’t sure I was the right one for Melissa. But I worked very hard and now I would say we are like family.” Before he started ring shopping in early 2017, he flew to Miami and spoke with Mr. Fernandez. “I mentioned that I wanted to solidify our relationship, and he agreed. That was the green light for me.”

But then came a financial roadblock. “As dancers we don’t make much money,” Mr. Verdecia said. “I wanted something beautiful that describes our relationship, but I only had $1,200. I was looking and looking, but the ones I was seeing were too expensive.”

While he was struggling with his budget, Ms. Fernandez was struggling in a different way. In April, a friend who Mr. Verdecia had confided in told her he was planning to propose. “I thought we weren’t ready,” she said. “I knew Lyvan’s financial situation, and I didn’t want to put pressure on him. He was trying to support his family.”

She told him they should wait. Months later the perfect ring — one with infinity signs, like the matching tattoos on their arms — came along. Mr. Verdecia splurged. On Dec. 20, 2017, while they were in Florida for the holidays, he asked Ms. Fernandez to join him on Miami Beach at 4:30 a.m. to watch the sunrise.

“I saw candles in the distance, and a table and chairs,” Ms. Fernandez said. “I was like, ‘Look at what some other couple is doing, Lyvan. We’re not the only ones here.’ And he was like, ‘No, this is for us.’” Mr. Verdecia knelt in the sand and, in tears, presented a ring box. Ms. Fernandez, surprised but elated, said yes.

“It was the most beautiful way to do it,” she said. “He made everything so meaningful, so memorable.”

A similar spirit suffused their Aug. 1 wedding at the Cuban resort Club Habana. Ms. Fernandez, in a flowing, strapless white dress by Tatyana Merenyuk, the designer of her gown for the 2019 Ballet Hispánico gala, walked down an outdoor, Spanish-tiled aisle with her father to a simple altar dotted with rose petals. Her four bridesmaids wore teal and emerald green dresses. Mr. Verdecia wore a royal blue suit, and his three groomsmen wore guayabera shirts and khaki pants. About 80 guests from both sides of the Florida straits watched as AnaMaria Correa, a former administrator at Ballet Hispánico who was ordained by the Universal Life Church, officiated in a ceremony conducted in Spanish.

“Melissa and Lyvan come to this day as friends and partners in life, already united in their hearts and souls,” she said. After the couple exchanged rings, they held hands and made a promise to each other. “From this day on,” they repeated together, “You will walk with me. My heart is your refuge and my arms are your home.”

Everything but Ballet After a buffet dinner and toasts in the resort’s hall, guests danced to salsa and American pop music. A few puffed cigars.

Blessings Mr. Verdecia’s parents have never been to the United States, but they talk to their son often. His mother, Martha Verdecia, said he was born with an instinct for perseverance. “He has always pushed to get what he wanted. We bless this marriage.”