Ginger Zee put her toned legs front and center on Wednesday as she and her weather colleagues represented GMA at a game of kickball.

The show’s chief meteorologist looked incredible rocking a pair of tiny pink shorts and a bright blue T-shirt emblazoned with ‘Good Morning America’ in a yellow circle across the front. Ginger wore her curly hair up in a tight ponytail and completed her look with white sneakers and black ankle socks.

Sharing snaps of their outing on her Instagram Stories, Ginger posed alongside her colleagues and wrote: “TEAM WEATHER representing at @goodmorningamerica kickball.”

She also re-shared a snap from her teammate Sabrina Parise, which saw Ginger and the team standing in a field waiting to kick off the game – although it was Ginger’s long legs that stole focus.

MORE: Ginger Zee compares her hair to a caveman’s in revealing new photo

MORE: Ginger Zee inundated with praise after she calls out follower for criticizing her parenting

Among the team was Ginger’s newest colleague Kenton Gewecke, who joined the show last month as meteorologist producer. Alongside GMA, Kenton will also produce for World News Tonight and other ABC News Live shows. 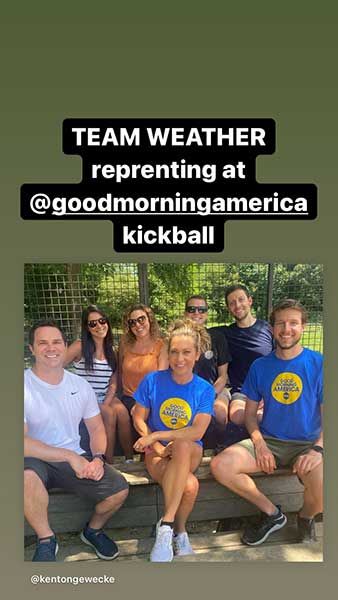 He clearly felt welcomed at the event as he captioned the same photo: “The @abcnews weather team! Today @ginger_zee and I represented the weather team for the @goodmorningamerica kickball game.

“It was great getting to meet so many new colleagues socially as I get to know them around the office. A major plus: the whole (new) weather team was together for the first time! Everyone is extremely welcoming and supportive. Off to a great start here.” 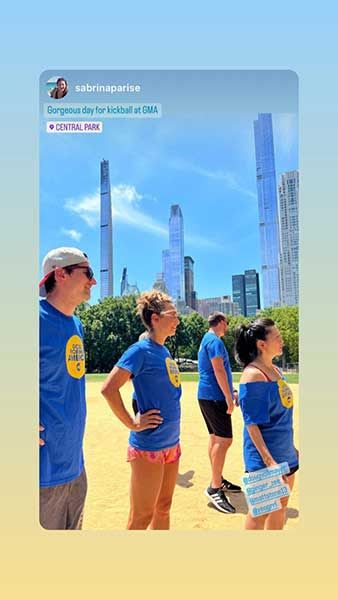 Ginger was among the first to comment and wrote: “Goooooo team! We are so fortunate to have you.”

Kenton isn’t the only new star at GMA. Earlier this month, it was revealed that Janai Norman is joining the show as a new anchor on the weekend team, meaning she’ll take a seat alongside Whit Johnson and Eva Pilgrim and replace Dan Harris who left in 2021 after 21 years.