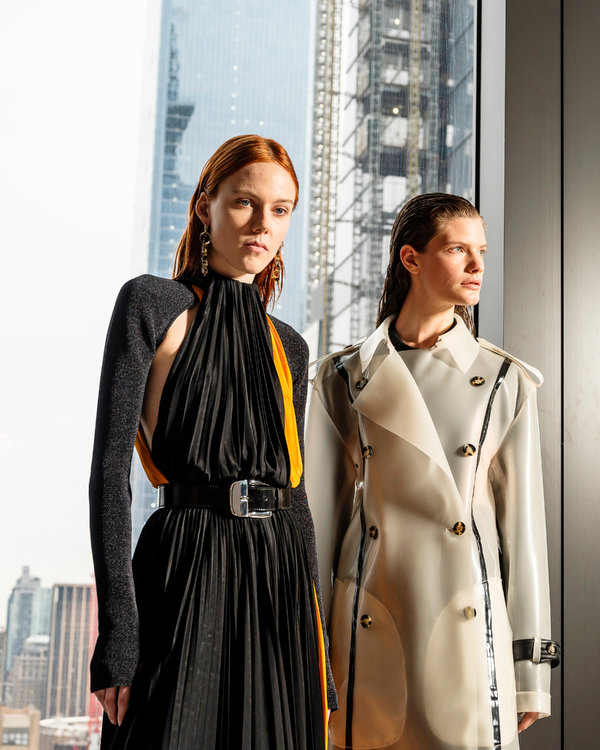 On Monday afternoon, as hundreds of pet owners gathered in the familiar confines of Madison Square Garden for the Westminster Dog Show, Proenza Schouler lured the fashion crowd to the 22nd floor of an unfinished building in the newly gentrified kennel of Hudson’s Yards on the Far West Side of Manhattan — the steel and glass urban oasis aiming to change the gravitational poles of the city — to show them where the big Labradoodles were going to play.

There were sweeping views over the city’s aquatic edge. A paved piazza for socializing in the summer. Towering walls of reflective windows. And a freshly crossbred item of clothing that was so new it didn’t even have a name. What was it?

Imagine a ribbed knit sweater with the entire body cut away, leaving only the sleeves and the round neck, so that the neck really looked more like a necklace. And the whole thing could be popped over the head as one piece and worn with, say, a jacket (maybe a slightly oversize white moleskin men’s wear kind), so the sleeves acted really like a scarf (only one that would never fall off) or an extra set of lapels. And if you got cold, well — you could always use the sleeves as actual sleeves, or arm warmers.

O.K. Maybe it wasn’t the best idea. But at least it was an idea. There have been astonishingly few of them around. And after last season, when the designers Lazaro Hernandez and Jack McCollough first returned to New York post-Parisian sojourn and devoted their entire collection to denim, it was a positive development.

So were the skinny legging-like pants unzipped at the ankle to flare out and worn under pretty much everything, like halter dresses in navy and bronze pieced together in asymmetric puzzles and skinny turtlenecks with tracings of feathers across the back of the arms from wrist to wrist. There were coats that were themselves hybrids: a faded denim jacket-turned-dickie and attached to the front of a trench (you could also detach it); a leather motorcycle jacket pieced onto a black suit jacket to give it a bit more attitude.

For evening, pleated spaghetti-strap frocks came layered under knit bralets with sashes that could be wrapped and tied around the waist, though they were left dangling on the runway. There was a lot of playing with negative space.

Most of it made more sense than the scarf sleeves. The sceeves? The slarf? If you can’t figure out what to call something, it’s probably a sign that it’s not quite as resolved as it needs to be.

But the sense that everything is still under construction? That’s shaping up as the theme of the season. At least Mssrs. Hernandez and McCollough were trying to grapple with the bigger picture. So many other designers seem to have abandoned ambition.

There’s a lot of talk of love around this fashion week. “Fall ’19 is about love,” the Sies Marjan show notes read. The Prabal Gurung world is a place where “integrity, purpose, levity and love are our most celebrated virtues.” At Carolina Herrera, Wes Gordon just wanted to make “happy” clothes.

These are laudatory emotions, especially at this not particularly loving time. But translated on the runway, they mostly seem to mean: color! It can brighten a gray day. But the impact doesn’t go much further than that.

Shades of lavender and apple green and baby blue were layered one atop the other at Sies Marjan; cherry and orange or forest green lace-trimmed charmeuse or mesh lace slip dresses draped over a shoulder and paired with skinny contrasting pants. There was a lot of grape.

Orange made a big showing at Herrera, in the form of a tentlike floor-length silk shirtdress and a short flute-sleeved mini; so did bright cobalt blue, in an asymmetric tunic, and bubble gum pink, in a cloudlike evening gown. And at Prabal Gurung, they all got mixed together in a bright hippie trail soup, along with chunky yeti knits, sari silks and … pinstripes? In his version of inclusivity, there’s a little something for everyone.

Not so at The Row, where Mary-Kate and Ashley Olsen have a very specific clientele in mind — women in search of very expensive, very understated, very tactile clothes to soothe the troubled mind — and a willingness to move at a slow-dance pace. (Half their audience always seems to fall into a meditative state while watching a collection.)

Their innovation this season: a swaddling funnel neck in oversize white cotton and organza shirting layered under broad-shouldered collarless jackets seamed in at the waist and buttoned on the side, a tailoring trick that creates a fold at the ribs and add a curve of sensuality to an otherwise austere silhouette. It seems like a small thing — and it was — but it made a difference. They understand how to shift the details.

For a bigger thing, however, see the reinvention, for the fourth time, of Helmut Lang, the brand that defined a certain kind of intelligent 1990s minimalism, slouching tailoring into the perverse, casting off gender lines and influencing a generation of designers, including Raf Simons (late of Calvin Klein) and the Proenza team (that moleskin, those dangling straps; Mr. Lang did them first). Although reinvention is maybe the wrong word. Reincarnation?

The founder left in 2005, and since then the brand, which is owned by Link Theory Holdings, has undergone various reboots, including as a contemporary denim line and, in 2017, as an in-your-face experiment from Shayne Oliver of the now-defunct Hood By Air. It has never looked as close to its origins, however, as it did on Monday, under the current designers Mark Thomas (creative director of women’s and men’s) and Thomas Cawson (jeans). It’s as if they finally freed themselves from fear of the archive.

The old elongated hip-slung pants were back; the layers of cotton and sheer tank tops, the Crombie coats in tweed and glossy cherry over transparent T-shirts, the tweed boilersuits and parkas and pink denim and lamé shifts that somehow suggest undress more than dress. How ’bout them puppies?

They may have been old, but they looked surprisingly fresh. It’s something to build on. 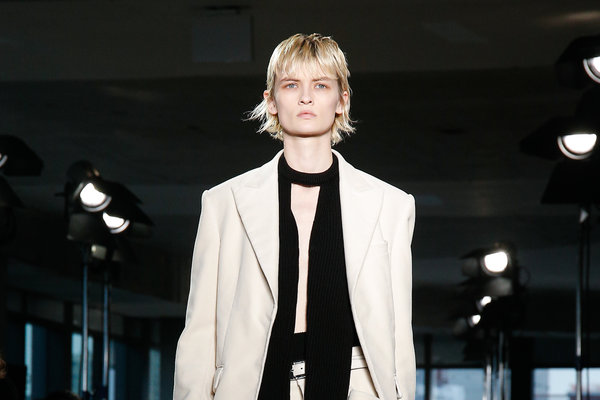 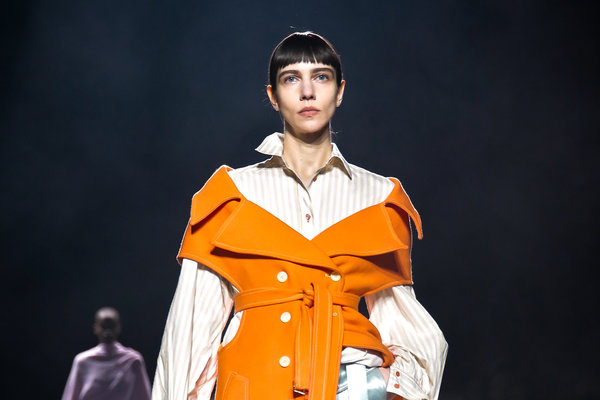 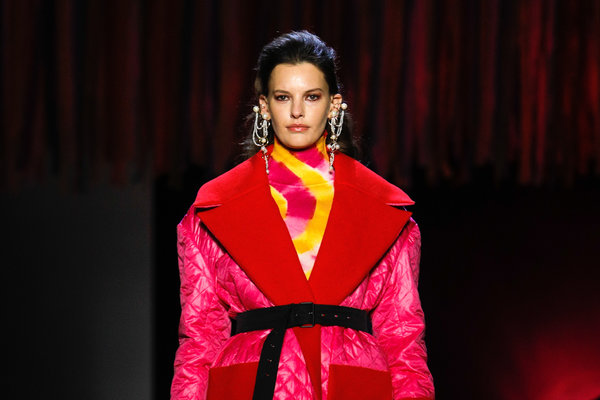