Someday the "gilet jaune," the fluorescent yellow hazard vest that has become synonymous with the French outcry over fuel prices, growing income inequities and much more, will end up in a museum as one of the most effective protest garments in history.

Whoever chose it (and no one is claiming authorship, just as no one has stepped forward as a leader of the movement), and for whatever reason, instinct or insight, it was a potent idea. So effective, in fact, that the French president, Emmanuel Macron, announced that fuel taxes would not be raised. There has not been such a compelling sartorial symbol of revolt since the Sans-culottes seized on their trousers as the point of visual difference with the aristocracy during the French Revolution. 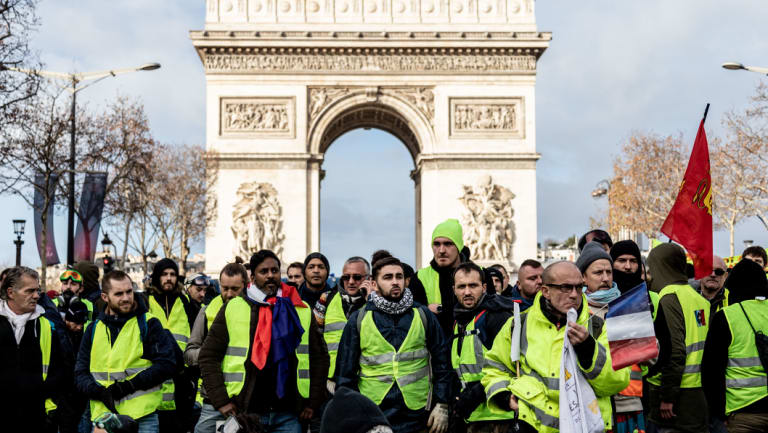 Destined for a museum … protesters wearing yellow vests in front of the Arc de Triomph in Paris.Credit:Bloomberg

Little wonder the protests have spread to Belgium: The uniform of this revolution is as accessible as the frustration and fury. In Serbia, a deputy for the opposition party showed up at the parliament and warned: "We want normal gas prices, or else you'll get yellow vests on the streets of Belgrade and Serbia."

The vest is also notably inexpensive to acquire (you can pick one up at most discount variety stores such as KMart for less than $10). And it is so ubiquitous that even those who aren't officially part of the movement can seem to take part. Witness the glee on social media when Macron disembarked for the Group of 20 summit in Argentina only to be met by airport workers wearing … bright yellow hazard vests.

It is better than any soapbox. "Historically, and presently, dress practices have been and are being used to debate what it means to be a citizen, what it means to belong, or not to belong, to a certain body politic," said Erin K. Vearncombe, a lecturer at Princeton University who specialises in the cultural anthropology of dress. "Often, these practices are used by individuals that have not been included in the body politic, to contest political structures and bring about change."

And yet it is getting harder and harder to use clothing as this kind of tool, or find the kind of clothing that can function as this kind of tool. The clear demarcations of class and values traditionally associated with dress have been eroding for a long time now, because of both the general social revolt against formality and fashion's own tendency to co-opt and thus denature so many of what were once the outfits of the outsiders and the disenfranchised.

The torn denim and tie-dye of the hippie generation have been absorbed by streetwear and the runway; the leathers and berets of 1968 embraced by Dior; the skulls and safety pins of the British punks adopted by Alexander McQueen and Versace. It is impossible to take a garment seriously as a cry of rage or despair once it has hit the haute couture catwalk.

Which is too bad, because clothes have played important supporting roles in the narrative of revolt and extremism, whether right or left, for centuries. Recently more than ever.

The suffragists settled on colour – white, green, purple – to represent their demands and characters. (As we all now know, since Hillary Clinton directly referred to the practice in her campaign.)

More recently, the pink pussy hats worn during the Women's March in 2017 served as a visual stalking point, as did the black dresses worn at the Golden Globes in support of #TimesUp and the black garb adopted by female lawmakers at President Donald Trump's first State of the Union. The black boots, sweats, pants and ski masks of the Antifa movement are a more broad-based and free-floating signifier of anarchy. 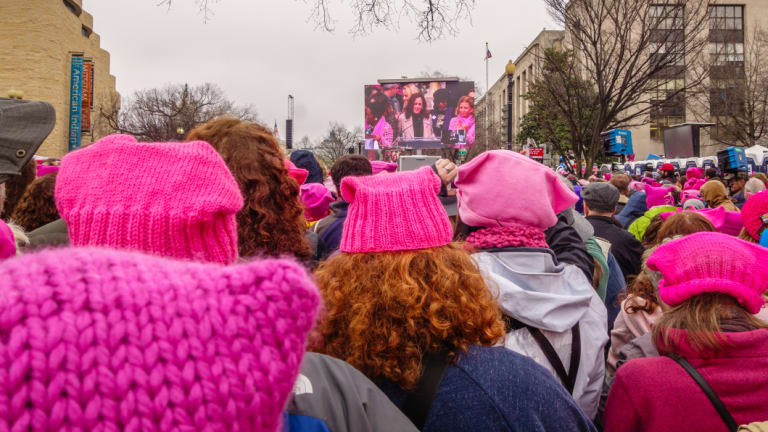 The pink pussy hat was another protest garment that has made its mark in the past two years.Credit:Shutterstock

Still, black is so ubiquitous and so open to interpretation, it somewhat undermines its ability to be an effective protest garment. It is momentarily powerful but not specific enough for the effects to linger. That explains, in part, why "many of these practices do not translate into the nomenclature of the movements in the way that yellow vests did, pretty much immediately", Vearncombe said.

You can count such transcendent wardrobe totems on one hand: the Sans-culottes, the Brownshirts. (It may seem wrong to lump the Brownshirts with the others, but it was a political movement identified by clothing.) So what made the difference?

In part, the accessibility of the yellow vest itself. But the decentralised nature of the movement also probably played a part, making the vests even more important as a unifying thread and call to arms.

Protest movements without such a uniform seem to be the exception in modern times, and can be less effective for it. Occupy Wall Street in 2011 lacked a visual cohesion. Protesters had many looks, a sprawl that was mirrored in the range of their grievances.

"The dressed body within the body politic is often the only opportunity underrepresented individuals have to participate in negotiations of citizenship, but it's an amazing opportunity, too," Vearncombe said. "It is every day, it is participatory, it is collaborative and democratic."

It should not really come as a surprise that France – the country that spawned the Sans-culottes, where la mode is considered part of the culture and the patrimony as well as an instrument of regime change – understands this.