Sophie Countess of Wessex, 55, and Prince Edward appeared at an important event for Remembrance Day, Armistice Day. She attended the service at the National Memorial Arboretum.

Sophie looked stunning in a navy ensemble. Her hair was pulled back in a ponytail beneath a Jane Taylor hat with a net.

She wore a double breasted coat with a large collar and silver buttons.

On her lapels she wore a poppy badge and a pin to celebrate the armed forces.

It appeared to be an RAF badge and the Countess has a role as Honorary Air Commodore of Royal Air Force Wittering.

Large sparking earrings hung in her ears and Sophie carried a Lulu Guinness clutch bag, which is embroidered with a poppy motif.

Sophie has worn the very appropriate bag for Remembrance Day events since 2013.

The Royal Family said of the event: “Their Royal Highnesses laid wreaths at the Armed Forces Memorial in a tribute to all those who have given their lives in service to their country.

“Their Royal Highnesses also viewed the names of the fallen on the Armed Forces Memorial in a moment of reflection.”

Fans of the Duchess were quick to praise her and her husband.

One said: “Beautiful photograph of a lovely couple paying homage and respect of the fallen.”

Another wrote: “These two are making a great job and are so underestimated!”

“Always love to see the Earl and Countess,” one wrote.

Another said: “The Countess is so beautiful!”

“Sophie looks beautiful in the navy blue,” one fan wrote.

Another said: “About time the Earl and his gracious countess had a more front line in royal life. A good asset to the royal family.”

Other members of the Royal Family rallied to pay their respects to all those who have lost their life in war over the past days. 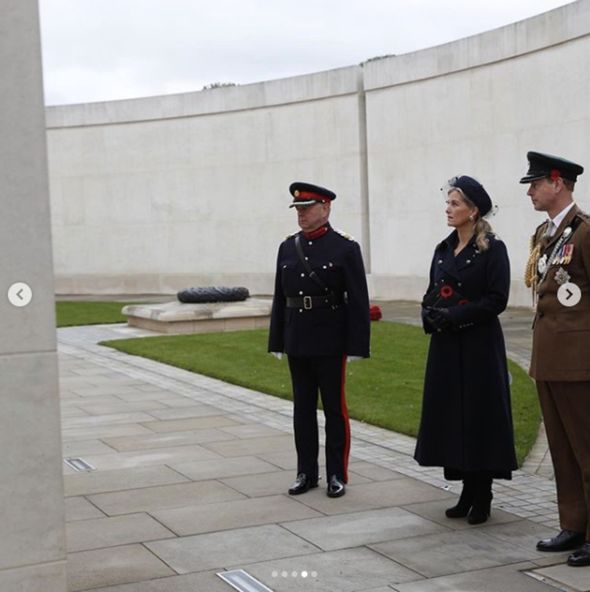 Kate attended Remembrance Sunday ceremonies at the Cenotaph on Sunday.

Meghan Markle joined Prince Harry in LA at a cemetery to lay a wreath.

Kate Middleton also video called those who have lost loved ones in war.

The Duchess of Cambridge looked stunning in a white and black blouse for the touching event.

During the call the Duchess said: “It’s been a real honour to speak to all of you and I think I speak for the whole nation when I say just how proud you should be of your loved ones, and for the sacrifice and the bravery that they’ve shown.

“I’ll certainly be thinking of you this difficult week and will be for many years to come.”