A MUM whose daughters breastfed in tandem – with one stopping just before she was five and the other still continuing aged four – says they rarely get ill.

Crediting her nursing with hardening their immune systems, makeup artist Natasha Keane, 38, says she lets the child decide when to stop breastfeeding. 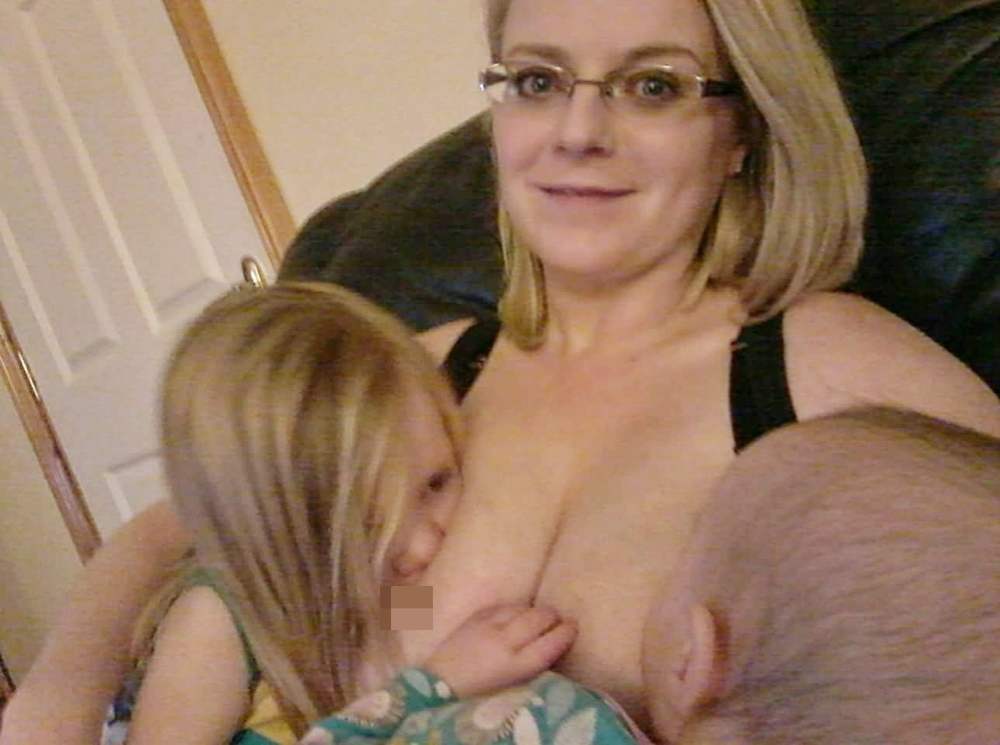 But Natasha, of Galway, Ireland, whose husband Adam, 35, owns his own gym, says that, as a first time mum to her son Stephen, 19, from a previous relationship, she believed that breastfeeding after a year was "creepy."

Now extolling the virtues of nursing and defending a woman's right to do so in public, Natasha, also mum to Ellie, six, and Grace, four-and-a-half, said: “I try not to let the comments and stares get to me, but I have been made to feel uncomfortable.

“I find it such a huge double standard. It’s okay to put women in bikinis or lingerie on huge advertising billboards, but it’s not okay to let a mum to subtly feed her child?

“To me, breastfeeding is the most natural thing in the world. Ellie has never been to the doctor's for a sickness bug in her life, and never needed antibiotics, and Grace has only been once for a chest infection she couldn’t shake. 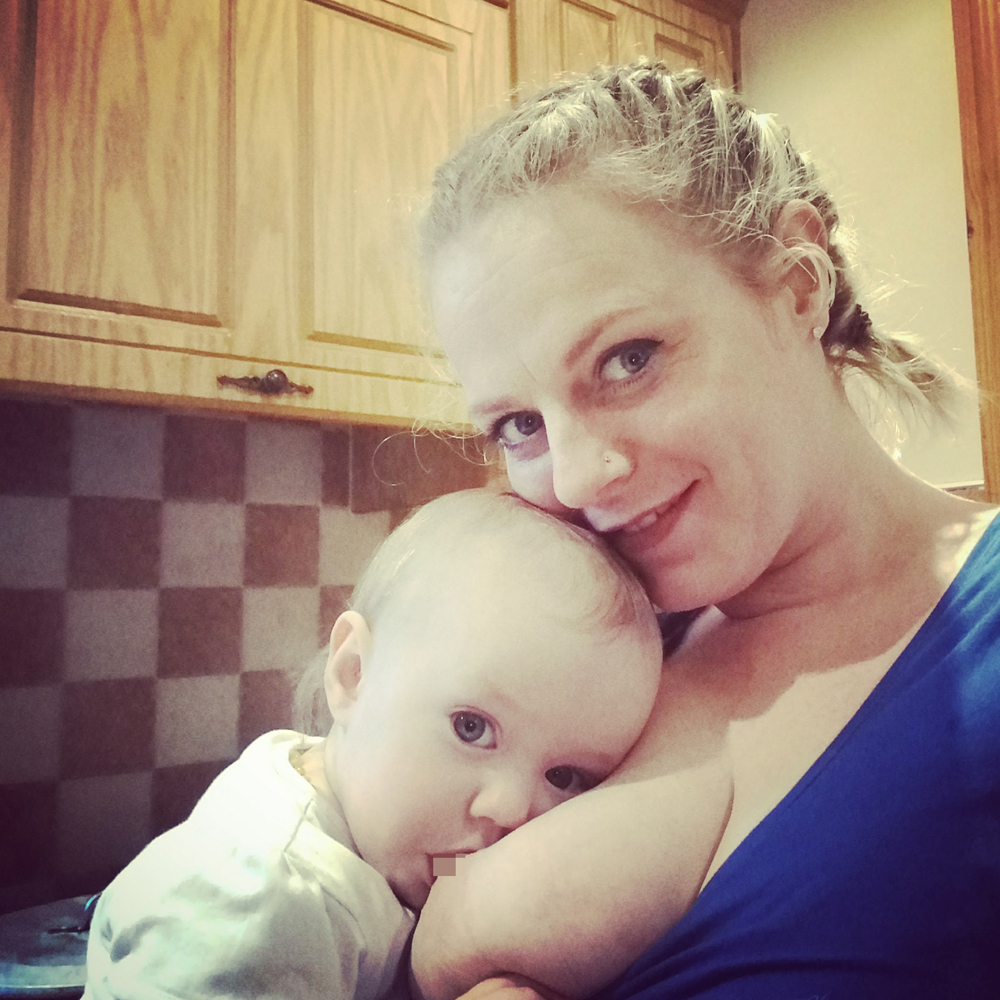 “I absolutely believe that it’s breastfeeding that has made their immune systems so strong.”

In contrast, when Natasha had Stephen, who works in a restaurant, she was placed on medication when he was just four months old and had to stop breastfeeding.

“I wanted to do it for longer, but I was only 19 back then and didn’t think I could question my doctor,” she said.

“I cried so hard for about a week afterwards. Stephen struggled to take his bottle and it was very stressful.”

Determined not to let history repeat itself, when Natasha fell pregnant with Ellie, she vowed to be more prepared and joined a local breastfeeding group.

I try not to let the comments and stares get to me, but I have been made to feel uncomfortable.

“I walked into my first meeting, and saw a woman tandem feeding her three-year-old and 18-month-old, with one at each breast,” she recalled.

“My jaw hit the floor. I genuinely had no idea it was possible to feed children past the age of one – let alone two at the same time.

“Instead of judging, I simply asked questions.”

After finding other similar groups and speaking to several other mums, all supporters of 'extended breastfeeding', she also read articles on the subject, including one examining the breastfeeding habits of other mammals.

Combining her findings with information on the NHS website, saying babies are passed valuable antibodies to help protect them against infection through their mother’s milk, she became increasingly convinced that this was the way forwards. 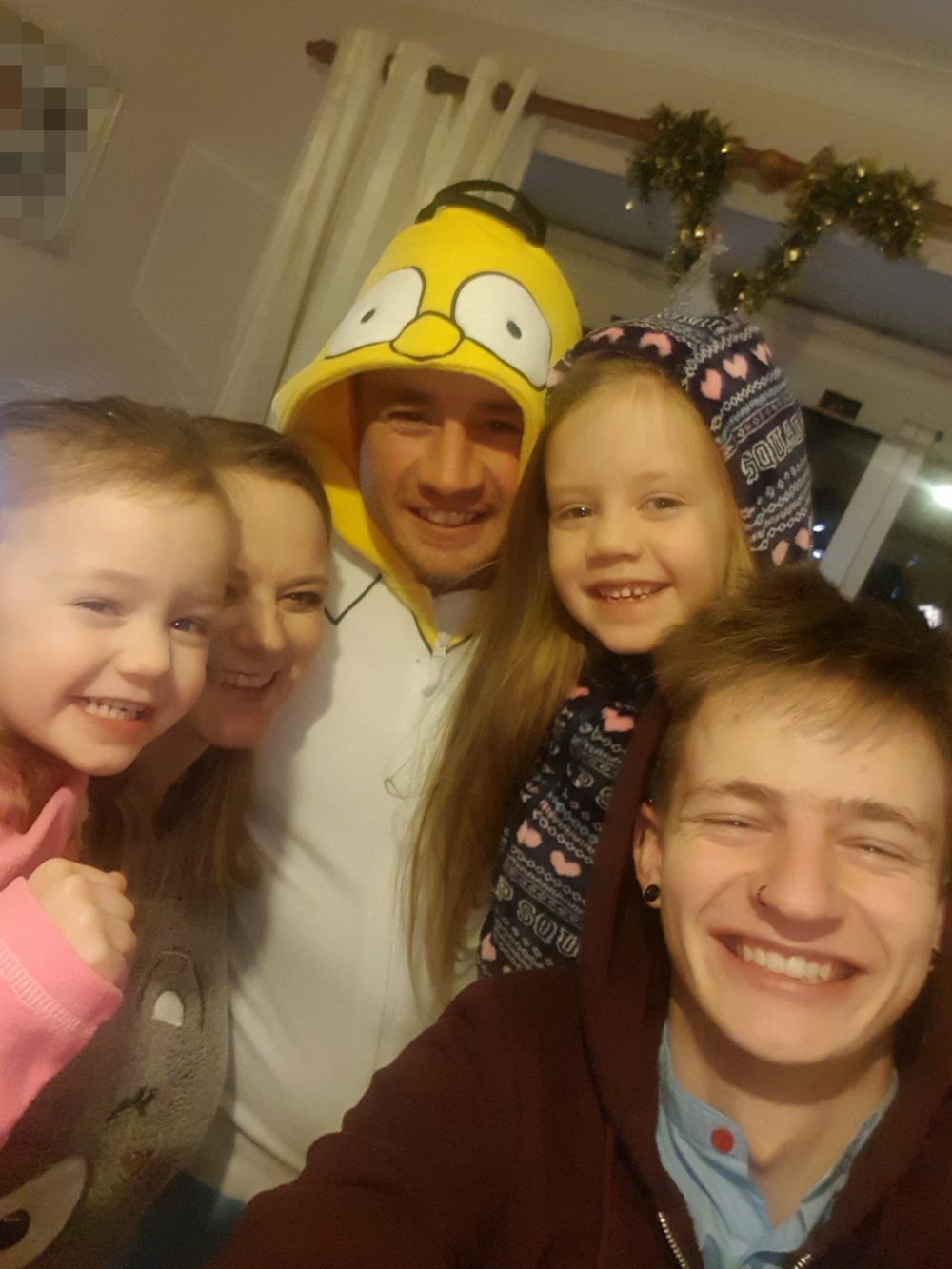 Meanwhile, she discovered that even the World Health Organisation states that breastfeeding can continue for up to two years and beyond.

According to their recommendations – made together with UNICEF – children should start breastfeeding within an hour of being born and be exclusively nursed for six months, going on to be breastfed on demand then, from six months onwards, should begin eating safe and adequate foods, while continuing to take their mum’s milk.

Buoyed by her findings, Natasha became an advocate for natural stage weaning, saying: “There’s a saying in the community – 'Don’t offer and don’t refuse.'

"Putting that into practice with my girls meant that, while I wasn’t sitting them down like clockwork, offering them my milk, I wasn’t saying no if they asked.”

Breastfeeding Ellie with no set deadline in mind of when to stop, when Grace arrived two years later, she nursed them – one at each breast – together.

“I tandem fed for two years,” she said. 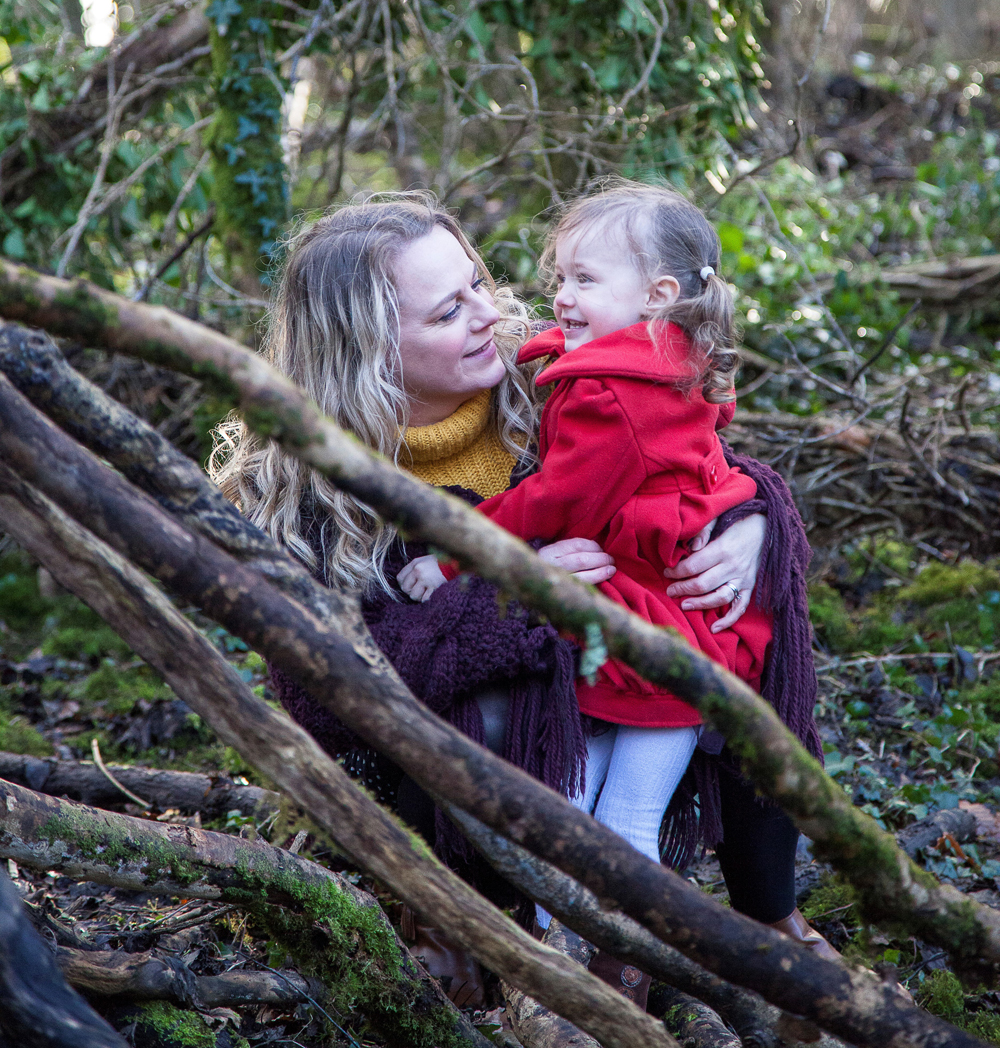 “I was a little apprehensive at first about the practicalities of it all, but you find your own groove, and it gets easier the more you do it.

“As Ellie was a little older by then, I could explain to her to be patient and let Grace latch on and settle in first.

“Every single night, they would fall asleep without fail, one on each breast, holding hands.”

While Ellie stopped wanting to breastfeed just before she turned five, Grace continues to suckle once in the morning and once in the evening.

But Natasha still deals with negativity, which she blames on people's miseducation, rather than on deliberate nastiness. 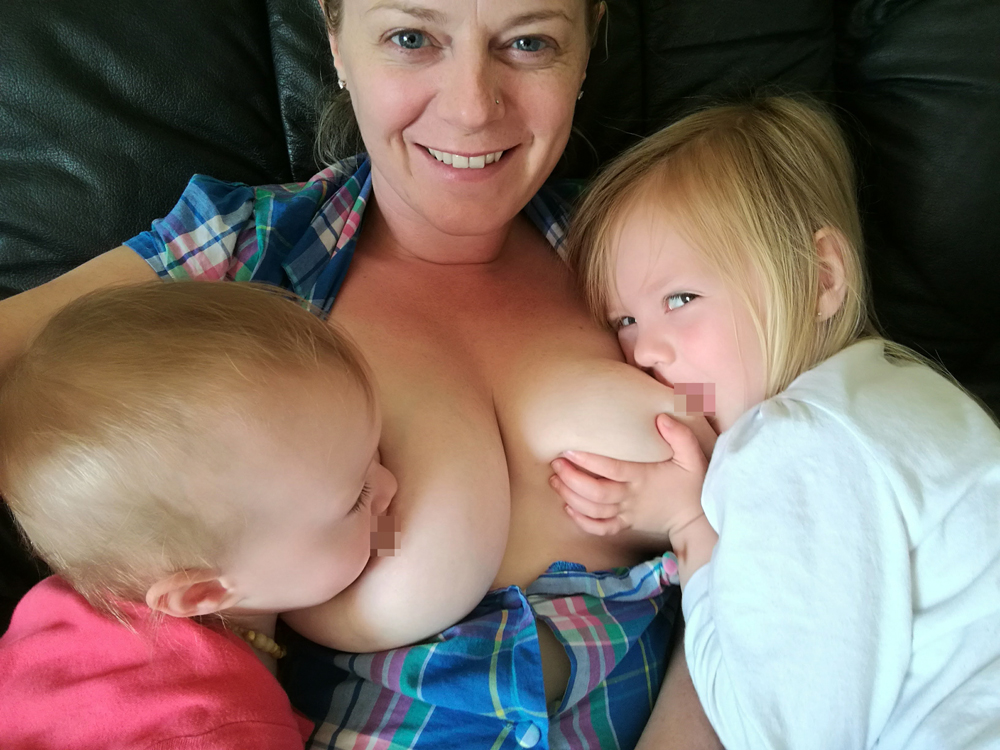 “People see breastfeeding as fair game – something everyone is allowed to have an opinion on and criticise,” she said. “I never would, as it is every mum’s choice, but I know if I said something about bottle feeding, it would be unacceptable.

“I have received some difficult comments over the years. When Grace was just eight months old, I had somebody say to me that I should be force-feeding her into weaning by that point. I just thought, ‘What would you say if you knew I’m also feeding her older sister?’

“I also get lots of people remarking that I’m ‘still’ feeding – with emphasis on the still.

“I don’t think people are deliberately trying to shame me, or be evil, though. It’s a lack of education – even within the medical profession.

“We have lactation specialists, but not many of them, and most doctors and nurses aren’t armed to the teeth with the same level of information. That’s how you end up with mums like I used to be, who don’t realise you can feed past a year, or think it’s wrong to.” 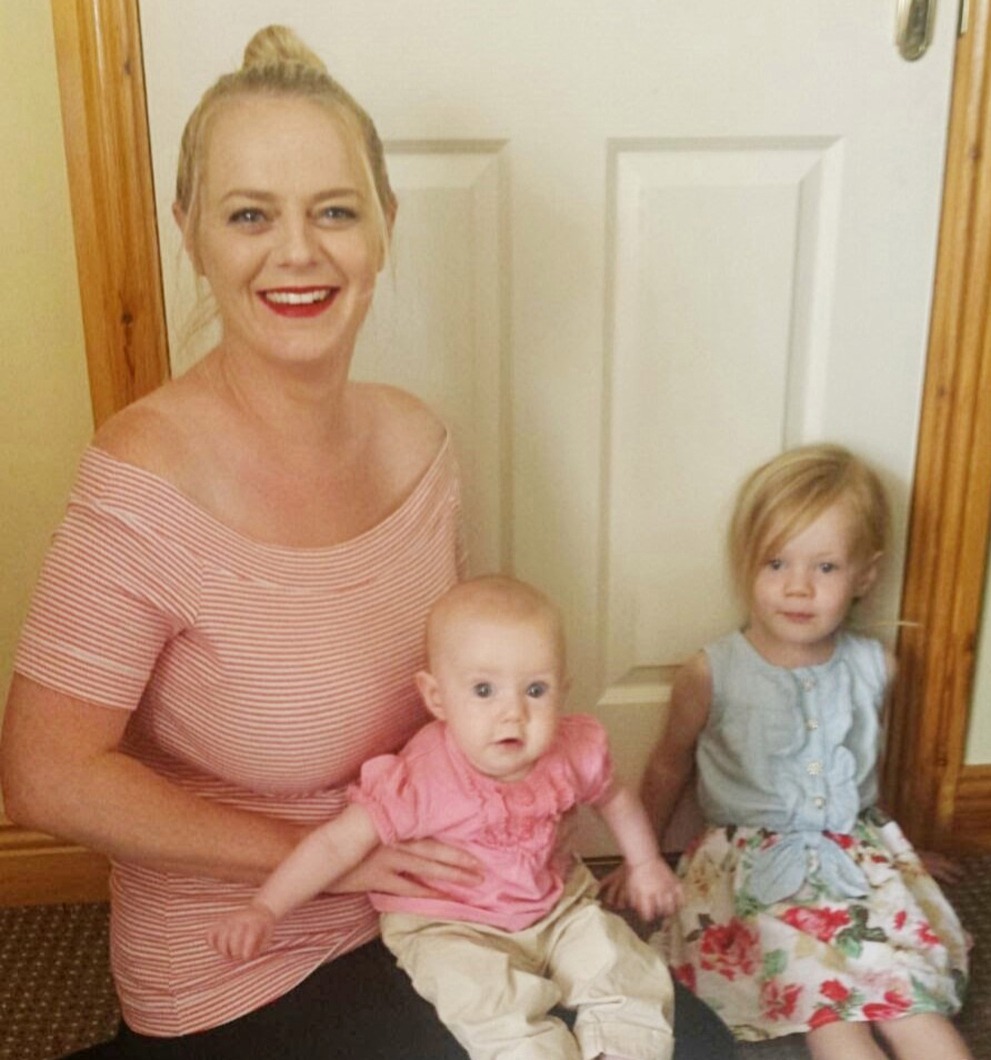 By sharing her story, Natasha, who says that her husband Adam is her biggest cheerleader and is fully supportive, hopes to normalise breastfeeding and reassure other mums that they do not have to stop before they are ready.

Also aware that some mums cannot breast feed, she wants to encourage them to find their local milk banks, where women can donate their own excess supply.

In the past, she has donated six litres, which went on to help 22 different premature babies, as well giving a stash to some mums she met through Facebook, who could not nurse themselves as they were having chemotherapy, but did not want to give their babies formula.

“It’s up to every mum as an individual what they want to do, and I understand that some have tried and tried, but simply cannot breastfeed,” she explained.

"Because of the constant flow of oxytocin – known as the love hormone – breastfeeding is a great mood booster. I had postnatal depression with Stephen and Ellie, so thought it'd be written in stone that I would with Grace, but I didn't.

“Before you make a comment, educate yourself. If a mum ever mentions something to me that I don’t understand, I will keep my mouth shut, then go away and look it up.

“Whether I agree or not is beside the point. It’s education that’s important.”

What are the recommendations around breastfeeding?

The NHS recommends breastfeeding your baby exclusively (feeding them breast milk only) for the first six months, but it's completely up to you to decide when you want to bring it to an end – and there's really no right or wrong way to do it.

They note that solid food shouldn't replace breast milk, as there is evidence to suggest breast milk helps a baby's digestive system when processing solid food for the first time.

"Once they are eating solids, your baby will still need to have breast milk or formula as their main drink up to at least their first birthday," recommends the NHS.

"Cows' milk isn't suitable as a main drink for babies under one, although it can be added to foods, such as mashed potatoes."

For example, dropping one feed in the day or at night time.

After around a week, you can begin to think about dropping another.

"If your baby is younger than one year, you'll need to replace the dropped breastfeed with a formula feed from a bottle or (if they are over six months) a cup or beaker, instead," they say.

You can breastfeed for as long as you want, and while the NHS recommends breastfeeding your baby exclusively for the first six months, you shouldn't feel like you cannot continue for longer.

The World Health Organization says: "Exclusive breastfeeding is recommended up to 6 months of age, with continued breastfeeding along with appropriate complementary foods up to two years of age or beyond."

We previously told you about breastfeeding in public – what is the law and what rights do mothers have?

We also told you about the eight-month pregnant woman who has the BEST response for commuter who won’t move his bag so she can sit down.

And we showed you the rookie parenting mistake Kate Middleton made when shopping for George’s school uniform – and every mum can relate.