ON 12 October 2020, Kirsty Brown was putting her daughter Hallie to bed when she heard a piercing scream from the kitchen.

At first, the mum-of-three, 34,  from Bacup, Lancashire, didn't think much of it as she was used to her kids' playful shouts. 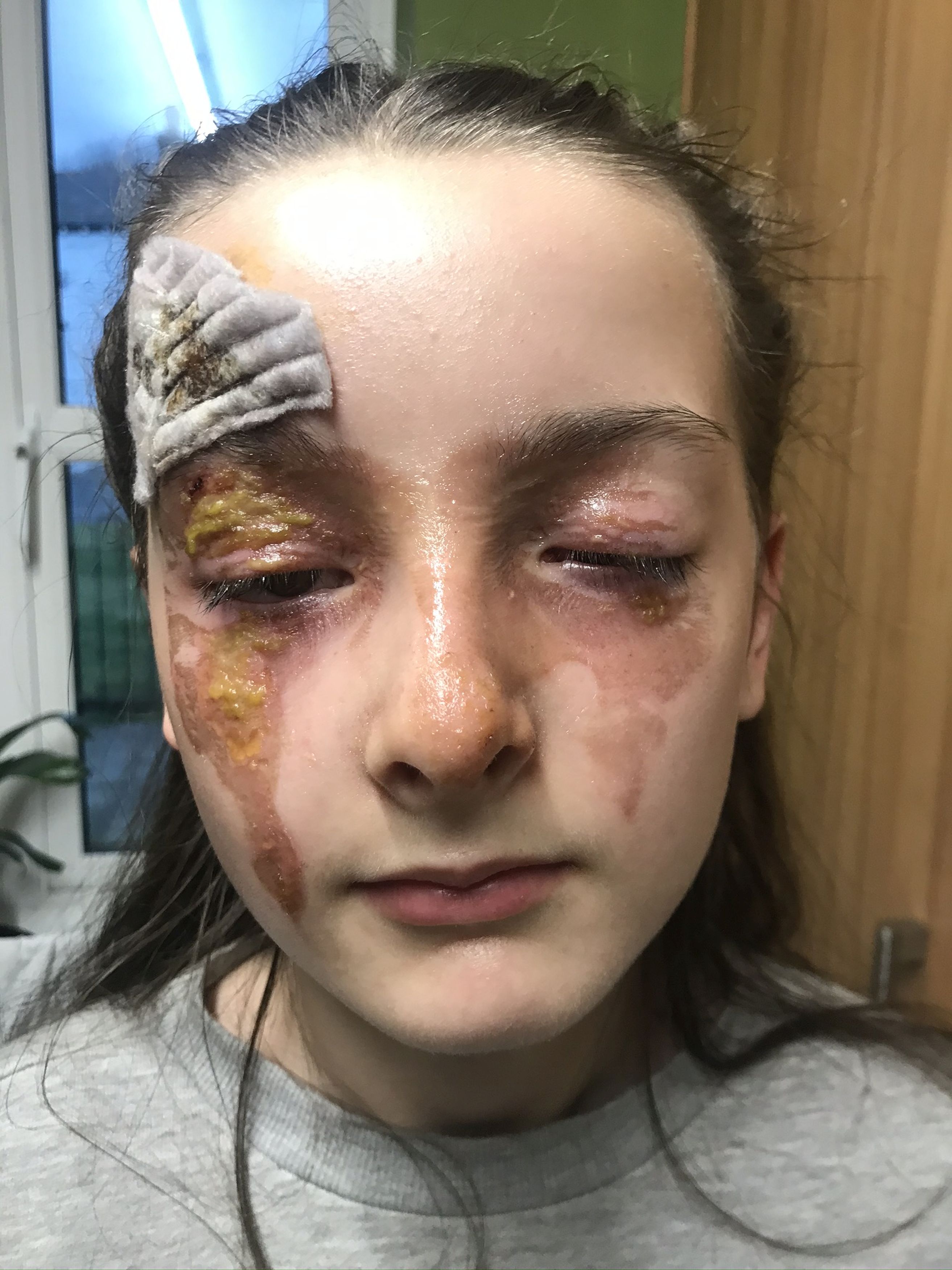 But when her fiance Michael Sale, 29, yelled for her to come take a look at 12-year-old Kadie's eyes, she knew something was seriously wrong.

While her mum was putting her one-year-old sister to bed, Kadie Law thought she'd whip herself up some poached eggs on toast using a hack she'd seen online.

"I learned how to do it from a recipe online and I've watched mum make them before." 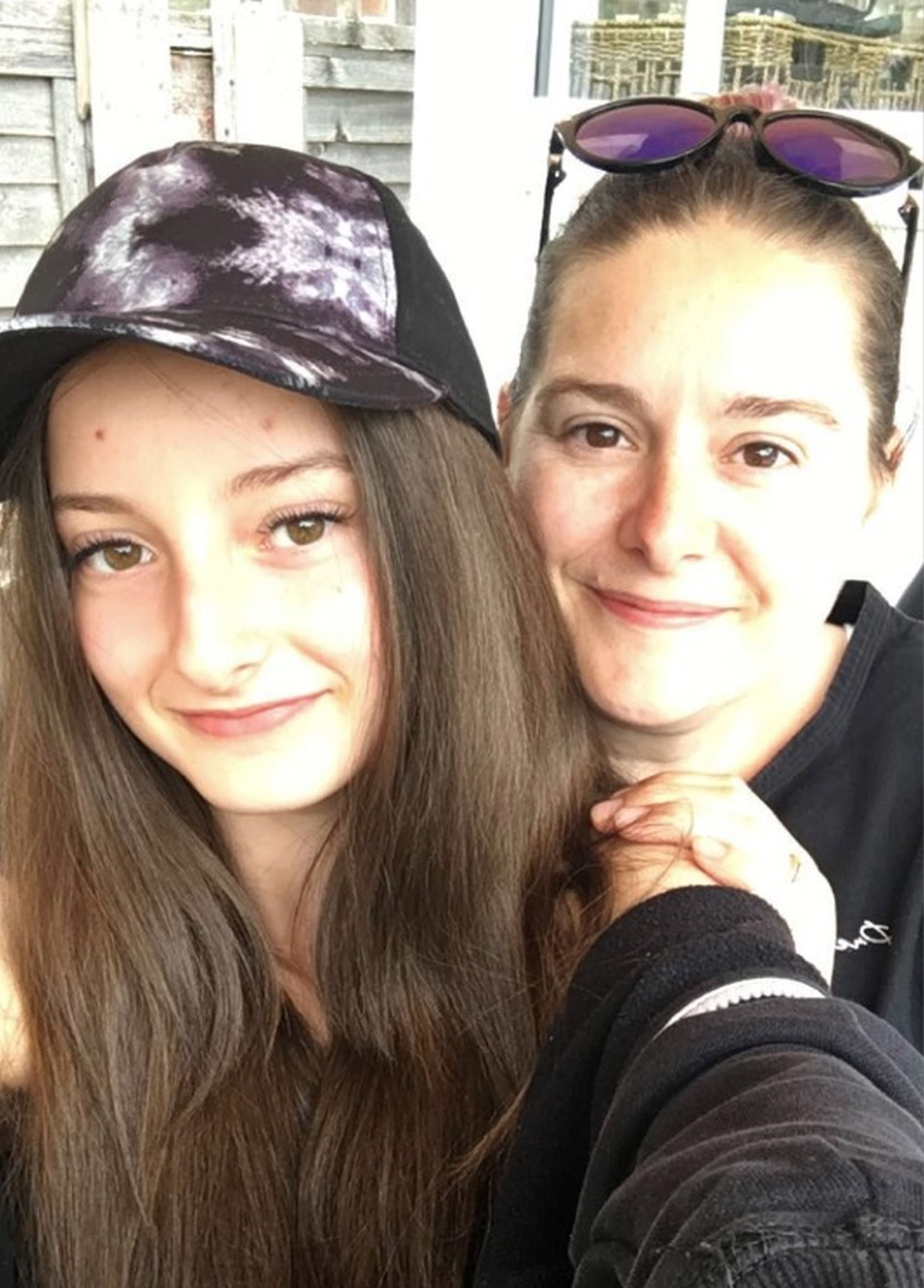 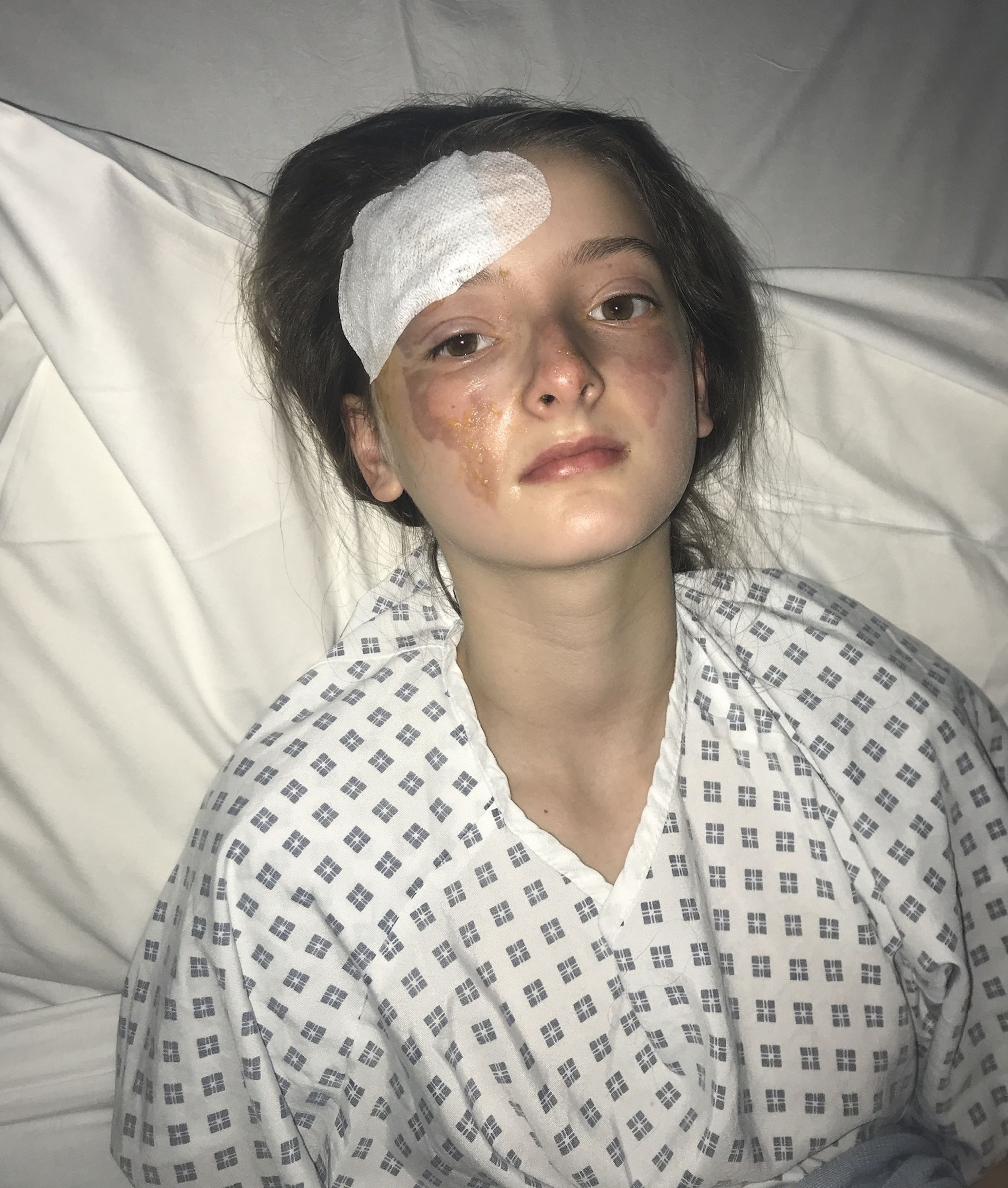 However, Kadie didn't realise that the microwave had been left on the highest setting when she put the egg in for 90 seconds.

After taking it out of the microwave, Kadie put the glass jug to the side and reached into a cupboard over it.

But as she was rummaging around for a bowl, it sprayed a jet of scalding water right into her face – leaving her with severe burns all over her eyelids, cheeks and nose.

"I got [the bowl] and I looked down and then it exploded in my face," Kadie explained. "The water was hotter than boiling point because it had been in the microwave after it had been boiled.

I'm lucky not to be blind. It's the most painful thing I've ever experienced

"I'm lucky not to be blind. It's the most painful thing I've ever experienced."

Luckily for Kadie, her fast-thinking future stepdad told her to run cool water over her face in the shower immediately afterwards.

The mum continued: "I had a look at her and I thought it didn't look too bad because it was very early on and she just look soaked [from the shower].

"When I turned her towards me I realised her forehead hadn't been under the water and I knew we'd have to go to Oldham Hospital.

"I left her under there for 40 minutes while I packed her a bag and wet a load of towels and blankets to take in the car where she lay with them on her face." 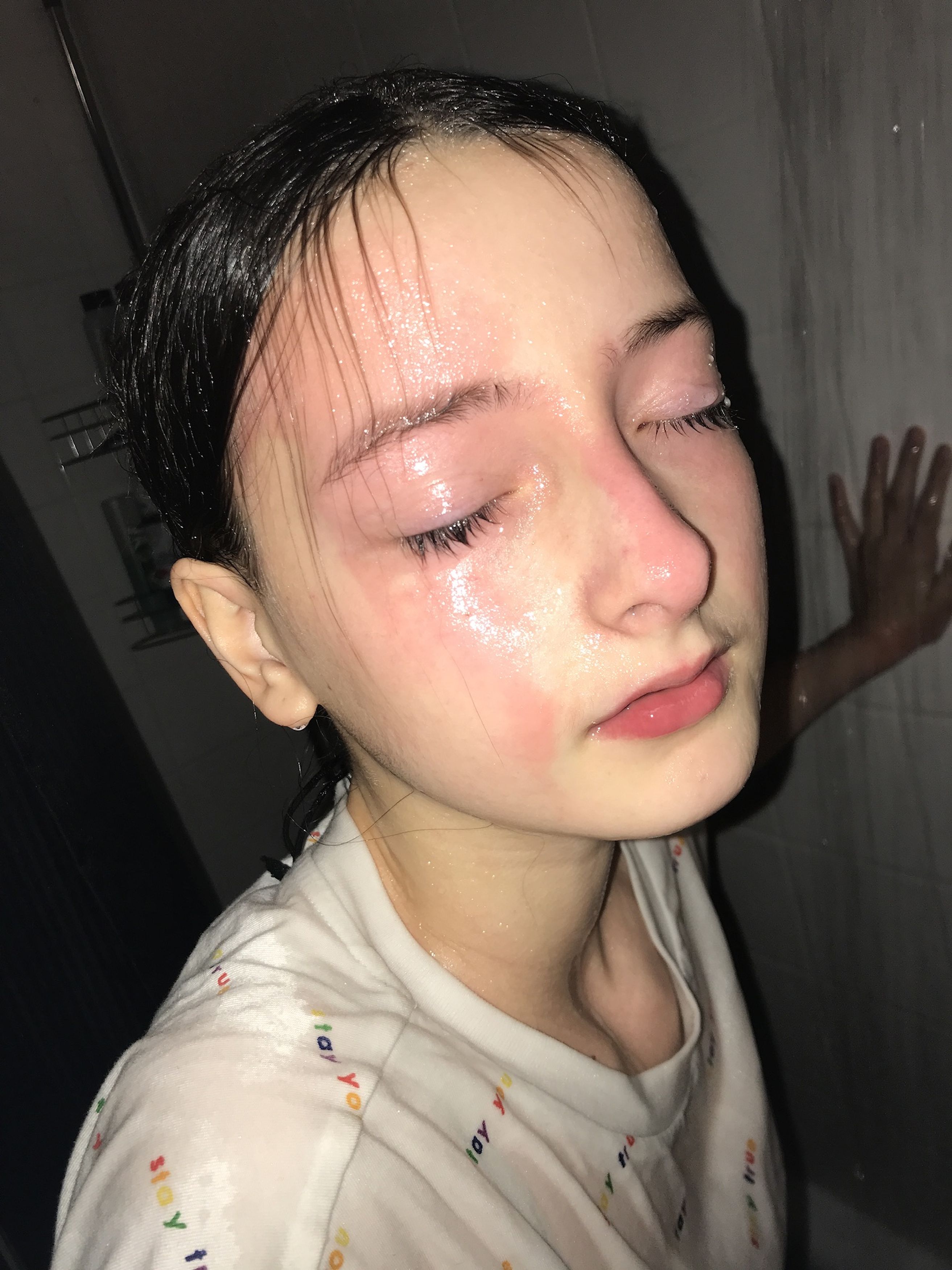 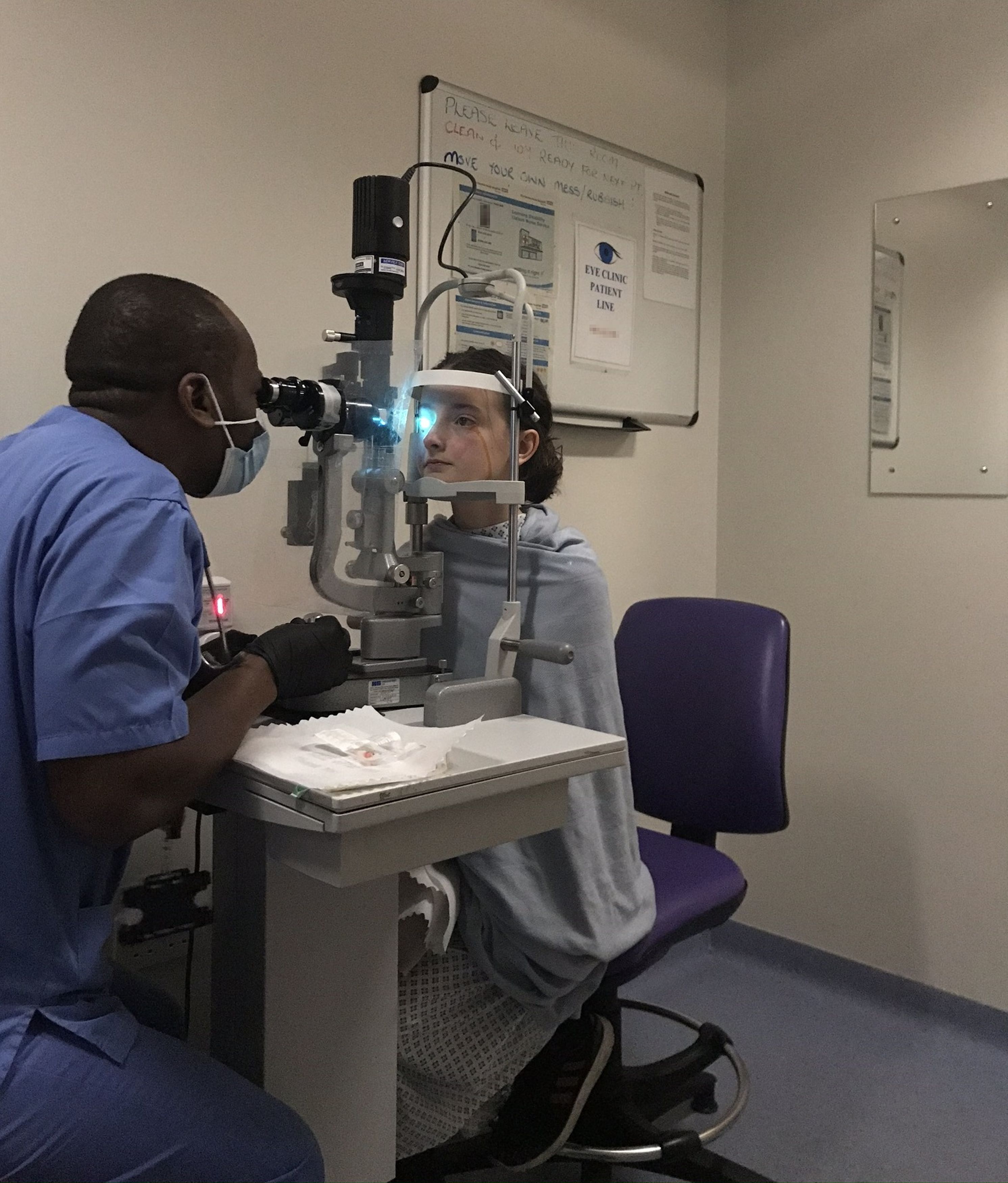 During the half-hour drive to the hospital, Kirsty says her daughter was surprisingly calm while she remained "frantic" with worry.

Kadie was originally admitted to Royal Oldham Hospital's A&E before being transferred to the children's burns unit at Royal Manchester Children's Hospital.

Kirsty said: "At A&E they grabbed Kadie and took her straight through.

"When you took the towel off you couldn't really tell the extent of it. You could just see her head was very blistered and the rest of her face was slightly red. 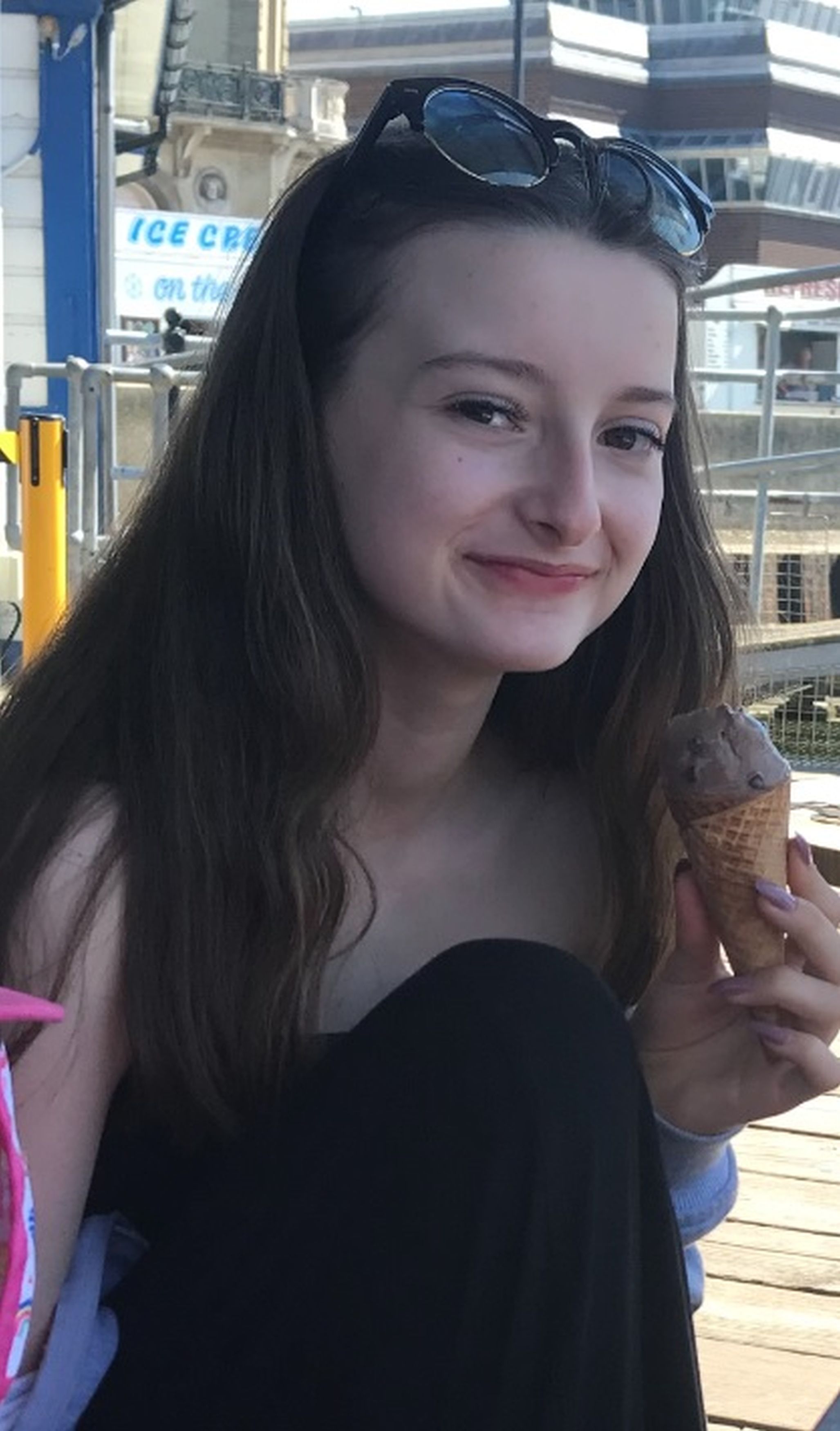 "They tested her eyes and they were very happy with them. She was very lucky that she managed to close her eyes just in time."

Once she was transferred, the top layer of skin from Kadie's burns were scraped off before applying olive oil to her scorched skin and placing a bandage on the worst section on her forehead.

Despite diligently applying the olive oil three times a day as instructed, Kadie's skin still became infected and she needed a seven-day course of antibiotics to clear it up.

Eight months on from the accident and Kadie has been advised not to leave the house between 11am and 4pm for the next two YEARS to avoid sunlight damaging her skin further. 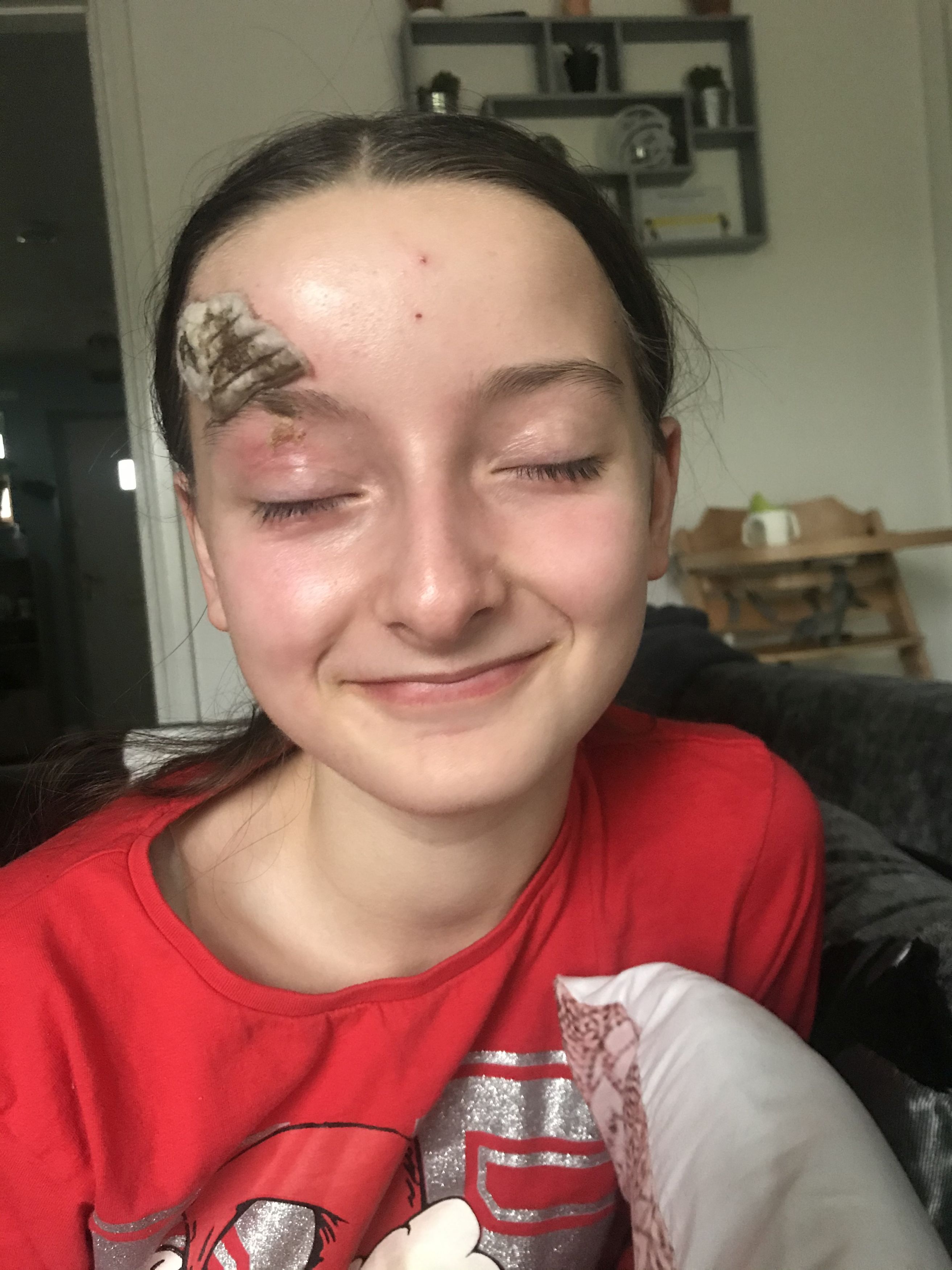 What's more, the pre-teen is not allowed to wear makeup either – something Kirsty says she absolutely loves.

The mum added: "She can't go out in the sun. For the next two years Kadie will need to wear factor 50 sun screen, has to wear a hat and she also has to put an emollient cream on twice a day. She is not supposed to go out between 11am and 4pm."

Now Kirsty is urging people against this egg cooking hack and wants Kadie's experience to raise awareness on treating burns.

She continued: "At that age you want to teach them independence.

"It was shocking to see something as simple as cooking an egg cause all that, you don't expect it at all.

"I would advise people to use a lower heat [setting] and not use boiling water.

"I think it's really important people know that going under cool water is the most important thing you can do for burns, and the longer the better.

"My advice is if you cook something in the microwave dont pull it out straight away, if you do put it somewhere away from you, don't put it anywhere near you."

For more real life stories, this teen went viral after sharing safety tips for women including always having men’s boots & when to never wear a ponytail.

And this woman vomited so much during pregnancy she had to have her teeth removed – she now has panic attacks & struggles to go out in public.

Plus this woman found basement dungeons in house listing in hilarious and terrifying TikTok video.