In 1975 Valentino Garavani, then the most feted couturier in Rome, moved his ready-to-wear show from Italy to Paris, the better to underscore his position as an equal of fashion’s luminaries rather than a lord of the outer regions.

This weekend his heir, Pierpaolo Piccioli, moved it back — or at least to Milan, the better to underscore his support for the first of the fashion capitals to fall to the pandemic, and especially the men and women of its factories and fabric mills whose livelihoods had been decimated. Also, the better for the safety of his staff.

In the raw space of a cavernous warehouse there, rather than the ornate 19th-century Hôtel Salomon de Rothschild in Paris, the floral artist Satoshi Kawamoto planted a garden of 34 different species of plants and flowers. In the midst of it all, the British musician Labrinth performed live. And around him strolled men and women (many cast off the street) in Mr. Piccioli’s many easy pieces: crisp lace-bibbed poplin shirts untucked over tailored shorts and under relaxed blazers; faded jeans (Levi’s 517s, reissued as a collaboration) paired with ruffled poet shirts; romantic chiffon schmattas in bright florals dripping ruffles — all designed for a world slouching toward rebirth. 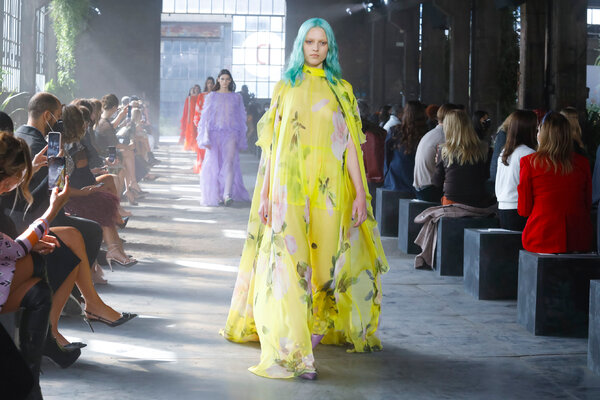 Still, like Valentino, fashion is trying to find its place. Everyone is trying to figure out what comes next, not just physically, but essentially. What is the role of design in a world that is, as Jeremy Scott said on a Zoom call before his Moschino show, “coming apart at the seams?” Where does it go from here?

In Milan, the answer for many designers seemed to be: back to normal as quickly as possible. But really — normal? Does anyone actually know what that is anymore?

Of course not. Which points up the problem with trying to create it. You revert to the old normal, as opposed to anything new.

So if in New York, the shows were almost entirely digital, and in London, reimagined as intimate, local presentations, in Italy a significant number were live, in-person catwalks, featuring mask-less models strutting out in the usual expressionless stream, often in front of a socially distanced audience, and actual trends that coalesced by the end.

Apparently, designers forgot that during lockdown, one of the first things to go was the bra. And that, in any case, this wasn’t exactly back-to-work wear, even if only half the staff is in at a time.

You can see that as a defiant shout of optimism in the face of a doom-saying world — and it is unquestionably admirable that the industry pulled together enough to have a fashion week at all — or an ersatz pretense that everything is going to be just fine, and we’ll get back to where we were.

And maybe that proposal was more convincing if you were actually there, runway-side in the fashion bubble, rather than watching through a computer (as I was), surrounded by the screeching white noise of the rest of the world. But if you were on a screen, as most customers would be, it was hard not to think that what you were seeing were well-meant relics of a former world.

(Giorgio Armani cleverly evaded the issue entirely by christening his collection “timeless” and showing a symphony of signature greige pieces that were exactly that.)

At least in her Versace show, Donatella Versace acknowledged the situation by seating her staff members instead of an audience, and then posting a sign at the end of the show noting they had all been tested for Covid. In a chat that preceded the livestream, she talked about “dreaming of a new world” and “what has changed inside all of us” and “disruption.”

Then she built a set to mimic a drowned Atlantis, complete with broken Roman statuary, fallen columns, sand and a digital seascape playing on the walls, before sending out a parade of men’s and women’s wear in undulating Fortuny pleats, rainbow fish colors and Trésor de la Mer archive prints. There were rashguards atop skirts dripping in coral ruffles, and beaded star fish and clam shells on siren slips. There was even a digital octopus named Churro, who made a guest appearance at the end.

The idea being something like gods and goddesses of the deep emerging into the light of a fresh dawn — laudable in concept (as was the notably diverse choice of models), though the irony of using an old sea creature print to illustrate the future seems to have escaped her.

For real relevance, fashion has to grapple a little more creatively, and directly, with the actual grimness at hand. Some designers tried. 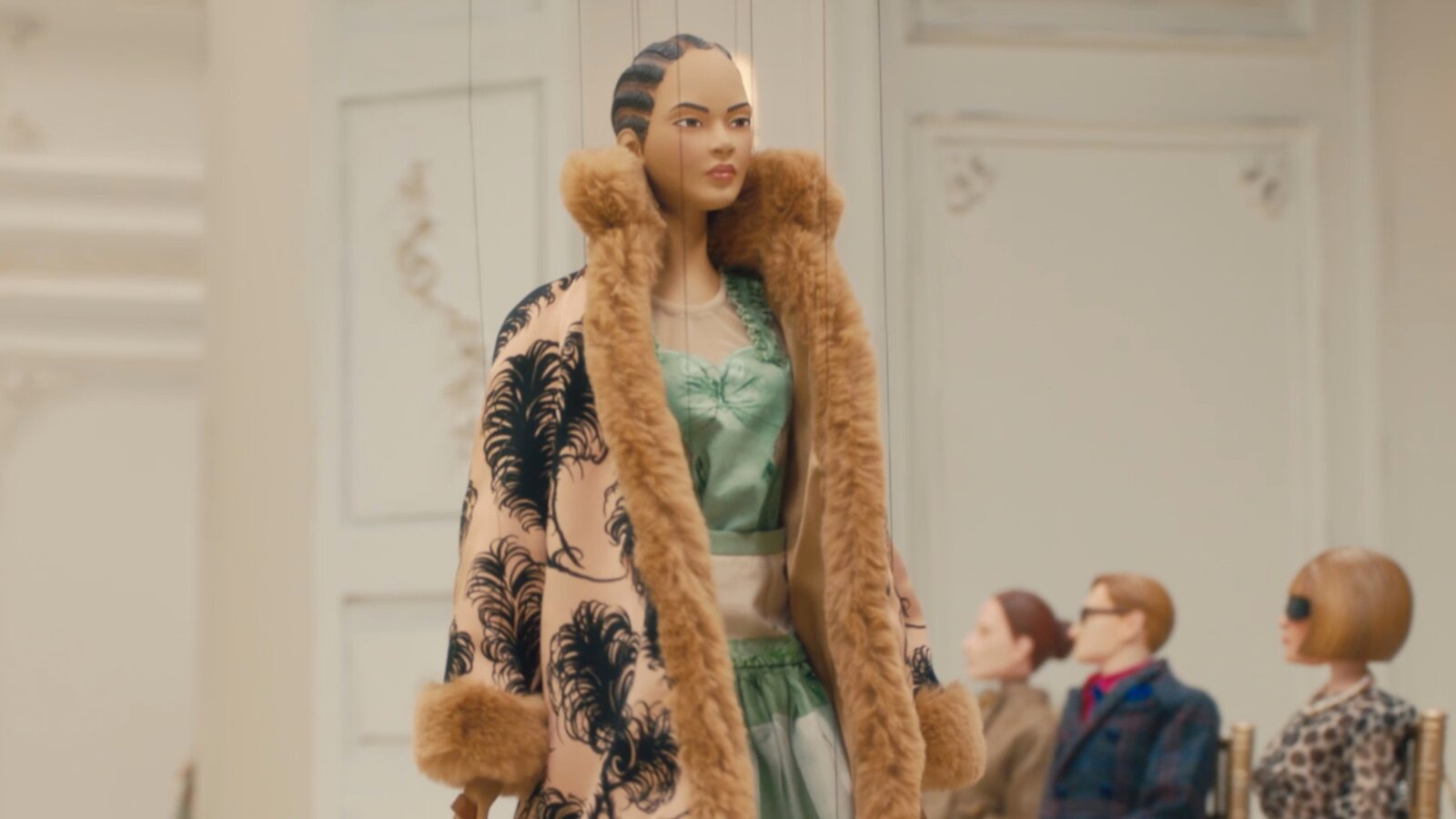 At Moschino, for example, Mr. Scott eschewed a live runway for a filmed marionette show, creating a catwalk with mannequins based on real-life models, gold ballroom chairs and a faux front row populated by carefully groomed magazine editors — and yours truly — the better to provide some perspective. Created by Jim Henson’s Creature Shop (home of the Muppets), and dressed in scaled-down replicas of a collection Mr. Scott began designing in March, the marionettes were not so much a way to talk about the fashion world as a place of master puppeteers (though that is more than plausible), but rather a way to focus attention on the importance of the human hand behind it all.

It was hands, after all, that pulled the strings of the “models.” Hands that built the garments, most of which referenced classic couture tropes but revealed the work and structure inside: the boning of corsetry, the tulle underskirts, the linings of trousers and horsehair stuffing of suiting. And while playing guess-the-model was a fun game, the clothes were an even more pointed reminder of what binds us together, literally, underneath it all.

As Francesco Risso’s Marnifesto went: “Let’s not get back to normal; let’s refashion the ‘model,’ the ‘runway,’ the ‘venue’ and the ‘show.’” At Marni, he did.

He sent different looks made from familiar styles that had been de- and reassembled, graffiti’d over, cut, tied, floral-splashed and otherwise roughly reconceived to a wide group of friends around the world. And he had them document wearing the clothes while going about their lives: getting dressed, heading to bars, taking the bus. In fancy A-line skirts and crop tops; coats scrawled with poetry and aphorisms; bright, rugby striped knits; all of it a sort of explosion of gritty glamour. Then he spliced it all together and let it run.

It was messy and sometimes irritating and much too long but also ultimately fascinating, because it showed fashion taking part in real life; showed that it wasn’t limited to fantasy, and didn’t have to be reinterpreted as sweatpants.

There has been a lot of talk this season about the idea that clothes are there to make you joyful, and that that’s all the justification fashion needs to continue to exist, because everyone needs joy. It’s a valid argument. But Mr. Risso suggested that clothes can also do something else: give you strength to get through the day. Help drive you forward.

To do so, he’d ripped them all up, literally, and started again. That’s kind of where we are now, really.