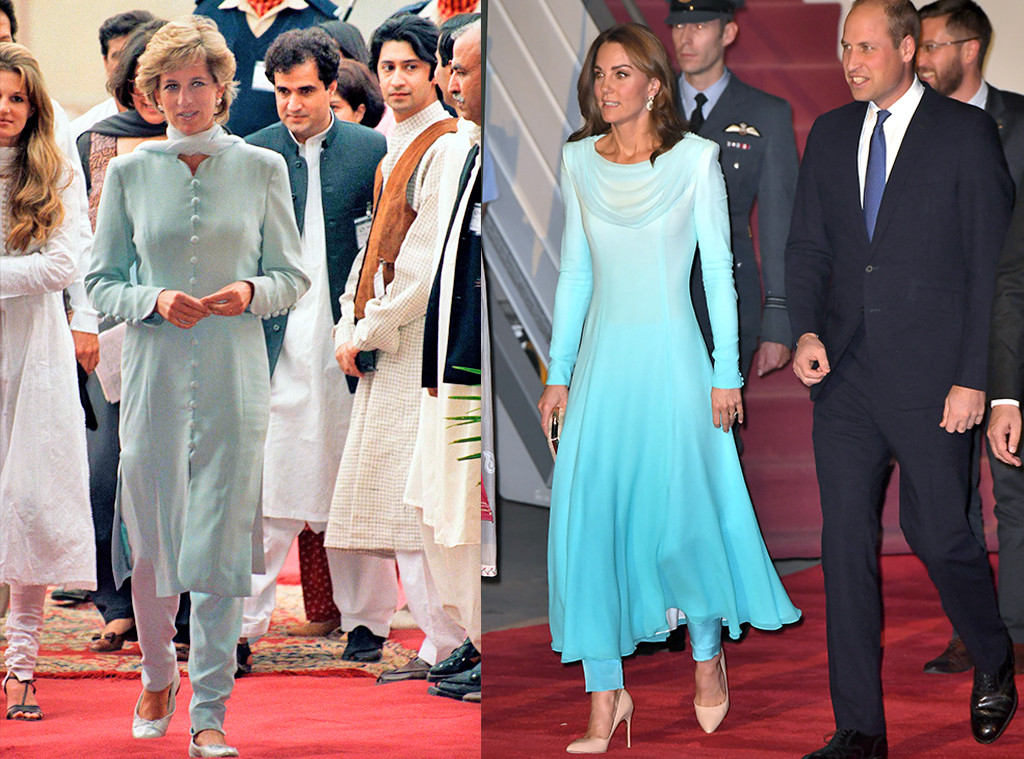 Prince William and Kate Middleton kicked off their five-day tour of Pakistan on Monday.

The couple was greeted by Pakistan foreign minister Shah Mehmood Qureshi at the Pakistani Air Force base in Rawalpindi, near Islamabad, where Kate was photographed wearing a stunning blue ensemble by Catherine Walker.

For her first look, Kate put a fun twist on the traditional dress with an ombre, cowl neck gown and trousers. She paired the look with some nude Rupert Sanderson heels, a matching clutch and a pair of beaded chandelier earrings, both of which are from women’s wear brand ZEEN.

Her outfit bears a striking resemblance to the dress that Princess Diana wore during her 1996 visit to Pakistan. The late royal also opted for trousers under her gown, which was a similar shade of blue and featured several stylish buttons. Princess Diana, however, donned matching blue flats and accessorized her outfit with a delicate scarf.

Another sweet coincidence—Catherine Walker was one of the Princess of Wales favorite designers!

The Palace has yet to reveal the Duke and Duchess of Cambridge’s exact itinerary, but the royal duo will be traveling to various locations during their visit. Several security concerns and rising political tensions make this the couple’s “most complex” tour yet, according to a royal insider, but William and Kate are still keeping a positive outlook as they explore Pakistan.

Their tour strives to improve relationships between the U.K. and Pakistan and they’re expected to meet with several government leaders. They will also be attending programs that are education-focused.

“Throughout the tour, Their Royal Highnesses will visit programs which empower young people, and organizations that help ensure they have the best possible start in life,” the Palace said in a statement. “Access to quality education, particularly to girls and young women is one of the UK’s top priorities in Pakistan. The Duke and Duchess are looking forward to spending time meeting young Pakistanis, and hearing more about their aspirations for the future.”