Carl Lentz, the pastor who baptized Justin Bieber in a professional basketball player's bathtub, appeared wearing a pair of Nike Air Fear of God sneakers that were selling online for about $500.

Then John Gray, a pastor from South Carolina, was shown in blood-red Air Yeezy 2s, the sneakers made in collaboration with Kanye West, that were going for upward of $5,000. 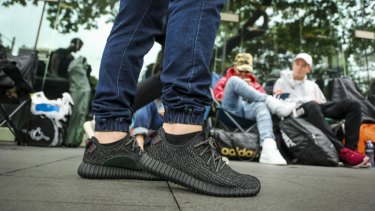 Designer sneakers such as Kanye West’s YEEZY line are so in demand, people queue for them. But is it against the Bible’s teachings for preachers to wear posh sneakers?Credit:Anna Kucera

The pastors were among those included on an Instagram account that recently popped up called "PreachersNSneakers," where men and women of God are shown wearing footwear that could cost more than a month's rent for many of their followers. Before long, each post was clogged with hundreds of comments.

As the Instagram page (see below) has become popular, quickly amassing well more than 100,000 followers since the first post appeared about a month ago, the photos have led to soul-searching over what some see as an undercurrent of materialism that has been getting uncomfortable attention. The exchange has grown beyond simply criticizing the pastors, as many young Christians were nudged to wrestle over how they present themselves to the world and how it squares with the faith's teachings.

"I don't think it lines up with who Jesus was," said Jamie Tworkowski, founder of To Write Love On Her Arms, a nonprofit that helps people struggling with addiction and depression. "That is a status symbol," he said of one pastor who was wearing Gucci. "That is vanity."

The pastors, who have enormous followings through their churches and on social media, have thrived by attracting millennials and others who have turned away from more traditional worship. They have succeeded in part by creating an environment that is less formal and more relatable. These pastors have traded a suit and tie for a leather jacket and cool sneakers in order to create the kind of branding that resonates with younger churchgoers.

In a telephone interview, calling from an unlisted number and introducing himself as PreachersNSneakers, the man who created the account described himself as a 29-year-old graduate student living in Texas and working in technology. He said he is both a follower of sneaker culture and an observant Christian (who tithes to his church).

One day he was watching videos of Christian musicians performing on YouTube, he said, and noticed one of them was wearing a pair of Yeezy Boost 750s, which are priced in some online resell markets at around $700. He went into a rabbit hole, finding other prominent pastors and worship musicians in expensive sneakers, prompting him to start the account.

"Initially, I felt very justified in the stuff I was posting and seeing," he said.

The controversy resulting from the Instagram posts started off like any other social media flame war. Yet the exchanges soon morphed into something far different: a nuanced and at times challenging conversation that was carried out in social media posts and discussed at length in podcasts. At a recent Christian hip-hop concert, performers were discussing it backstage.

Instead of digging in his heels, the account's creator found his opinions shifting.

"This is a pretty slippery slope to be judging people's hearts behind how they spend," he said, recounting a conversation with a mentor who reached out to him. "You should really consider looking at yourself in the mirror and how you're spending your money."

The pastors have contributed little to the conversation. They have talked about it privately and reached out to the person behind the account, who said he was told by the pastors that shoes and clothes are often given to them. Others on Instagram defended them, arguing that the account aimed to sow discord and pillory the pastors.

Most of the pastors declined to be interviewed or did not respond to messages, including Veach, who leads Zoe Church in Southern California, and Lentz, the senior pastor at the New York campus of global megachurch Hillsong. But celebrity website TMZ recently chased down Lentz at Los Angeles International Airport while he was wearing Air Jordans. "I do have cool shoes," he told the interviewer.

"These are grown people," he added, referring to the pastors. "They have the right to spend their money in a way they're comfortable with."

Gray, the senior pastor at Relentless Church in Greenville, South Carolina, was also among the first to publicly join the conversation.

"I don't think you can judge a man's heart based on their attire," Gray said. "What a person wears doesn't determine what their value system is."

But just as his sneakers might draw scorn, he believes they can also help him build a rapport with people who might not be inclined to go to church. "There are very few entry points for millennials to come in and feel welcome," he said.

The pastors hold an unusual position. They fill megachurches, appear on television and minister to pop stars and athletes. But they're not quite celebrities. Some argue they make for an easy target.

The debate pokes at what has long been a tender subject: the money flowing through churches and the way that it's spent.

"We treat them like we treat any other celebrity," hip-hop artist Propaganda said, "but they're held to a different moral standard because they're pastors."

The debate pokes at what has long been a tender subject: the money flowing through churches and the way that it's spent, as well as the encroachment of materialism. Some ministries have been criticized for buying mansions for pastors or in one case, spending $65 million on a Gulfstream jet.

"I just feel like if you're struggling to pay for rent or your next meal," Tworkowski said, "that sends an incredibly confusing and maybe even offensive message that is not necessary and possibly distracting."

Sneakers appear to be just the newest iteration in how fashion has influenced religious expression.

Whether in the form of ornate vestments, boxy three-piece suits or head coverings, such choices have been used to indicate a respect and closeness to the divine. The sartorial traditions of the Roman Catholic Church were so rich they inspired a blockbuster exhibit in 2018 at the Costume Institute of the Metropolitan Museum of Art and were the theme of that year's Met Gala.

"You could think about it this way: They're making sneakers a liturgical garment," said Anthea Butler, an associate professor of religious studies at the University of Pennsylvania.

In Gray's case, he said the red Yeezys in the post were a gift from the company that produces his and his wife's television show that he received after it was renewed for more episodes. He said clothing designers and NBA players have given him shoes, and he remembers his mother buying his first pair of Jordans; it was 1985 and they cost $63.

"To say that it's not hurtful would be untrue," Gray added, referring to the criticism. "All I can do is share my heart, and let that be what it is."

The creator of the account said he was well aware of the emotional response the posts have stirred and that he was troubled by those who were attacking the pastors.

"I want people to know my heart is pure behind this," he said. "I'm not trying to cause division or anger or distaste about the church or Christianity. But I have enjoyed the conversation surrounding this, and that's been fulfilling for me."

And in the way of disclosure, he acknowledged that he wears sneakers that some might see as too expensive and unnecessary. He has a pair of watermelon-colored Nike Air Max 1s that cost $110. And he has all-white Adidas UltraBoosts, which have a retail price of nearly $200, but that he said he bought on sale.