Last Thursday, at Nightingale Plaza, a trendy club in West Hollywood, fans of Megan Thee Stallion wore sashes bearing the phrase “Cognac Queen” (the title of one of her songs) and waited for the rapper to arrive for the night’s event: a pageant of sorts. Though rap may be a male-dominated arena where women are pitted against each other for an imaginary single top stop, tonight was all about showing fierce support.

“I want to show other girls how happy I am and how confident I am, how I still want to go to school and I still want to rap,” the 24-year-old artist said earlier that night in a hotel suite, where her makeup artist and hair stylist were getting her ready for the event. “I just want to be like a good example to somebody in the future.”

In ninth grade, when she was better known by her given name, Megan Pete, the rapper was crowned Miss Pearland, after the small city south of Houston where she went to high school. It was her first and last time competing for a crown. “It wasn’t something my heart was in,” she said. 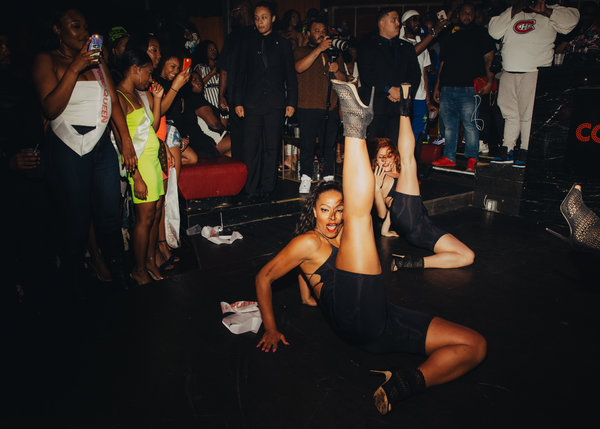 “Houston is a place where you have to be the best,” she continued. “Everybody gotta be flashy, flashy. It’s not like a gaudy thing, but people definitely put on their best dressed even if they go into Wal-Mart.”

That night, the rapper — who now takes online courses at Texas Southern University, since her travel schedule doesn’t allow her to be on campus any longer — would award a $2,500 scholarship to the winning contestant.

“I just thought it would have been a good thing to do because I know that tuition ain’t no joke,” she said. “So if I could do something to help somebody else, then I thought that would be nice.”

When she was growing up, Megan Thee Stallion watched her mother pursue a rap career under the name Holly-Wood. It wasn’t until she was in college that she disclosed her own desire to rap. (In March, her mother died after a brain tumor was discovered.)

She rose to local fame through a series of cyphers, or freestyle rap battles, while attending college. Her video “STALLI FREESTYLE” is often cited as the song that introduced her to the rest of the world. This year, she appears on the cover of XXL’s annual Freshman Class issue, a stamp of approval in the music industry, alongside DaBaby, Rico Nasty, Tierra Whack and Blueface.

Being from the South, Megan Thee Stallion is often mentioned in the context of the “yee-haw agenda” encapsulated in images of black cowboys and cowgirls. She grew up going to rodeos, where leather haps and fringe jackets were part of the culture.

“The first time I ever put on a cowboy hat for a video a lot of people on my team was like, ‘Are you sure? You know, we don’t want people we think we country,’” she said.

So far, the rapper has thrown five gatherings across the country, inviting her “hotties” to “drive the boat,” or drink socially with her. “I came up with it,” she said. “It’s my little slogan.”

In early June, hundreds of people showed up to the Santa Monica Pier for a “hottie beach cleanup” that she organized. The rapper said the idea was prompted by a question about climate change on Twitter. Asked whether she considers herself an activist, she said, “I don’t want to put no title on nothing, I just live like this.”

The idea for the pageant came about during a discussion with Rayna Bass, the senior vice president of marketing at 300 Entertainment, one of the record labels with which Megan Thee Stallion has signed. Ms. Bass asked her if she was going to throw another “hottie party” in the lead-up to the BET Awards. Instead, she threw a different kind of celebration.

At midnight, Megan Thee Stallion, who developed her stage presence at a young age on hip-hop, jazz and ballet teams, finally appeared. Over the span of three days, more than 2,000 people submitted a form on the rapper’s site asking them to explain why they’re a “Cognac Queen.”

The rapper said all genders applied. “I was trying to get a hot boy in there, but I don’t think he responded in time,” she said.

The pageant started with each contestant explaining their submission.

“Not only do I represent perseverance and standing up for myself, but I can turn up, whenever,” said Tiera Holmes, 23, who is pursuing a master’s in psychology at the University of Texas at Arlington.

Annjanae Gonzales, 27, who is pursuing a master’s of public health at California State University in Los Angeles, was the last to walk onstage.

The rapper passed a bottle of D’Usse to the two remaining contestants — Ms. Holmes and Ms. McClintock — and helped them “drive the boat,” which in this case meant tipping their heads back and pouring alcohol into their mouths.

The audience helped choose the winner through cheers and applause, the loudest applause came for Ms. Holmes.

“I dropped everything that I was doing,” said Ms. Holmes, the winner, who had never left the South before. “This is my first time getting on an airplane. I was scared, but I did it, and I won, and I’m so excited.”