Nickie Murtagh, 34, had to have a ping-pong ball-sized piece of scalp cut out in order to get rid of the disease. 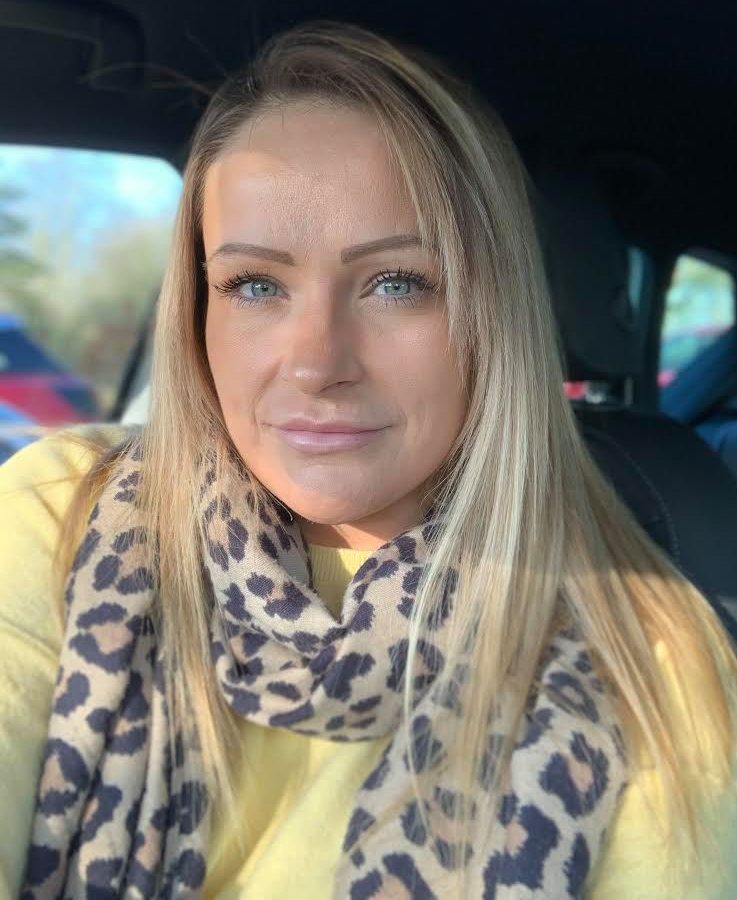 Doctors initially told the childminder, from New Malden, Surrey, it was "just a cyst" and she'd have to pay to have it removed.

But after begging them for more tests she was eventually diagnosed with basal cell carcinoma – a non-melanoma skin cancer.

Nickie told Sun Online: “I’m not a sun-worshipper, but when I was on holiday I’d sit outside on a lounger and read a book.

"Until recently, I usually forgot to wear sun cream, or didn’t apply it often enough. And I was too vain to wear hats because they didn’t suit me and left my hair all mussed up.” 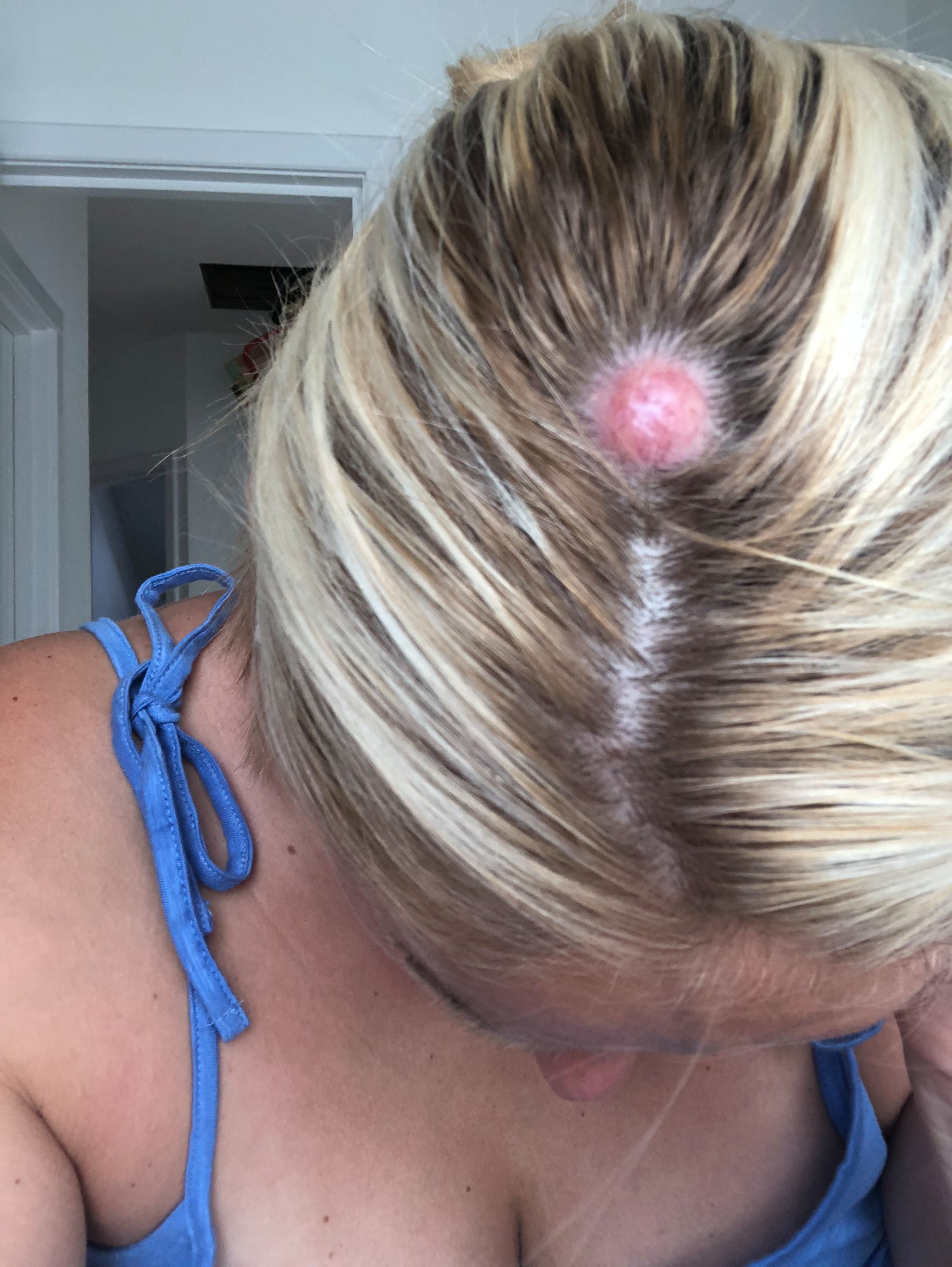 The 'cyst' on top of Nickie's head before surgery 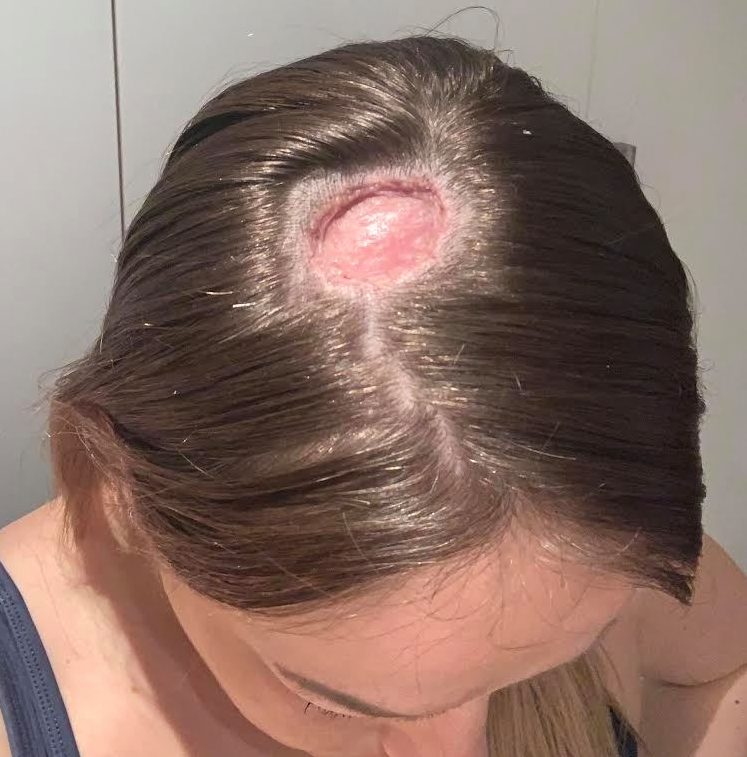 In 2016, Nickie noticed a bald patch the size of a little fingernail along the exposed parting in her blonde hair.

She said: “I’ve parted my hair on that side, for many years now.

"At first I didn’t think too much about it. It looked like some very mild alopecia. But then I felt a tiny lump pushing its way up from my scalp.

“I booked an appointment with my GP, and was told I had a small cyst that was nothing to worry about, and could safely remain untreated.

This time the doctor took one look at my 'cyst' and told me straight away, 'That looks like a skin cancer'. My blood ran cold

"But over the next two years, it continued slowly growing. Eventually it was the size of a one pence coin.

“Other people – the children in particular – were starting to notice it and make comments.

"My family and friends urged me to go back to the doctor’s and get it checked out. I was starting to feel extremely self-conscious."

In April last year, she went back to see her GP but was told once again it was just a cyst and it was considered cosmetic. 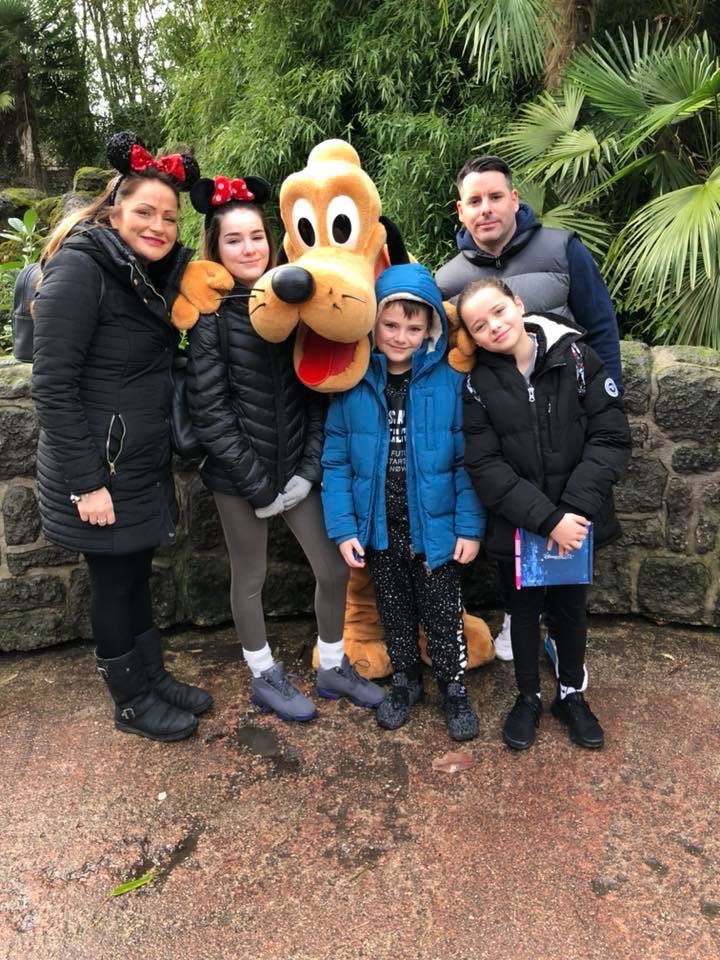 Nickie continued: "The doctor said if I wanted it taken off, in order to look better, then I’d have to pay to have it removed privately.

“But that didn't feel right to me. I was sure there was something more going on.”
She insisted on an NHS referral and her doctor grudgingly agreed.

In May 2018, at Surbiton Health Clinic, she saw a specialist dermatology GP – and her fears were confirmed.

Nickie said: “This time the doctor took one look at my 'cyst' and told me straight away, 'That looks like a skin cancer'. My blood ran cold."

She had a biopsy taken there and then but endured a long seven weeks before the test results were back on July 13, 2018.

She said: “I was given three options. Radiotherapy treatment; two-stage surgery to take away half of the cancer in two separate ops, meaning I wouldn't need a skin graft; or surgery to remove the whole lump and some skin around it to ensure all affected tissue had been taken away.

What is a basal cell carcinoma?

The commonest cause is exposure to ultraviolet (UV) light from the sun or from sunbeds. BCCs can occur anywhere on the body, but are most common on areas that are exposed to the sun such as your face, head, neck and ears. It is also possible for a BCC to develop in a longstanding scar. BCCs are not infectious.

BCCs mainly affect fair skinned adults, but other skin types are also at risk. Those with the highest risk of developing a basal cell carcinoma are:

“At that stage I was extremely fearful. All I could think was, just get this out of my body. So I chose to have the tumour removed in one operation, as soon as possible.

"I’ve lost friends to cancer and I didn’t want that to happen to me.”

It wasn’t until December 13, last year, that she underwent surgery – by then the tumour measured 1.5 centimetres across.

Nickie said: “The operation was at Kingston Hospital. I was given only a local anaesthetic, so I was awake, throughout the two-hour procedure.

“It was pretty stressful and frightening.

"First I could feel the surgeon pulling and yanking at my head as a piece of my scalp, three centimetres across, was cut away. Then a skin graft was taken from my thigh.

“Afterwards, I was left with felt like a sizeable crater on my head. 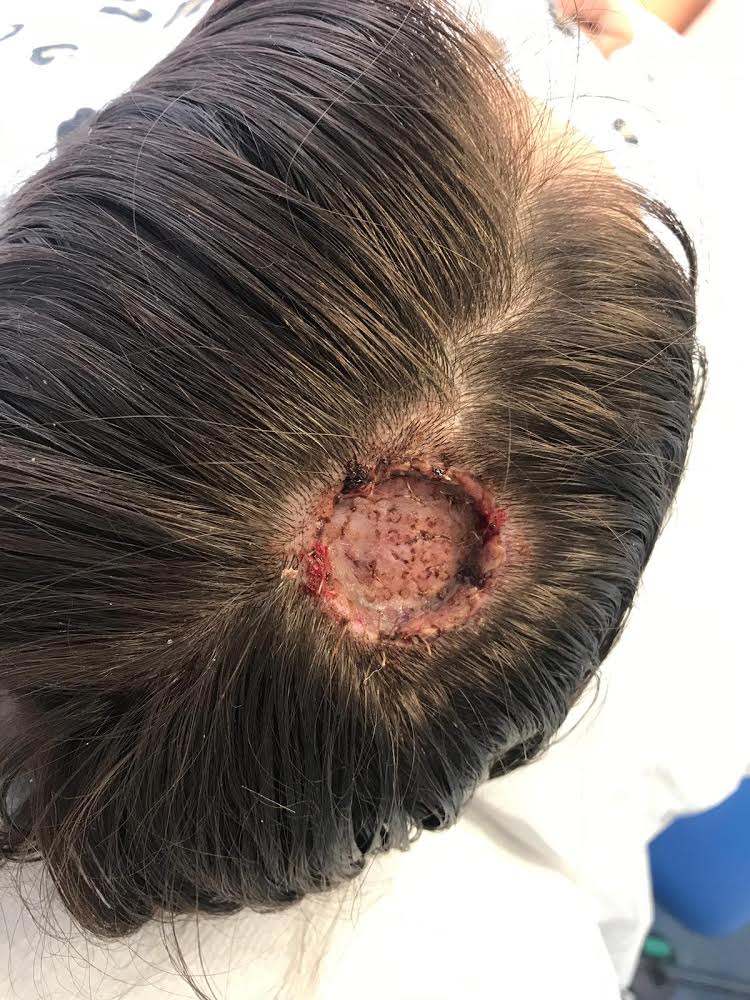 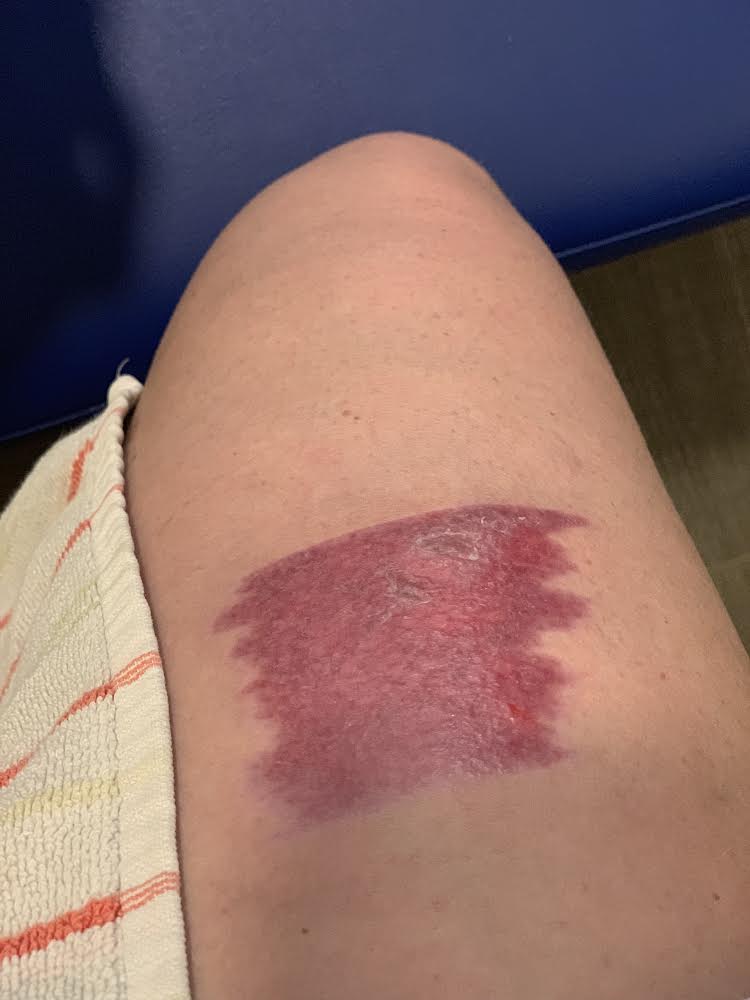 "When I held up my phone and took a picture, so I could see what it looked like, I was shocked by how much of my scalp had been removed.

“Then the hole was packed with the tissue from my leg and a dressing was applied while it healed.

“But thankfully it was good news was, when the tissue was examined, it was clear of cancer.

"The surgeon had been able to remove the entire tumour, so I wouldn’t need any more treatment.”

Over the next weeks, Nickie recovered but she began to feel low while the pain from the skin graft worsened and eventually became infected.

She said: “I kept thinking, am I going to die? Am I going to be one of those patients whose cancer spreads?

"Half of me felt I was thinking like a crazy person, and the other half felt my body had become a ticking time bomb.

"I didn’t know how I was supposed to feel, how I was allowed to feel. 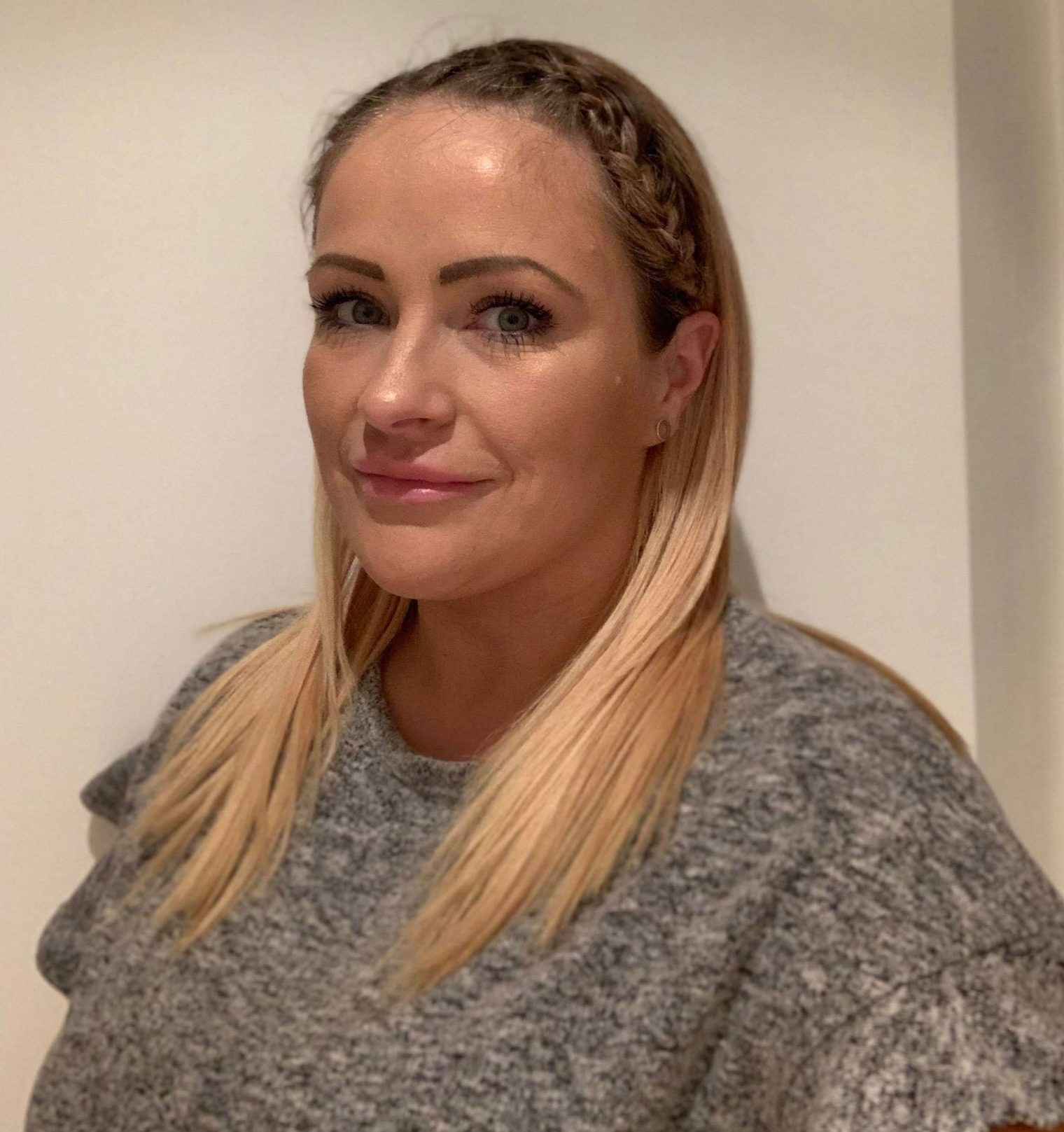 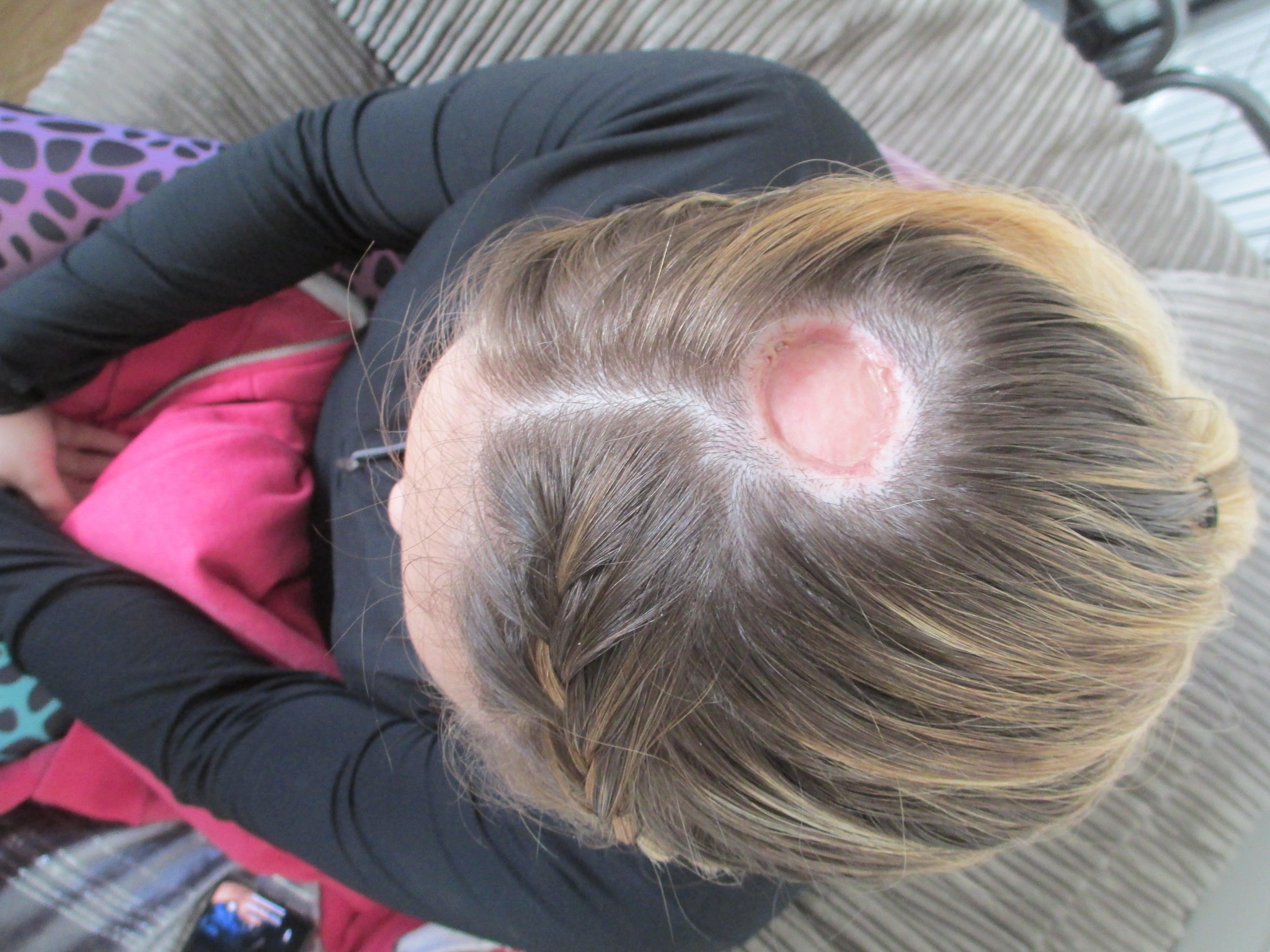 “There were some days when I felt quite depressed. I stopped looking after myself – craved wine and chocolate and comfort foods. I hid away on my sofa under a blanket, for a little while.”

After three weeks off work, the staples had been removed and Nickie was once again well enough to resume her job at the nursery.

She said: “The children are very perceptive and they all noticed the wound. A couple of them came up to me with sellotape, offering to fix my broken head!”

Nickie is being monitored every six months, but she has been warned that after one basal cell carcinoma, the re-occurrence rate is high.

She has been offered plastic surgery to make the hole on her scalp less noticeable, but at the moment, she says she can’t face any further operations.

The children are very perceptive and they all noticed the wound. A couple of them came up to me with sellotape, offering to fix my broken head!

Now she is looking to raise awareness and make sure others don't have to go through what she did.

She said: “I want to tell everyone – parents in particular – about the importance of protecting themselves from the sun, not just their children.

"Mums like me always look after everyone else, but they may fail to take care of themselves.

“I knew all about being safe from the sun. But my failure to apply that knowledge to myself, has left me with a hole in my head and scarring to my leg.

“There is such a lot of skin cancer about. Since what happened to me, three friends who also had little lumps have gone to their GPs.

"Two had small growths removed, and one of those tested positive for basal cell carcinoma.

In April 2019, Nickie will be running in the London Marathon to raise money for the World Cancer Research Fund. She hopes to raise £2,200.

“We all need to be sun and skin aware and adults must take as much care as children.

“From now on I will always fear the sun. I want to shout from the rooftops the damage it has done to my skin – and my mental health. The scars aren’t just on the outside.”