A PLANE passenger was left horrified after she sneakily read the woman in front’s messages – but others have accused her of being nosy.

Taking to Reddit, the user shared a snap of her fellow passenger’s texts, in which she appears to reveal a rather shocking confession. 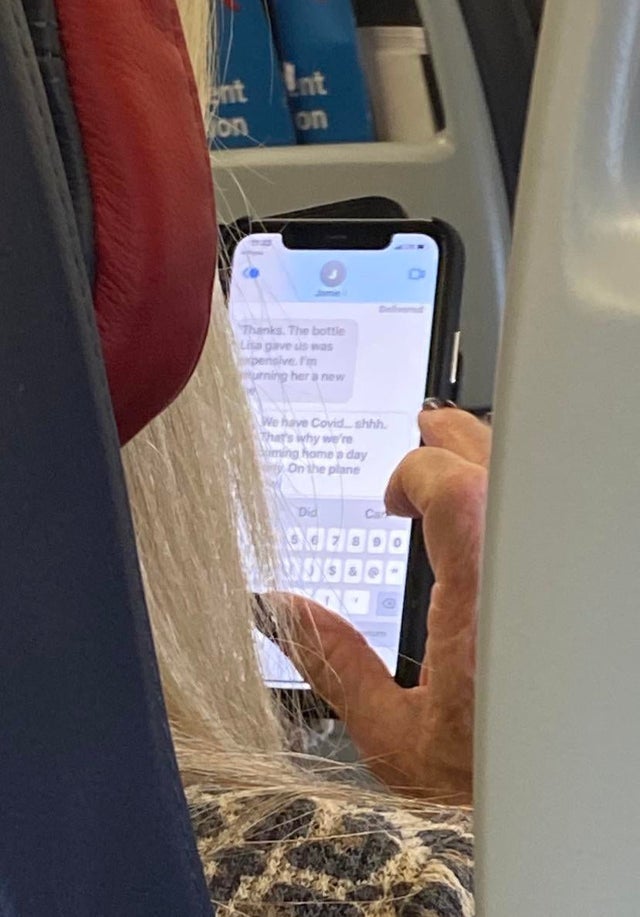 After receiving a message from a pal named James, the woman replies: “We have COVID… shhh.

“That’s why we’re returning home a day early, on the plane now.”

Sharing the photo, the passenger behind captioned the post: “Is this even legal?’

However, her post received a mixed response, and while some were equally outraged, others accused her of being ‘nosy' or even a hoax.

Commenting on the thread, one wrote: “She only typed that because she knows the a**hole behind her is reading her messages.”

“Going to have this on my phone next time I fly for the peekers lol,” agreed another.

A third added, “Taking a photo of someone else’s screen on a plane? Legal. Flying on a plane with COVID? Probably also legal. Both are bulls*** narcissistic behaviors.”

However, there were a few that stepped in in defense of the poster.

One commented: “F*** people who KNOW they have Covid that don't take precautions to keep other people safe from it.”

“Expose her to the flight attendant. See something, say something,” agreed another.