Emma Roberts gave fans a glimpse at her growing baby bump by sharing a swimsuit selfie on Labor Day. Scroll on to see the fashionable snap. 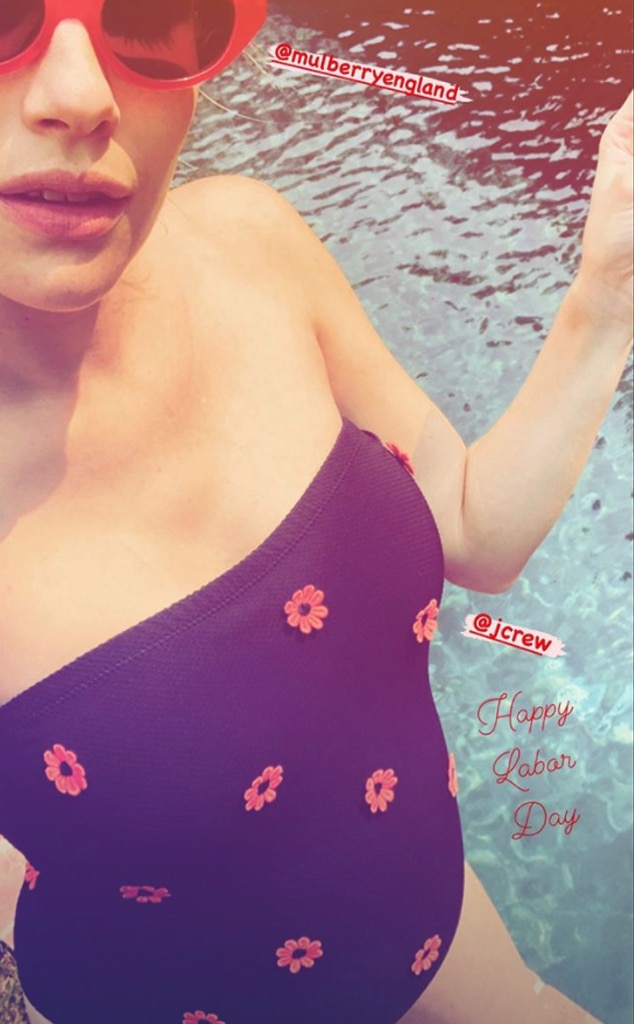 Emma Roberts is one fashionable mama-to-be.

The 29-year-old actress gave fans a glimpse at her growing baby bump by posting a swimsuit selfie to Instagram on Monday, Sept. 7. The Scream Queens star wore a floral-patterned one-piece by J.Crew and accessorized her summer style with red Mulberry sunglasses.

Roberts also posted a photo of her outfit of the day on Tuesday, Sept. 8. Sticking with the floral theme, the American Horror Story celebrity rocked a pretty pink Klements dress and added an Akris bag, Dior shoes and the same Mulberry sunnies to complete the look.

Roberts confirmed last week that she's expecting her first child, a baby boy, with Garrett Hedlund. "Me…and my two favorite guys," she captioned photos of herself cradling her baby bump and smiling alongside the 36-year-old actor.

The big news came about two months after reports had spread that Roberts is expecting a bundle of joy.

Her mom, Kelly Cunningham, seemingly confirmed the rumors at the time by responding to a few fans' congratulatory messages.

For instance, when one commenter asked if Roberts is pregnant, Cunningham reportedly replied, "Yes!!"

Roberts and Hedlund first sparked romance rumors in the spring of 2019. While a source told E! News at the time the duo had "gone on a few casual dates" and were "exploring a relationship," they soon proved their romance was much more serious.

Before dating Hedlund, Roberts was in a longtime relationship with Evan Peters. However, a source told E! News Roberts and the 33-year-old actor "broke off their engagement" shortly after Valentine's Day last year.