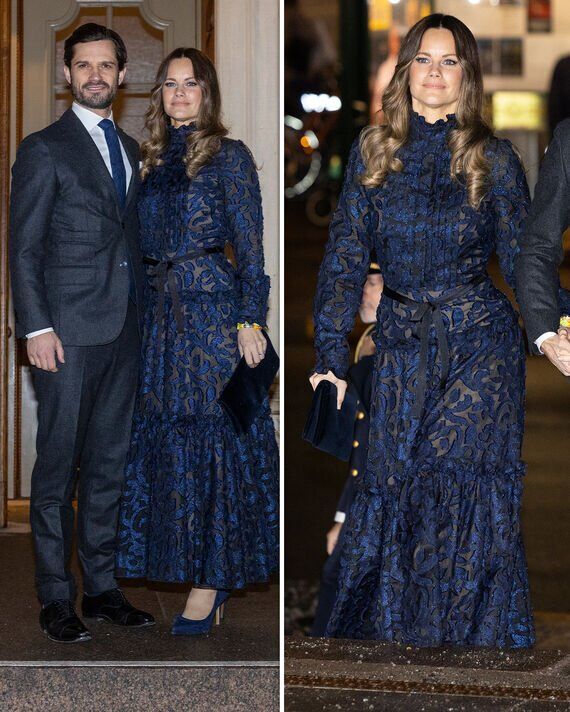 Prince Carl Philip and Princess Sofia of Sweden were photographed at Gustaf Vasa Church enjoying a Christmas concert with the rest of the Royal Family. Sofia looked beautiful and very elegant in a shimmery navy dress.

The royal combined the dress with a navy clutch bag and matching heels, kept her long hair loose and styled it in subtle waves.

For make-up, Sofia opted for a soft glam look with a smokey eye, and her husband Prince Carl Philip matched her outfit wearing a navy suit and blue tie.

Another royal fan, @soudabeh115, said Prince Carl Philip is a very “handsome Prince” and they are a “lovely couple”.

The dress that the Swedish royal chose for the Christmassy occasion is very similar to the one Meghan Markle wore in 2019.

The Duchess of Sussex, who was then pregnant with Archie, attended the Cirque du Soleil premiere of “TOTEM” with Prince Harry at the Royal Albert Hall, in London.

Meghan’s dress, however, featured a bateau neck and she opted for heeled sandals instead of suede pumps despite the performance taking place in January.

The gown, which retailed for £3,400 back then, was very similar to an iconic sparkly gown Princess Diana wore in 1986.

Princess Sofia and Prince Carl Philip met at a nightclub in Sweden after being introduced by a mutual friend, a meeting that the couple later described as “love at first sight”.

A year later, they moved in together in Djurgården Palace, in Stockholm, and they announced their engagement in 2014.

Princess Sofia and Prince Carl Philip married at Slottskyrkan, in Stockholm, the following year and they now have three children: Prince Julian of Sweden, Prince Alexander, Duke of Södermanland and Prince Gabriel, Duke of Dalarna.

Before joining the Royal Family, Sofia was a model and participated in various reality TV shows in Sweden.

Fashion expert Melita Latham commented on her drastic change from a reality TV celebrity to a sophisticated Princess: “From tattooed bikini model to real life Princess, and nothing shows this more than her remarkable dress transformation.

“It is clear that whilst she has been able to keep some aspects of her youth and personality, her dress, or rather her ability to dress as she once did, is clearly long gone.

“Gone are the short figure hugging mini dresses, once worn in the hope of finding fame, replaced with the conformity that typifies royal life.

“Indeed the Swedish Royal Family, allow very little in the way of ‘personal style’, and is reported to be one of the strictest in terms of formality, occasion and dress.”