IT could be coming home for England this year, and with their good looks and super fit bodies we don’t mind either!

England footballer Raheem Sterling came first on being the most attractive for the England team in a study that rates beauty using mathematical formula dating back centuries, and Jack Grealish followed closely by scoring top marks for near perfect eyes, nose and face symmetry. 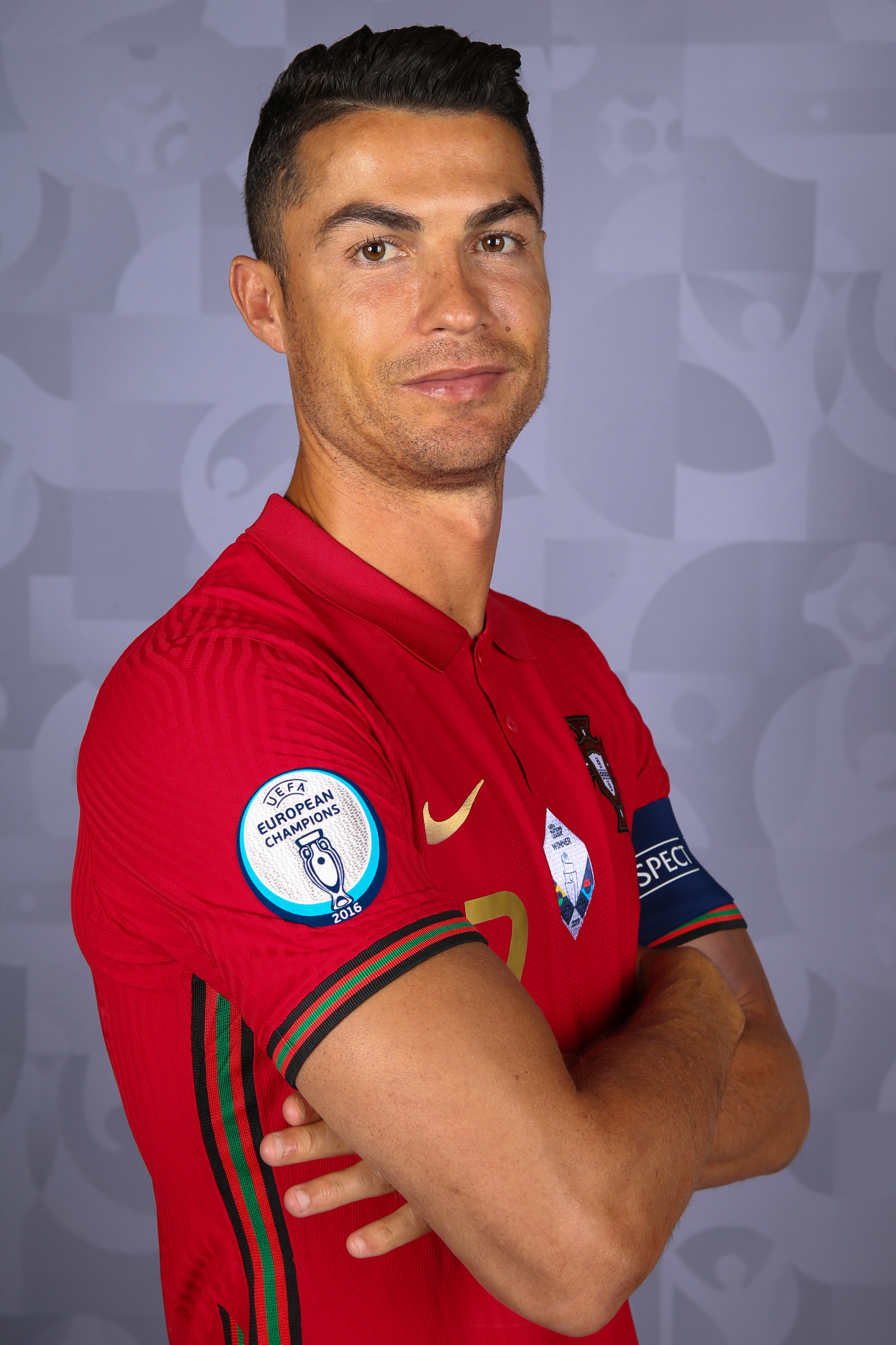 However, France came top of the league with footballer Paul Pogba having the overall highest marks for the ‘most attractive’ face, according to the Golden Ratio.

Creative geniuses have used the theory to sculpt, build and paint beautiful works of art throughout history. Leonardo Da Vinci employed it in his masterpieces the Mona Lisa, Last Supper and the Vitruvian Man.

Known as the Divine Proportion, and originally set out by the ancient Greeks, it is commonly found in nature, from flowers to shells. 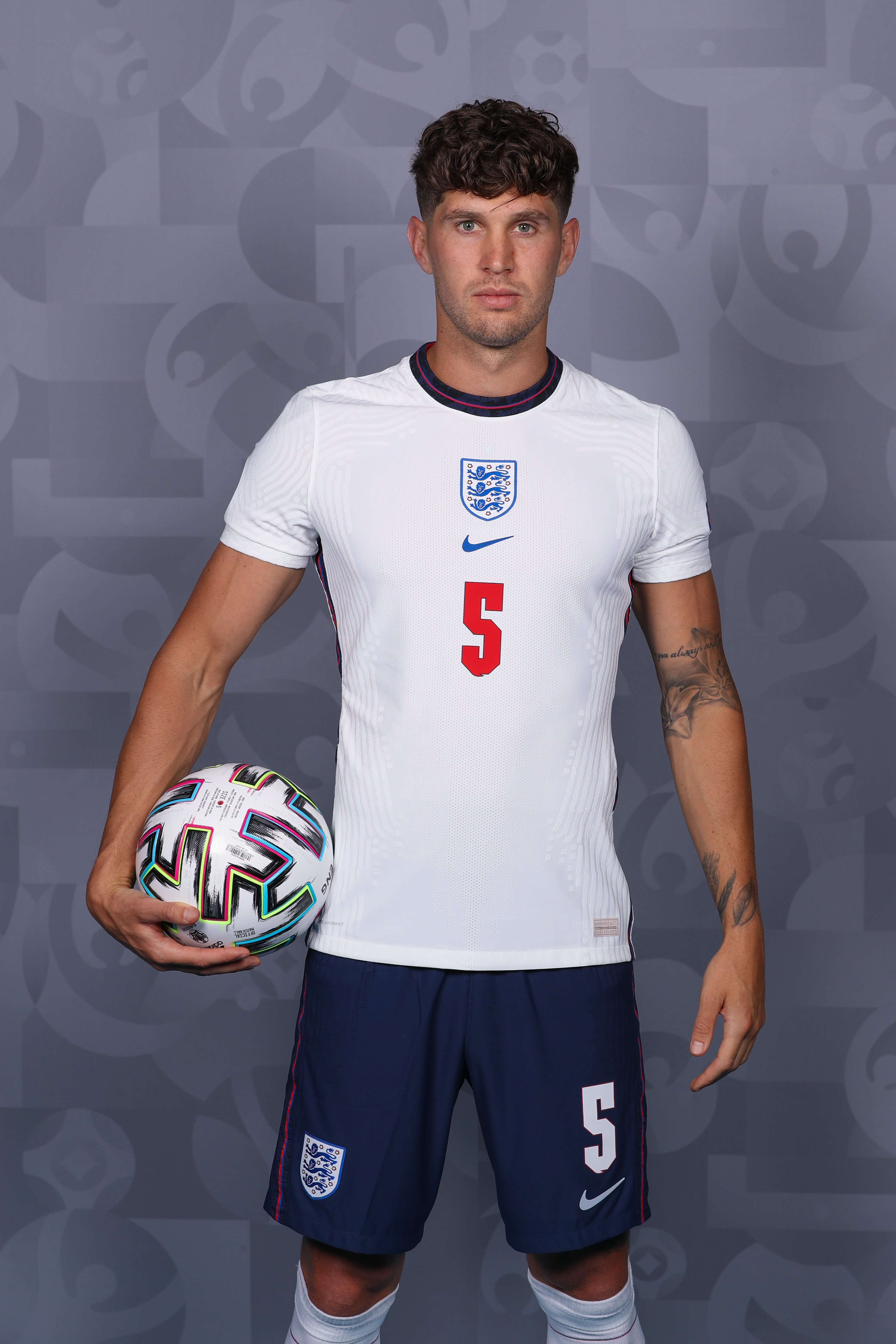 Now Dr Ross Perry, an aesthetic and Medical Director of Cosmedics UK based in London’s Harley Street, has combined the age-old theory with the latest in hi-tech computerised mapping to calculate the symmetry of famous faces.

He says: “In terms of overall facial symmetry Grealish scores the highest, just piping Sterling to the post – despite his golden Ratio being slightly less than others.

“This means the golden ratio is not always on its own a sign which determines overall attractiveness.

“Pogba and Ronaldo were also high scorers in terms of Golden Ratio.

“The Golden Ratio (also known as Phi) is the mathematical algorithm that underlies our perception of ‘attractiveness’ and is approximately 1.62.

“This means a beautiful person's face is about one and half times longer than it is wide.

“Those closest to this number have shown they have countless instances of this ratio, proving that symmetry is a key factor in terms of good looks.

“If a face is in proportion, the human eye is likely to find a face more aesthetically pleasing because it can process it faster which causes our brain to feel happy.”

According to the theory, distances between the forehead and the centre of the eyes, the eyes to the bottom of the nose and nose to the edge of the chin should be equal. 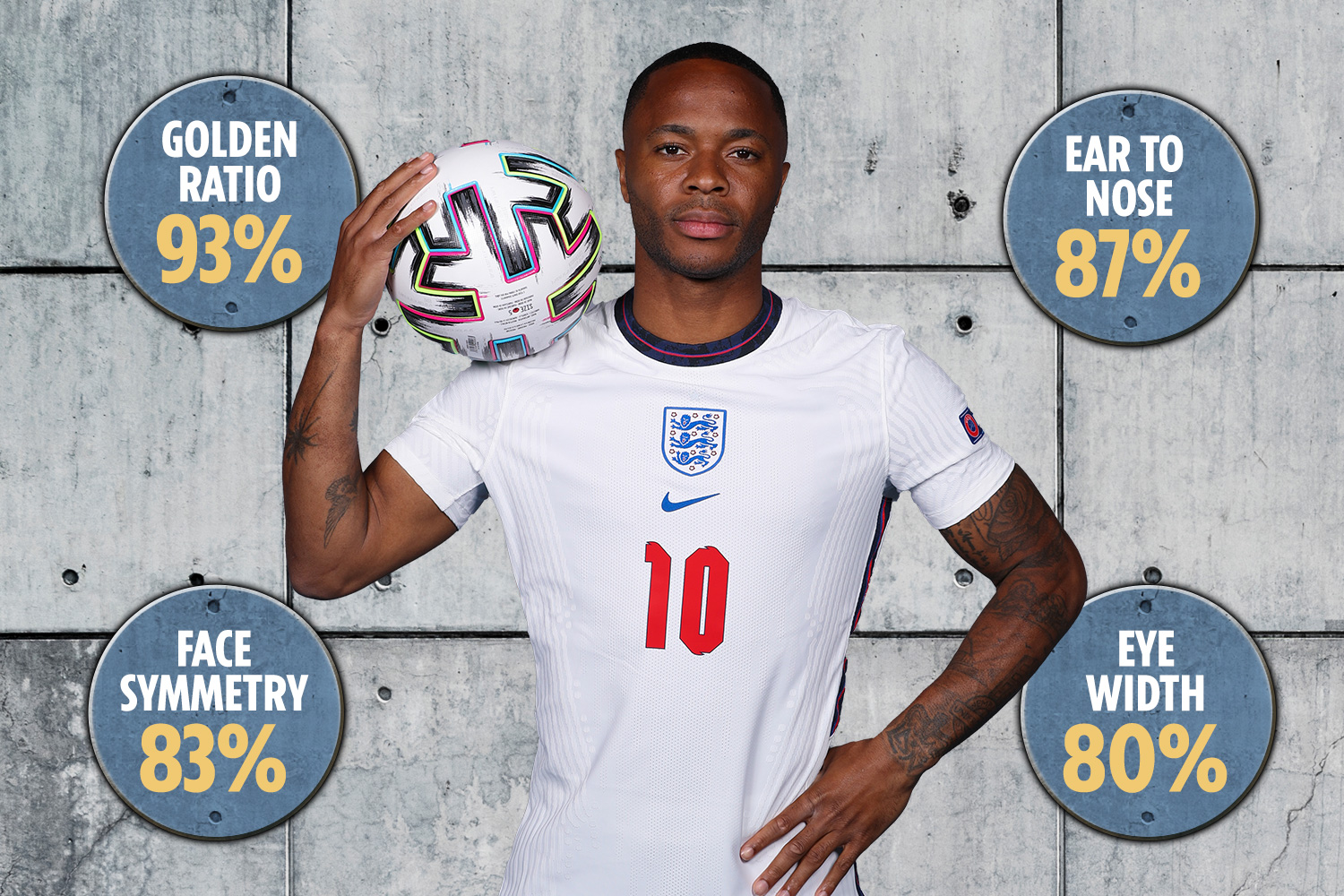 When it comes to winning the league for England, Raheem Sterling proves it’s not just the pitch he looks good on.

The 26-year-old Manchester City attacking midfielder’s face turned out to be a 93 per cent match to the classical ideal of beauty. 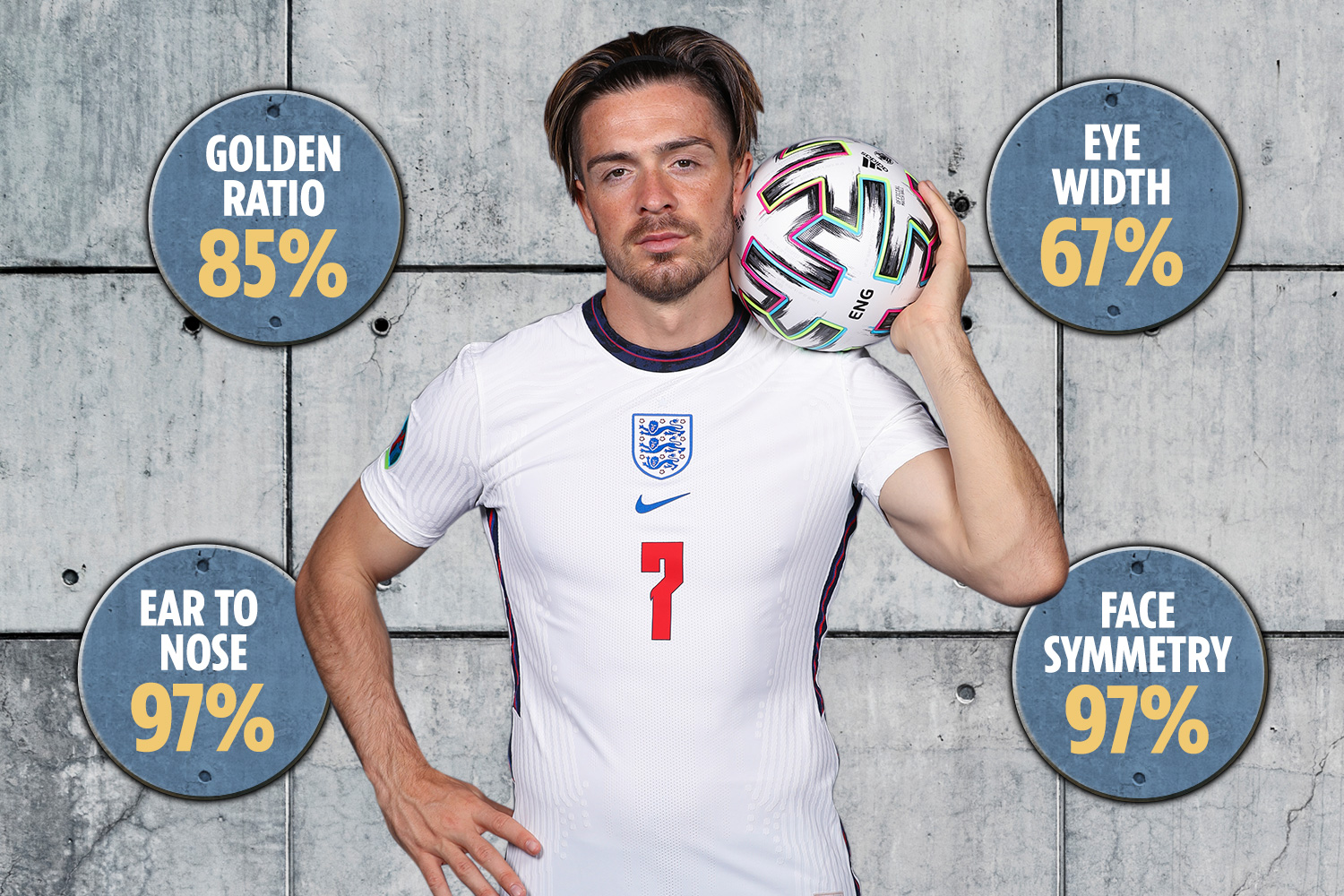 Noted for his ability to run and dribble past defenders, Jack Grealish’s good looks always keep the crowds drooling for more.

The 25-year-old Aston Villa attacking midfielder scored near perfect on his face symmetry and ear to nose ratio with 97 per cent.

Dr Ross Perry says: "His golden ratio is surprisingly low but his facial symmetry is almost perfect and this gives him classic, handsome looks which are seen as very attractive. He is also three per cent away from perfect." 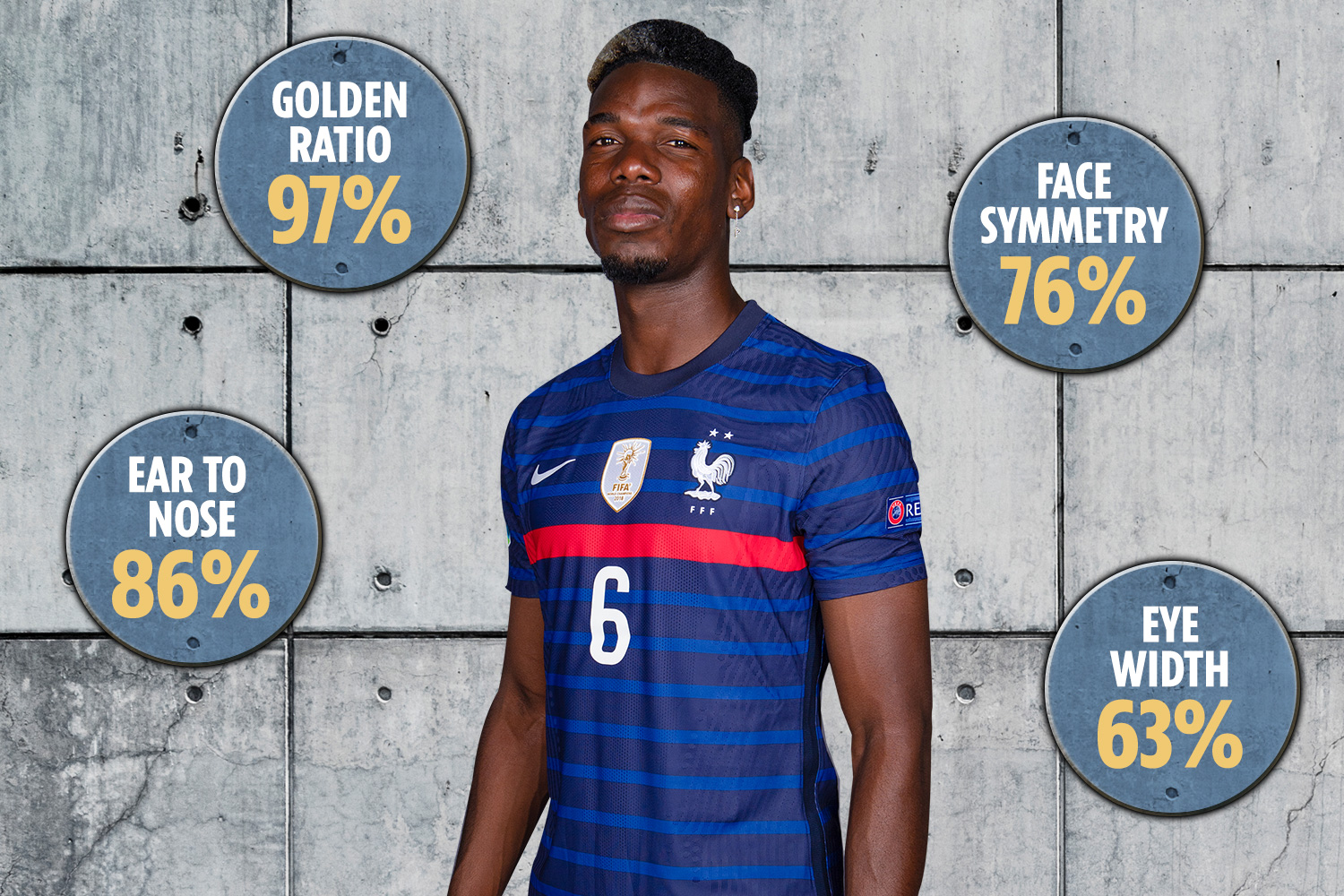 Jose Mourinho once claimed he was the best player on the pitch, and with these good looks it’s no wonder why Paul Pogba is one of the most famous players in the world.

The 28-year-old Manchester United central midfield, was captain of France’s U-20 team as they won the FIFA World Cup, and now he is the winner of good looks for them too.

Dr Ross Perry says: “His golden ratio is the highest as he is only three per cent away from the perfect golden ratio, however it’s his facial symmetry which lowers his score making him less attractive." 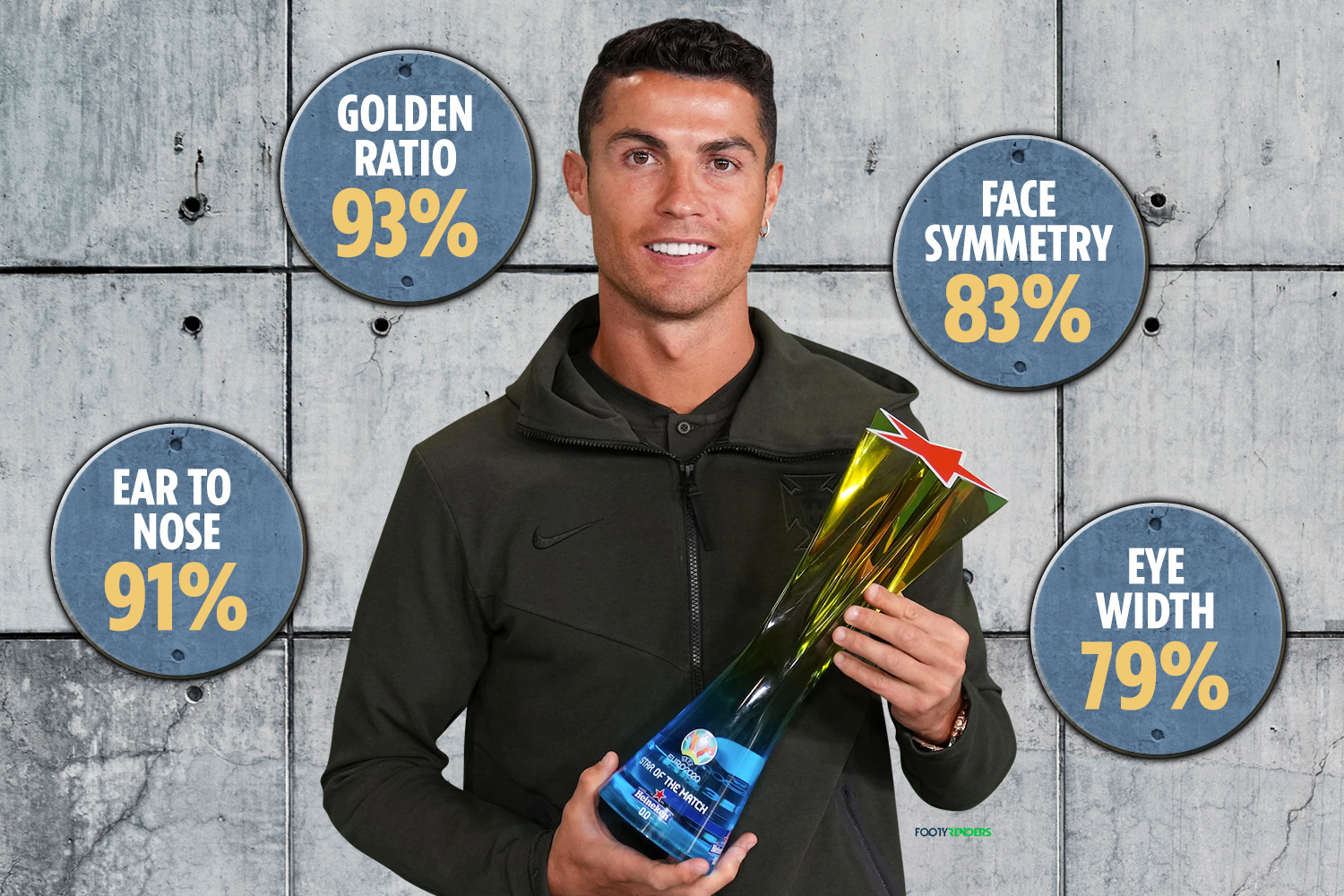 Cristiano Ronaldo has done what he knows best and rocketed to the top of the leaderboard.

The 36-year-old prolific goal scorer, who plays forward for Juventus and captains the Portugal team, proves he is always winning with a golden ratio of 93 per cent.

"His facial symmetry, ear to nose ratio and eye width proves he is very attractive looking." 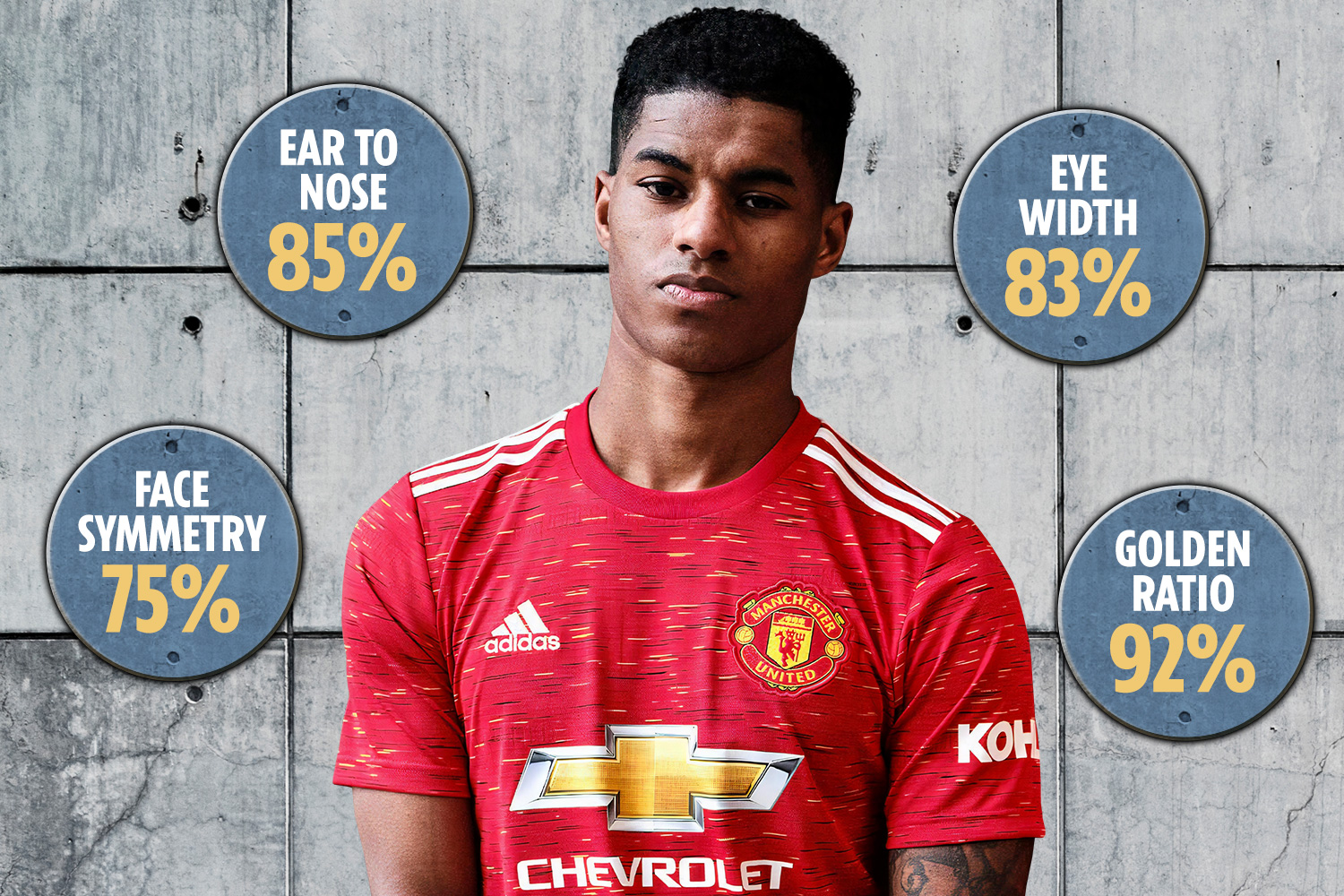 In 2016 he became the youngest English player to score in his first senior international match, and now aged only 23 he is scoring top marks on this leaderboard too.

Marcus Rashford plays forward for Manchester United and is only looking onwards with a face like his.

Dr Ross Perry says: “He is just eight per cent away from overall perfection, with his ear to nose ratio bringing his marks up particularly high and winning amongst his other teammates.” 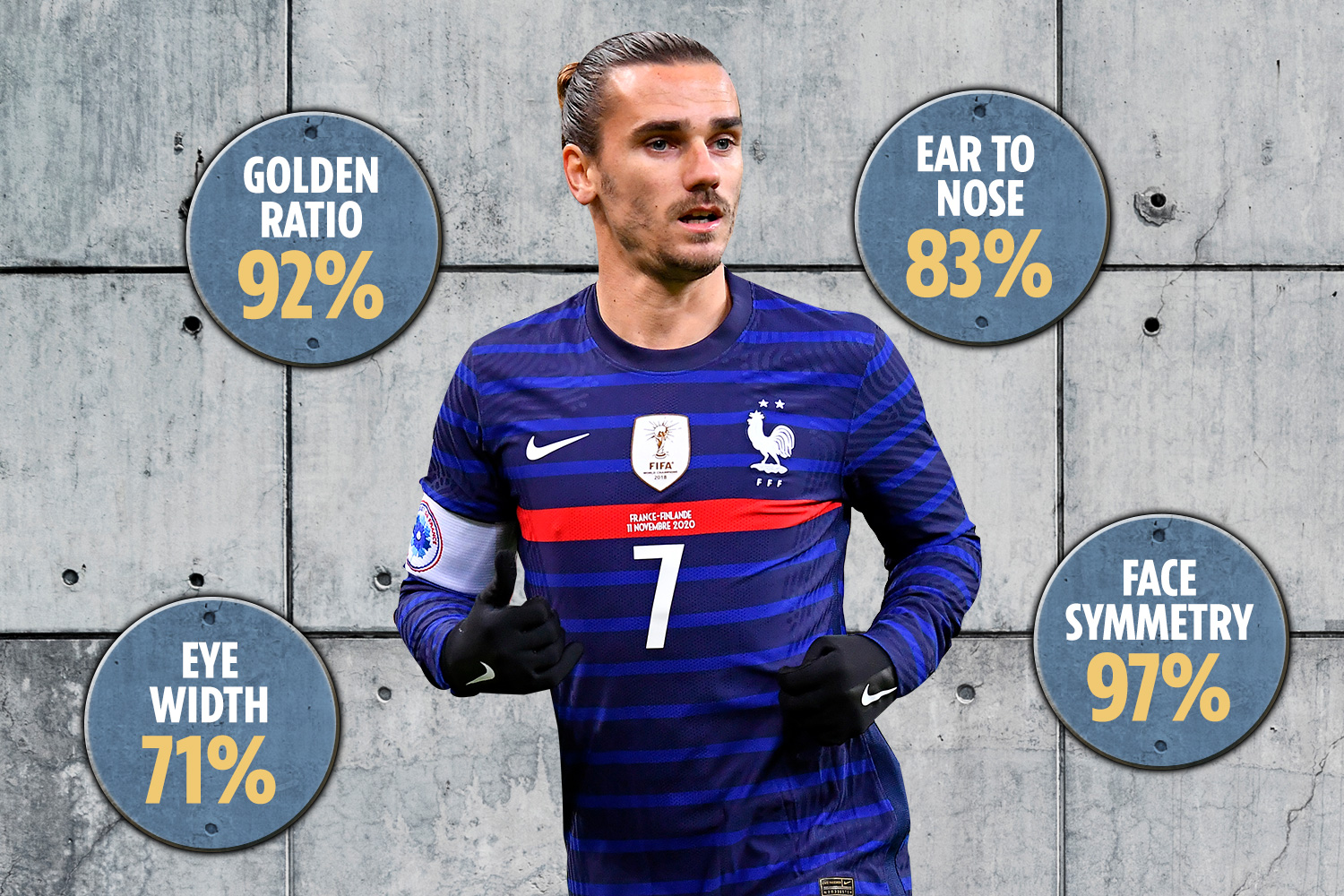 Following closely with his good looks on the French team, we now know why Antoince Griezmann earned his nickname as Le Petit Prince.

With a score of 92 per cent attractiveness and his quick legs, it’s no wonder why the 30-year-old, who also plays forward for Barcelona, is a charmer.

Dr Ross Perry says: "Griezmann has classic symmetry, and just three per cent away from perfect, in most areas of the face making him one of the most attractive in the list." 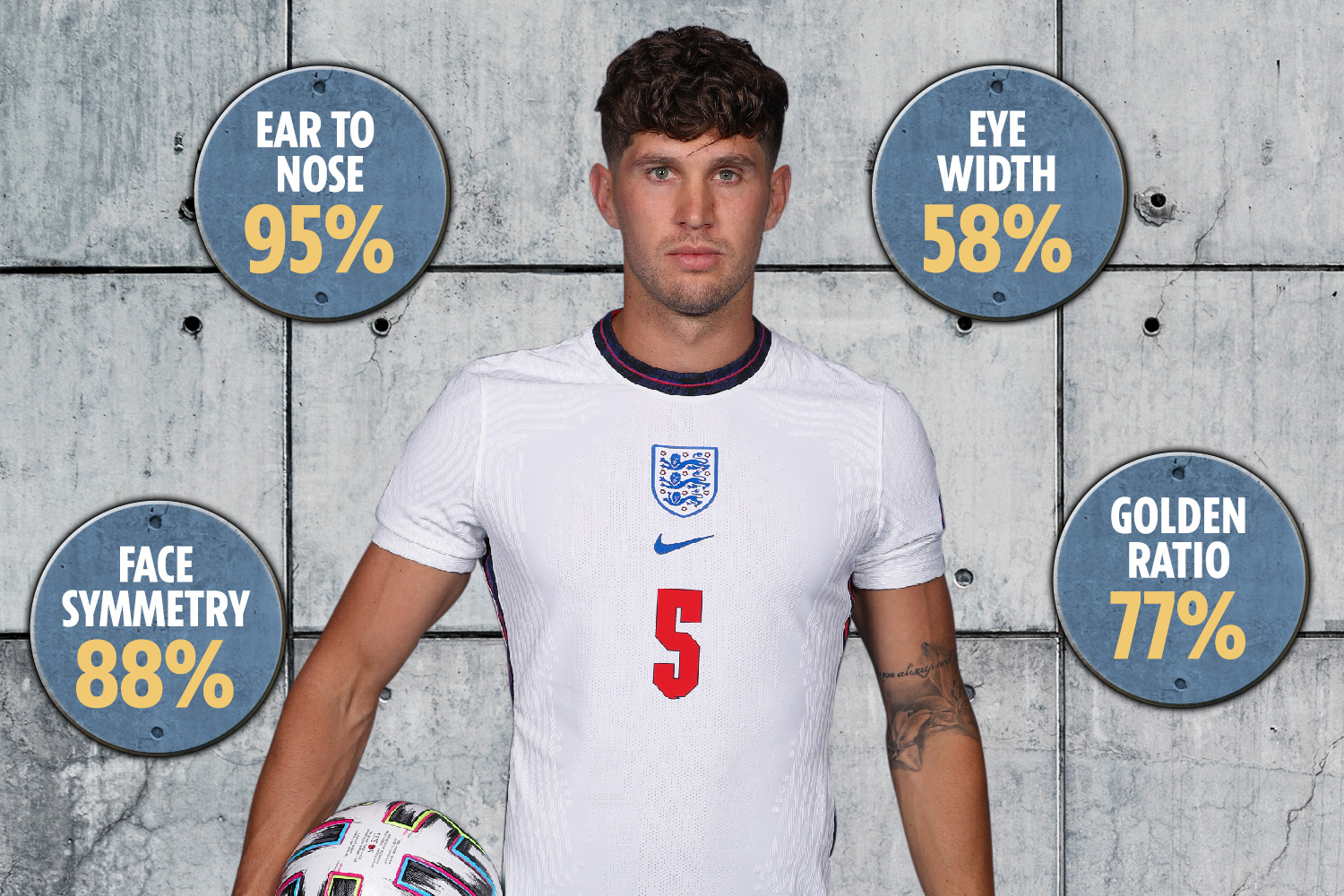 In the world of football John Stones sticks to centre-back in Manchester City and on our leaderboard he is just a “soft touch” away for having the perfect ear to nose ratio.

The 27-year-old doesn’t score as high as some of the other players, but he certainly makes up for it in other ways.

Dr Ross Perry says: "Stones has a lower golden ratio making him slightly less attractive than others, however, he does make up for it in other areas such as facial symmetry and ear to nose ratio of 95 per cent.” 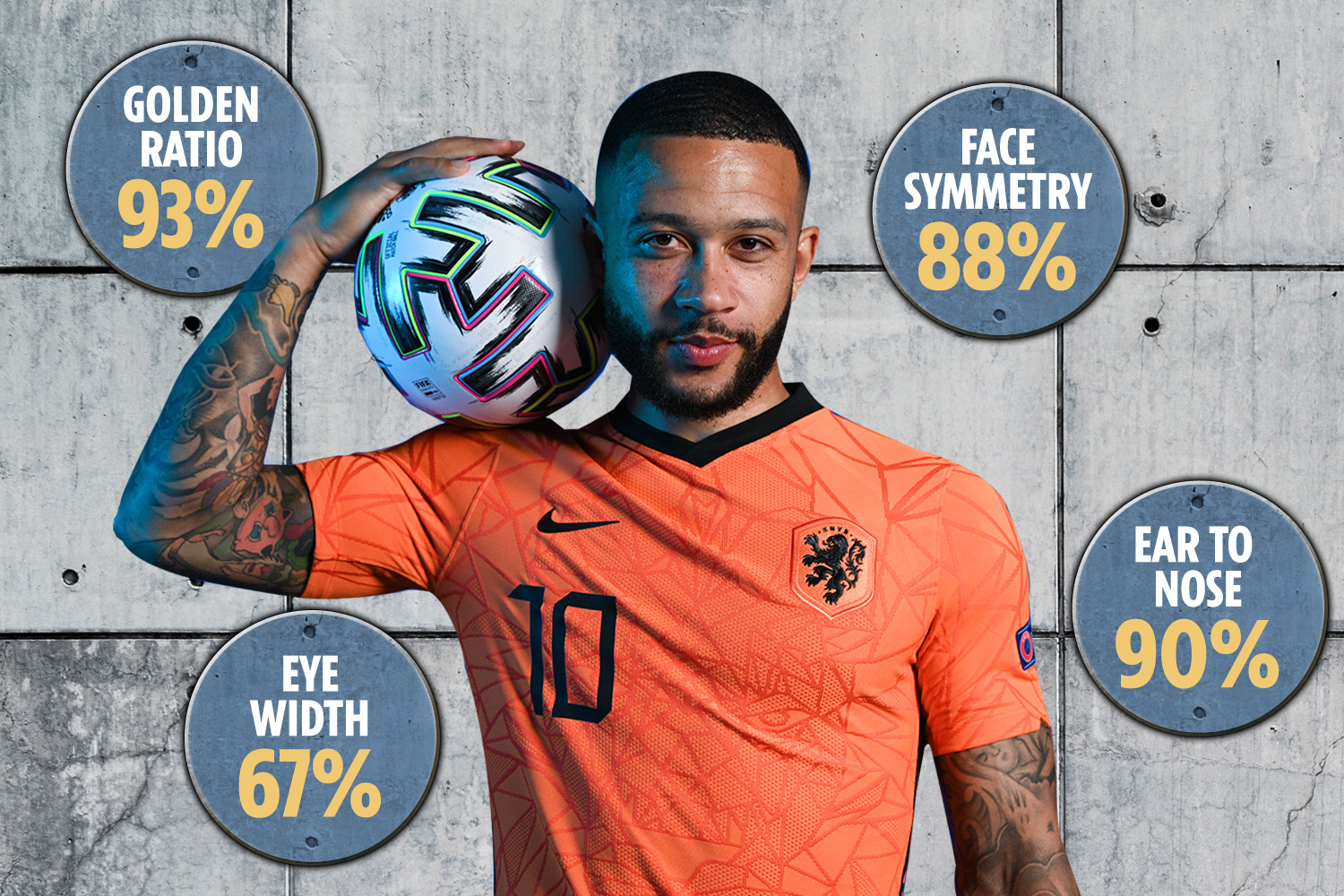 It's not just being a good team player Memphis Depay scores good at, but it’s facial symmetry too proving he is a real beauty.

The 27-year-old forward for Lyon and the Netherlands has a golden ratio to be proud of and that’s a plus for Barcelona who have just snatched him up.

Dr Ross Perry says: "Overall Memphis rates quite high in terms of golden ratio and facial symmetry given his overall high score with his facial features just seven per cent away from perfect." 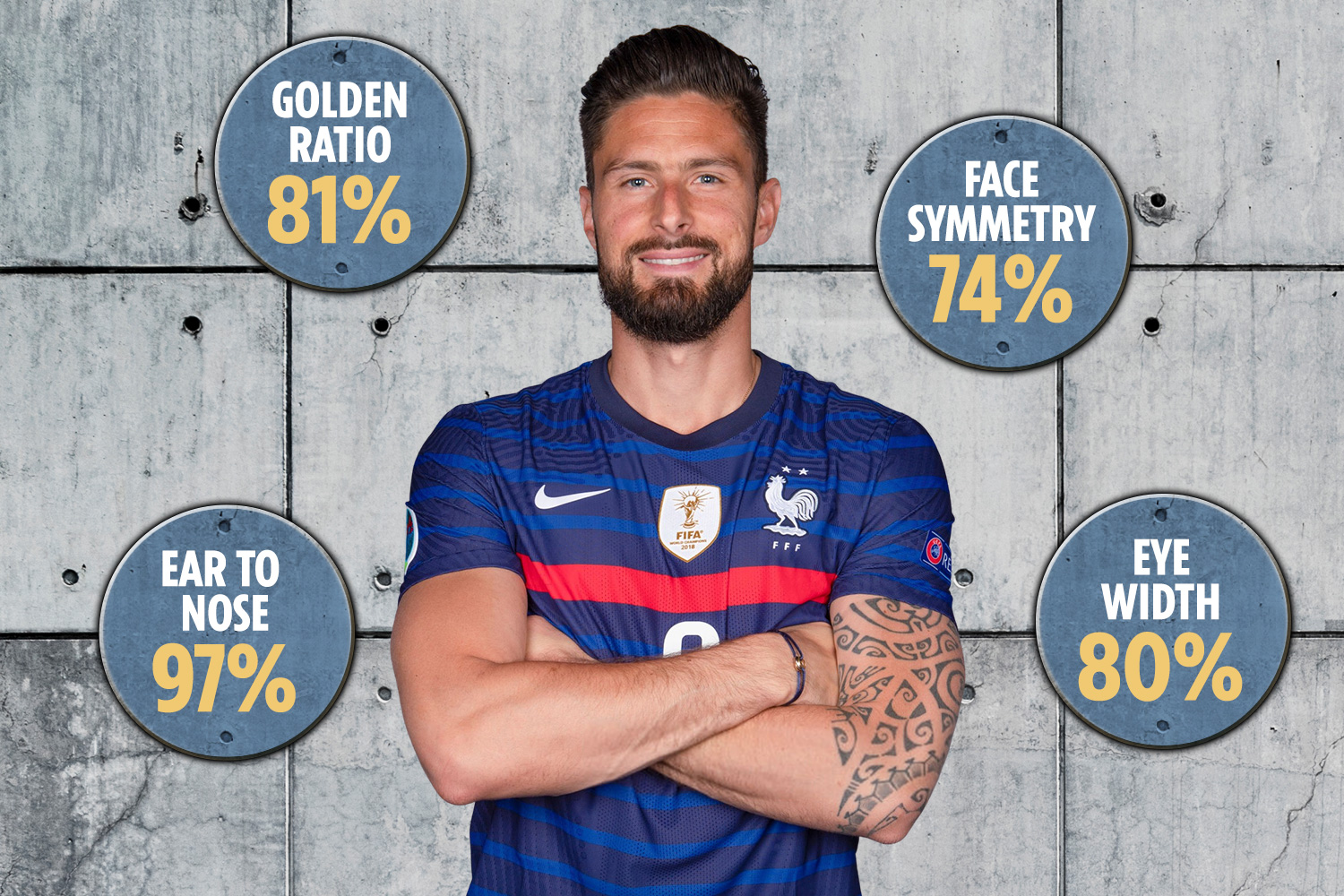 Highly regarded for his work-rate, strength, shot power and consistent goal-scoring ability, Olivier Giroud is often considered one of the most underrated strikers in the world.

However, with 97 per cent of ratio on his ears to nose and high scores for his eye width, the 34-year-old, who also plays forward for Chelsea, is definitely not a miss on our board. He has a league of his own.

Dr Ross Perry says: "Generally ok scores throughout, however his facial symmetry is what brings him down with 74 per cent. But with a nose like his, he should be proud." 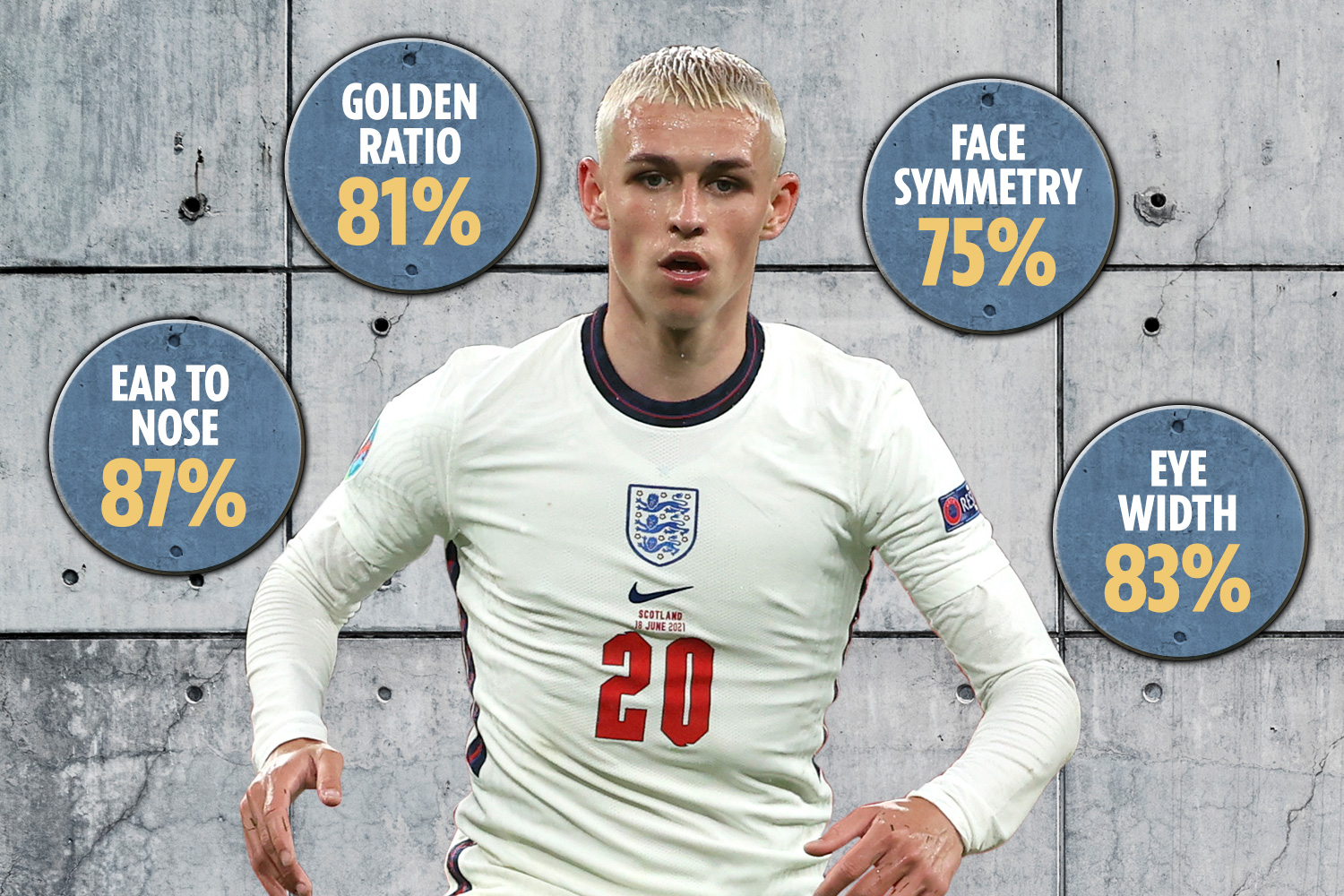 A top scorer on the pitch and off, which probably explains why he has a 2.2million following on Instagram.

Phil Foden, 21, who plays midfielder for Manchester City as well, has consistent marks throughout but is winning mostly with his ear to nose ratio.

Dr Ross Perry says: "Ok scores throughout but no real stand out feature which means he scored 81 per cent for overall golden ratio.” 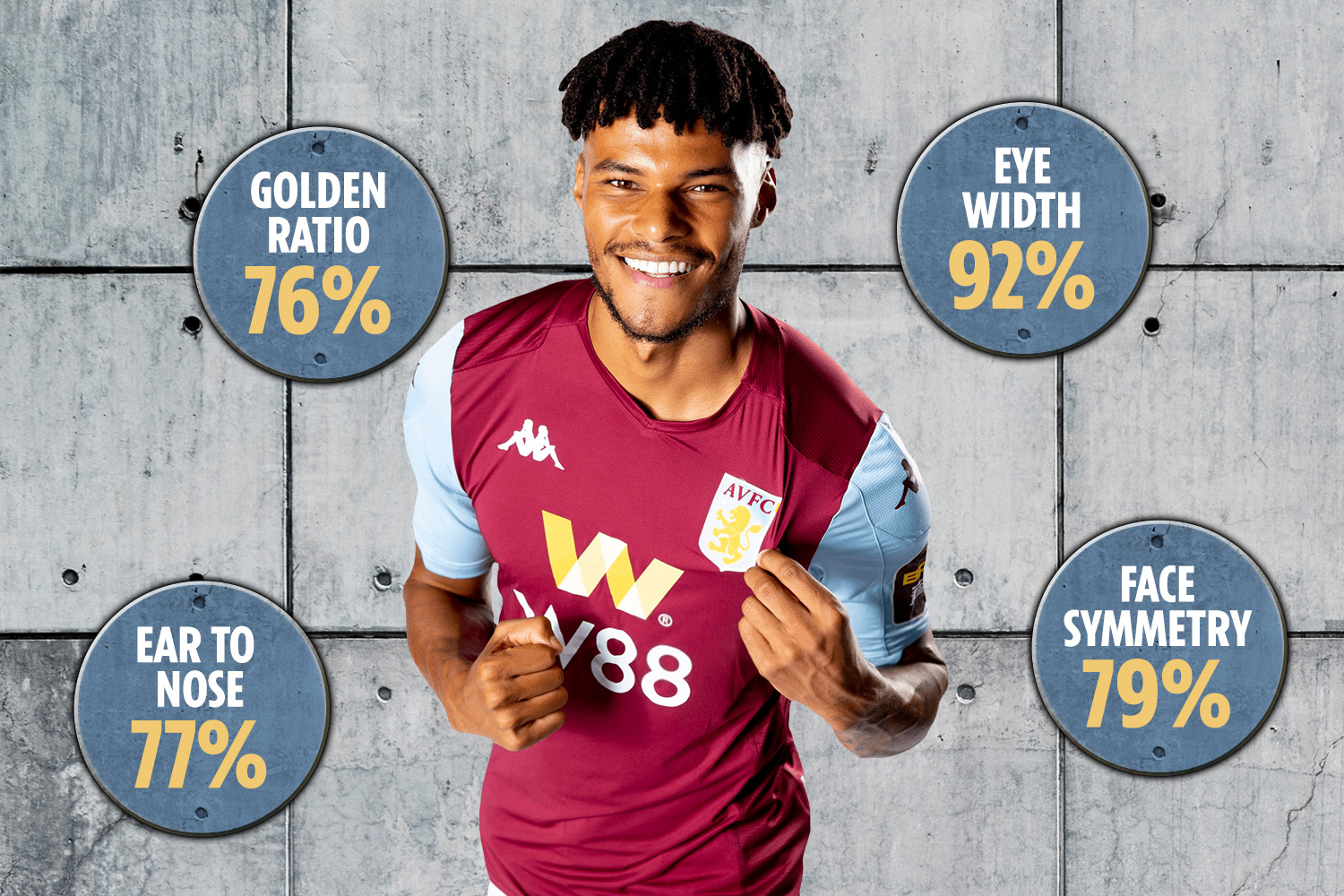 Gaining a nickname of Tyrolicious, Tyrone Mings, 28, who plays as a centre-back for Aston Villa and is helping England to ‘Come Home’ this year in the Euros, scores the highest for his eye width making him truly delicious.

Dr Ross Perry says: "Good scores throughout but it’s his eyes that draw the most attention.”

We shared how Anna Vakili is the Love Island girl with the most perfect bum, according to golden ratio.