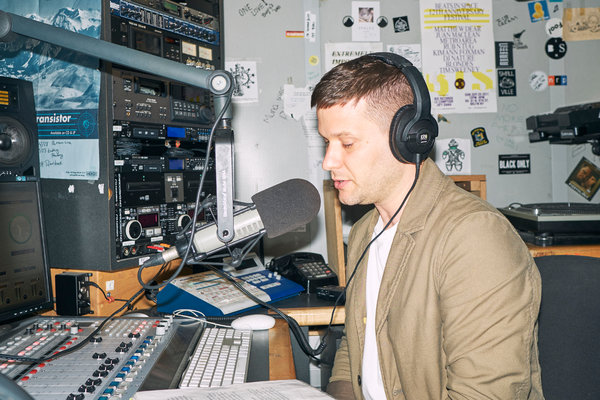 The radio host Tim Sweeney is a celebrity in the world of electronic music, and a virtual unknown everywhere else. He first came to prominence through his association with DFA Records (the home of LCD Soundsystem and the Rapture), and he is best known for his radio show, “Beats in Space,” which airs on WNYU-FM (89.1) every Tuesday night in New York City.

The show turns 20 this year. Over the course of its existence, underground electronic music has undergone a seismic shift. New music these days is less likely to bubble up through the clubs and record stores of New York. More often, it is blown in from abroad, pushed by a diffuse global scene. Mr. Sweeney and his show have managed to remain at the center of it.

We caught up with him to discuss his legacy and the future of “Beats in Space.”

Q.: It’s very difficult to define your taste; it’s basically underground electronic music. The name “Beats in Space” encapsulates it better than almost anything else could.

A.: You know, to be honest, I don’t really like the name anymore. I’ve kind of always wanted to change it.

When you got involved with the record label DFA, the opportunities for you started to change, and the radio show raised its profile. Is that right?

What doors did that open?

I remember specifically when I played this Carl Craig remix of Delia and Gavin, I remember DFA saying, “You can play it but you have to talk over it.” And so I talked over it on the radio. And, you know, it really blew up. People were really upset that I was talking over it. But I finally saw that I could have an influence that was spreading worldwide.

You saw what it meant to break a record.

Yes, exactly. And nowadays, you can play a record on the radio show. And then the rare record, you’ll see on Discogs, the value of it will have gone up. Everyone will, like, snap it up.

It seems like that would have been a natural exit ramp. I’ve never understood why the show kept going.

Especially now, as I’m getting older, I love radio even more. It’s still, I guess, inspiring for me, hearing new music. I always think I’m going to get bored of music, and that I’ve heard it all, you know? But there’s just always something that comes in, old or new, and you just kind of ask, what is that? And it triggers you wanting to find out more.

What is it you like about radio as a music discovery device?

It’s like getting passed this special present that you couldn’t hear everywhere. That idea of someone either turning on the radio in the car, or they’re at home, and they turn on the radio at home, and, you know, they’re just flicking through channels trying to find something, and they turn this on. And they’re just kind of like, What is this? And then they just keep listening.

Jonah Bromwich is based in New York. He writes for the Style section. @jonesieman