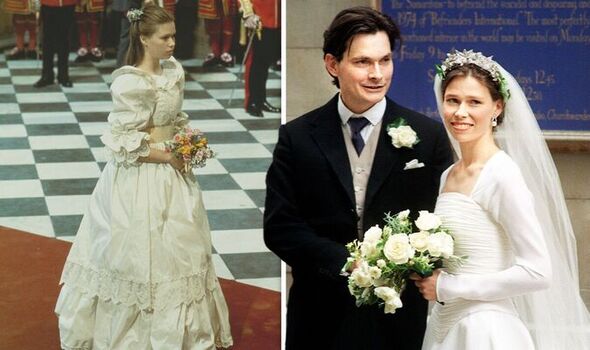 Princess Diana’s wedding dress is one of the most famous in history, and it embraced 1980s fashion to a T. Designed by David and Elizabeth Emanuel, the dress had a huge ruffled skirt topped off with puffed sleeves and a dramatic long veil, and it perfectly matched her bridesmaids’ outfits.

As Princess Margaret’s only daughter, Sarah was the oldest bridesmaid at Princess Diana’s wedding.

She wore a smaller-scale version of Diana’s gown with a cream sash around the waist but a slightly less voluminous skirt.

Sarah carried a small bouquet of flowers, and her hair was styled with more fresh blooms.

While Sarah certainly pulled off the ruffled gown, she opted for a much different design when she tied in the knot herself in 1994.

Lady Sarah’s wedding dress was designed by Jasper Conran and it featured a sleek silhouette rather than a puffy one.

Sarah’s gown showed off a corseted bodice with long sleeves, and her A-line skirt gently draped to the floor.

However, there were some similarities between Diana’s wedding outfit and Sarah’s.

Like Sarah had matched Diana’s dress at her 1981 wedding, Sarah’s three bridesmaids also wore similar gowns to the bride.

Sarah also opted to wear a family tiara rather than borrow one from the Queen’s collection for her foray down the aisle, just like Diana did.

Diana wore the Spencer Tiara which belonged to her aristocratic family.

Sarah wore the Snowdon Floral Tiara which had been gifted by her father Earl Snowdon to Princess Margaret in brooch form to mark their wedding day in 1960.

The tiara is made up of three detachable brooches which Sarah has worn on multiple royal occasions in the past.

Jeweller Wartski was thought to have been tasked with creating the tiara especially for Sarah’s wedding day.

The tiara held Sarah’s long veil in place, and it was interwoven with flowers for a more whimsical look.

Sarah’s wedding was much lower-key than other royal nuptials because she was not a working member of the Royal Family.

Sarah works as an artist, but she is often pictured at events with extended members of the Royal Family.

The late Queen was known to be close to her niece, and at her funeral this year Sarah honoured her by wearing the Snowdon Floral Brooches.