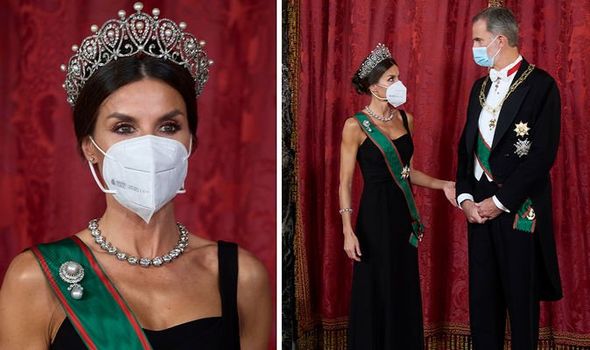 Queen Letizia of Spain, along with her husband King Felipe VI, hosted a gala dinner at Madrid’s Royal Palace during the Italian President Sergio Mattarella’s state visit to Spain.

However, what impressed fans the most was the jewellery, as Queen Letizia was donning some breathtaking pieces.

She combined the stunning tiara with Queen Sofia’s grey pearl brooch as well as pair of small stud earrings and a diamond necklace.

The necklace was a wedding gift from King Alfonso XIII to his new bride.

The brooch Queen Letizia was wearing featured a big central grey pearl surrounded by two clusters of diamonds and a pear-shaped pearl pendant.

She was also wearing the Grand Cross of the Order of Merit of the Italian Republic.

The Queen Maria Christina’s tiara was reportedly made by jeweller Cartier for Archduchess Maria Christina of Austria as a wedding present when she married King Alfonso XII of Spain.

The jewel has remained in the family ever since.

Claire Adler, founder of Claire Adler Luxury PR, who works with CEOs in the jewellery industry, commented on the gorgeous piece.

“Despite her mask, Queen Letizia looked stunning, while laden with opulent jewels last night including the glorious Cartier Diamond Loop Tiara fashioned from diamonds and pearls set in platinum.

“This tiara dates back to King Felipe’s great-great-grandmother, Queen Maria Cristina, the Austrian-born wife of King Alfonso XII who became a queen under dramatic circumstances.

“When Alfonso died, Maria Cristina was pregnant with the future King Alfonso XIII.

“For this reason, she was not only a queen consort but also a queen regent, because she effectively ruled Spain from her husband’s death until their son turned sixteen,” Claire explained.

Many fans took to social media to comment on Queen Letizia’s look.

Instagram user Heather Lwf said: “What about that necklace?!? It’s SPECTACULAR!!! She is so elegant and regal.”

Another user, Amy Clements, commented on Queen Letizia’s slim figure: “The dress is elegant, and the tiara & brooch are gorgeous, but what I really want is arms like Queen Letizia!