Sometimes, when life throws you a curve, it can be a golden opportunity. Jasmit Singh Rangr was happily settled in Manhattan, running Rangr Studio, the design practice he founded in 2004, when in 2014, his wife, Abigail Dillen, was offered a vice president’s job at her longtime employer, Earthjustice, that required moving to San Francisco.

“I loved being in New York,” Mr. Rangr said. But at least the move would allow the couple and their now-6-year-old son, Sher, to leave what he described as their “dismal little Upper West Side rental.”

Ms. Dillen — who is now the president of Earthjustice, a nonprofit that uses the court system to protect the environment — suggested looking in the Berkeley Hills. After going through the now-common experience of finding a house, only to be outbid by someone with lots of ready cash, the couple discovered a bank that would lend them the money to buy an empty lot (preferably one with a view, which would maximize resale value). Through a combination of dogged research and luck, they found property that they could buy for its appraised value rather than the market price. And on this steeply sloping site, Mr. Rangr designed a spare, light-filled house that measures 2,850 square feet, but takes maximum advantage of a view that includes the Bay Bridge, the Golden Gate Bridge and Mount Tamalpais in Marin County. He and his family moved in, in late 2016.

The multimillion-dollar view notwithstanding, the couple’s budget was tight, and Berkeley’s seismic and energy codes are strict. Mr. Rangr’s design manages these givens seamlessly. From the street, you see only the top floor of the three-story house. It contains an entry space with a powder room and a closet, and an open living-dining-kitchen space. The floor below contains a master bedroom, a child’s room and a guest room, as well as two bathrooms. The bottom floor, which is reached by an interior stairway and stone steps that lead down the hill from the entrance, contains Mr. Rangr’s office; its small open kitchen and a bathroom also make it suitable for guests or an au pair. 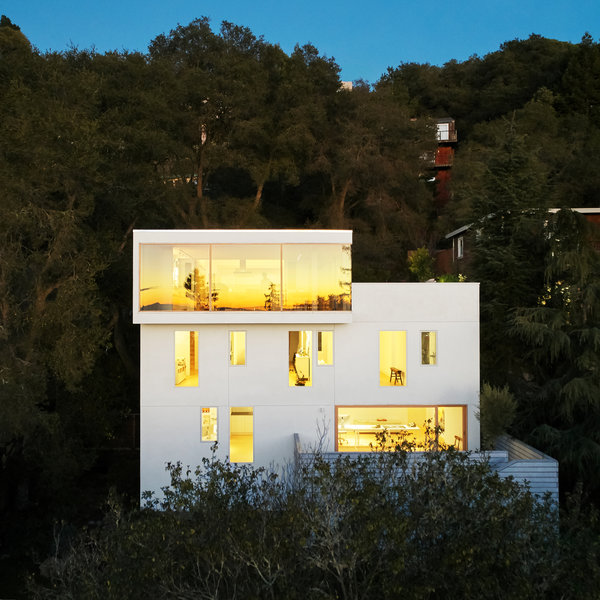 Mr. Rangr, who is fond of creating what he calls “inhabitable interstitial spaces,” conceived of the living area as a glass-enclosed version of a screened porch, inspired by the verandas of the houses his family occupied in India. (They moved to London when he was 8.) This glass box “captures the sun’s heat and makes us open the patio doors to cool the space off — at all times of the year,” he explained, eliminating the need for air-conditioning. The space is cantilevered to deepen its connection to the surrounding landscape and view. “At the front wall, you’re literally over air,” Mr. Rangr said. In addition, his use of three square, full-height windows on the west wall — rather than a single horizontal window — creates the sensation that the view extends beyond the frame. He needed to put people “not just in front of the view, but somehow in the view,” he said.

On the bright south side of the space, sliding glass doors open to a deck. Clerestory windows on the east (street) side of the house, above the kitchen, admit morning light and cooling breezes. The house has radiant-heated floors and LED lighting throughout, with indirect lighting used liberally; Mr. Rangr says it illuminates spaces more evenly, requiring less artificial light, and therefore less energy. Solar panels on the roof allow the building to consume just “one-third the energy that a house this size should use,” he said.

Mr. Rangr chose inexpensive materials, like a fire-rated stucco for the exterior, and Alaskan yellow cedar for the decks, windows and living room floors and ceiling. The lowest grade of wood “adds texture to the strict geometry of my designs,” he said; he used a whitening stain to neutralize its yellow tone. Notes and shopping lists can be written directly on the whiteboard laminate cabinet fronts. Relatively inexpensive subway tiles are in the bathrooms. And the living room bookshelves (wood, with aluminum standards) are from a company that makes laboratory storage components. While they are not flexible enough for frequent reconfiguring, “they have a very elegant bracket system,” Mr. Rangr said.

To make the house conform to the same high seismic standards as hospitals, he used state-of-the-art damper frame technology, working with ZFA Structural Engineers, a Northern California firm. The house is more likely to be habitable after an earthquake, and the technology minimizes damage to windows and finishes.

For her part, Ms. Dillen asked only for a spacious closet. “My skills are around the two-dimensional,” she said. “Jasmit’s sense of space is something I’d never mess with; that’s part of the reason I fell in love with him.”

Impressed by this house, Mr. Rangr’s aunt and uncle commissioned one for themselves nearby in Berkeley, and he is also at work on a mixed-use project in Buffalo, as well as a beach house in Costa Rica. Each embodies his belief that “the program, the client’s wants, and the landscape and climate dictate the design.”

“Eighty percent of the architecture is already there on the site; you just have to find the other 20 percent.”