Maybe at another time in human history I would have cared about the health benefits, but at this point, I’m like, what does “good for you” even mean? 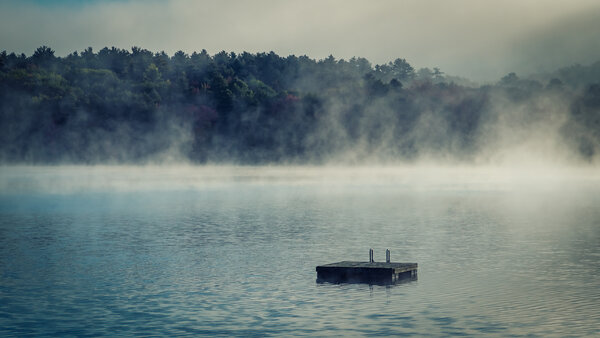 I’m standing with two friends in the 39-degree air on the edge of a lake in northeastern California in just our bathing suits. A lone fisherman in several layers of outerwear stares, drinks from a bottle of Racer Ale and says, “Tell me you ladies aren’t going in that water.”

We go in that water. It’s probably 56 degrees. It’s not the coldest water in the world currently being swum, not “My Octopus Teacher” cold — that guy swims in 48-degree water all the time, but hey, he’s in love with an octopus. What do you expect?

Still, it’s cold. I am always last, and I always scream the loudest. It is so cold, like jumping into a martini. The misery lasts about two minutes, and then you are just alone in a giant lake. Some people sneer at this lake for being man-made, but the water itself — pristine, cool, deep blue and tropically turquoise at its shallow edges — has no idea if the big hole it’s sitting in was dug by machines or by a glacier. It doesn’t know that the beach is ugly and covered with blasted rocks and studded with tree stumps. It’s just water, amazing water, fresh from the Sierra, and to have it to yourself is a pretty good return for agreeing to be uncomfortable for 90 or so seconds, before your heart just starts chugging away and a special, private warmth blooms inside you, as if E.T. himself were sitting on your heart, holding up his finger.

Daily swimming in really cold water began innocently enough, with daily swimming in warm water, which began, less innocently, with a drunk neighbor sideswiping my car and landing it in the shop. I started getting rides to the lake with the two friends in the summer, and on one of these pleasant summer swims they casually mentioned they had a regular habit of swimming, without wetsuits, until Thanksgiving.

Cold water swimming is in now, which is somewhat embarrassing for anyone who does it. People gush over the ponds at Hampstead Heath in winter, there’s the Octopus Guy and President-elect Joe Biden is known for taking Thanksgiving “polar plunges” in the waters off Nantucket, to say nothing of Wim Hof.

Wim Hof is this Dutch guy who not only swims a lot in cold water but calls himself a global health leader, which means that he has managed to parlay cold tolerance into a business that helps people do everything from kicking drugs to just generally not being unhappy. Gwyneth Paltrow’s “Goop Lab” on Netflix did a whole episode with Hof, which begins with him assuring teary Goop staffers that he can help them with their problems and culminates in the same staffers jumping into wintry Lake Tahoe, swimming to shore and proclaiming various states of healing. Granted, the water they were in was probably 43 degrees, but they were in for about 30 seconds. I am sure they felt exhilarated when they got out, but if I actually thought there was any permanent result from this exercise, believe me, I’d be driving the 90 minutes to Tahoe right now instead of writing this.

Indeed, the next person who asks me if I know about Wim Hof is going to get a swat. Still, whenever something is really popular and you start doing it just as it becomes popular, you must ask yourself: Am I, too, a lemming? Surely something led me to this moment other than just free will, an amazing personality and an exceptional ability to withstand discomfort, especially since I am confident I have an exceptional inability to withstand discomfort.

On the July day my friends told me they swum until Thanksgiving, I was like, no way. Then, on Aug. 17 the town where I live, Nevada City, had its fire, the Jones Fire, which was just the beginning of it all, of fire horrors that topped themselves every day. At two o’clock in the afternoon on Sept. 17, just hours after getting back from swimming during the short window where the air wasn’t too smoky for swimming, more smoke poured in, so much that the sun disappeared. It was nighttime in an instant. I looked at Twitter and saw that much of the West Coast was in the dark.

I thought that I was never going to swim with my friends again, which was ridiculous, because of course climate change doesn’t happen all at once. The horrors would recede, regroup and advance again with new strength, and there was no law saying we couldn’t go swimming through it all.

And before long we were back out there every day, in that beautiful water. It wasn’t so much that I planned on swimming into mid-November in a lake in Northern California at 3,017 feet, as I just kept going every single day and over time, the water kept getting colder and colder. It was around Oct. 26 where I started to feel that I was doing something unusual and brave and at times painful. My first thought every morning was resentment that my day had this big hard part in the middle of it. But even as the air and water got colder, it didn’t get worse, it got better. My body started to get used to it. The big hard part of my day became the best thing in it. My first thought every morning became “swimming.” And then I would just lie there smiling stupidly into the dark.

For the first minute in very cold water, your brain just goes on a vacation. (Cue several million people Googling “cold water near me.”) You are nothing except a body experiencing itself. I laugh at this stage, I laugh like my guts are going to fall out of my body, then scream. It’s so cold, and yes, that is hard. But it doesn’t last that long, and you can feel the unpleasantness of the cold melding with the pleasantness of it until it is all pleasantness, until all you feel is bliss.

Your skin is cold, but inside, you are warm, and safe-feeling, so that the cold is just a sensation, and not a misery. It’s unlike anything else I have ever felt in my entire life, and it is just a moment every day when I feel too good to remember that things are bad. And then, honestly, I spend the rest of the day recovering from it, not hyper-focusing on a million tasks, not being free from anxiety, not feeling ready to conquer things. I take a long bath and often fall asleep, and at some point manage to do the work required of me, but it’s basically a whole day lost to 20 minutes of extreme pleasure, and that’s fine with me.

The lake is not my source of strength or my fountain of youth. I swim in the cold water because it is feels good, and I will keep doing it for that reason, until one of us is no longer here.