Melbourne Cup champion Very Ellegant took just over three minutes to reach the finish post at Flemington but for this year’s Myer Fashions on Your Front Lawn winners, the journey to the prize stand has taken weeks.

Sydney’s Viera Macikova and Kalombo Ntuba swept the field on Oaks Day as best dressed man and woman, having waited since submitting photographs on October 16 to discover whether they had each received a package of prizes, valued at more than $90,000, including a Lexus car. 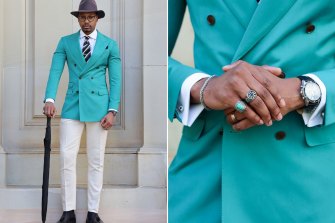 Second-time winner Ntuba, 31, took home the top men’s prize at the most recent Fashions on the Field competition in 2019, when entrants were required to compete in person at the Melbourne Cup Carnival. Lockdown conditions forced the 59-year-old competition to go digital, inviting contestants from around Australia to participate in Fashions on Your Front Lawn.

“It’s all slightly surreal,” Ntuba said. “The last time I won I was surrounded by people. This has been a different experience entirely. I am here on my own with cheeks that are sore from smiling.”

Melbourne’s reputation as the country’s fashion capital can be bolstered by the work of local designer Yohana Balibonera of YB tailoring, who created Ntuba’s striking double-breasted turquoise blazer. His matching ring was a $7 find at the Queen Victoria Market. “That $7 ring might have just helped me win my second Lexus.”

Born in the Congo and raised in South Africa, Ntuba attended his first horse race at the Melbourne Cup in 2018. The keen follower of fashion credits his winning style to flair inherited from his father and his skills as an accountant. 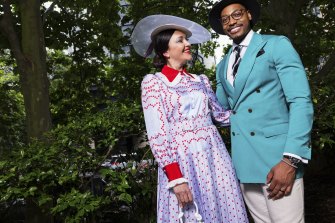 In a rebellious look straight from the runway, Viera Macikova joins second-time winner Kalombo Ntuba as winners of Myer Fashions on Your Front Lawn.Credit:Brook Mitchell

“I’m a numbers man, flying below the radar,” he said. “Winning is all about attention to detail. You need that as an accountant.”

Macikova’s work as a program manager in financial services had little impact on her winning outfit, purchased online when the designer dress from Rodarte, a favourite of Emma Stone, Beyonce and Kristen Stewart, was drastically reduced to $297.

“Entering competitions all started from my love of racing,” Macikova, 45, said. “Since then, I’ve won in Launceston, Wagga Wagga, Sydney and Brisbane but this is the big one.”

The majority of finalists from other states wore custom-made dresses they had designed but Macikova has noticed a slow shift in racewear towards looks inspired by the international runways.

“What is beginning to become obvious is that an outfit can no longer just be suited to the races. You have to be able to wear it again. I’m looking forward to wearing this out to lunch in Sydney to celebrate.” 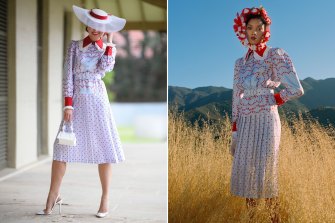 Fashions on Your Front Lawn womenswear winner in Rodarte and the dress featured in the US label’s spring 2021 campaign.

The dress, from Rodarte’s spring 2021 collection, would normally retail for four figures, but Macikova grounded her look with cheap plastic shoes from the back of her wardrobe and a sheer-brimmed hat from The Fillies Collection. “It was a struggle to pull everything together during lockdown, but we got there.”

In the lead up to the announcement of the winner, Macikova was immersed in racewear chat groups, worried that her long sleeves would upset traditionalists.

“It’s unconventional, but I wasn’t breaking any rules. The runway is important as an influence, but you will still never see me wear winter millinery in spring or open-toe shoes in winter.”

Both Macikova and Ntuba have won trips to next year’s Melbourne Cup and hope that the competition will return to its Fashions on The Field origins.

“It’s a real community,” Macikova said. “Some people dismiss racewear and fashion as superficial, but it transforms people and changes their personality. It makes them stand tall.”

“I have met so many amazing people,” Ntuba said. “I look forward to being inspired again. It’s a great opportunity to not dress like an accountant.”